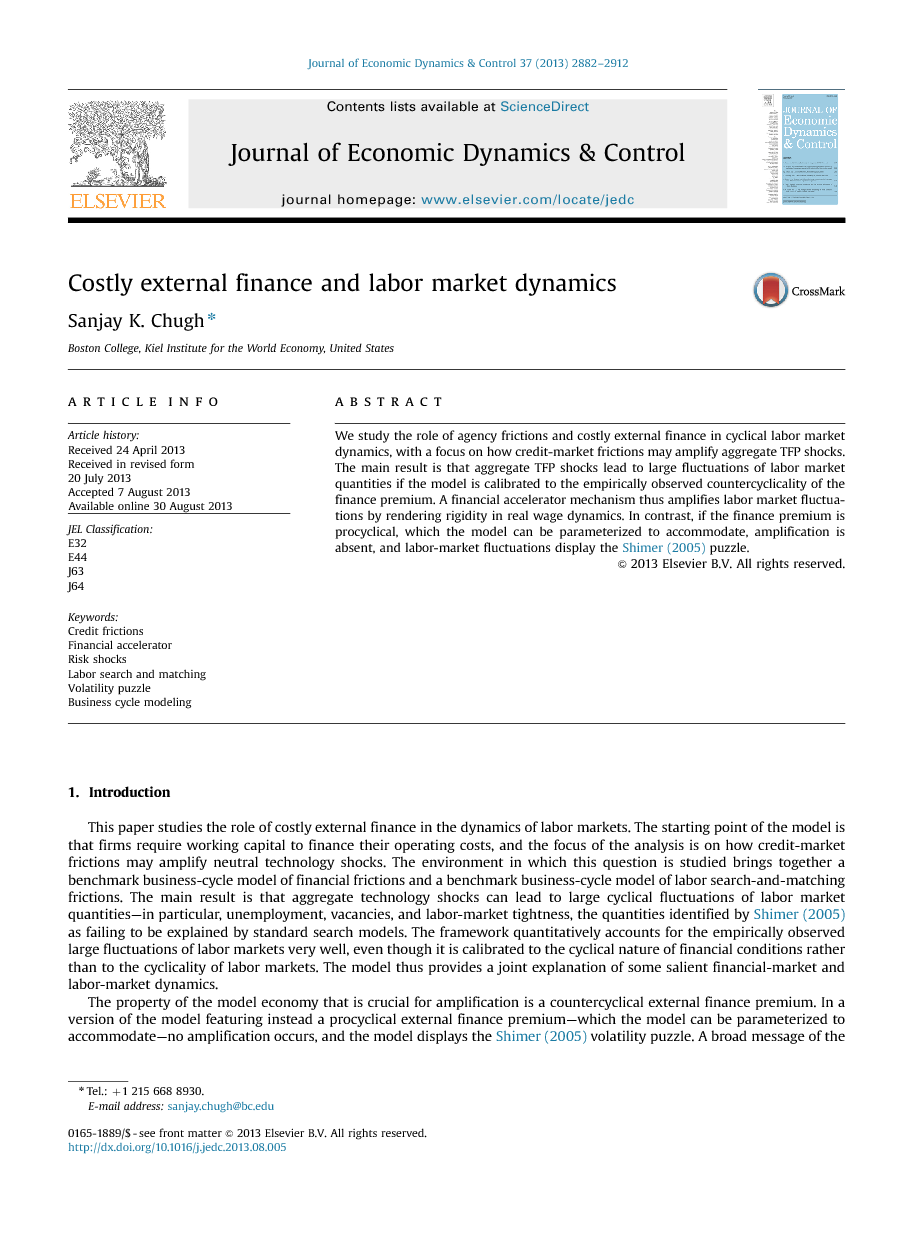 We study the role of agency frictions and costly external finance in cyclical labor market dynamics, with a focus on how credit-market frictions may amplify aggregate TFP shocks. The main result is that aggregate TFP shocks lead to large fluctuations of labor market quantities if the model is calibrated to the empirically observed countercyclicality of the finance premium. A financial accelerator mechanism thus amplifies labor market fluctuations by rendering rigidity in real wage dynamics. In contrast, if the finance premium is procyclical, which the model can be parameterized to accommodate, amplification is absent, and labor-market fluctuations display the Shimer (2005) puzzle.

We have developed a model in which shocks to aggregate TFP lead to large fluctuations in labor markets, and the amplification is mediated through financial conditions. The model performs well in quantitatively accounting for the volatility of vacancies, unemployment, and labor-market tightness, the quantities identified by Shimer (2005) as failing to be explained by standard search models. The key to the amplification is a countercyclical external finance premium driven by a positive spillover from aggregate TFP to firms' idiosyncratic productivity. Because of firms' financing needs, a countercyclical finance premium makes input costs cheaper during booms and more costly during recessions. This leads to much sharper swings in firm recruiting efforts over the business cycle, and thus much sharper swings in labor markets, than in standard search models of the labor market. Cyclical movements in financial conditions are responsible for 60 percent of the model's amplification, with the direct productivity effect of the spillover responsible for the other 40 percent. The key parameter of the model is the elasticity of the mean of firms' idiosyncratic productivity with respect to aggregate TFP. Firm-level empirical evidence suggests that this elasticity is positive, which is the direction of this relationship needed for the core mechanism of our model to operate. Premised on a positive elasticity, the numerical value for the elasticity is then selected to match the observed countercyclicality of the finance premium with respect to GDP. Thus, the model quantitatively matches labor-market volatility well even though the model is calibrated to the dynamics of financial conditions, not to the dynamics of labor markets. A number of extensions suggest themselves. One may be to allow for endogenous job separation, which has been known since den Haan et al. (2000) to potentially matter for many business-cycle issues. Our model performs well on the labor-market amplification dimension despite only exogenous separations, but a mechanism such as den Haan et al. (2000) or Fujita and Ramey (2007) may improve the model along the propagation dimension. Another extension would be to model credit-market frictions even more deeply, which is sure to be an active area of research in the coming years. Introducing other sources of variation besides just TFP shocks may allow for deeper connection with the rich firm-level evidence offered by studies such as Foster et al. (2008) and Petrin et al. (2011). Issues of fiscal and monetary policy are also likely to be interesting ones to explore in the type of framework we have developed. Perhaps most importantly, further empirical resolution on firm-level productivity and its correlation structure with aggregate shocks is needed. In our model, the elasticity of idiosyncratic productivity with respect to aggregate TFP is simply a parameter. Phenomena at the micro level for which it may stand in are, among others, selection effects in firm entry and exit and non-constant returns in production technologies. In a deeper micro-founded model, one would not want to label these phenomena “productivity,” even though in our representative-agent model they appear as such. Nonetheless, we view our model and results as suggesting that credit-market frictions may be an important driver of labor market fluctuations.