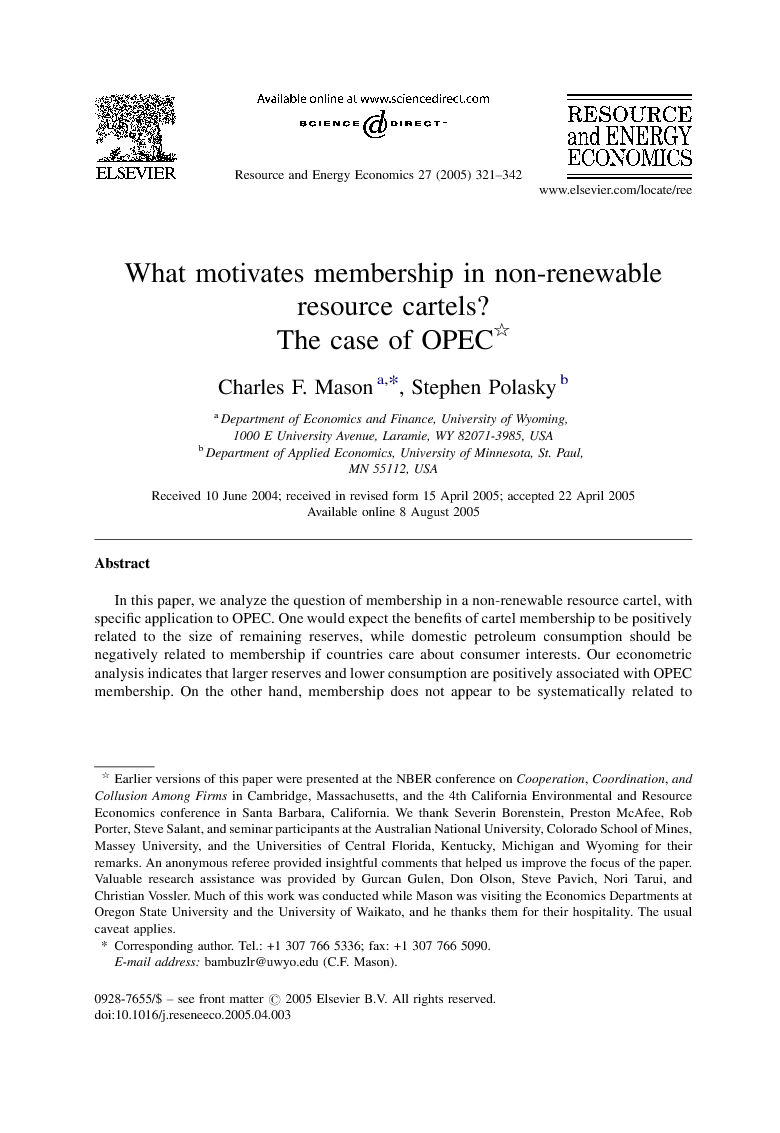 In this paper, we analyze the question of membership in a non-renewable resource cartel, with specific application to OPEC. One would expect the benefits of cartel membership to be positively related to the size of remaining reserves, while domestic petroleum consumption should be negatively related to membership if countries care about consumer interests. Our econometric analysis indicates that larger reserves and lower consumption are positively associated with OPEC membership. On the other hand, membership does not appear to be systematically related to countries’ religious makeup. Our regressions correctly predict membership for the vast majority of oil-producing countries.

The Organization of Petroleum Exporting Countries (OPEC) has been a major factor in the world oil market since the early 1970s. While the cartel appeared relatively ineffective from the late 1980s through much of the 1990s,1 recent events have again put OPEC in the spotlight. Production cutbacks by large oil producers helped increase oil prices from the US$ 10 per barrel range in early 1999 to over US$ 30 per barrel in 2000. Prices in early 2005 climbed over US$ 50 per barrel with virtually no spare production outside of OPEC to meet rising demand. OPEC continues to have regular meetings to discuss production quotas and pricing strategies. Further, its member countries own 69.3% of the world's proven reserves as of the beginning of 2005 (Oil and Gas Journal), approximately the same as the 69.8% figure they owned at the beginning of 1973. In light of long-term trends towards increasing world demand and limits on production capacity outside of OPEC, it is likely that the cartel will remain an important force in international oil markets. Hnyilicza and Pindyck (1976) and Pindyck (1978) argue that there are substantial gains to cartelization available to members of OPEC, potentially in the neighborhood of 50–100% of non-cooperative profit flows. In light of this observation, why does OPEC include less than one-fourth of all oil producing countries? In fact, a group of non-member countries were invited to attend OPEC meetings beginning in the late 1980s. These countries, referred to as “shadow OPEC,” were involved in discussion of production and pricing with OPEC member states. In March 1998, two members of shadow OPEC, Mexico and Norway, announced that they would limit their production at the same time that OPEC was doing so. Griffin and Xiong (1997) also find gains to cartelization. However, they also argue that member states have substantial incentives to defect. A cartel is a classic example of a prisoner's dilemma: all members are better off when all cooperate but each member does better by defecting. Given this incentive, why do countries remain in OPEC or adhere even partially to their quotas? Indeed, Ecuador dropped its membership in OPEC in 1992, the first such defection since the group was formed in 1960. More recently, Gabon also left the cartel. Since Ecuador and Gabon exited from the cartel without retribution, why don’t other OPEC members follow suit? The basic question these observations raise is: which producers have an incentive to join the cartel, or remain in it, and which producers do not? In this paper, we analyze the question of membership in a non-renewable resource cartel, focusing specifically on OPEC. In Section 2, we discuss examples of non-renewable resource cartels and the relevant literature on collusion in repeated and dynamic games. We use this discussion to motivate factors that should be related to membership in a non-renewable resource cartel. Specifically, we argue that the benefits of cartel membership are related to the distribution of proven reserves across potential members. In particular, firms with larger reserves are more likely to join, and then remain in, an exhaustible resource cartel. In Appendix A, we use a simple model of a non-renewable resource market to derive non-cooperative equilibrium and cartel outcomes to demonstrate these predictions. The predictions from this simple model corroborate the simulation results in Griffin and Xiong (1997) and the anecdotal evidence on domestic oil extraction provided by Wiggins and Libecap (1987). In Section 3, we use data on oil producing countries to see whether the predictions discussed in Section 2 are consistent with observed behavior. We find that the size of proven reserves is quite important in predicting membership in OPEC. We consider other potential explanatory variables, including annual oil consumption, political, and religious factors. To the extent that a country weighs consumer interests, and not just profits from the sale of petroleum, the amount of annual consumption should be negatively related to membership. The effect of consumption may be intertwined with the degree of political freedom within the country, since autocratic countries may not place as much weight on consumption as relatively free countries. We find some merit in these notions, in that autocratic countries with low consumption were more likely to belong to OPEC than either countries with high consumption or greater political freedom. A popular explanation of OPEC membership focuses on the role of Islam. However, we find that the percentage of a country's population that is Islamic does a relatively poor job of explaining OPEC membership. Section 4 analyses membership status when a third option is included—participation in shadow OPEC. This group consists of countries that attended OPEC meetings but who had no voting privileges. Results here mimic those from Section 3, in that proven reserves are consistently important in explaining participation in the cartel, be it as an explicit member or as a shadow OPEC country. We use the results of the regression analysis from this section to predict the probability of any given country being a member of OPEC or shadow OPEC. Our regression model correctly predicts the membership status of the vast majority of countries. Our results predict that the two countries that dropped out of OPEC during the last decade, Ecuador and Gabon, were not natural candidates for joining the cartel. In addition, our results suggest that one member of shadow OPEC (Angola) was a likely candidate for membership in the cartel, while three other members of shadow OPEC (Bahrain, Brunei, and Colombia) were likely candidates to drop out altogether. Concluding remarks are offered in Section 5.

In this paper, we proposed an economic rationale for determining which producers should be members of a non-renewable resource cartel, namely that membership should be positively related to reserve size. Using data on proven oil reserves, we tested this proposition for OPEC. Our results are largely corroborative of the theoretical point. In addition, membership in OPEC is negatively related to annual oil consumption within the country, which would indicate that (at least some) counties are concerned about the impact of higher oil prices upon domestic consumers. This effect would seem to be more important in those countries that are relatively democratic, as suggested by the slightly superior performance of our regressions using the polycon variable. Our analysis of the tri-chotomous choice – membership in OPEC, participation in shadow OPEC, or non-membership – produces surprisingly good predictions. Of the 85 countries included in the data set for 1997, only six are incorrectly placed. Two of these mis-matches represent the countries that dropped out of OPEC in the 1990s. The other four mis-matches represent members of shadow OPEC: Angola, which has a marginally higher probability of being an outright member of OPEC, and Bahrain, Brunei, and Colombia, who we predict should not be involved at all. Interestingly, these last three countries have recently stopped attending OPEC meetings. It should also be noted that this work has applications in other contexts besides non-renewable resources. Qualitatively similar results might emerge in declining industries, where demand is shrinking over time and producers have fixed, but different, capacities. Here, the pressures to dissolve the cartel come not from shrinking abilities to produce but rather from a reduced opportunity to sell. An interesting question here is whether larger producers will have the greater incentive to collude given that they will exit first in a non-cooperative setting (Ghemawat and Nalebuff, 1985). A second alternative application is to industries facing a finite horizon, say because of a pending regulatory change or a radical innovation. Again, it is the prospect of altered future demand that matters, not shrinking production possibilities. Our model may provide useful insights into patterns of collusive behavior in these applications as well as in non-renewable resource markets.