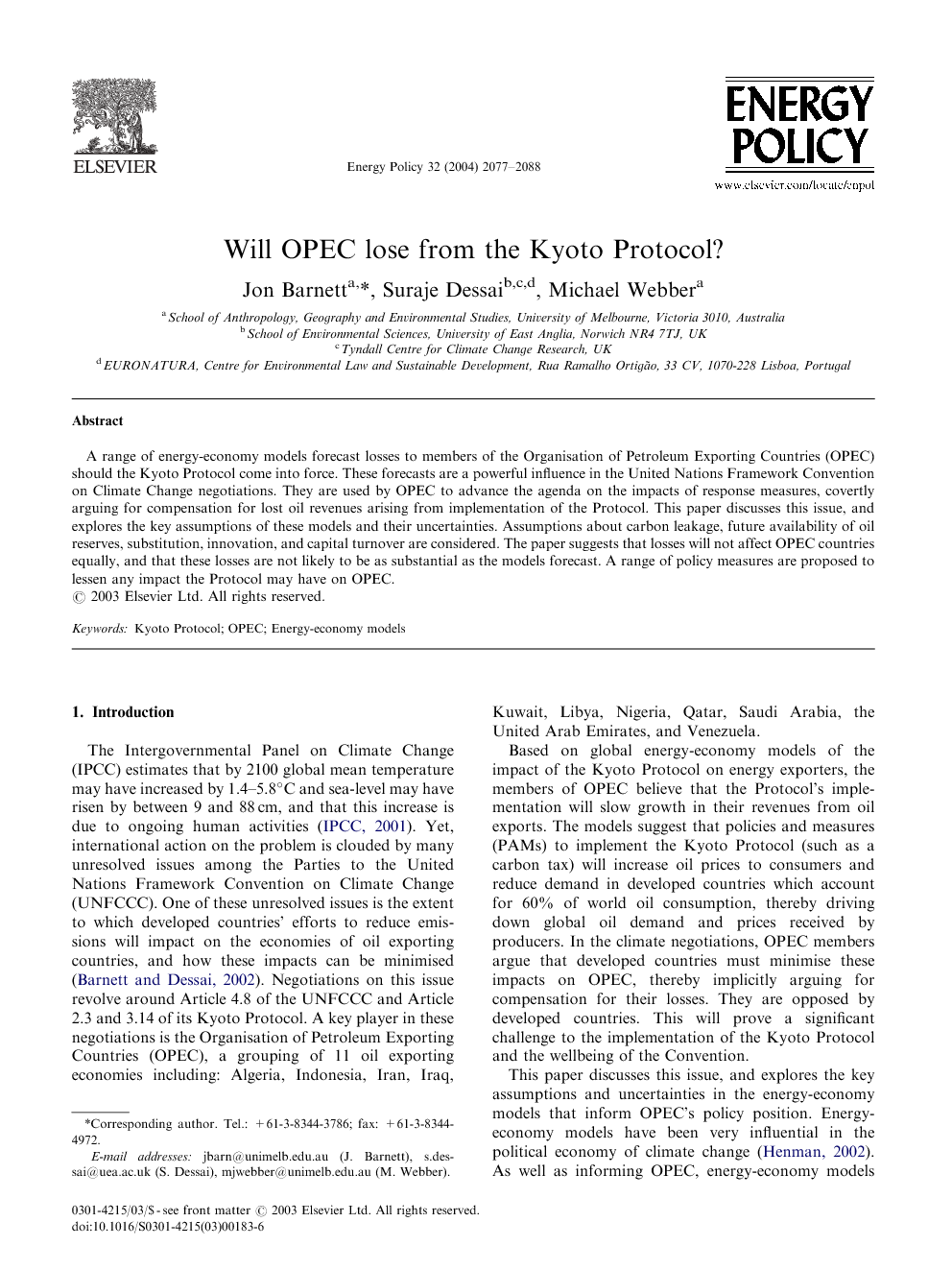 A range of energy-economy models forecast losses to members of the Organisation of Petroleum Exporting Countries (OPEC) should the Kyoto Protocol come into force. These forecasts are a powerful influence in the United Nations Framework Convention on Climate Change negotiations. They are used by OPEC to advance the agenda on the impacts of response measures, covertly arguing for compensation for lost oil revenues arising from implementation of the Protocol. This paper discusses this issue, and explores the key assumptions of these models and their uncertainties. Assumptions about carbon leakage, future availability of oil reserves, substitution, innovation, and capital turnover are considered. The paper suggests that losses will not affect OPEC countries equally, and that these losses are not likely to be as substantial as the models forecast. A range of policy measures are proposed to lessen any impact the Protocol may have on OPEC.

The Intergovernmental Panel on Climate Change (IPCC) estimates that by 2100 global mean temperature may have increased by 1.4–5.8°C and sea-level may have risen by between 9 and 88 cm, and that this increase is due to ongoing human activities (IPCC, 2001). Yet, international action on the problem is clouded by many unresolved issues among the Parties to the United Nations Framework Convention on Climate Change (UNFCCC). One of these unresolved issues is the extent to which developed countries’ efforts to reduce emissions will impact on the economies of oil exporting countries, and how these impacts can be minimised (Barnett and Dessai, 2002). Negotiations on this issue revolve around Article 4.8 of the UNFCCC and Article 2.3 and 3.14 of its Kyoto Protocol. A key player in these negotiations is the Organisation of Petroleum Exporting Countries (OPEC), a grouping of 11 oil exporting economies including: Algeria, Indonesia, Iran, Iraq, Kuwait, Libya, Nigeria, Qatar, Saudi Arabia, the United Arab Emirates, and Venezuela. Based on global energy-economy models of the impact of the Kyoto Protocol on energy exporters, the members of OPEC believe that the Protocol's implementation will slow growth in their revenues from oil exports. The models suggest that policies and measures (PAMs) to implement the Kyoto Protocol (such as a carbon tax) will increase oil prices to consumers and reduce demand in developed countries which account for 60% of world oil consumption, thereby driving down global oil demand and prices received by producers. In the climate negotiations, OPEC members argue that developed countries must minimise these impacts on OPEC, thereby implicitly arguing for compensation for their losses. They are opposed by developed countries. This will prove a significant challenge to the implementation of the Kyoto Protocol and the wellbeing of the Convention. This paper discusses this issue, and explores the key assumptions and uncertainties in the energy-economy models that inform OPEC's policy position. Energy-economy models have been very influential in the political economy of climate change (Henman, 2002). As well as informing OPEC, energy-economy models have been used by the United States and Australia to justify their recalcitrant stance in the climate regime, leading ultimately to their withdrawal of support for the Kyoto Protocol in 2001 (Christoff, 1998; Hamilton, 2001; Harris, 1999; Harrison, 2001). Despite their powerful influence, the assumptions and uncertainties in these models are poorly understood by policymakers, and there are very few widely available reviews of them. This paper reviews those models that address the impact of the Kyoto Protocol on OPEC.