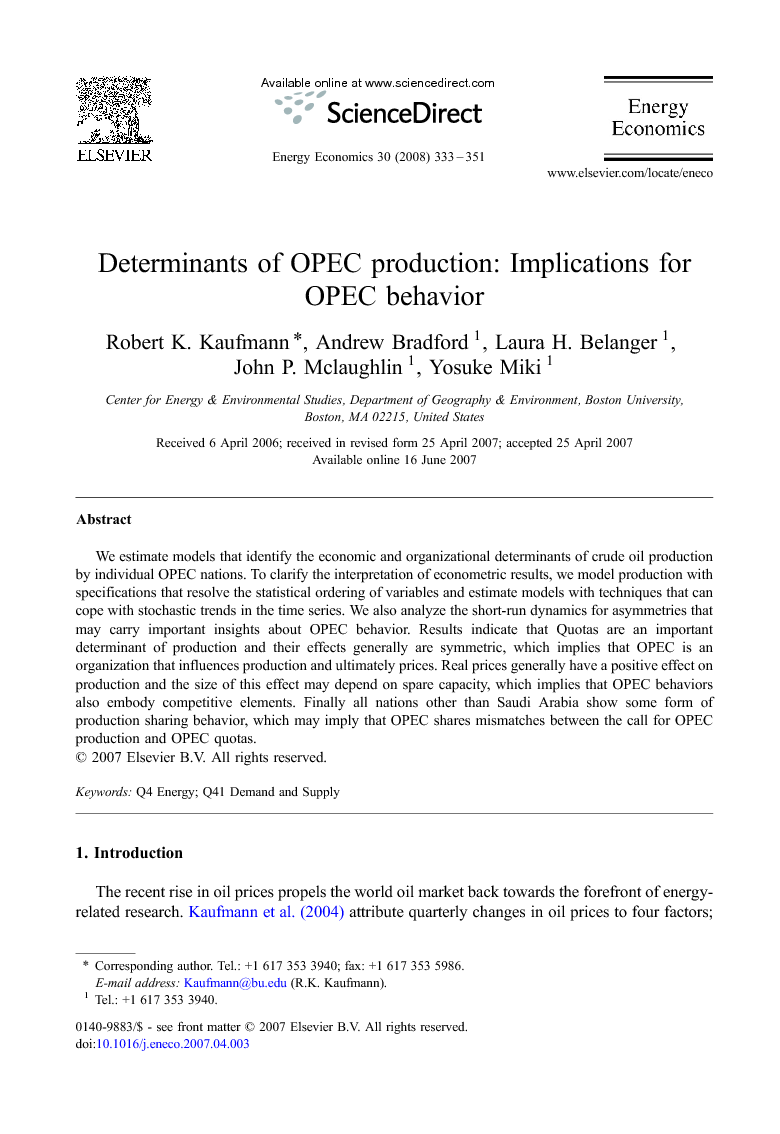 We estimate models that identify the economic and organizational determinants of crude oil production by individual OPEC nations. To clarify the interpretation of econometric results, we model production with specifications that resolve the statistical ordering of variables and estimate models with techniques that can cope with stochastic trends in the time series. We also analyze the short-run dynamics for asymmetries that may carry important insights about OPEC behavior. Results indicate that Quotas are an important determinant of production and their effects generally are symmetric, which implies that OPEC is an organization that influences production and ultimately prices. Real prices generally have a positive effect on production and the size of this effect may depend on spare capacity, which implies that OPEC behaviors also embody competitive elements. Finally all nations other than Saudi Arabia show some form of production sharing behavior, which may imply that OPEC shares mismatches between the call for OPEC production and OPEC quotas.

The recent rise in oil prices propels the world oil market back towards the forefront of energy-related research. Kaufmann et al. (2004) attribute quarterly changes in oil prices to four factors; (1) capacity utilization by OPEC, (2) production quotas established by OPEC, (3) the degree to which OPEC production exceeds these quotas, and (4) private stocks of crude oil that are held in OECD nations. These mechanisms imply that OPEC can influence real oil prices via decisions concerning production, quotas, and operable capacity. To date, research on the factors that motivate these decisions focuses on the nature of OPEC as an organization. Is OPEC a cartel? If not, what are OPEC's goals? By defining OPEC, analysts hope to understand its decision making process and improve their ability to forecast production and prices. Previous efforts describe OPEC using either cartel or non-cartel models (Alhajji and Huettner, 2000b). Non-cartel models focus on competition (e.g. MacAvoy, 1982), changes in ownership (Johany, 1979), and revenue targets (e.g. Teece, 1982). Cartel models seek to classify OPEC as a monopoly, an oligopoly, or a dominant firm. OPEC's classification among these models still is uncertain. Statistical tests of Eq. (3) (in this paper) cause analysts to reject competitive behavior, changes in ownership, and revenue targets (Griffin, 1985, Jones, 1990 and Dahl and Yucel, 1991). Alhajji and Huettner (2000a,b) reject the cartel hypothesis for OPEC as a whole or for the OPEC core (Saudi Arabia, Kuwait, the United Arab Emirates, and Qatar). Instead, Alhajji and Huettner (2000a) argue that Saudi Arabia is a dominant firm and that the remaining members of OPEC can be modeled using alternative representations, such as a target revenue model. Smith (2005) argues that OPEC acts as a bureaucratic syndicate. For an extensive literature review, see Smith (2005). The branch of empirical research emphasized here starts with a seminal paper by Griffin (1985) that evolves through a series of modifications (Loderer, 1985, Green, 1988, Dahl and Yucel, 1991, Polasky, 1992, Jones, 1990, Griffin and Nielson, 1994, Gulen, 1996, Alhajji and Huettner, 2000a, Alhajji and Huettner, 2000b and Smith, 2005). Many of these analyses generate conflicting results, such as the sign on the relationship between oil prices and production or the importance of production sharing behavior. Furthermore, Smith (2005) argues that Griffin's specification and its derivatives are able to reject only the most extreme forms of behavior, such as “constant market sharing” or the strict version of the target revenue hypothesis. For less extreme behaviors, the models have low power to choose among competing hypotheses for the nature of OPEC as an organization. Given these limits, our modifications to Griffin's model do not attempt to classify OPEC as an organization. Rather, we estimate models that seek to understand how economic and institutional variables influence the rate of crude oil production by individual OPEC nations. To ensure that our results identify the determinants of OPEC production and avoid biases that are associated with the simultaneous determination of oil supply, demand, and price, we model production with specifications that resolve the direction of causality and estimate models with techniques that can cope with stochastic trends in the time series. To use these techniques, we ensure cointegration with a simple change to previous efforts—including OPEC Quotas. In addition to improving the statistical properties of the estimations, the results generate some significant insights. OPEC quotas affect production, both in the short- and long-term. This result indicates that OPEC exercises market power by assigning quotas that influence production and prices. Higher oil prices increase production by individual OPEC nations, rather than depressing production as found by previous studies. This implies that OPEC behavior also embodies competitive elements. These results and the methodology used to generate them are described in five sections. Section 2 describes an econometric methodology that allows us to estimate models for crude oil production by eight OPEC nations. Econometric results are described in Section 3. Section 4 describes what the results imply about the effect of quotas, prices, and production sharing behavior on OPEC production and what these effects imply regarding the on-going debate about the nature of OPEC as an organization. Section 5 describes limits on current research and suggests a change that may improve the ability to model oil prices and improve the understanding of OPEC as an organization.

We do not view results that support conflicting interpretations of OPEC behavior as a weakness. We view them as a strength. They highlight the only consistency from more than thirty years of research—OPEC does not fit neatly into any single model. If it did, the intellectual effort that has been brought to bear on this question probably would have converged on an answer more clearly than the current state of understanding. Recognizing that OPEC does not fit neatly into a single behavioral model is not an intellectual retreat. Rather, it is an admission of real world complexities. Given the complexities that are associated with the geological, economic, and institutional determinants of oil production in the so-called competitive market of the United States (Kaufmann and Cleveland, 2001), there is no reason to expect a simple model to describe the production behavior by members of an international organization that consists of sovereign nations, which have vastly different geological endowments, economic structures, and political/social aspirations. This is not to say that thirty years of research effort has been misspent. Much has been learned about how OPEC behaves based on the consistencies and inconsistencies with simple models. Nor should this research effort be abandoned. Regardless of estimates for remaining supplies of conventional crude oil and the presence and timing of a peak, most analysts agree that OPEC's share of the global market for conventional crude oil will increase over the coming years. Given this change, it is crucial to understand OPEC decisions regarding future rates of production. This research makes a modest first step in that direction. We say “first step” because the models estimated here do not allow us to make meaningful forecasts nor understand the behaviors that underlie production. Specifically, too many of the “causal variables” are exogenous to the VECM or are poorly modeled by the cointegrating relationships for production. Future research may be able to make progress by focusing on the determinants of OPEC's quota, its allocation among member states, and ultimately, installed capacity. To date, the literature has made some important first steps in analyzing the determinants of OPEC quotas (e.g. Alsalem et al., 1997 and Gault et al., 1999). But we do not find a single paper in the peer-review literature that analyzes investment decisions regarding installed capacity in OPEC nations. Such efforts are warranted and ultimately, may fit economic models in ways that production data do not.