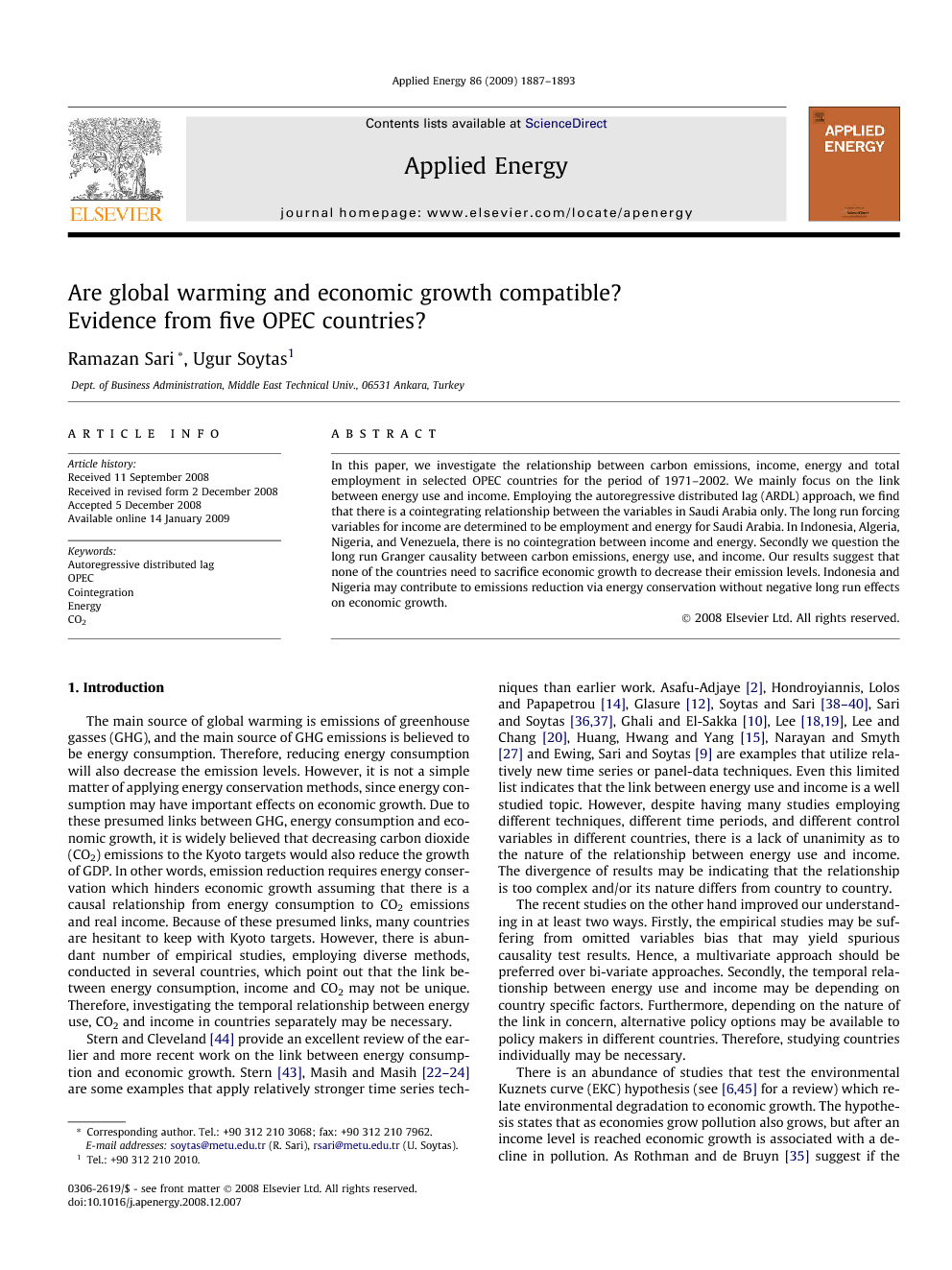 In this paper, we investigate the relationship between carbon emissions, income, energy and total employment in selected OPEC countries for the period of 1971–2002. We mainly focus on the link between energy use and income. Employing the autoregressive distributed lag (ARDL) approach, we find that there is a cointegrating relationship between the variables in Saudi Arabia only. The long run forcing variables for income are determined to be employment and energy for Saudi Arabia. In Indonesia, Algeria, Nigeria, and Venezuela, there is no cointegration between income and energy. Secondly we question the long run Granger causality between carbon emissions, energy use, and income. Our results suggest that none of the countries need to sacrifice economic growth to decrease their emission levels. Indonesia and Nigeria may contribute to emissions reduction via energy conservation without negative long run effects on economic growth.

This paper investigates the relationship between carbon dioxide emissions, energy consumption, income and employment in five OPEC countries. The results indicate that except for Saudi Arabia there is no long run equilibrium relationship between energy consumption, labor, and income. The results of the first part indicate that reducing energy consumption in these countries may not harm economic growth. If energy conservation does not negatively influence economic growth, it emerges as a possible tool for emission reduction. Then the question becomes whether the long run impact on carbon dioxide emissions of a decrease in energy use is significant or not. When we extend the analysis to emission levels, we find that in Nigeria and Indonesia a general and direct policy of energy conservation can reduce emissions without any significant impact on long run growth prospects. Other countries need to consider more specific and indirect policies in order to decrease their emission levels, since the main sources of their long run emissions does not appear to be energy consumption or economic growth. Our results suggest that none of the countries need to sacrifice economic growth in order to reduce carbon dioxide emissions. Although, income Granger causes emissions in Nigeria, this country appears to have a policy option that may help reduce emissions without a negative impact on income in the long run. It should be noted that the findings are limited with the countries investigated. The results should not be generalized since there is a large literature that shows a causal relationship between income and energy consumption for some countries. In such cases the energy conversion may harm economic growth. We suggest further research with capital stock data included as data allows.