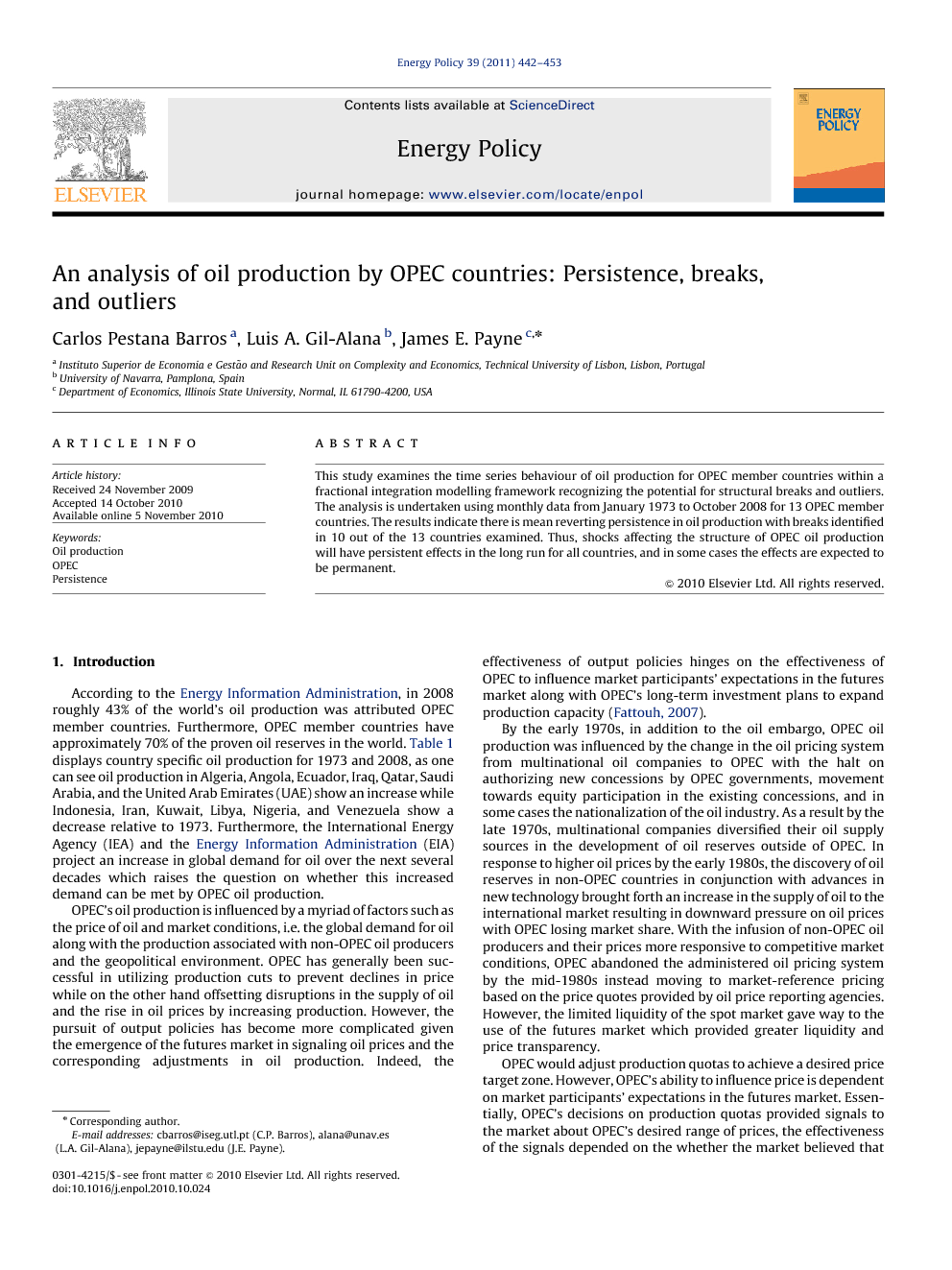 This study examines the time series behaviour of oil production for OPEC member countries within a fractional integration modelling framework recognizing the potential for structural breaks and outliers. The analysis is undertaken using monthly data from January 1973 to October 2008 for 13 OPEC member countries. The results indicate there is mean reverting persistence in oil production with breaks identified in 10 out of the 13 countries examined. Thus, shocks affecting the structure of OPEC oil production will have persistent effects in the long run for all countries, and in some cases the effects are expected to be permanent.

Unlike previous studies on oil production employing traditional unit root integrated models or even threshold unit root tests, this study adopts a fractional integration model adopted by Caporale and Gil-Alana, 2007 and Caporale and Gil-Alana, 2008 which incorporates breaks and outliers in the analysis. Specifically, we present different specifications based on fractional integration, first with no breaks, and then allowing outliers and breaks to describe time series dependence and other implicit dynamics of oil production in OPEC countries. The results indicate that the standard methods employed in the literature, based on stationary I(0) or nonstationary I(1) models are clearly rejected in favour of fractional degrees of integration. Evidence of long memory (d>0) is obtained in all cases, with orders of integration ranging from 0.642 (Iraq during the first subsample, January 1973–October 1980) to 1.141 (Libya, first subsample:January 1973–January 1981). However, the results substantially vary from one country to another. Thus, for Algeria, Indonesia, and Kuwait, we do not observe breaks, and mean reversion is obtained in the three countries with their orders of integration strictly below 1, which indicates that shocks are transitory and mean reverting, disappearing in the long run. Mean reversion is also observed in some countries in which a single break is required; for example, Iran, Qatar, UAE, Ecuador, and Venezuela during the first subsamples, and in the latter two countries outliers seem to be present as well. Finally, we observe two countries with two structural breaks, Iraq and Saudi Arabia. In the former country, mean reversion occurs during the sample period except for the period of the 1980s, and in Saudi Arabia during the period before the second break in September 1990. These results confirm the high degree of persistence in each series. Thus, the results indicate that shocks affecting the structure of OPEC oil production (based on the estimates of d in all tables), will have persistent effects in the long run for all countries, and in some cases the effects are expected to be permanent. Indeed, the maximum rate of oil production is determined by operational capacity which in turn is influenced by the existing capital structure. Hence, it is not surprising to observe a high degree of persistence in terms of oil production. The incorporation of outliers and structural breaks into the analysis highlights the role of exogenous events either political or economic, which may reduce production levels below operational capacity. As a consequence, disruptions in oil production and supply will have a persistent impact on economic activity as such shocks will be transmitted to other sectors of the economy. Therefore, it is crucial for policy makers to distinguish the nature of the shock (i.e. transitory or persistent) since the policy actions may differ as to the type of shock. In case of values of d equal to or above 1, stabilization policies in restoring production levels to equilibrium levels will be required; otherwise, the implications for oil production and supply will persist forever. On the other hand, for countries with values of d below 1, shocks will disappear in the long run as production will return to equilibrium levels over time without the need for stabilization efforts. In summary, it is clear that taking first differences in the oil production of OPEC countries under the assumption of a unit root, may lead in some cases to series that are over-differenced, and subsequently such a procedure may result in inappropriate policy actions. Similarly, the standard analysis based on cointegration techniques and involving oil productioni should be examined in the more general context of fractional cointegration (Robinson and Hualde, 2003 and Johansen, 2008). Second, persistence behaviour is another characteristic of these data although for some countries the adjustment process takes a long time to disappear in which case an active oil policy stance is required to restore oil production levels. Third, outliers do not alter the main conclusions of this study though in two countries (Ecuador and Venezuela) outliers should be considered even in the context of structural breaks. Fourth, the breaks in oil production are specific to each country or common to OPEC policy, signifying that there are specific events that affect each country’s oil production and common elements to many OPEC countries.