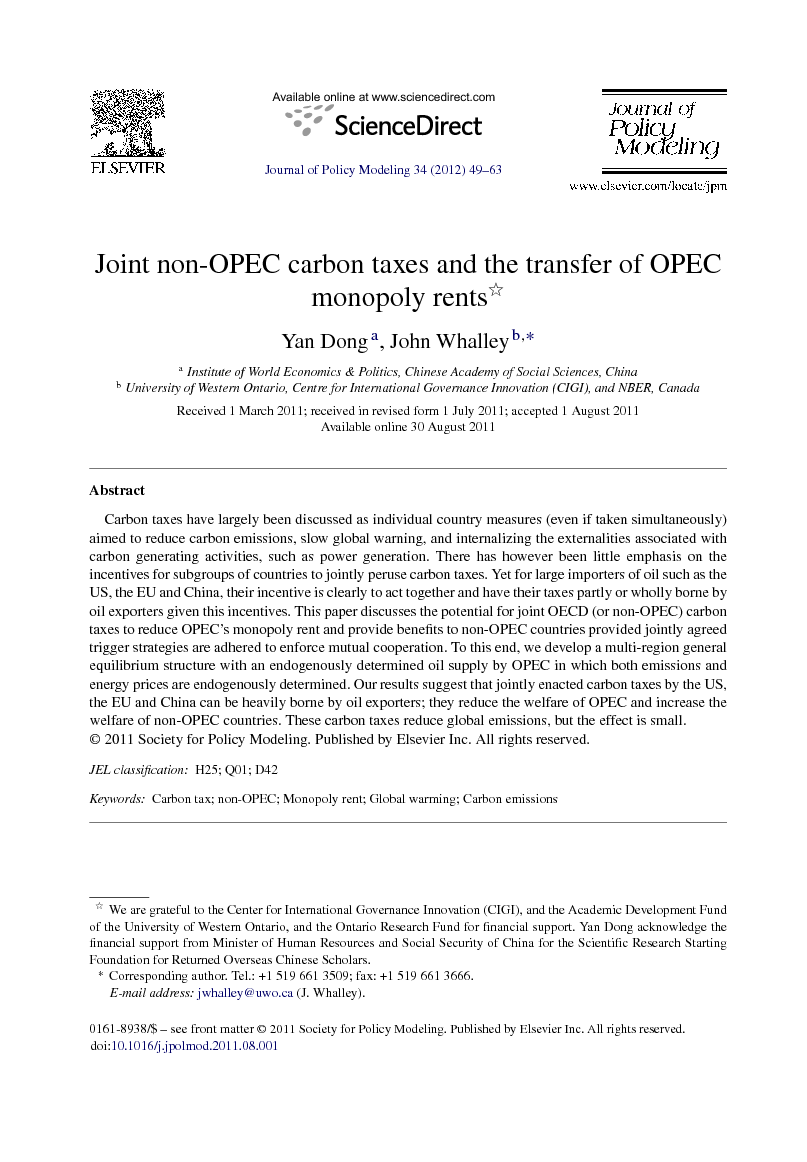 Carbon taxes have largely been discussed as individual country measures (even if taken simultaneously) aimed to reduce carbon emissions, slow global warning, and internalizing the externalities associated with carbon generating activities, such as power generation. There has however been little emphasis on the incentives for subgroups of countries to jointly peruse carbon taxes. Yet for large importers of oil such as the US, the EU and China, their incentive is clearly to act together and have their taxes partly or wholly borne by oil exporters given this incentives. This paper discusses the potential for joint OECD (or non-OPEC) carbon taxes to reduce OPEC's monopoly rent and provide benefits to non-OPEC countries provided jointly agreed trigger strategies are adhered to enforce mutual cooperation. To this end, we develop a multi-region general equilibrium structure with an endogenously determined oil supply by OPEC in which both emissions and energy prices are endogenously determined. Our results suggest that jointly enacted carbon taxes by the US, the EU and China can be heavily borne by oil exporters; they reduce the welfare of OPEC and increase the welfare of non-OPEC countries. These carbon taxes reduce global emissions, but the effect is small.

This paper discusses the potential role of jointly applied non-OPEC carbon taxes supported by appropriate trigger price mechanisms in reducing OPEC's monopoly rent. Essentially, major oil importers such as the EU, the US and China have a strong incentive to act jointly by mutually agreeing to institute carbon taxes to help reduce emissions and slow global warming. Because of reduced demand for fossil fuels in these countries, the price of oil falls and part (or all) of the burden of carbon taxes falls on oil exporters (OPEC) who have not instituted the tax. The joint community of interest, especially between the US and the China, also provides a direction for mutually beneficial cooperation to counteract current conflicts over G20 issues related to rebalancing. A carbon tax is an environmental tax either on the carbon content of goods, or directly on the emissions of carbon dioxide and other greenhouse gases, its main purpose is to slow climate change by reducing emissions. In the processes, it reduces the demand for fossil fuels including oil. It is the division countries into oil exporters and oil importers that we focus on have, since by acting together on such taxes, oil importers can shift the burden of such taxes to oil exporters. While there are major concerns over the potentially severe effects of global warming, only limited taxes of this type have been enacted in some European Union countries, such as Sweden, Finland, the Netherlands, Norway, Italy and The United Kingdom. There are also proposals in U.S., Canada, and some developing countries, including China (see Liang, Fan, & Wei, 2007). But OPEC has monopoly power in the world oil market and through this extracts significant monopoly rent, and a jointly implemented non-OPEC carbon tax can countervail OPEC's monopoly power to the advantage of the non-OPEC, which is what we emphasize here. Existing discussion of carbon taxes builds on earlier literature on pollution as a negative externality and sees the primary purpose of a carbon tax as to internalize negative externalities. This tax was discussed by Pigou (1938) and became labelled Pigouvian Tax. Later, Terkla (1984), Pearce (1991) and others also discussed the “double dividend” from a carbon tax; a carbon tax not only reduces the distortionary loss from the externality, the revenue raised by the tax can also be used to reduce other distortionary taxes, and so lower the deadweight loss of tax systems. We emphasize a third benefit for non-OPEC countries from a joint carbon tax with appropriate supporting trigger strategies, i.e. transferring rents from OPEC to the oil importing countries. Since carbon taxes reduce the consumption of oil in importing countries, they reduce OPEC's production price of oil and rents are transferred to the non-OPEC oil importing countries. Lerner (1980) earlier proposed a plan for using taxes in this way to break OPEC. He advocated that a commodity specific tax on oil be used supported by the trigger strategies that the United States and governments of oil-consuming countries impose a 100% excise tax on the difference between OPEC's price and the pre-OPEC price adjusted for inflation. Lerner's plan was aimed to have the effect of doubling the non-OPEC elasticity of demand for oil causing the non-OPEC to demand less oil at higher prices and to reduce the strength of the oil cartel. His plan was not promoted for environmental purposes and was never adopted after first made, but our analysis is in the spirit of his original proposal. To investigate these possibilities, we develop a multi-region general equilibrium model in which countries produce commodities of varying emissions intensities using substitutable fossil fuel based oil and non-oil inputs (as in Dong and Whalley, 2010 and Dong and Whalley, 2011). The possible influences of environmental agreements on OPEC are captured by a range of existing oil-economy models and they also show that OPEC will lose from emissions mitigation such as under the Kyoto Protocol (see Barnett et al., 2004, Bernstein et al., 1999, Bye, 2010, Ghanem et al., 1999, Jorgenson and Wilcoxen, 1993 and McKibbin et al., 1999). None of these, to our knowledge, have linked these effects directly to the joint adoption of carbon tax in numerical modeling. Unlike in conventional trade models in which there is a fixed endowment of factor inputs (including fossil fuels) for each country, here we model on oil supply function for each country reflecting increasing extraction costs. We treat the extraction cost function as being in constant elasticity form to yield a specification consistent with alternative values of the supply elasticity of oil. To our knowledge, this structure, while simple, is novel in numerical work. In our numerical simulation analysis, we use a number of data sources to construct a benchmark global equilibrium data set based on data for 2006. This covers production, consumption, and trade for five regions (China, EU, US, OPEC, ROW). We calibrate our model to this data set using literature based estimates of key elasticities, with the exception of production function elasticities which we determine using data on oil prices and marginal cost and Lerner's pricing rule (see Lerner (1934)) for monopoly producers. Our results show that a uniform carbon tax used by non-OPEC countries can lower oil prices and increase oil-importing countries, welfare and income, while reducing OPEC's welfare and income. The tax effectively transfers monopoly rents from OPEC to oil-importing countries, and the higher the carbon tax, the more rent will be transferred. Carbon taxes also reduce global emissions. The implication would seem to be that the incentives for large oil importers such as the US, the EU, and China to act together and to jointly enact carbon taxes are large. These incentives do not seem to be reflected in existing literature.