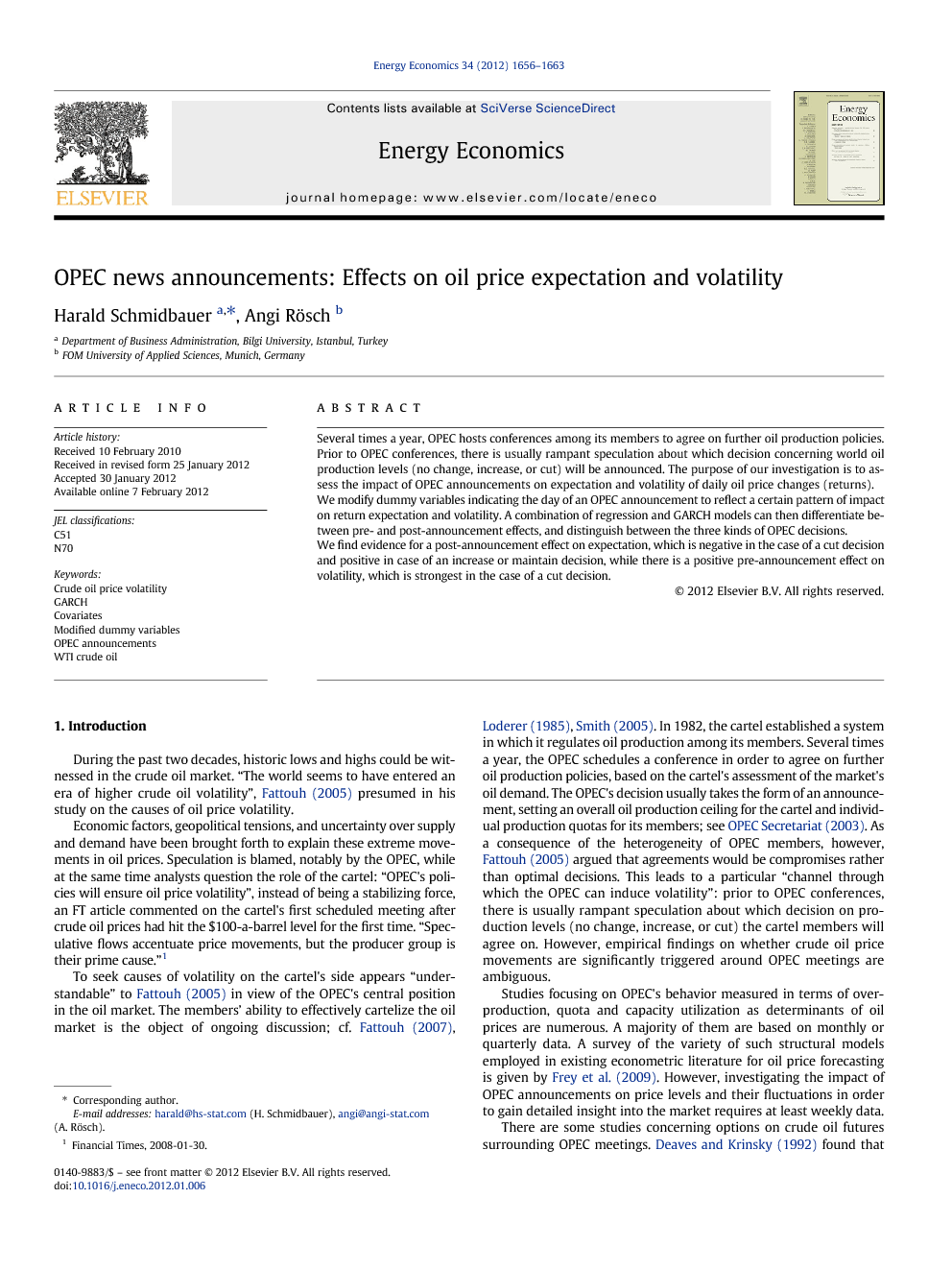 Several times a year, OPEC hosts conferences among its members to agree on further oil production policies. Prior to OPEC conferences, there is usually rampant speculation about which decision concerning world oil production levels (no change, increase, or cut) will be announced. The purpose of our investigation is to assess the impact of OPEC announcements on expectation and volatility of daily oil price changes (returns). We modify dummy variables indicating the day of an OPEC announcement to reflect a certain pattern of impact on return expectation and volatility. A combination of regression and GARCH models can then differentiate between pre- and post-announcement effects, and distinguish between the three kinds of OPEC decisions. We find evidence for a post-announcement effect on expectation, which is negative in the case of a cut decision and positive in case of an increase or maintain decision, while there is a positive pre-announcement effect on volatility, which is strongest in the case of a cut decision.

During the past two decades, historic lows and highs could be witnessed in the crude oil market. “The world seems to have entered an era of higher crude oil volatility”, Fattouh (2005) presumed in his study on the causes of oil price volatility. Economic factors, geopolitical tensions, and uncertainty over supply and demand have been brought forth to explain these extreme movements in oil prices. Speculation is blamed, notably by the OPEC, while at the same time analysts question the role of the cartel: “OPEC's policies will ensure oil price volatility”, instead of being a stabilizing force, an FT article commented on the cartel's first scheduled meeting after crude oil prices had hit the $100-a-barrel level for the first time. “Speculative flows accentuate price movements, but the producer group is their prime cause.”1 To seek causes of volatility on the cartel's side appears “understandable” to Fattouh (2005) in view of the OPEC's central position in the oil market. The members’ ability to effectively cartelize the oil market is the object of ongoing discussion; cf. Fattouh (2007), Loderer (1985), Smith (2005). In 1982, the cartel established a system in which it regulates oil production among its members. Several times a year, the OPEC schedules a conference in order to agree on further oil production policies, based on the cartel's assessment of the market's oil demand. The OPEC's decision usually takes the form of an announcement, setting an overall oil production ceiling for the cartel and individual production quotas for its members; see OPEC Secretariat (2003). As a consequence of the heterogeneity of OPEC members, however, Fattouh (2005) argued that agreements would be compromises rather than optimal decisions. This leads to a particular “channel through which the OPEC can induce volatility”: prior to OPEC conferences, there is usually rampant speculation about which decision on production levels (no change, increase, or cut) the cartel members will agree on. However, empirical findings on whether crude oil price movements are significantly triggered around OPEC meetings are ambiguous. Studies focusing on OPEC's behavior measured in terms of overproduction, quota and capacity utilization as determinants of oil prices are numerous. A majority of them are based on monthly or quarterly data. A survey of the variety of such structural models employed in existing econometric literature for oil price forecasting is given by Frey et al. (2009). However, investigating the impact of OPEC announcements on price levels and their fluctuations in order to gain detailed insight into the market requires at least weekly data. There are some studies concerning options on crude oil futures surrounding OPEC meetings. Deaves and Krinsky (1992) found that during the 1980s, the oil futures market responded efficiently to OPEC announcements of “good news” in terms of bearish outcomes, but on the average, future prices underreacted to bullish outcomes. The pricing of higher return volatility around the meetings may account for this asymmetry, they argued. The study by Horan et al. (2004) of data observed during the 1990s suggested that implied volatility increases when meetings approach, followed by a decline from the first day. Investigating realized volatility of future prices in the end 1990s, Wang et al. (2008) found evidence for the importance of OPEC meetings in the weekly, but none in the daily, horizon. Their findings suggest that OPEC announcements of an increase in production have a positive impact on weekly volatility, but in the pre-meeting period only. There were no significant results with respect to maintain or cut decisions of the cartel. Wirl and Kujundzic (2004) compared percentage changes of average crude oil prices before and after the cartel's announcements, concluding that these seem to play a diminished role in the world oil market after 1985. Covering the period from 1982 through 2008, Lin and Tamvakis (2010) analyzed whether there are differences between no-change, increase, or cut decisions of the cartel with respect to its impact on prices of crude oil diversified into price regimes, light and heavy, OPEC and non-OPEC grades. In their approach they considered returns surrounding announcements and accumulated deviations from average returns relating to preceding announcement-free periods. They observed after-announcement effects, varying in strength and direction, depending on the type of decision and on the price regime. Results related to no-change announcements were mostly found insignificant. These observations were made likewise for OPEC and non-OPEC grades, light and heavy grades. The purpose of our investigation is to assess whether the following hypotheses can be supported by evidence: • OPEC announcements impact crude oil spot prices in terms of return (price change) expectation. • OPEC announcements impact crude oil spot prices in terms of return volatility. • There is asymmetry in the sense that the impact on volatility is more pronounced prior to an announcement, while impact on expectation becomes visible after an announcement is made. • The extent of impact depends on the type of decision to be announced. Specifically, we hypothesize that: - there will be a positive (negative) impact on return expectation in case of a cut (increase, respectively) decision (cf. Lin and Tamvakis, 2010); - the impact on volatility will be stronger in case of a cut or increase decision, than in the case of a maintain decision, the latter not giving a new trade impulse. In our study, we consider daily price changes of West Texas Intermediate (WTI), one of the benchmark crudes, and OPEC meetings since 1986. The idea that announcements may affect expectation of price changes as well as volatility leads us to a GARCH specification with covariates. The covariates are dummy variables which indicate the day of the announcement and allow for modeling different patterns of anticipation or aftereffects of the cartel's decision (no change, increase, or cut of production level). All computations were carried out in R (R Development Core team, 2011). — This paper is organized as follows. Section 2 introduces the data which we use in our study. The GARCH specification, and how we proceed to model possible effects of announcements are provided in 3 and 4. Empirical results are presented in Section 5. Finally, Section 6 gives a summary and some conclusions.

The purpose of our investigation was to ascertain possible effects of OPEC announcements of decisions on the expectation and volatility behavior of WTI spot price changes in a daily time horizon. We apply a regression model with GARCH residuals, where three dummy variables indicating the day of the announcement of no change, increase, or cut of production level appear as exogenous variables in the regression as well as in the GARCH specification. A set of dummy variable modifications allow for modeling different patterns of anticipation or aftereffects of the cartel's decision. This model makes it possible to analyze the character of the impact of OPEC announcements, which are regarded as exogenous. This approach reflects the needs of an investor in the oil market, requiring detailed insight into the market. The empirical basis of the study consists of data from January 1986 through September 2009. Our findings suggest that there is asymmetry in the behavior of daily WTI price changes: We found strong evidence that OPEC decisions are anticipated by market players, namely reflected in the volatility of price changes in the pre-announcement period, while aftereffects appear to play a significant role in the expectation of price changes. Moreover, the pattern of impact from OPEC announcements appears non-uniform with respect to the type of decision. Anticipation effects on volatility appear to be highly pronounced in the case of decisions to cut or maintain the production level, but are absent in the case of decisions to increase production. Aftereffects on expectation, on the other hand, were found significant in all three cases, and were further found to persist the longest in the case of decisions to increase the production level. Wirl and Kujundzic (2004) concluded, with data ending in 2001, that the OPEC's impact on the crude oil world market has weakened after 1985 and at best restricted to meetings recommending price increases. Our results reinforce the conception of the cartel's meetings as a “channel through which the OPEC can induce volatility” (Fattouh, 2005), in particular prior to the announcement. Finally, our results give rise to a hypothesis concerning the explanation of the behavior of volatility in the pre-announcement period, namely that information leakage is crucial in the creation of volatility.