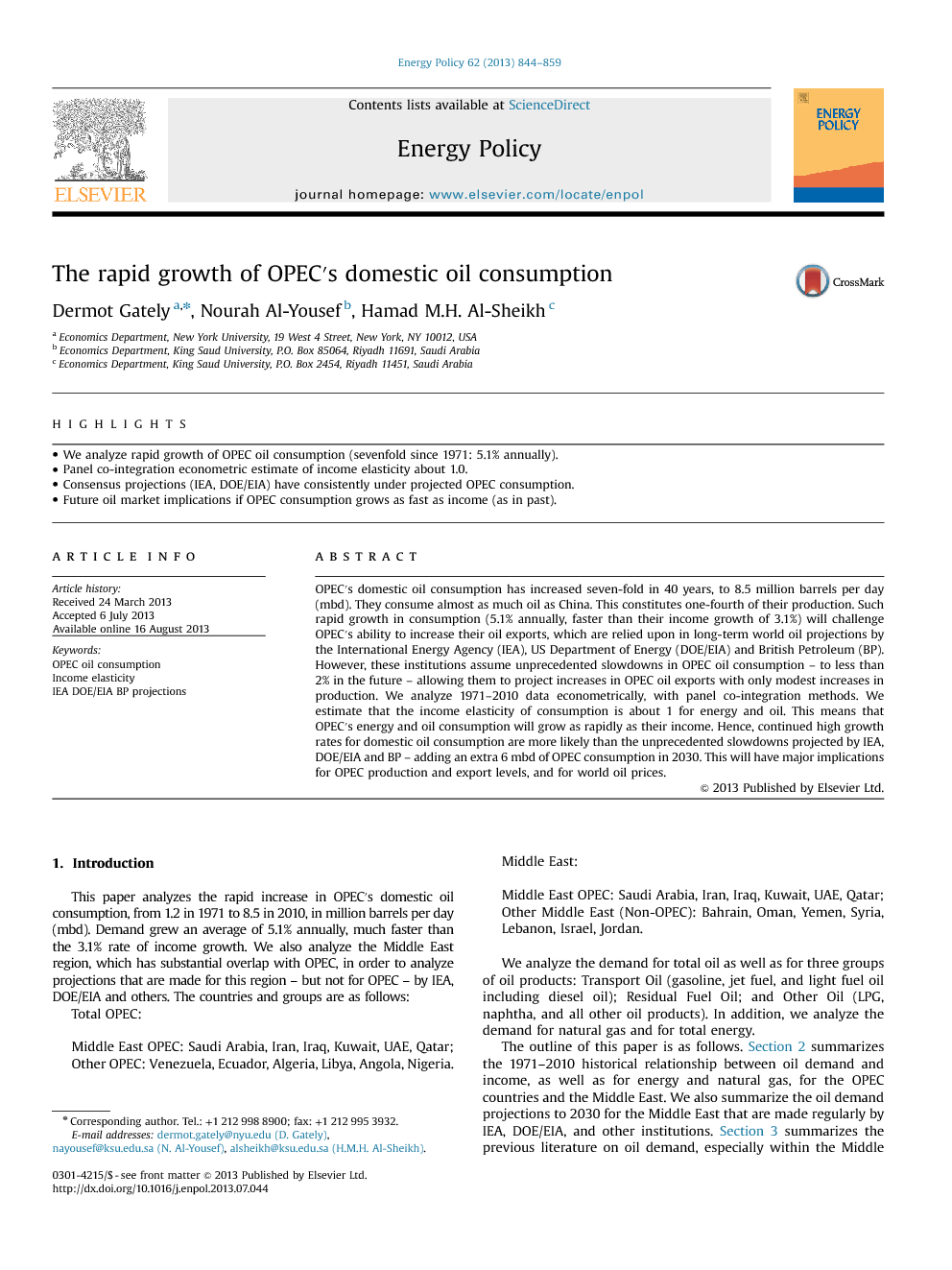 OPEC′s domestic oil consumption has increased seven-fold in 40 years, to 8.5 million barrels per day (mbd). They consume almost as much oil as China. This constitutes one-fourth of their production. Such rapid growth in consumption (5.1% annually, faster than their income growth of 3.1%) will challenge OPEC′s ability to increase their oil exports, which are relied upon in long-term world oil projections by the International Energy Agency (IEA), US Department of Energy (DOE/EIA) and British Petroleum (BP). However, these institutions assume unprecedented slowdowns in OPEC oil consumption – to less than 2% in the future – allowing them to project increases in OPEC oil exports with only modest increases in production. We analyze 1971–2010 data econometrically, with panel co-integration methods. We estimate that the income elasticity of consumption is about 1 for energy and oil. This means that OPEC′s energy and oil consumption will grow as rapidly as their income. Hence, continued high growth rates for domestic oil consumption are more likely than the unprecedented slowdowns projected by IEA, DOE/EIA and BP – adding an extra 6 mbd of OPEC consumption in 2030. This will have major implications for OPEC production and export levels, and for world oil prices.

This paper analyzes the rapid increase in OPEC′s domestic oil consumption, from 1.2 in 1971 to 8.5 in 2010, in million barrels per day (mbd). Demand grew an average of 5.1% annually, much faster than the 3.1% rate of income growth. We also analyze the Middle East region, which has substantial overlap with OPEC, in order to analyze projections that are made for this region – but not for OPEC – by IEA, DOE/EIA and others. The countries and groups are as follows: Total OPEC: Middle East OPEC: Saudi Arabia, Iran, Iraq, Kuwait, UAE, Qatar; Other OPEC: Venezuela, Ecuador, Algeria, Libya, Angola, Nigeria. Middle East: Middle East OPEC: Saudi Arabia, Iran, Iraq, Kuwait, UAE, Qatar; Other Middle East (Non-OPEC): Bahrain, Oman, Yemen, Syria, Lebanon, Israel, Jordan. We analyze the demand for total oil as well as for three groups of oil products: Transport Oil (gasoline, jet fuel, and light fuel oil including diesel oil); Residual Fuel Oil; and Other Oil (LPG, naphtha, and all other oil products). In addition, we analyze the demand for natural gas and for total energy. The outline of this paper is as follows. Section 2 summarizes the 1971–2010 historical relationship between oil demand and income, as well as for energy and natural gas, for the OPEC countries and the Middle East. We also summarize the oil demand projections to 2030 for the Middle East that are made regularly by IEA, DOE/EIA, and other institutions. Section 3 summarizes the previous literature on oil demand, especially within the Middle East. The econometric analysis in Section 4 utilizes panel co-integration methods, for each of the fuels separately. In Section 5 we compare our projections of oil demand with those of IEA and DOE/EIA, and in Section 6 we summarize our conclusions. Data sources are listed in Appendix A.

All the major institutions – IEA, DOE/EIA, BP, and OPEC – project growth rates of oil consumption for the Middle East and OPEC that are less than 2% annually, with income growth about 4%. By contrast, since 1971 the average annual growth rate of OPEC consumption has been 5.1% for oil (5.5% for energy) with income growth of 3.1%; growth rates for the Middle East are similar. These institutions provide no econometric analysis in support of their persistent hopefulness. Unlike these projections that OPEC oil demand will grow only half as fast as income, we believe that it will increase about as fast as their income. The income elasticity of oil demand, econometrically estimated by us and by much of the literature, is near 1. Given standard income growth projections, by 2030 OPEC will consume about 50% more oil (6 mbd) than is projected by IEA, DOE/EIA, BP, and OPEC itself. This will have important implications for increases in OPEC oil production or decreases in OPEC exports. Oil prices are likely to increase faster than projected, in order to slow the growth of Non-OPEC oil consumption and stimulate Non-OPEC production. Of course, it is possible that OPEC′s oil consumption could grow only half as fast as their income, as the IEA and DOE/EIA have been projecting for more than a decade, persistently but wrongly. However, this has not happened in four decades, and there is no reason to expect it will start happening soon. Their projections represent what Samuel Johnson called, in another context, “the triumph of hope over experience.”