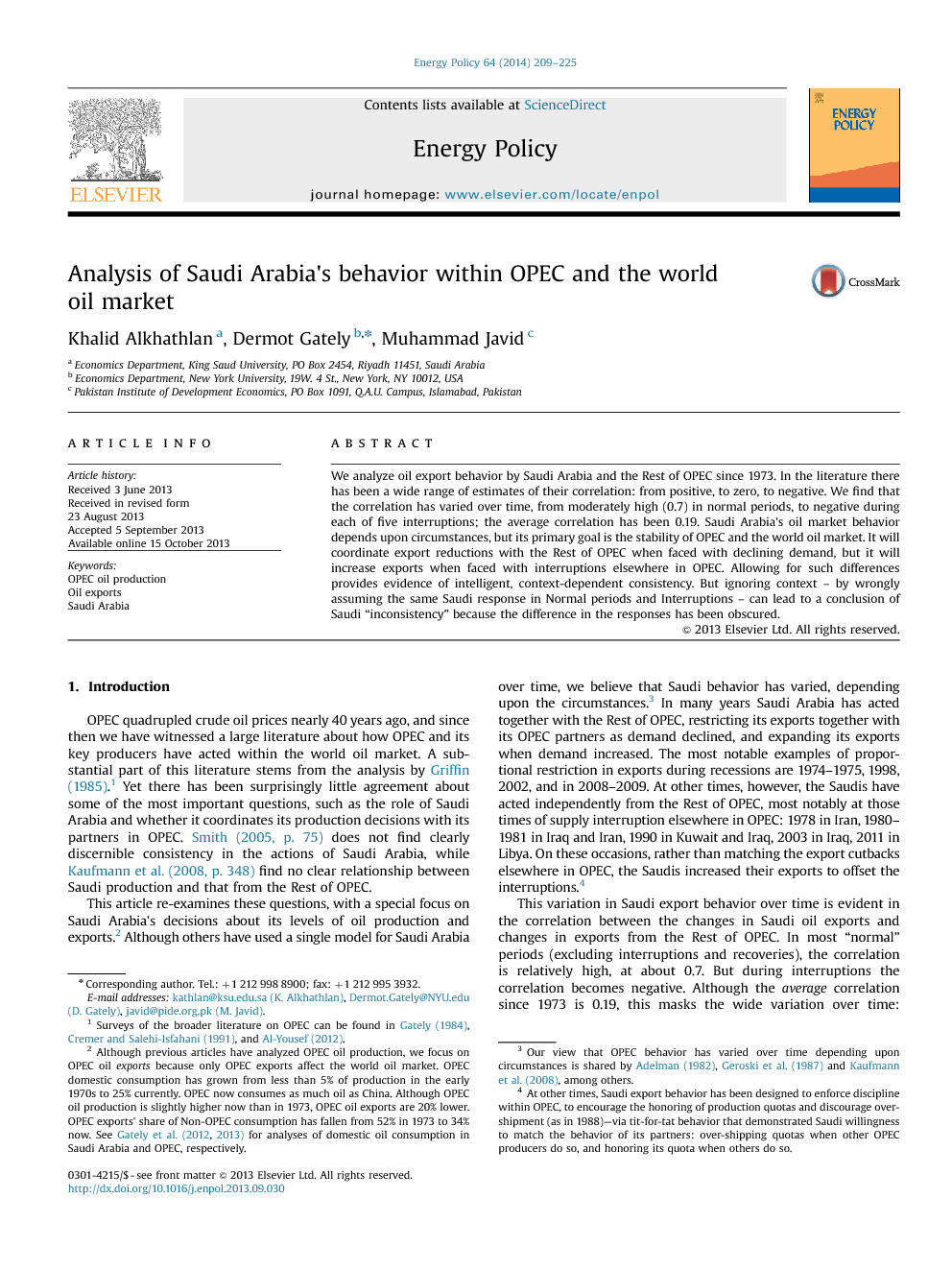 We analyze oil export behavior by Saudi Arabia and the Rest of OPEC since 1973. In the literature there has been a wide range of estimates of their correlation: from positive, to zero, to negative. We find that the correlation has varied over time, from moderately high (0.7) in normal periods, to negative during each of five interruptions; the average correlation has been 0.19. Saudi Arabia's oil market behavior depends upon circumstances, but its primary goal is the stability of OPEC and the world oil market. It will coordinate export reductions with the Rest of OPEC when faced with declining demand, but it will increase exports when faced with interruptions elsewhere in OPEC. Allowing for such differences provides evidence of intelligent, context-dependent consistency. But ignoring context – by wrongly assuming the same Saudi response in Normal periods and Interruptions – can lead to a conclusion of Saudi “inconsistency” because the difference in the responses has been obscured.

OPEC quadrupled crude oil prices nearly 40 years ago, and since then we have witnessed a large literature about how OPEC and its key producers have acted within the world oil market. A substantial part of this literature stems from the analysis by Griffin (1985).1 Yet there has been surprisingly little agreement about some of the most important questions, such as the role of Saudi Arabia and whether it coordinates its production decisions with its partners in OPEC. Smith (2005, p. 75) does not find clearly discernible consistency in the actions of Saudi Arabia, while Kaufmann et al. (2008, p. 348) find no clear relationship between Saudi production and that from the Rest of OPEC. This article re-examines these questions, with a special focus on Saudi Arabia's decisions about its levels of oil production and exports.2 Although others have used a single model for Saudi Arabia over time, we believe that Saudi behavior has varied, depending upon the circumstances.3 In many years Saudi Arabia has acted together with the Rest of OPEC, restricting its exports together with its OPEC partners as demand declined, and expanding its exports when demand increased. The most notable examples of proportional restriction in exports during recessions are 1974–1975, 1998, 2002, and in 2008–2009. At other times, however, the Saudis have acted independently from the Rest of OPEC, most notably at those times of supply interruption elsewhere in OPEC: 1978 in Iran, 1980–1981 in Iraq and Iran, 1990 in Kuwait and Iraq, 2003 in Iraq, 2011 in Libya. On these occasions, rather than matching the export cutbacks elsewhere in OPEC, the Saudis increased their exports to offset the interruptions.4 This variation in Saudi export behavior over time is evident in the correlation between the changes in Saudi oil exports and changes in exports from the Rest of OPEC. In most “normal” periods (excluding interruptions and recoveries), the correlation is relatively high, at about 0.7. But during interruptions the correlation becomes negative. Although the average correlation since 1973 is 0.19, this masks the wide variation over time: strongly positive during “normal” periods but negative during and after supply interruptions. We analyze these different periods separately, distinguishing between normal periods and interruptions, and between increases and decreases in Saudi exports. Within this complexity, we find consistent behavior by Saudi Arabia. The outline of the paper is as follows. In Section 2 we summarize OPEC export behavior since 1973 and the varying relationship between Saudi exports and those from the Rest of OPEC. In Section 3 we review some of the disagreements in the literature, and discuss how our analysis can help to clarify the issues. We focus especially of the asymmetric responsiveness of Saudi exports to increases and decreases in Rest-of-OPEC exports, within normal periods and during interruptions. Section 4 presents the methodology we employ, which is similar to that adopted by most authors following Griffin (1985). Section 5 presents our econometric results. Section 6 summarizes our conclusions. Data sources and details are presented in Appendix A, statistical test results in Appendix B, summary results using OPEC production (rather than exports) in Appendix C, and summary results using the DOLS method in Appendix D.

Our work builds upon Griffin (1985) and subsequent literature to analyze quarterly oil export and production behavior by Saudi Arabia and the Rest of OPEC for the period 1973q1–2012q1. Saudi Arabia's output behavior has varied over time in a systematic way, in response to market conditions and also to interruptions within OPEC. Its behavior differed between “normal” periods and periods with interruptions. In normal periods, when faced with reduced demand, Saudi Arabia cooperated with its OPEC partners to restrict output. During interruptions, however, it would increase its output to offset reductions in the Rest of OPEC, not to match the reductions. By contrast, a single model assuming the same response by the Saudis to output reductions by the Rest of OPEC – regardless of whether those reductions were due to demand cutbacks or to supply interruptions – does not characterize history accurately. What has been consistent since 1973 has been the Saudi response to offsetting interruptions, from the 1978 Iranian Revolution to the 2011 civil war in Libya, and moderately consistent coordinated cutbacks with the Rest of OPEC when demand fell, from the 1974–1975 recession to the 2008–2009 recession. Sometimes, as in the mid-to-late 1980's, the Saudis were especially responsive to over-shipments of quotas by its OPEC partners, and it followed a “tit-for-tat” strategy in order to encourage its partners to honor their quotas: matching over-shipments but reciprocating when quotas were honored. In addition, there were two notable examples when the Saudis acted independently from its partners for an extended period of time: (1) in 1981–1985 it cut its exports, almost unilaterally, in an unwise defense of the 1979–1980 price doubling; and (2) in the 1990’s it kept constant its exports while the Rest of OPEC increased their exports and recovered their market share. The correlation between changes in exports by Saudi Arabia and by the Rest of OPEC reflects this variation in behavior. The average correlation over 1973–2012 was relatively small, at 0.19. However, this average value over 40 years masks wide variation over time. During “normal” (non-interruption) periods the correlation was about 0.7, but during and after each of five interruptions the correlation became negative. The correlation was also low during the 1985–1986 shift to netback pricing, as well as in the mid-1990s, when the Saudis maintained their post-1990 export surge (after the Iraqi invasion of Kuwait) while the Rest of OPEC gradually recovered. Our preferred specification allows for the possibility of asymmetric Saudi export response, between both Normal periods and Interruptions, and between increases and decreases in Rest-of-OPEC exports. The resulting econometric results are superior to more restrictive assumptions about symmetry. We can reject the hypothesis that Saudi exports respond the same way whether in Normal periods or during Interruptions, or whether to Rest-of-OPEC export increases or decreases. The Saudis coordinate export cutbacks with the Rest of OPEC during Normal periods but they offset declines during Interruptions. In addition, during Normal periods there is much greater Saudi export response to Rest-of-OPEC export declines than to export increases. Within this complexity, we find consistency of action by Saudi Arabia, toward its primary goal: to maintain stability in OPEC's oil supplies regardless of geopolitical (and, to a lesser extent, oil market) conditions. Saudi behavior has been remarkably consistent over time. But this is evident in the data only when taking account of the differences between Normal periods and during Interruptions. Otherwise, this consistency will be obscured.