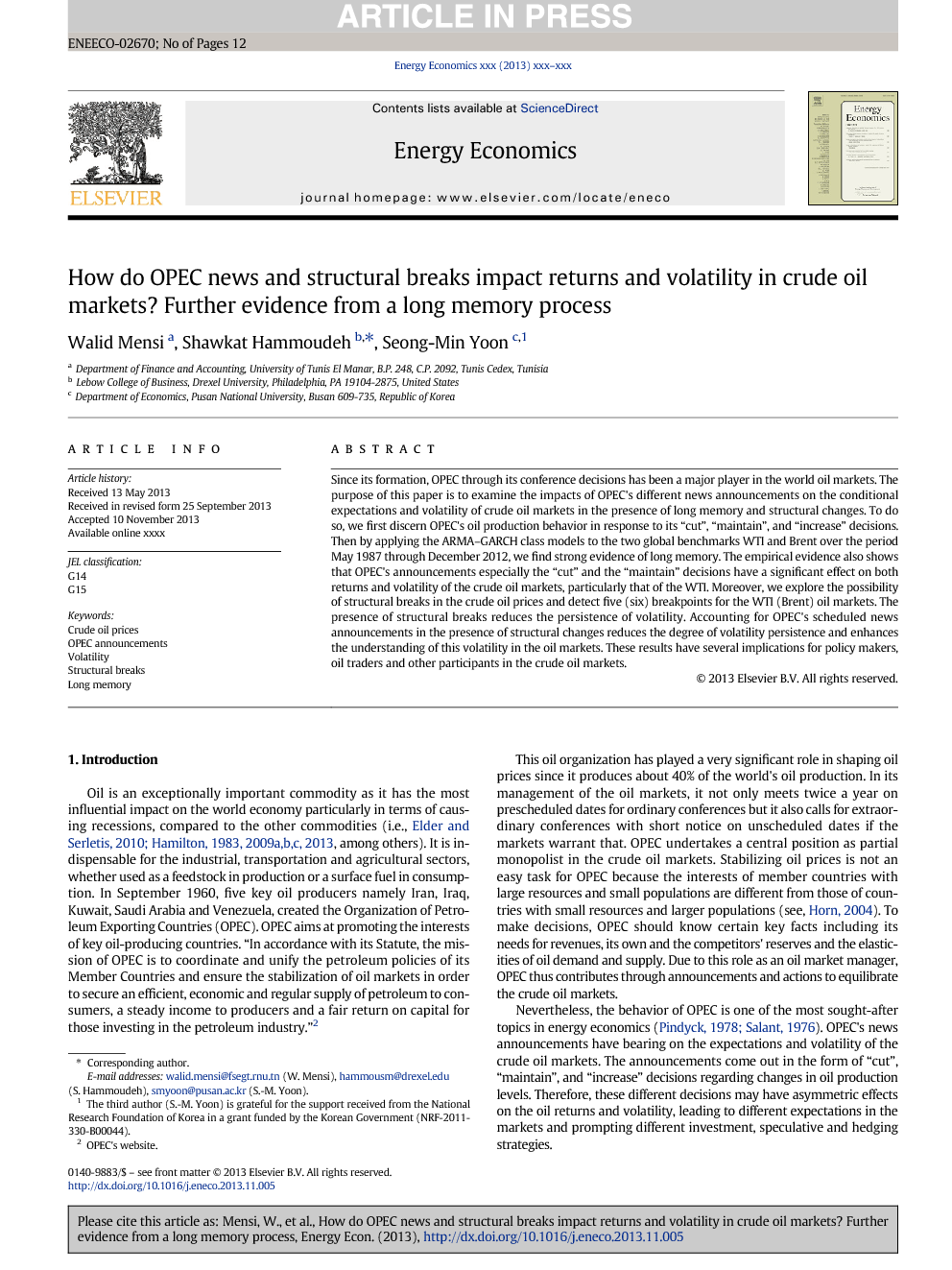 Since its formation, OPEC through its conference decisions has been a major player in the world oil markets. The purpose of this paper is to examine the impacts of OPEC's different news announcements on the conditional expectations and volatility of crude oil markets in the presence of long memory and structural changes. To do so, we first discern OPEC's oil production behavior in response to its “cut”, “maintain”, and “increase” decisions. Then by applying the ARMA–GARCH class models to the two global benchmarks WTI and Brent over the period May 1987 through December 2012, we find strong evidence of long memory. The empirical evidence also shows that OPEC's announcements especially the “cut” and the “maintain” decisions have a significant effect on both returns and volatility of the crude oil markets, particularly that of the WTI. Moreover, we explore the possibility of structural breaks in the crude oil prices and detect five (six) breakpoints for the WTI (Brent) oil markets. The presence of structural breaks reduces the persistence of volatility. Accounting for OPEC's scheduled news announcements in the presence of structural changes reduces the degree of volatility persistence and enhances the understanding of this volatility in the oil markets. These results have several implications for policy makers, oil traders and other participants in the crude oil markets.

Oil is an exceptionally important commodity as it has the most influential impact on the world economy particularly in terms of causing recessions, compared to the other commodities (i.e., Elder and Serletis, 2010, Hamilton, 1983, Hamilton, 2009a, Hamilton, 2009b, Hamilton, 2009c and Hamilton, 2013, among others). It is indispensable for the industrial, transportation and agricultural sectors, whether used as a feedstock in production or a surface fuel in consumption. In September 1960, five key oil producers namely Iran, Iraq, Kuwait, Saudi Arabia and Venezuela, created the Organization of Petroleum Exporting Countries (OPEC). OPEC aims at promoting the interests of key oil-producing countries. “In accordance with its Statute, the mission of OPEC is to coordinate and unify the petroleum policies of its Member Countries and ensure the stabilization of oil markets in order to secure an efficient, economic and regular supply of petroleum to consumers, a steady income to producers and a fair return on capital for those investing in the petroleum industry.”2 This oil organization has played a very significant role in shaping oil prices since it produces about 40% of the world's oil production. In its management of the oil markets, it not only meets twice a year on prescheduled dates for ordinary conferences but it also calls for extraordinary conferences with short notice on unscheduled dates if the markets warrant that. OPEC undertakes a central position as partial monopolist in the crude oil markets. Stabilizing oil prices is not an easy task for OPEC because the interests of member countries with large resources and small populations are different from those of countries with small resources and larger populations (see, Horn, 2004). To make decisions, OPEC should know certain key facts including its needs for revenues, its own and the competitors' reserves and the elasticities of oil demand and supply. Due to this role as an oil market manager, OPEC thus contributes through announcements and actions to equilibrate the crude oil markets. Nevertheless, the behavior of OPEC is one of the most sought-after topics in energy economics (Pindyck, 1978 and Salant, 1976). OPEC's news announcements have bearing on the expectations and volatility of the crude oil markets. The announcements come out in the form of “cut”, “maintain”, and “increase” decisions regarding changes in oil production levels. Therefore, these different decisions may have asymmetric effects on the oil returns and volatility, leading to different expectations in the markets and prompting different investment, speculative and hedging strategies. While OPEC decisions are important for understanding and analyzing the stability (or lack thereof) of oil markets and also crucial for volatility modeling, it is worth noting that these markets are characterized by long-range dependence and structural breaks which also should be accounted for in volatility modeling. More precisely, ignoring structural changes when investigating long memory process may beget to overestimation of volatility persistence, among other statistical properties (see Aggarwal et al., 1999, Arouri et al., 2012a, Arouri et al., 2012b, Ewing and Malik, 2013, Kang et al., 2009, Kang et al., 2011, Lamoureux and Lastrapes, 1990 and Lastrapes, 1989). Arouri et al. (2012a) argue that while persistence in volatility models deals with exponential decays in the autocorrelation of conditional variance, the long memory in volatility processes requires models that accommodate volatility persistence over long horizons. In addition, a presence of unaccounted for structural breaks may reduce the persistence of volatility and hinder the prediction process. Several criticisms are addressed against the long memory models because the presence of this property in the data may be due to the presence of structural breaks or regime switches (Kang et al., 2011). Choi and Zivot (2007), Diebold and Inoue (2001) and Granger and Hyung (2004) argue that structural breaks can severely affect the results of the long memory tests and may generate a spurious long memory process in the series. Hence, the structural change model is more suitable for analyzing volatility than the simple long memory model because structural breaks imply a significant time-variation in unconditional volatility, whereas the LM model requires constant unconditional volatility. This study has three primary objectives. The first objective is to investigate the presence of dual long memory in crude oil market series. The second is to analyze the informational content of OPEC's announcements in terms of their impacts on the behavior of the WTI and Brent prices. More precisely, this objective aims to explore the asymmetric effects of OPEC decisions on the long memory of the oil markets. To achieve this goal, we intend to distinguish between the different kinds of production decisions taken by OPEC whether expressed as “cut” decisions, “maintain” decisions, or “hike” decisions and to examine their effects on the changing persistence of the crude oil markets. The third objective is to investigate the relevance of incorporating structural changes in volatility modeling to obtain accurate levels of volatility persistence. For this purpose, we use the Bai and Perron (2003) test to detect the possibility of structural breaks in the crude oil markets. To the best of our knowledge, this is the first study which investigates the linkages among OPEC decisions, structural breaks and long memory in modeling the conditional expectations and volatilities of the two global crude oil benchmarks (U.S. West Texas Intermediate and Europe's Brent). The remainder of this paper is organized as follows. Section 2 reviews the recent empirical studies in the literature. Section 3 discusses the econometric method used in the paper. Section 4 presents the data and the statistical properties for both the WTI and Brent return series. The empirical results and implications are discussed in Section 5. Finally, we provide concluding remarks in Section 6.

The purpose of this study is to investigate the impact of OPEC's information content on the expectations and volatility for both the WTI and Brent markets, using ARMA–GARCH class models, during a period spanning May 1987 to December 2012. The analysis of OPEC's news announcements provides useful information for each one concerned with the crude-oil markets including investors, oil traders and government agencies. Investigating OPEC's announcements, structural breaks and the LM process is of great relevance to modeling and forecasting the volatility of oil prices. More importantly, the oil portfolio strategies of market participants are sensitive to the OPEC decisions and the LM process in crude oil markets, and this is of interest to policymakers in order to determine the full impact of their financial and economic decisions. This topic is also useful for building accurate asset pricing models, and conducting risk management analysis. Government agencies should pay a great deal of attention to how crude oil markets behave and interact with each kind of OPEC's decisions. As a result, they may pursue appropriate monetary policies in order to combat a recession and stabilize the economy. Government agencies are also interested in OPEC's decisions in order to release from or add to their strategic petroleum reserves. Furthermore, governments in oil-producing countries take into account OPEC's decisions in developing their annual budgets. During the last decade, the crude oil price varied dramatically over time due to economic and geopolitical factors, and the disequilibrium between supply and demand. Moreover, OPEC's conferences increase implicitly the instability of the crude oil markets. For this purposes, we consider three exogenous OPEC decision variables which indicate the date of the organization's news announcements of cutting, maintaining, or increasing its oil production levels. We add these variables to both the conditional expectations and volatility of the ARFIMA–FIGARCH specifications. We conclude that there is strong evidence that OPEC's “cut” and “maintain” announcements are anticipated in the volatility of the WTI and Brent price changes. Moreover, we detect five (six) structural breaks for the WTI (Brent) returns volatility. We conclude that the degree of volatility persistence diminishes significantly after controlling for structural breaks. These findings have several implications for commodity portfolio hedgers, speculators and risk managers. These decision-makers may be able to time the markets' reactions to the different OPEC decisions. For example, since volatility increases in the post-announcement period of the cut decisions, investors who benefit from the heightened return volatility such as the options traders may make decisions accordingly right before the meetings when they view the oil market is in glut. Therefore, the results show that OPEC announcements may create exploitable opportunities and may also lead to excessive speculation behavior. In this case, oil prices may not be viewed as accurate signals of scarcity in the oil markets and pricing of oil-related products and derivative instruments. It will also be interesting in the future to consider the effects of the U.S. Strategic Petroleum Reserve (SPR) announcements on the behavior of energy markets.