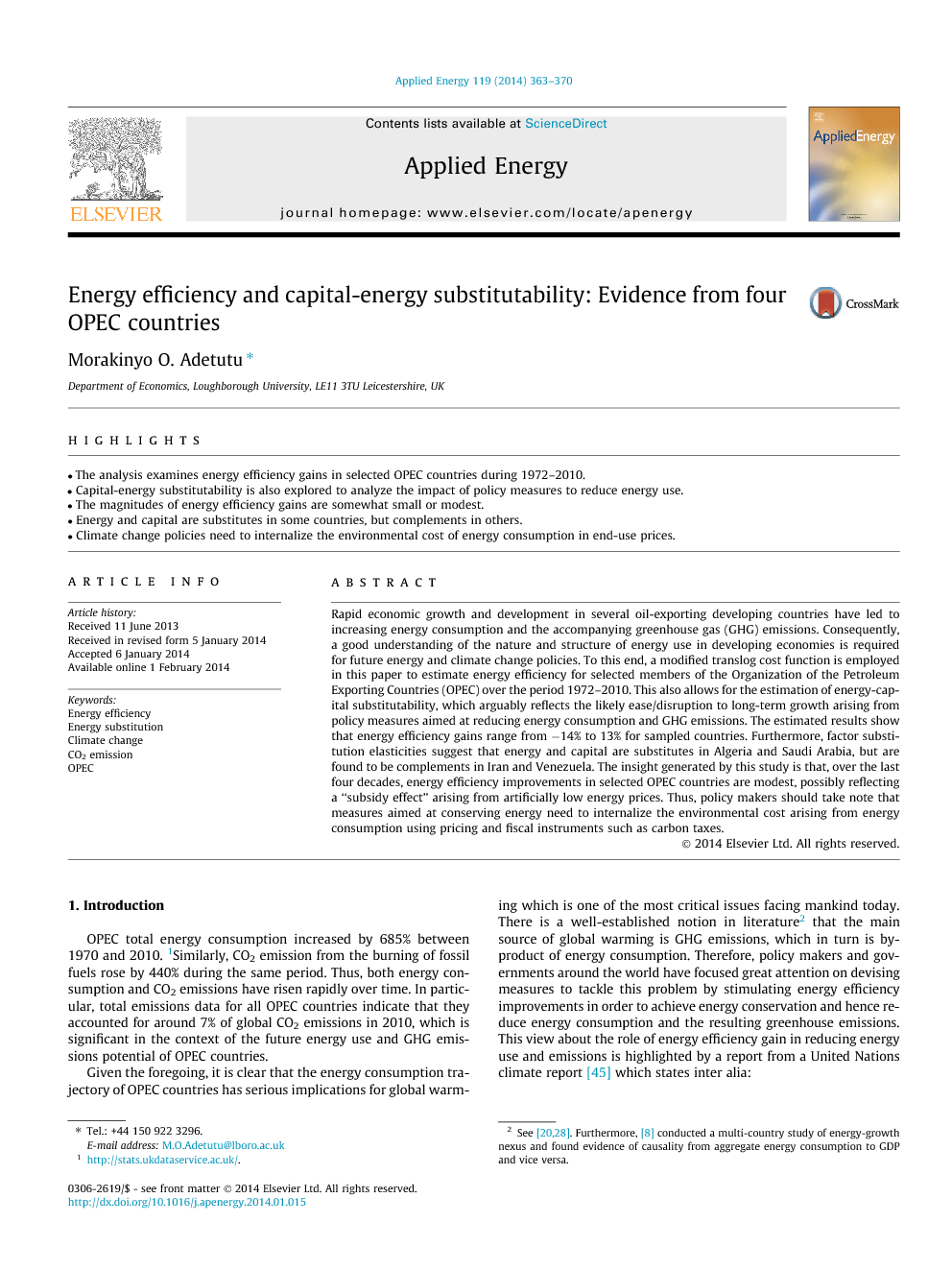 Rapid economic growth and development in several oil-exporting developing countries have led to increasing energy consumption and the accompanying greenhouse gas (GHG) emissions. Consequently, a good understanding of the nature and structure of energy use in developing economies is required for future energy and climate change policies. To this end, a modified translog cost function is employed in this paper to estimate energy efficiency for selected members of the Organization of the Petroleum Exporting Countries (OPEC) over the period 1972–2010. This also allows for the estimation of energy-capital substitutability, which arguably reflects the likely ease/disruption to long-term growth arising from policy measures aimed at reducing energy consumption and GHG emissions. The estimated results show that energy efficiency gains range from −14% to 13% for sampled countries. Furthermore, factor substitution elasticities suggest that energy and capital are substitutes in Algeria and Saudi Arabia, but are found to be complements in Iran and Venezuela. The insight generated by this study is that, over the last four decades, energy efficiency improvements in selected OPEC countries are modest, possibly reflecting a “subsidy effect” arising from artificially low energy prices. Thus, policy makers should take note that measures aimed at conserving energy need to internalize the environmental cost arising from energy consumption using pricing and fiscal instruments such as carbon taxes.

This paper has attempted to estimate energy efficiency gains in selected OPEC countries using a modified translog cost function. First, we show that the modified translog cost specification employed in this study is a robust approach to estimating energy efficiency gains in the energy input. Secondly, and more importantly, we show that on the average, efficiency gains across sample countries are either negative or at best modest over the estimation period. The negative energy efficiency gain observed for Iran and Venezuela possibly reflect a subsidy effect, with energy subsidization rate of 70% and 80.5% respectively, compare to 50.7% in Algeria. 21Given that end-use energy prices are significantly subsidized in OPEC countries, the relatively lower prices act as a disincentive to install efficient technologies and consequently may reduce the propensity to lower GHG emissions. Arguably, a significant proportion of energy efficiency derives from higher energy prices. For instance, Hunt et al. [25] show that in the long-run, energy consumption responds to rising energy prices via the installation of more energy efficient technologies. Other studies ([16], [19] and [30]) have also shown that energy efficiency has a price effect component. The findings presented here have implications for the wider climate change agenda, especially pertaining to countries relying heavily on natural resource export. By extracting as much insight as possible from available data, it is shown here that, unless some form of price and fiscal interventions22 are adopted in OPEC countries, 23future energy consumption and GHG emissions from these countries will pose significant challenges to climate change management in the future. In effect, based on these results, any meaningful attempt at conserving energy in these countries should internalize the negative externality arising from GHG emissions i.e. end use energy prices ought to reflect the opportunity cost arising from resource extraction and the marginal damage cost of energy use. Furthermore, it is shown that conservation policy measures are likely to have greater disruptive impacts on Iran and Venezuela. To derive greater insight, future research should attempt to disaggregate energy efficiency measures for end-use services (such as transport, cooling, and heating) and sectoral energy uses (residential, industrial and electricity). It is very likely that such bottom-up studies will shed more light on the country-specific heterogeneous drivers of (in) efficiency across countries. In addition, future studies of energy efficiency in OPEC countries should attempt to quantitatively assess the precise impact of end-use energy subsidies (which directly affect energy prices) on energy efficiency improvements, considering the role of end-use energy prices as a major source of endogenous technical progress. By extension, since higher energy prices via subsidy removal may be interpreted as partly internalizing the environmental cost of pollution arising from energy use, such a study would be useful in unraveling the extent to which a change in government fiscal strategy may help to cut carbon emissions in OPEC countries. Finally, this study contributes to the direction of future research on energy and climate policies pertaining to OPEC countries (and other non-OPEC oil exporting countries). First, results obtained in this study indicate that climate change policies aimed at curbing energy consumption via fiscal instruments (such as energy taxes and prices) or mandated efficiency standards may have varying disruptive effects on economic growth, as shown by the different substitution elasticities obtained here. Consequently, energy use and energy efficiency studies should endeavor to estimate the substitution elasticities between energy and other factor inputs in order to precisely account for the ease/difficulty of macroeconomic shocks arising from energy policy instruments or measures aimed at conserving energy. For instance, it should now be clear to energy policy makers that a ‘one size fits all’ approach to energy policy design may yield different outcomes in different OPEC countries as shown by the different energy-capital substitutability across sample countries.