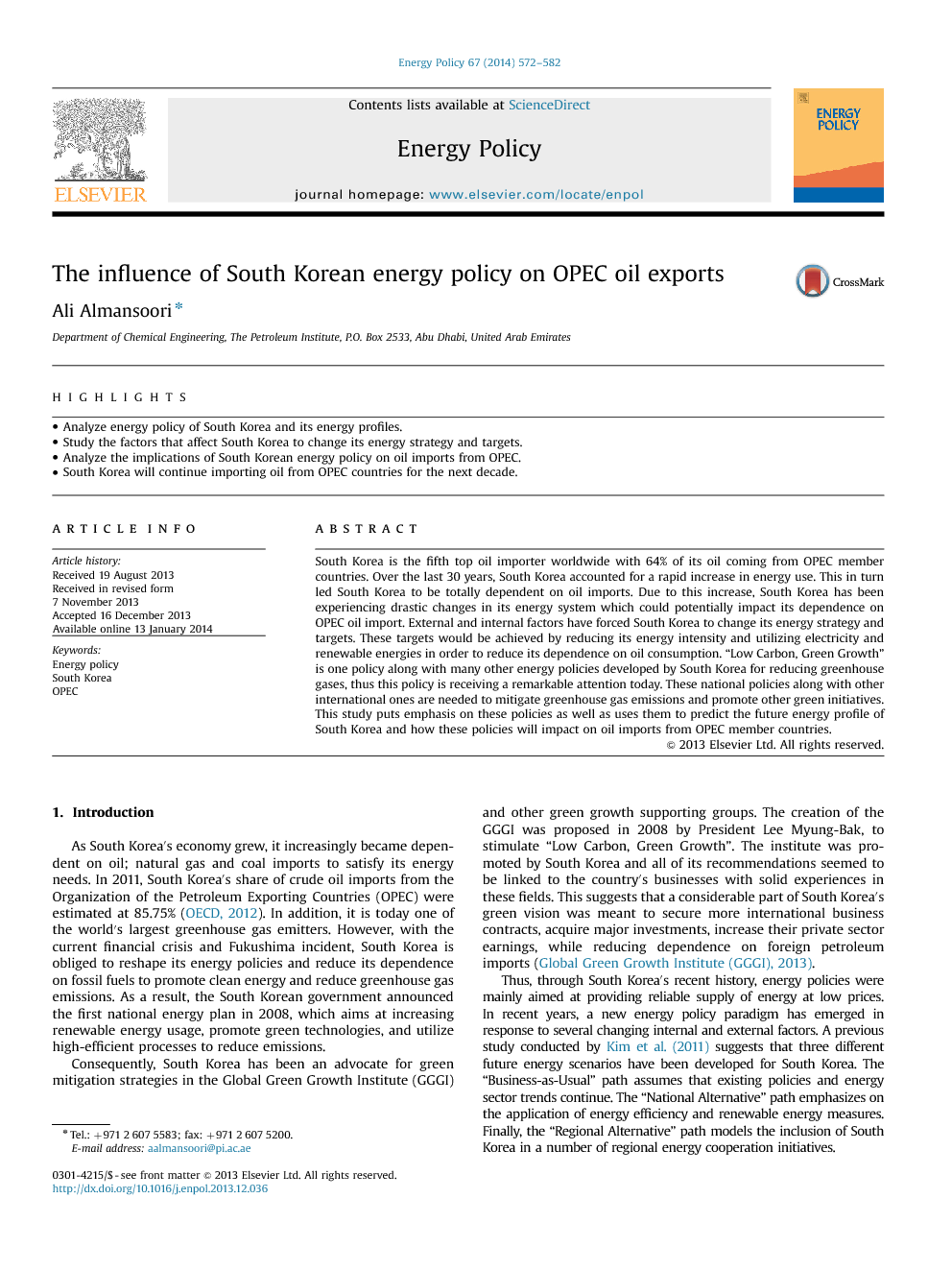 South Korea is the fifth top oil importer worldwide with 64% of its oil coming from OPEC member countries. Over the last 30 years, South Korea accounted for a rapid increase in energy use. This in turn led South Korea to be totally dependent on oil imports. Due to this increase, South Korea has been experiencing drastic changes in its energy system which could potentially impact its dependence on OPEC oil import. External and internal factors have forced South Korea to change its energy strategy and targets. These targets would be achieved by reducing its energy intensity and utilizing electricity and renewable energies in order to reduce its dependence on oil consumption. “Low Carbon, Green Growth” is one policy along with many other energy policies developed by South Korea for reducing greenhouse gases, thus this policy is receiving a remarkable attention today. These national policies along with other international ones are needed to mitigate greenhouse gas emissions and promote other green initiatives. This study puts emphasis on these policies as well as uses them to predict the future energy profile of South Korea and how these policies will impact on oil imports from OPEC member countries.

As South Korea's economy grew, it increasingly became dependent on oil; natural gas and coal imports to satisfy its energy needs. In 2011, South Korea's share of crude oil imports from the Organization of the Petroleum Exporting Countries (OPEC) were estimated at 85.75% (OECD, 2012). In addition, it is today one of the world's largest greenhouse gas emitters. However, with the current financial crisis and Fukushima incident, South Korea is obliged to reshape its energy policies and reduce its dependence on fossil fuels to promote clean energy and reduce greenhouse gas emissions. As a result, the South Korean government announced the first national energy plan in 2008, which aims at increasing renewable energy usage, promote green technologies, and utilize high-efficient processes to reduce emissions. Consequently, South Korea has been an advocate for green mitigation strategies in the Global Green Growth Institute (GGGI) and other green growth supporting groups. The creation of the GGGI was proposed in 2008 by President Lee Myung-Bak, to stimulate “Low Carbon, Green Growth”. The institute was promoted by South Korea and all of its recommendations seemed to be linked to the country's businesses with solid experiences in these fields. This suggests that a considerable part of South Korea's green vision was meant to secure more international business contracts, acquire major investments, increase their private sector earnings, while reducing dependence on foreign petroleum imports (Global Green Growth Institute (GGGI), 2013). Thus, through South Korea's recent history, energy policies were mainly aimed at providing reliable supply of energy at low prices. In recent years, a new energy policy paradigm has emerged in response to several changing internal and external factors. A previous study conducted by Kim et al. (2011) suggests that three different future energy scenarios have been developed for South Korea. The “Business-as-Usual” path assumes that existing policies and energy sector trends continue. The “National Alternative” path emphasizes on the application of energy efficiency and renewable energy measures. Finally, the “Regional Alternative” path models the inclusion of South Korea in a number of regional energy cooperation initiatives. The dependence of South Korea on energy imports has risen from over 60% in 1980 to 97.6% in 2000 (Kim et al., 2011). This led to a large increase in both energy consumption and CO2 emissions while population growth is approaching zero percent. As shown in Table 1 (Kim et al., 2011) the energy indicators have increased substantially in almost every category. A significant body of previous work has been carried out on the influence of energy policy in South Korea and its energy consumption and emissions profiles. However, the main feature of this study is that it addresses the effects of these energy policies on the oil imports from OPEC member countries. To the best of the author's knowledge this issue has not been discussed in the literature to date. Therefore, this research attempts to study the effect of oil imports from OPEC countries on South Korea's energy profile. All predictions and speculations are based on legitimate factors that are presently driving South Korea's economy, as well as on the historical and future energy demand portfolios of South Korea. Table 1. Energy indicators of South Korea (Kim et al., 2011). Category 1981 1990 1995 2003 2007 2009 Average annual growth rate (%) 1981–1990 1990–2007 Primary energy consumption (million toe) 46 93 150 215 237 242 8.2 5.6 Per capita energy consumption (toe) 1.18 2.17 3.34 4.50 4.88 4.97 7.0 4.9 Energy/GDP (toe/million Won) 0.31 0.29 0.32 0.31 0.28 0.28 −0.7 −0.13 CO2 emissions (million t-CO2) 136 239 367 474 516 545 6.5 4.5 CO2 emissions per capita (t-CO2) 3.51 5.57 8.14 9.90 10.7 11.2 5.3 3.8 GDP (trillion Korean Won) 148 321 467 691 831 850 10.2 6.1 Population (million) 38.7 42.9 45.1 47.8 48.5 48.7 1.2 0.72 Table options The paper is structured as follows. Section 2 examines South Korea's current energy profile including mid-term (2011–2016) and long-term (2010–2024) energy demands for different energy sources. The electricity outlook and capacity expansion plans are highlighted in this section, as well as the new projects and their influence on South Korea's future energy needs. Section 3 focuses on the external and internal factors that could affect the energy demand and supply. Section 4 discusses the implications of these factors on OPEC oil imports. Section 5 outlines South Korea's new strategy, which is known as “Low Carbon, Green Growth,” and how this new plan will help to mitigate climate change and expand on an international scale. Finally, in Section 6, concluding remarks are drawn from the analysis.

Energy demand will increase in all the sectors of the South Korean economy. However, South Korea intends to decrease the country's energy demand by setting policies to reduce energy dependence and substitute the shortage of traditional sources with cleaner energies. Investments in renewable energy should increase, but for now these investments are being supported by the government in order to satisfy 10% of the total national energy demand. This number seems hard to achieve since these investments do not seem to be increasing anytime soon as a result of lack of interest from private national investors. This is also why South Korea's green strategy will continue to be dependent on the public sector. Unless some policies are set by the government to put private investors under pressure and make them invest in green technologies. With South Korea's increasing demand for power generation and the lack of substitutes for oil when it comes to industry and transportation, oil dependence will not diminish. However, since policies are already set to decrease oil dependence, the consumption of coal will have to increase to satisfy the nation's demand. As for LNG, its demand will rise due to policies set to increase the use of cleaner energy sources, especially when the Russian pipeline is successfully operational. With regards to electricity, its demand will also rise due to its relatively low costs and convenience. Nuclear energy cannot be relied on since it is very vulnerable to natural disasters; therefore it cannot replace oil. Yet, the use of clean energy will continue to grow in South Korea but that does not mean that emissions will decrease. Emissions will actually increase even more due to the increase in power consumption. From the above discussion presented in the study, the factors affecting the energy demand in South Korea are both internal and external. Hence, these issues need urgent attention to be tackled in order for the country to reduce its oil dependence. Based on our analysis, most of the energy independence plans are unachievable in the coming decade. Hence, OPEC countries will continue meeting South Korea's oil needs for at least the next 5–10 years, until green energy is fully developed and its utilization constitute a significant percentage of the energy supply. Thus, oil supply from OPEC member countries will remain constant with an annual increase of 1–2%.