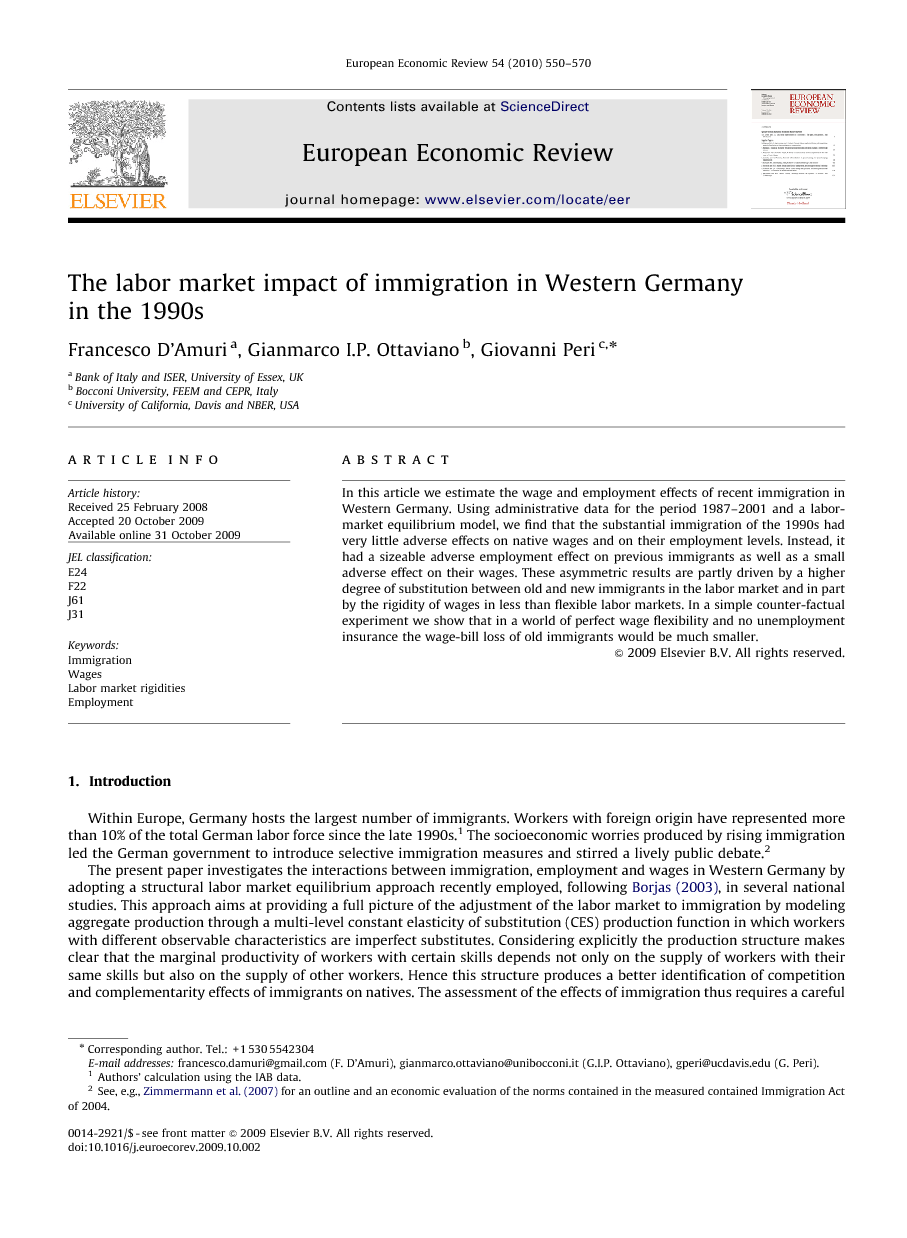 In this article we estimate the wage and employment effects of recent immigration in Western Germany. Using administrative data for the period 1987–2001 and a labor-market equilibrium model, we find that the substantial immigration of the 1990s had very little adverse effects on native wages and on their employment levels. Instead, it had a sizeable adverse employment effect on previous immigrants as well as a small adverse effect on their wages. These asymmetric results are partly driven by a higher degree of substitution between old and new immigrants in the labor market and in part by the rigidity of wages in less than flexible labor markets. In a simple counter-factual experiment we show that in a world of perfect wage flexibility and no unemployment insurance the wage-bill loss of old immigrants would be much smaller.

This paper contributes to the recently revived literature analyzing the impact of immigration within a labor market equilibrium framework fully accounting for the interactions between production factors (Aydemir and Borjas, 2007, Borjas, 2003, Manacorda et al., 2006, Ottaviano and Peri, 2008 and Peri, 2007). With respect to this literature, we have three novel contributions. First we produced new estimates of the elasticity parameters necessary to disentangle the wage effects of immigration on natives and old immigrants exploiting a large yearly panel of German workers, using yearly variations and relying on the (exogenous) large inflow of Eastern Germans after the fall of the Berlin Wall. Second, in order to better estimate the impact of new immigrants on old ones, we have extended the labor market equilibrium approach to allow for employment responses driven by wage rigidities. Taking these responses into account, we have been able to distinguish between the ‘direct effect’ of immigration, which refers to the change in wages taking place for given employment levels of natives and old immigrants, and the ‘indirect effect’, which refers to the change in wages due to changes in those employment levels. Third, using this model we have compared the aggregate wage-bill and unemployment insurance costs of the actual scenario, compared with a counter-factual scenario of full wage flexibility that preserves full employment. Looking at the employment effects of immigration, we have found that new immigration had a negative impact on the employment of old immigrants and no impact on the employment of natives, suggesting closer competition between new and old immigrants than between immigrants and natives as well as different insider–outsider status of natives and immigrants. The estimated wage effects of new immigrants are on average very small for natives and small and negative for old immigrants. The most statistically and economically significant impact of new immigration is the negative employment effect on old immigrants driven by wage rigidities.