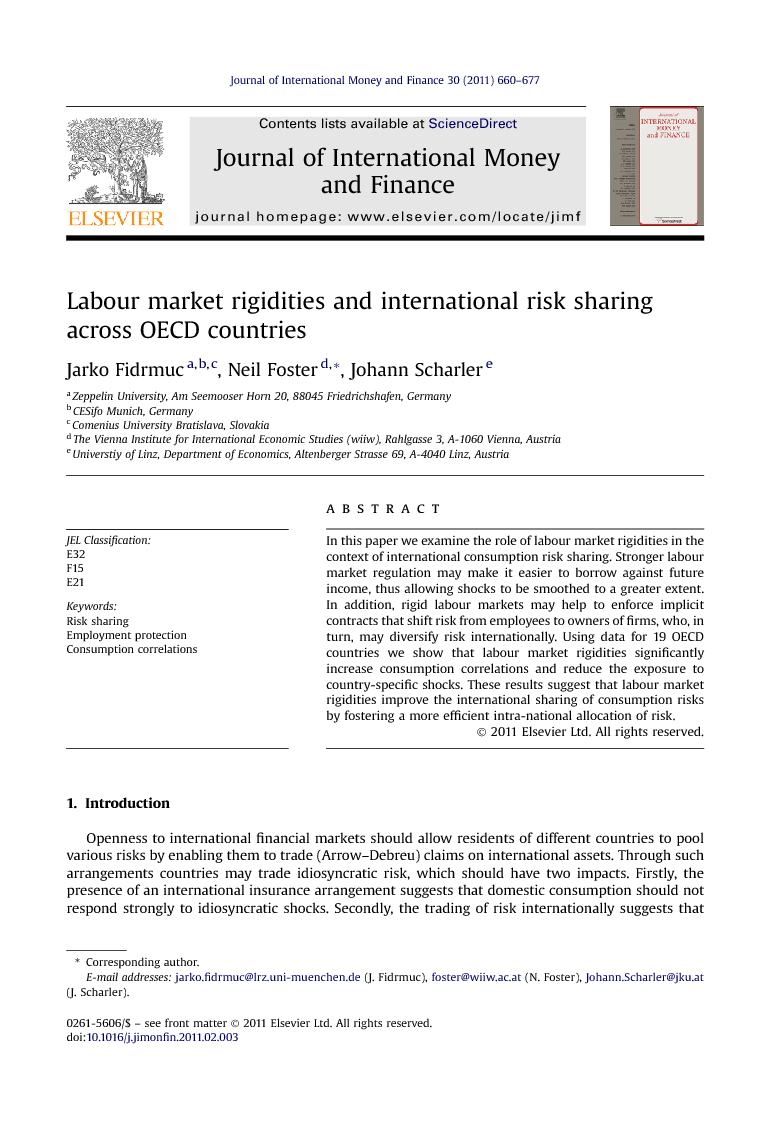 Openness to international financial markets should allow residents of different countries to pool various risks by enabling them to trade (Arrow–Debreu) claims on international assets. Through such arrangements countries may trade idiosyncratic risk, which should have two impacts. Firstly, the presence of an international insurance arrangement suggests that domestic consumption should not respond strongly to idiosyncratic shocks. Secondly, the trading of risk internationally suggests that consumption growth rates should be highly correlated across countries (see for example Lewis, 1999 and Obstfeld and Rogoff, 2000). Empirical evidence however strongly indicates that international risk sharing is rather limited. Ambler et al. (2004) argue that the high consumption correlations obtained in theoretical models are a major puzzle for international business cycle models and their most important shortcoming when compared to real world data. A number of solutions to this puzzle have been proposed in the literature. Specific examples concentrating on the consumption correlation puzzle include Backus et al. (1992) who allow for optimal capital investment and leisure choice in a Real Business Cycle model with productivity shocks. Their model suggests lower than perfect consumption correlations, but the predicted correlation is still higher than that found in the data. Kehoe and Perri (2002) develop a model with limited contract enforceability that leads to endogenously incomplete markets. Their model generates consumption correlations that are also substantially lower than in a complete markets model. Other proposed solutions include Stockman and Tesar (1995) who show that taste shocks in consumption potentially explain why international consumption correlations are low and Baxter and Crucini (1995) who argue that a complete markets model can generate low consumption correlations if shocks are persistent. This last solution has been emphasized by Becker and Hoffmann (2006) and Artis and Hoffmann (2008) who argue that persistent shocks are harder to insure and require more elabourate financial markets. Taken in isolation however none of these proposals would appear to give a complete explanation of the consumption correlation puzzle, though Lewis (1996) finds that allowing for the presence of both non-traded goods and institutional restrictions on capital flows can explain the limited amount of risk sharing between countries. A final explanation explored by Lewis (1999) and Obstfeld (1994) relates to the possibility that the gains from risk sharing are too small to encourage diversification. In this paper, we propose and test another explanation for the lack of international risk sharing. In particular, we examine whether the regulation of domestic labour markets has implications for the international sharing of consumption risk. Our analysis is motivated by the observation that financial markets offer only very limited opportunities to insure risks related to labour income. Therefore, labour contracts may implicitly include insurance arrangements, with risk being shifted from labour income to profits (Azariadis, 1975). Workers will generally pay for such insurance through a lower average, though less volatile, wage. Such arrangements may be efficient, since any risk associated with profit income can be diversified more easily on domestic and international financial markets. Our main hypothesis therefore is that insurance elements included in labour contracts lead to a more efficient intra-national allocation of risk, thereby fostering the international sharing of consumption risk. Since labour income risk typically accounts for a non-negligible portion of total risk, we argue that the lack of risk sharing at the international level may essentially be the consequence of the non-diversifiabitliy of labour income risk. Highly regulated labour markets, by enforcing the insurance aspect of labour contracts and by shifting risk from wages to profits, may lead to greater international risk sharing if profit income is easier to diversify on capital markets. In addition, stronger labour market regulations may make future expected income streams less volatile. As such, future income can be used as collateral, providing workers with access to credit markets. Consequently, agents are able to smooth shocks by adjusting their net asset position. The easier access to credit markets provides a further channel through which labour market regulation may influence the amount of risk sharing that can be achieved. The main result from our empirical analysis is that more rigid labour markets, which we proxy by the strictness of employment protection legislation, tend to increase the international correlation of consumption growth rates and reduce the exposure to country-specific output growth fluctuations. Thus, despite possible negative impacts on macroeconomic performance (Nickell, 1997), stronger labour market protection appears to improve the international sharing of consumption risk. We are also able to show by splitting our index of employment protection regulation in to sub-categories that much of the impact of regulation on international risk sharing comes through regulations on temporary employment. This result is in line with the conclusion that stronger labour market regulations encourage risk sharing within and across countries by making future income more predictable. Given that temporary workers are less likely to have access to credit due to their incomes being less secure, stronger regulations on temporary employment by either making the income of temporary workers more secure or by reducing the extent of temporary employment, would allow income to be used as collateral. In Section 2 we discuss the theoretical motivation for our model. Section 3 discusses the model specification, while Section 4 describes the data and the variable definitions. Section 5 presents and discusses our results and additional robustness tests and Section 6 concludes the paper.