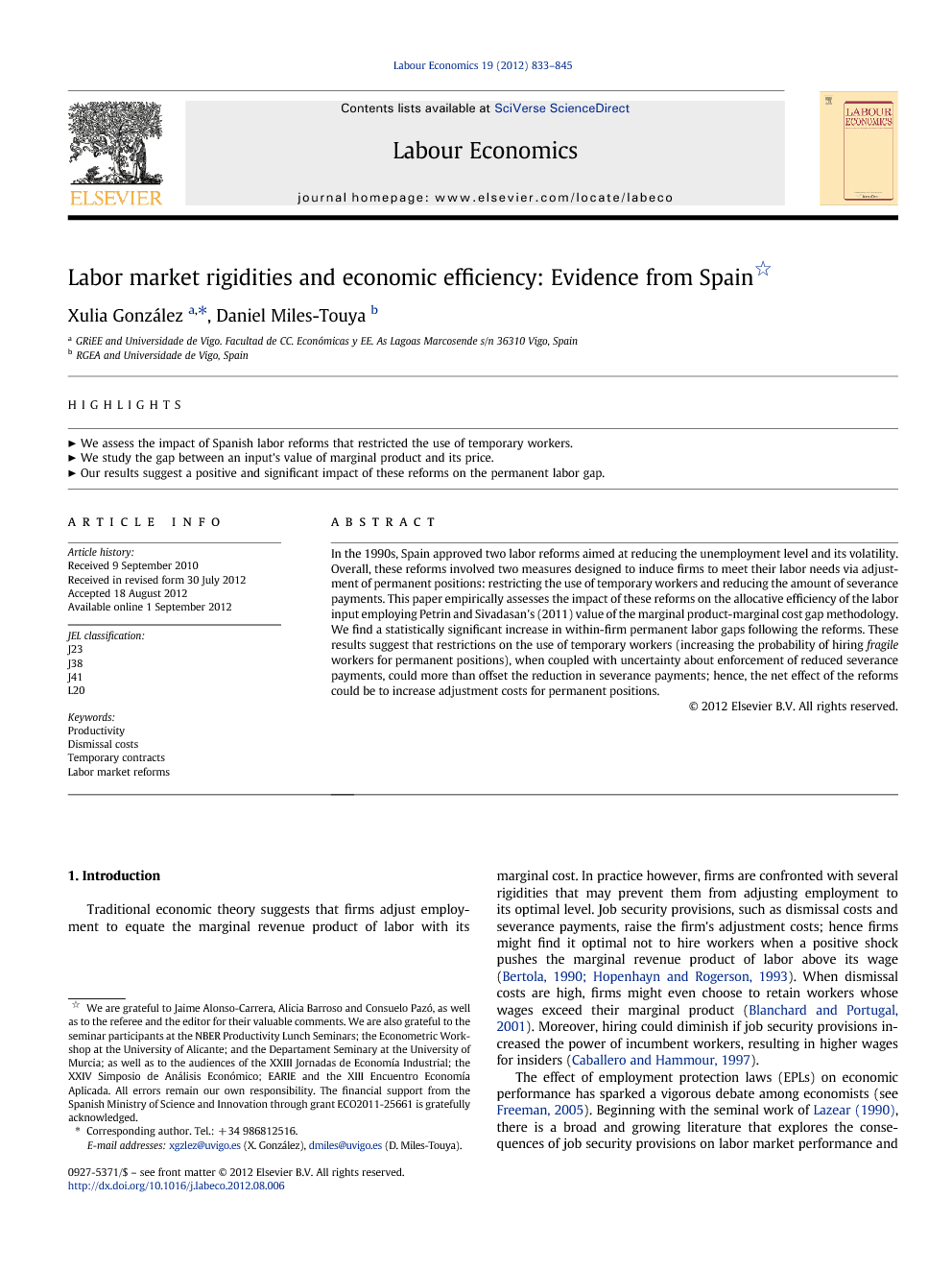 In the 1990s, Spain approved two labor reforms aimed at reducing the unemployment level and its volatility. Overall, these reforms involved two measures designed to induce firms to meet their labor needs via adjustment of permanent positions: restricting the use of temporary workers and reducing the amount of severance payments. This paper empirically assesses the impact of these reforms on the allocative efficiency of the labor input employing Petrin and Sivadasan's (2011) value of the marginal product-marginal cost gap methodology. We find a statistically significant increase in within-firm permanent labor gaps following the reforms. These results suggest that restrictions on the use of temporary workers (increasing the probability of hiring fragile workers for permanent positions), when coupled with uncertainty about enforcement of reduced severance payments, could more than offset the reduction in severance payments; hence, the net effect of the reforms could be to increase adjustment costs for permanent positions.

In the 1990s, Spain enacted two labor reforms intended to diminish the unemployment level and employment volatility. In particular, measures were introduced that aimed at inducing firms to meet their changing labor needs by the adjustment of permanent positions: the use of temporary workers was restricted, and the amount of severance payments was reduced. In the 1994 reform, the government restricted the use of temporary workers but did not modify any regulations affecting permanent labor. In the 1997 reform, the government further restricted the use of temporary workers and also introduced a new type of indefinite term contract, with lower severance payments, to be used for all new hires. In this paper we study whether or not firms, in the wake of these reforms, fully adjusted their permanent positions to the firm's actual labor needs—in particular, we look for evidence of an increase in firms' expected adjustment costs. Toward this end, we analyze the allocative efficiency impact of these reforms by using Petrin and Sivadasan's (2011) methodology for evaluating gaps between the marginal product and the marginal cost. That methodology is based on analysis of the mean absolute gap between the input price and the value of the marginal product. This mean absolute gap corresponds to the mean change in aggregate productivity that would result from making an optimal adjustment to the input. Our findings suggest that the Spanish labor reforms did affect the allocative efficiency of the permanent labor input. We interpret these results as implying that the expected labor adjustment costs increased when the severe restrictions on using temporary workers were not accompanied by a sufficient reduction in the severance payments due to permanent workers.