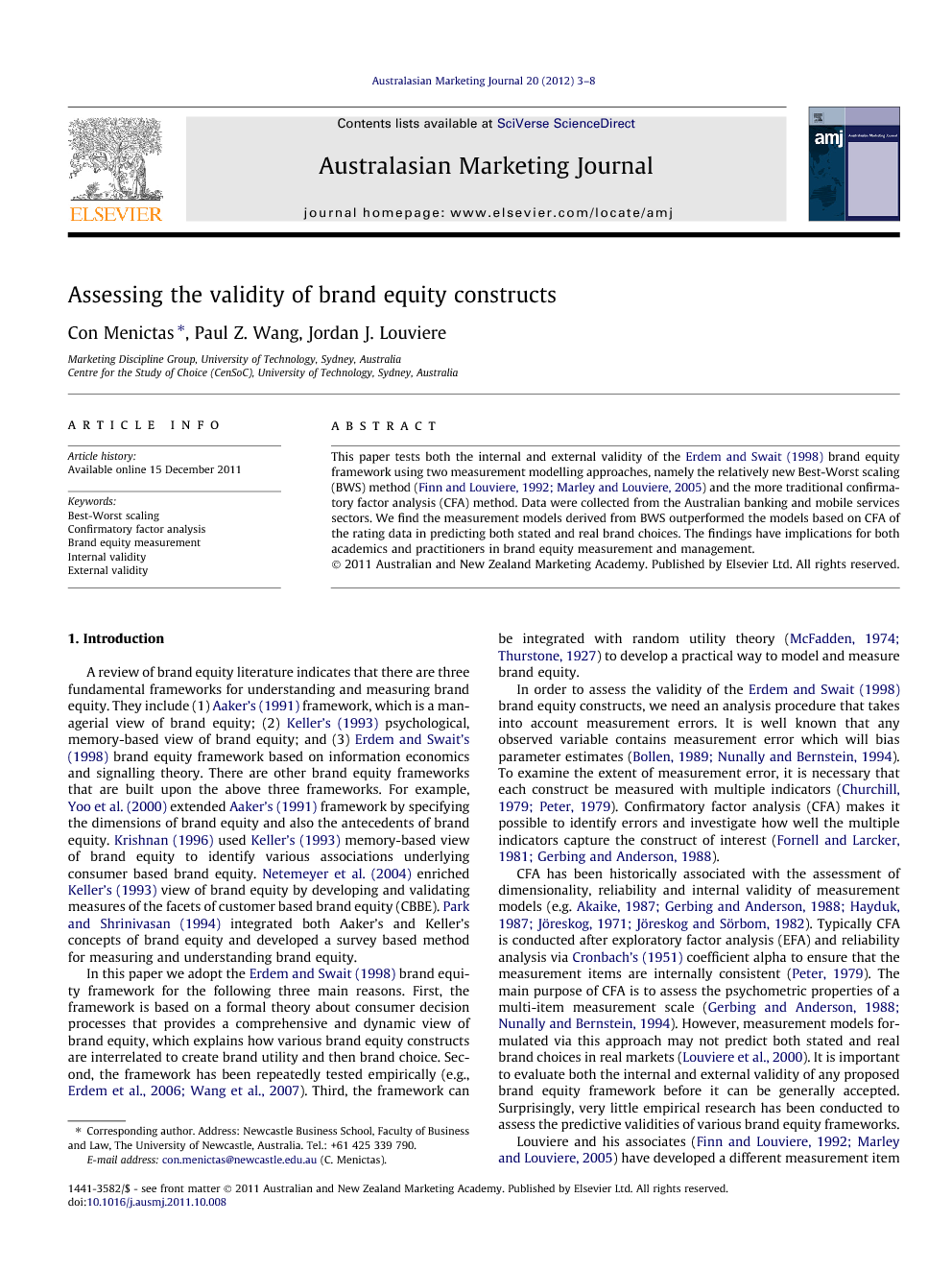 This paper tests both the internal and external validity of the Erdem and Swait (1998) brand equity framework using two measurement modelling approaches, namely the relatively new Best-Worst scaling (BWS) method (Finn and Louviere, 1992 and Marley and Louviere, 2005) and the more traditional confirmatory factor analysis (CFA) method. Data were collected from the Australian banking and mobile services sectors. We find the measurement models derived from BWS outperformed the models based on CFA of the rating data in predicting both stated and real brand choices. The findings have implications for both academics and practitioners in brand equity measurement and management.

A review of brand equity literature indicates that there are three fundamental frameworks for understanding and measuring brand equity. They include (1) Aaker’s (1991) framework, which is a managerial view of brand equity; (2) Keller’s (1993) psychological, memory-based view of brand equity; and (3) Erdem and Swait’s (1998) brand equity framework based on information economics and signalling theory. There are other brand equity frameworks that are built upon the above three frameworks. For example, Yoo et al. (2000) extended Aaker’s (1991) framework by specifying the dimensions of brand equity and also the antecedents of brand equity. Krishnan (1996) used Keller’s (1993) memory-based view of brand equity to identify various associations underlying consumer based brand equity. Netemeyer et al. (2004) enriched Keller’s (1993) view of brand equity by developing and validating measures of the facets of customer based brand equity (CBBE). Park and Shrinivasan (1994) integrated both Aaker’s and Keller’s concepts of brand equity and developed a survey based method for measuring and understanding brand equity. In this paper we adopt the Erdem and Swait (1998) brand equity framework for the following three main reasons. First, the framework is based on a formal theory about consumer decision processes that provides a comprehensive and dynamic view of brand equity, which explains how various brand equity constructs are interrelated to create brand utility and then brand choice. Second, the framework has been repeatedly tested empirically (e.g., Erdem et al., 2006 and Wang et al., 2007). Third, the framework can be integrated with random utility theory (McFadden, 1974 and Thurstone, 1927) to develop a practical way to model and measure brand equity. In order to assess the validity of the Erdem and Swait (1998) brand equity constructs, we need an analysis procedure that takes into account measurement errors. It is well known that any observed variable contains measurement error which will bias parameter estimates (Bollen, 1989 and Nunally and Bernstein, 1994). To examine the extent of measurement error, it is necessary that each construct be measured with multiple indicators (Churchill, 1979 and Peter, 1979). Confirmatory factor analysis (CFA) makes it possible to identify errors and investigate how well the multiple indicators capture the construct of interest (Fornell and Larcker, 1981 and Gerbing and Anderson, 1988). CFA has been historically associated with the assessment of dimensionality, reliability and internal validity of measurement models (e.g. Akaike, 1987, Gerbing and Anderson, 1988, Hayduk, 1987, Jöreskog, 1971 and Jöreskog and Sörbom, 1982). Typically CFA is conducted after exploratory factor analysis (EFA) and reliability analysis via Cronbach’s (1951) coefficient alpha to ensure that the measurement items are internally consistent (Peter, 1979). The main purpose of CFA is to assess the psychometric properties of a multi-item measurement scale (Gerbing and Anderson, 1988 and Nunally and Bernstein, 1994). However, measurement models formulated via this approach may not predict both stated and real brand choices in real markets (Louviere et al., 2000). It is important to evaluate both the internal and external validity of any proposed brand equity framework before it can be generally accepted. Surprisingly, very little empirical research has been conducted to assess the predictive validities of various brand equity frameworks. Louviere and his associates (Finn and Louviere, 1992 and Marley and Louviere, 2005) have developed a different measurement item selection approach to CFA, known as Best-Worst scaling (BWS), also known as Maximum difference (Max-Diff) scaling (Almquist and Lee, 2009). It uses experimental designs to manipulate the presence or absence of items in a choice task. As such, we use BWS to select measurement items to represent various constructs in the Erdem and Swait (1998) brand equity framework. We then compare this new BWS approach to that of traditional CFA, for predicting both stated and real brand choices in real markets. To the best of our knowledge, this form of comparison has yet to be conducted. We believe this comparison deserves empirical investigation, as it has the potential to advance our knowledge in the brand equity scale development literature. The remainder of this paper is organized as follows: we first introduce the Erdem and Swait (1998) brand equity framework. Second, we describe the two research methods used in this study, namely the CFA and BWS approaches. We also report the data collection process and the testing method for internal and external validity. Third, we present the conditional logit model results to examine the internal and external validity of our two methods. Finally, we discuss this study’s implications and directions for further research.

This paper has compared the predictive performance between the new BWS approach and the more traditional CFA measurement model approach across two service categories, namely the banking transaction account service category and the mobile phone network services category. One of the reasons we chose banking and mobile phones categories is because they represent two of the most popular service categories. For instance, Mari (2008) noted that mobile banking would attract 110 million users in Europe and 80 million users in North America by 2014. Mobile handsets are in an excellent position to become the primary digital channel for providers of banking and related financial services on emerging markets. Similarly, Nash (2008) noted that the future of mobile phone technology is limitless. Mobile phones are likely to eliminate the need for any land based phone systems. As technology increases, mobile phones will quickly become smaller in size, more versatile and highly adaptable. Although measurement models built by the traditional CFA method may satisfy various psychometric criteria for model fit such as coefficient alpha, convergent validity, and discriminant validity, our results suggest that the CFA method may not exhibit either internal or external validity as well as our proposed BWS method does. As noted by Cohen, 2003, Lee et al., 2007 and Lee et al., 2008, BWS has been found to overcome response style bias associated with the CFA method, due to CFA’s reliance on the use of rating scales. When using rating scales, each respondent may use the rating scale in their own unique way. Respondents are notorious for rating measurement items very rapidly, using simplification heuristics so that they may speed through the task. Some respondents may use the extreme ends of the rating scale, whilst others may spread their ratings across the entire scale range, yet others may rate the scale towards the centre of the scale (Steenkamp et al., 2010). This may and oftentimes does, result in low discrimination amongst rating scales. In contrast, BWS requires respondents to make trade-offs amongst the measurement items (Marley and Louviere, 2005). By so doing, we force respondents to evaluate the measurement items in exactly the same way, thus avoiding response style bias (Auger et al., 2007). As a result, the BWS approach is gaining popularity especially in the commercial marketing research community (Almquist and Lee, 2009). In summary, this paper contributes to the scale development literature in general and the Erdem and Swait (1998) theoretical framework of brand equity in particular. We have developed a new and promising alternative to the dominant paradigm of CFA for selecting multiple indicators for an unobserved construct, such as the six brand equity constructs discussed in this paper. Many if not most marketing constructs, for example customer satisfaction, marketing orientation, and service quality, have many facets and cannot be directly observed. They can only be measured through valid indicators. The ultimate validity check is to test whether marketing constructs can predict real choices in real markets. To the best of our knowledge, our research represents one of few studies that test such external validity of marketing constructs. Although we found that BWS outperformed CFA for both internal and external validity tests, we are not suggesting that the BWS method is a substitute for the CFA method in all cases, as we believe the latter has its rightful place in theory testing (Bagozzi and Yi, 1989 and Bollen, 1989). As the first study of its kind, this paper provides a starting point for further comparative research in this area. To enhance the generalizability of our research findings, it is worthwhile to replicate the study across various research contexts, such as different product categories and different cultural settings. Another avenue for future research is to compare BWS with item response theory (IRT) or Rasch modelling which overcomes measurement invariance problems associated with CFA (Andrich, 1988 and Bond and Fox, 2001). Nevertheless, we believe that in commercial applications BWS can play a very important role to predict real market choices. This is because BWS requires fewer statistical assumptions and is simple to develop and test when compared to CFA or Rasch modelling.