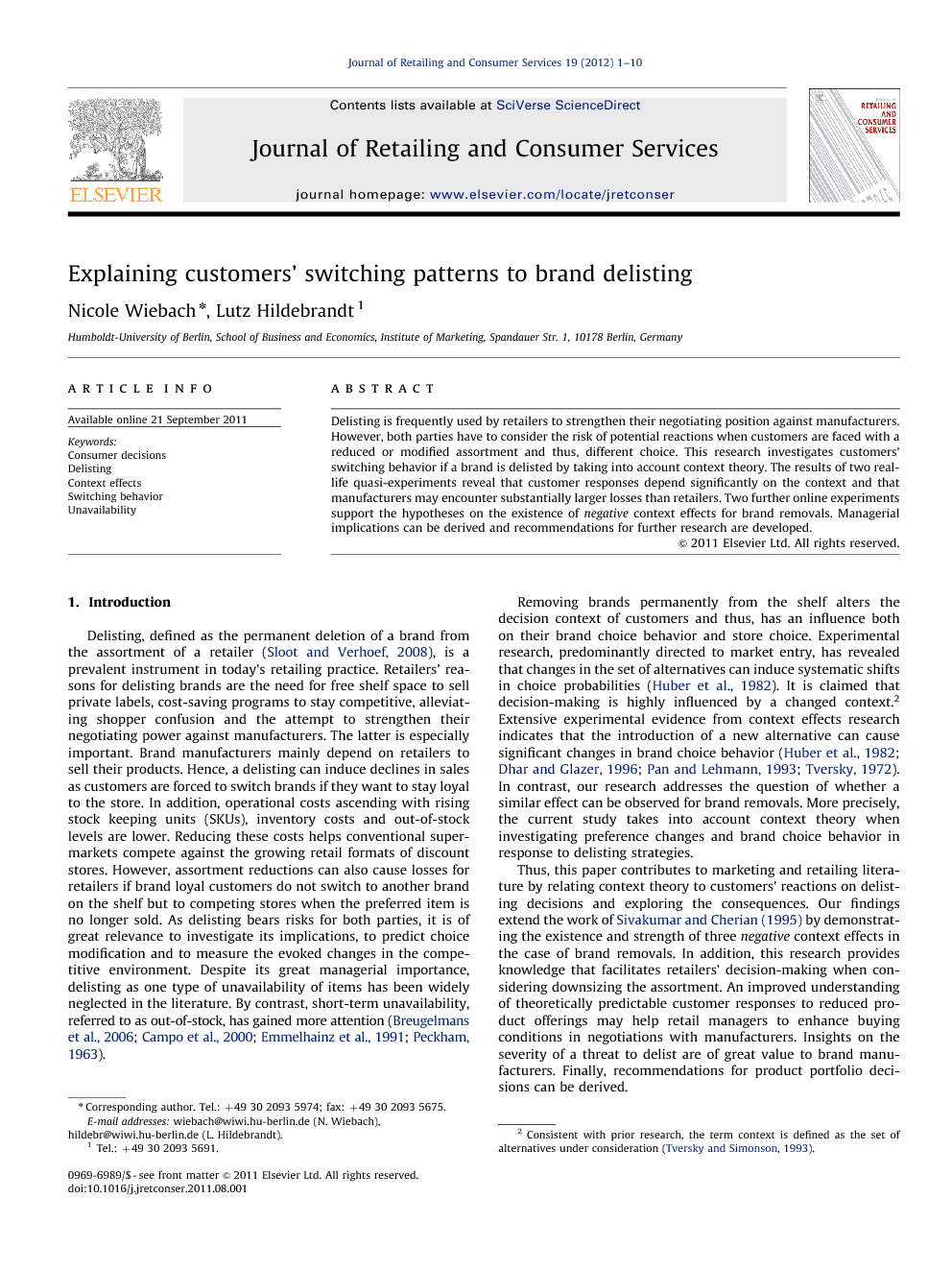 Delisting is frequently used by retailers to strengthen their negotiating position against manufacturers. However, both parties have to consider the risk of potential reactions when customers are faced with a reduced or modified assortment and thus, different choice. This research investigates customers' switching behavior if a brand is delisted by taking into account context theory. The results of two real-life quasi-experiments reveal that customer responses depend significantly on the context and that manufacturers may encounter substantially larger losses than retailers. Two further online experiments support the hypotheses on the existence of negative context effects for brand removals. Managerial implications can be derived and recommendations for further research are developed.

Delisting, defined as the permanent deletion of a brand from the assortment of a retailer (Sloot and Verhoef, 2008), is a prevalent instrument in today's retailing practice. Retailers' reasons for delisting brands are the need for free shelf space to sell private labels, cost-saving programs to stay competitive, alleviating shopper confusion and the attempt to strengthen their negotiating power against manufacturers. The latter is especially important. Brand manufacturers mainly depend on retailers to sell their products. Hence, a delisting can induce declines in sales as customers are forced to switch brands if they want to stay loyal to the store. In addition, operational costs ascending with rising stock keeping units (SKUs), inventory costs and out-of-stock levels are lower. Reducing these costs helps conventional supermarkets compete against the growing retail formats of discount stores. However, assortment reductions can also cause losses for retailers if brand loyal customers do not switch to another brand on the shelf but to competing stores when the preferred item is no longer sold. As delisting bears risks for both parties, it is of great relevance to investigate its implications, to predict choice modification and to measure the evoked changes in the competitive environment. Despite its great managerial importance, delisting as one type of unavailability of items has been widely neglected in the literature. By contrast, short-term unavailability, referred to as out-of-stock, has gained more attention (Breugelmans et al., 2006, Campo et al., 2000, Emmelhainz et al., 1991 and Peckham, 1963). Removing brands permanently from the shelf alters the decision context of customers and thus, has an influence both on their brand choice behavior and store choice. Experimental research, predominantly directed to market entry, has revealed that changes in the set of alternatives can induce systematic shifts in choice probabilities (Huber et al., 1982). It is claimed that decision-making is highly influenced by a changed context.2 Extensive experimental evidence from context effects research indicates that the introduction of a new alternative can cause significant changes in brand choice behavior (Huber et al., 1982, Dhar and Glazer, 1996, Pan and Lehman, 1993 and Tversky, 1972). In contrast, our research addresses the question of whether a similar effect can be observed for brand removals. More precisely, the current study takes into account context theory when investigating preference changes and brand choice behavior in response to delisting strategies. Thus, this paper contributes to marketing and retailing literature by relating context theory to customers' reactions on delisting decisions and exploring the consequences. Our findings extend the work of Sivakumar and Cherian (1995) by demonstrating the existence and strength of three negative context effects in the case of brand removals. In addition, this research provides knowledge that facilitates retailers' decision-making when considering downsizing the assortment. An improved understanding of theoretically predictable customer responses to reduced product offerings may help retail managers to enhance buying conditions in negotiations with manufacturers. Insights on the severity of a threat to delist are of great value to brand manufacturers. Finally, recommendations for product portfolio decisions can be derived. The article is organized as follows: Prior research on permanent assortment reductions is reviewed in the next section. Then, the theoretical background on context-dependent preferences is briefly presented, our research objectives are specified and hypotheses are developed. In Section 4, four empirical studies examine the shifts in choice probabilities when brands are removed. We conclude with a discussion of our key findings and an outlook on future research.

Our paper provides evidence that the widely discussed context effects for an expansion of the choice set are also present in situations when items or brands are removed. In particular, the meaningful impact of unavailable options on preferences and consequently choice behavior is shown. Thereby, rational principles of choice are violated. The current research reveals that removing “dominated”, “similar” or “extreme” alternatives from the shelf affects the choice shares of the remaining brands in a theory-based predictable way. Our findings contribute to marketing literature on context effects by empirically documenting the impact of choice set reduction on preference shifts in several FMCG categories as well as for durables. By considering real-life examples, our findings make context effects and negative context effects more relevant to managers. They should take these effects into account when deciding on the reduction of their assortments and brand portfolios, respectively. 5.1. Managerial implications The results of the two real-life quasi-experiments illustrate that delisting can harm the manufacturer. In Study 1, the food manufacturer of brands A and B lost a remarkable portion of its customers (−18.09 percent) because many respondents decided to switch brands rather than moving to sub-brands. In the second choice scenario, only 32.15 percent of the previous buyers of brand A selected brand B (from the same food company), indicating loyalty to the company. By contrast, the competitor brand (C) benefited most from the removal of brand A. It adopted the major portion of recent buyers of brand A and also kept its own customers. The same behavioral pattern was observable in the second study. Only 15.81 percent of the participants intended to switch the store to buy their preferred but delisted brand. On the contrary, the major rival managed to more than double its choice share. The results also indicate that even if it is typically the retailer who decides on delisting of brands, the retail brand may not be the winner in the competitive situation. To evaluate the specific impacts on retailers' returns further information on realized margins would be needed. However, we can conclude that sales were not so highly affected since, in each study nearly all subjects decided in favor of substitution rather than switching stores. The robust negative similarity effect, which was demonstrated in three studies, recommends retailers to always offer a similar alternative to keep customers in the sore. Consequently, both retailers and manufacturers should pay attention to the competition environment and employ consolidated findings on the context-dependence of choice when deciding and negotiating on prices and shelf space. 5.2. Limitation and future research A major limitation of our research is that the results are based only on reported delisting responses. Despite the fact that data collection by means of a questionnaire can be criticized in different ways, a substantial advantage of questionnaires over real choices represents the possibility to differentiate clearly between the potential reactions. In addition, surveys allow collecting supplementary information, which can be utilized to explain stated behavior. In our experiments, respondents faced a hypothetical delisting situation, which altogether may lower the external validity. However, the questionnaire allows us to collect relevant information necessary to address the specific research objective. There is broad support in the literature that hypothetical and real choices can lead to the same results (Kühberger et al., 2002 and Wiseman and Levin, 1996). Furthermore, the hypotheses were tested by means of aggregated data. The analysis covered four different product categories, and choice was limited to four-item and three-item choice sets. These boundaries generate opportunities for future research. The findings have to be generalized by examining more categories in a real-world shopping situation. Scanner panel data across stores could enable the development of a tool to determine consequences and practical implications for manufacturers and retailers prior to brand delistings. Developing effective strategies to manage dissatisfaction due to delistings would be another useful and interesting area to explore. For instance, is suggesting an available alternative a positive or negative approach? Should retailers communicate that a brand is going to be delisted? Should they offer an equivalent store brand? Besides this operational objective, additional moderators should be included when analyzing the outcome of a delisting strategy. A model that analyzes the drivers of brand choice can be used to cover complex relationships between major antecedents and constructs related to the delisting effects.