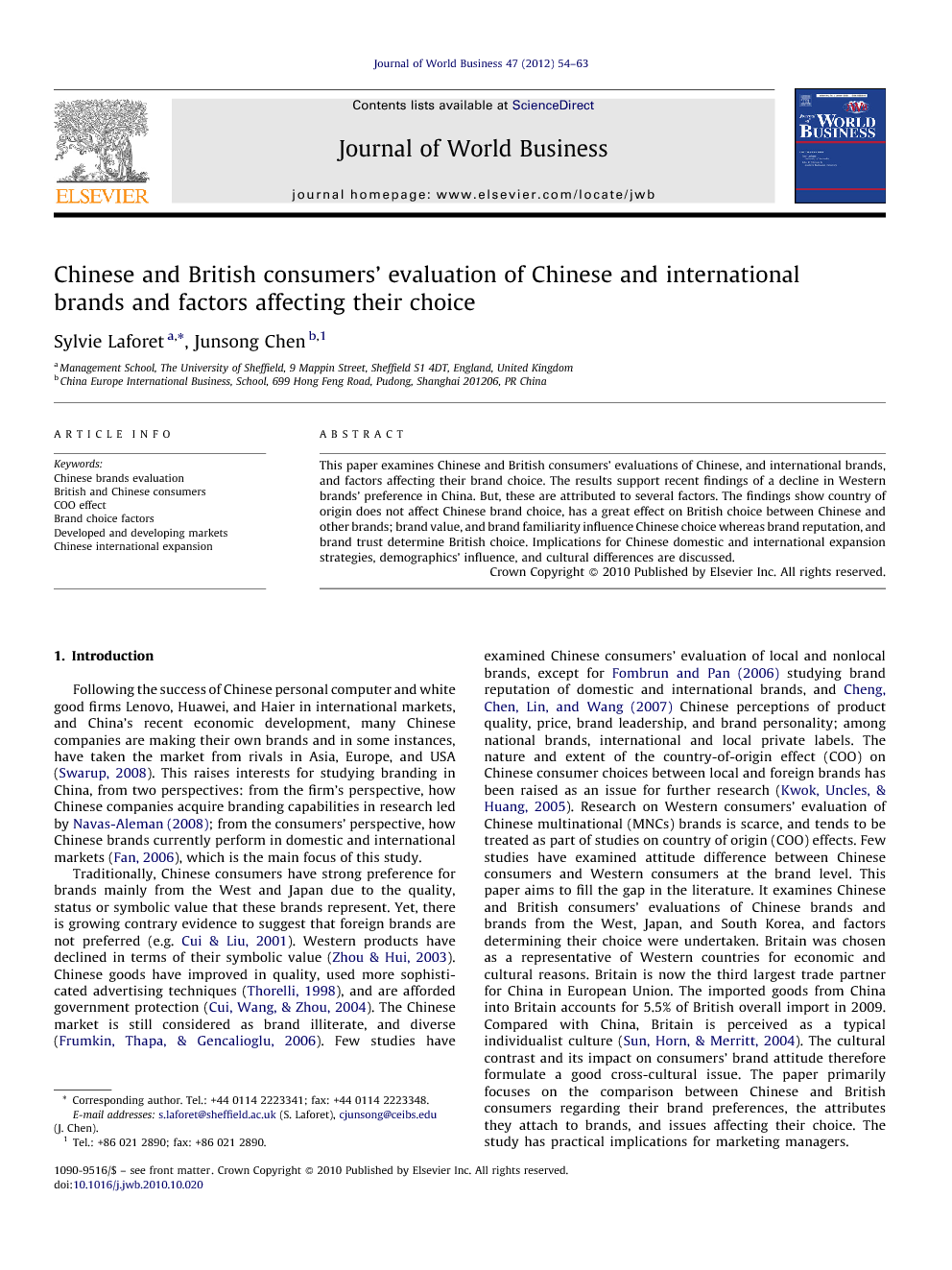 This paper examines Chinese and British consumers’ evaluations of Chinese, and international brands, and factors affecting their brand choice. The results support recent findings of a decline in Western brands’ preference in China. But, these are attributed to several factors. The findings show country of origin does not affect Chinese brand choice, has a great effect on British choice between Chinese and other brands; brand value, and brand familiarity influence Chinese choice whereas brand reputation, and brand trust determine British choice. Implications for Chinese domestic and international expansion strategies, demographics’ influence, and cultural differences are discussed.

Following the success of Chinese personal computer and white good firms Lenovo, Huawei, and Haier in international markets, and China's recent economic development, many Chinese companies are making their own brands and in some instances, have taken the market from rivals in Asia, Europe, and USA (Swarup, 2008). This raises interests for studying branding in China, from two perspectives: from the firm's perspective, how Chinese companies acquire branding capabilities in research led by Navas-Aleman (2008); from the consumers’ perspective, how Chinese brands currently perform in domestic and international markets (Fan, 2006), which is the main focus of this study. Traditionally, Chinese consumers have strong preference for brands mainly from the West and Japan due to the quality, status or symbolic value that these brands represent. Yet, there is growing contrary evidence to suggest that foreign brands are not preferred (e.g. Cui & Liu, 2001). Western products have declined in terms of their symbolic value (Zhou & Hui, 2003). Chinese goods have improved in quality, used more sophisticated advertising techniques (Thorelli, 1998), and are afforded government protection (Cui, Wang, & Zhou, 2004). The Chinese market is still considered as brand illiterate, and diverse (Frumkin, Thapa, & Gencalioglu, 2006). Few studies have examined Chinese consumers’ evaluation of local and nonlocal brands, except for Fombrun and Pan (2006) studying brand reputation of domestic and international brands, and Cheng, Chen, Lin, and Wang (2007) Chinese perceptions of product quality, price, brand leadership, and brand personality; among national brands, international and local private labels. The nature and extent of the country-of-origin effect (COO) on Chinese consumer choices between local and foreign brands has been raised as an issue for further research (Kwok, Uncles, & Huang, 2005). Research on Western consumers’ evaluation of Chinese multinational (MNCs) brands is scarce, and tends to be treated as part of studies on country of origin (COO) effects. Few studies have examined attitude difference between Chinese consumers and Western consumers at the brand level. This paper aims to fill the gap in the literature. It examines Chinese and British consumers’ evaluations of Chinese brands and brands from the West, Japan, and South Korea, and factors determining their choice were undertaken. Britain was chosen as a representative of Western countries for economic and cultural reasons. Britain is now the third largest trade partner for China in European Union. The imported goods from China into Britain accounts for 5.5% of British overall import in 2009. Compared with China, Britain is perceived as a typical individualist culture (Sun, Horn, & Merritt, 2004). The cultural contrast and its impact on consumers’ brand attitude therefore formulate a good cross-cultural issue. The paper primarily focuses on the comparison between Chinese and British consumers regarding their brand preferences, the attributes they attach to brands, and issues affecting their choice. The study has practical implications for marketing managers.

The purpose of the study has been to ascertain how Chinese brands currently perform in their domestic and international markets, given China's recent economic development and the success of Chinese brands abroad, by examining Chinese and British consumers’ evaluations of Chinese brands, and those from the West, Japan, and South Korea. The study has contributed to research on COO effects, and branding in China. It has extended existing research on Chinese consumers’ evaluations of local versus nonlocal brands, and has advanced research on COO effects on Chinese consumer choice between local and Western brands. As well as providing valuable insights of Chinese and British consumers. Thus, the study has furthered the understanding of consumers in MDCs and LDCs. By comparing Chinese and British consumers’ brand preferences, the attributes they attach to brands, and the factors affecting their choice. The study has found significant differences between Chinese and British consumers’ brand choice, and purchase. The self-concept and social image do not affect Chinese brand choice whereas they do the British consumers. The study has opposed past literature associating Chinese preference for Western brands with the concept of face. It has also shown COO does not affect Chinese choice between local and nonlocal including, Western brands. However, British negative perception of China has a great effect on their brand choice. Thus, Chinese firms are recommended to focus on domestic market in the first instance. The study has not found support for collectivism and individualism cultural theories, and their effects on consumer buying decision-making, and brand selection. The study tends to agree with Kwok et al. (2005) that China's rapid economic and social developments have likely altered Chinese consumers’ attitudes, to local and foreign brands. However, to confirm this proposition, surveys of other regions of China must be conducted. Future research should also focus on other cities of China to seek if the same pattern occurs elsewhere, and compare with other LDCs. The study's limitation is its concentration on one city of China, and use of certain brands from China, Japan, the West, and South Korea; although these brands are major international brands.