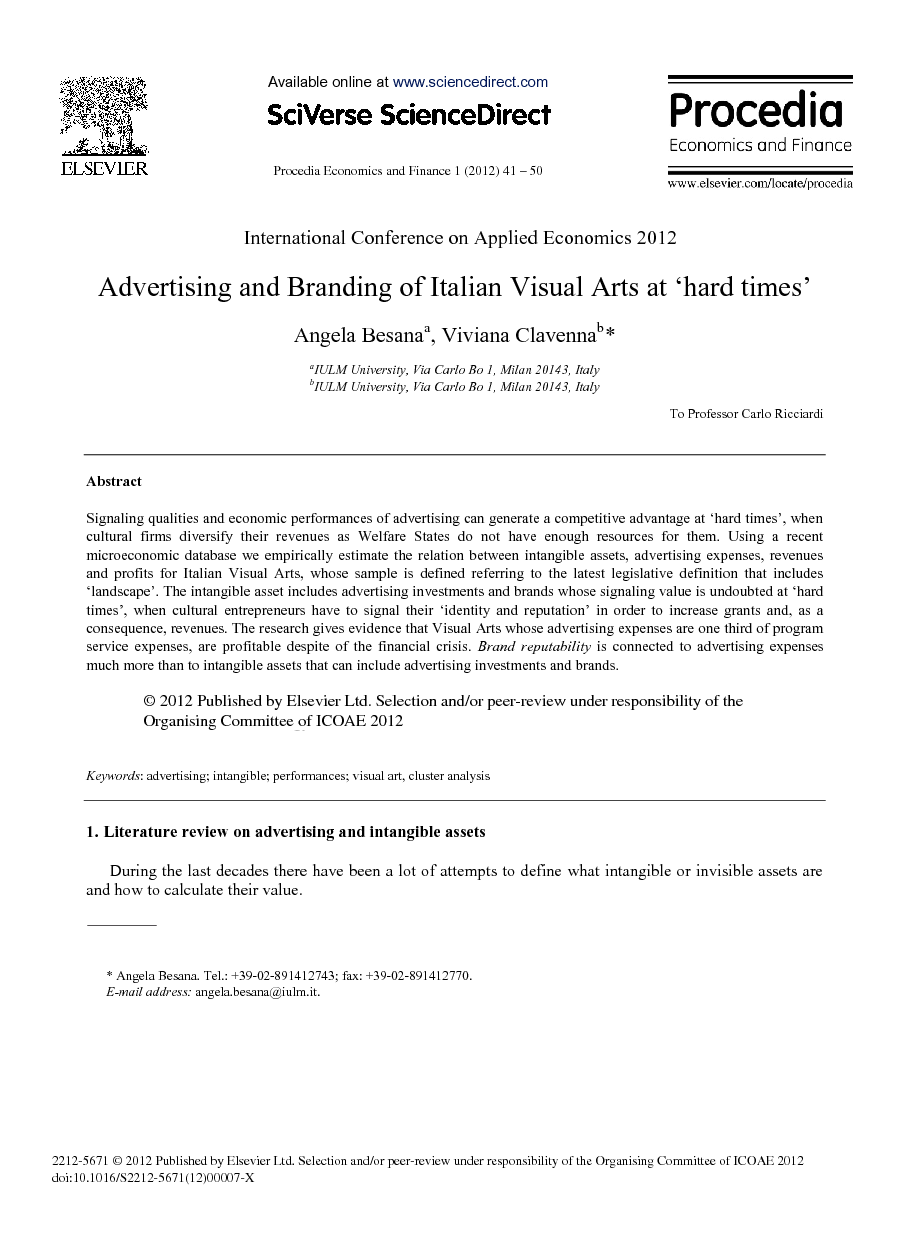 Signaling qualities and economic performances of advertising can generate a competitive advantage at ‘hard times’, when cultural firms diversify their revenues as Welfare States do not have enough resources for them. Using a recent microeconomic database we empirically estimate the relation between intangible assets, advertising expenses, revenues and profits for Italian Visual Arts, whose sample is defined referring to the latest legislative definition that includes ‘landscape’. The intangible asset includes advertising investments and brands whose signaling value is undoubted at ‘hard times’, when cultural entrepreneurs have to signal their ‘identity and reputation’ in order to increase grants and, as a consequence, revenues. The research gives evidence that Visual Arts whose advertising expenses are one third of program service expenses, are profitable despite of the financial crisis. Brand reputability is connected to advertising expenses much more than to intangible assets that can include advertising investments and brands.

During the last decades there have been a lot of attempts to define what intangible or invisible assets are and how to calculate their value. The first literature and empirical res earch dealing with intangibles have already considered the importance of advertising.The importance of advertising – the advertising expense and the advertising investment - had previously received attention by the literature of industrial organization and applied economics as for signaling qualities (Dorfman and Steiner 1954; Kihlstrom and Riordan 1984), market structure and performances (Comanor and Wilson 1967; Sutton 1991, Daves and Tucker 1993; Da ughety and Reinganum2008) brand recognition and information (Caves and Green 1996).One of the pioneering studies on the relationship be tween advertising and intangible is “La pubblicitànell’economia dell’azienda industriale” by Guatri (1964). In this book Guatri is discussing of ‘investments’ in advertising. This can be considered one of the first attempt to measure intangibles connected with marketing.Guatri explains that through means of advertising investments, brands and reputation are built which leads toa competitive advantage. This is a marketing investment whose benefits are deferred in time.During the 80s, the valuation, defi nition and estimates of intangibleassets had a strong development both in banking, distribution and insurance market, in the press and in the service industry. One of the most considered definitions of intangible assets is Itami’s. Itami (1984) says that the invisible asset refers to “resources based on information”. According to the author, firms are in the centre of a flow of information created by people that generates and stores information, and every information flow is linked to an invisible asset. There are three kind of information: environmental information, business information and internal information. ‘Environmental information’, that flows from environment to the business and creates invisible assets related to the environment. In this category there are technology, R&D,marketing research.‘Business information’ flows from the business to the environment and generates invisible asset stored in the environment: such as reputation, brand image and corporate image. ‘Internal information’ is produced and consumed within the business. It refers to corporate culture, skills of managers and of all the people working inside the company. Italian business administration literature gives a very important contribution on the definition of intangible assets. In 1988 Brugger stresses an important aspect on the definition of intangibles, considering the possibility of them being separated from other assets. This means that intangibles can be sold like a building or a license. In the same year Guatri (1989) says that an intangible is an input whose utility is deferred in time,it can be measured and it can be transferred, when extracted from the business it gave birth to. So, Guatri stresses one fundamental feature of in tangible assets, which is their autonomy towards the business that has generated them.These two brief definitions contain the three fundamen tal characteristics of intangible assets that arecurrently prevailing in theoretical an d empirical approaches: their origin from a cost and their capability to create future economic benefits; identifiability and possibility to be measured; capability to be separated from the business that has created them.The first point refers to the fact that intangibles must be created with an investment (for example with a advertising campaign) or a purchase (of a brand or a license), and that this expense can give some economicbenefits in the future. These benefits are directly connected with this expense. These benefits can beincreasing revenues for for-profits and increasing grants for not-for-profits.The second point refers to the capacity of intangiblesto be measured (on the contrary, we can’t have anintangible).The third point refers to the possibility to sell or transf er intangible asset: it is possible, for example, to sella brand or a license.IAS (International Accounting Standard) 38 is the document, used all over the world, that prescribes the accounting treatment for intangible assets not dealt with in other IFRS (International Financial ReportingStandard). The Standard requires an entrepreneurial enti ty to recognize an intangibleasset if certain criteriaare met, it specifies how to measure the carrying amountof intangible assets and re quires certain disclosuresregarding intangible assets.According to IAS 38, intangible assets are identifiable nonmonetary asset without physical substance. They are controlled by the entity as a result of past events (for example, purchase or self-creation) and whosefuture foreseeable economic benefits (inflo ws of cash or other assets) are expected.Moreover, according to IAS 38 the three attributes of intangible asset are: identifiability; control (power to obtain benefits from the asset); future economic benefits (such as revenues or reduced future costs).The most important intangible assets are: incorpora tion and expansion costs; research, development costs; advertising investments; goodwill; computer software; patents; copyrights; motion picture films; customerlists; mortgage servicing rights; licenses; import quot as; franchisee; customer and supplier relationships;marketing rights. Advertising investments have long-term validity, are exceptiona l – in terms of allocated resources and time – and aim to obtain future economic benefits. The brand has been introduced intothe list of intangibles (it’s part of the accounting line of marketingrights) in a more recent time: it has signaling qualities (Berger and Ward 2010; Buehler and Halbheer 2011)and it generates competitive advantages (Keller and Lehmann 2006; Neil and Rego Lopo 2009) like advertising.

Brand reputability can be estimated with Intangible Assets(Advertising investments and brandvalues) and Advertising Expenses. The research gives evidence that Intangible Assets area constraint to resources.The advertising expense is, instead, quite consistent,not less than 30% in the most crowded and the mostprofitable cluster. Signaling propensities are confirmed inItalian Visual Arts (museums) and Event Managers, especially in a crowded arena where substitute entertainment supplies and the strenuous competition for diminishing grants from public supporters, they are both growing. The Dorfman-Steiner condition is confirmed in the correlation between brand reputability and profitability in museums. Brand reputability is much more related to ad vertising expenses than to advertising investments and brands, these ones estimated as intang ible. When Intangibles are an important share of Assets as it is in the ‘Landscape’, profits are absent. The research could be enlarged to the full period 2004-2009 or separated to two periods: 2004-2006, before the financial crisis and 2007-2009, during it. The research could also include performing arts or festivals, that are impressively growing in the Italian Cultural Industry, supplying entertainment substitutes to Visual Arts. Further research might estimate substitution effects if da ta were available for demand elasticities. The investigation, otherwise, reveals itself as a firs t attempt to focus on the positive relationship between brand reputability, revenues and profitability. Policy implications are at least three. First of all, screening of good causes and sustainable projects should impose brand reputability, a signalling mechanism th at can assure matching grants. Cultural firms should receive increasing grants if they increase in their qualities signalling. Secondly, cultural policies should encourage and stimulate intangible investments that can generate collateral revenues, for example, royaltiesfrom the brand exposure. Thirdly, urban policies should consider the social capital that is contained in affirmed cultural brands that could be relevant for city-destination branding. Advertising and branding are attracting increased attention in the literature and the empirical research. Creative industries may be a benchmark in order to test brand awareness and performances.