عنوان انگلیسی
Re-examination of wage, employment, and hours adjustments: what is crucial for differences in the adjustments?
دانلود فوری مقاله + سفارش ترجمه 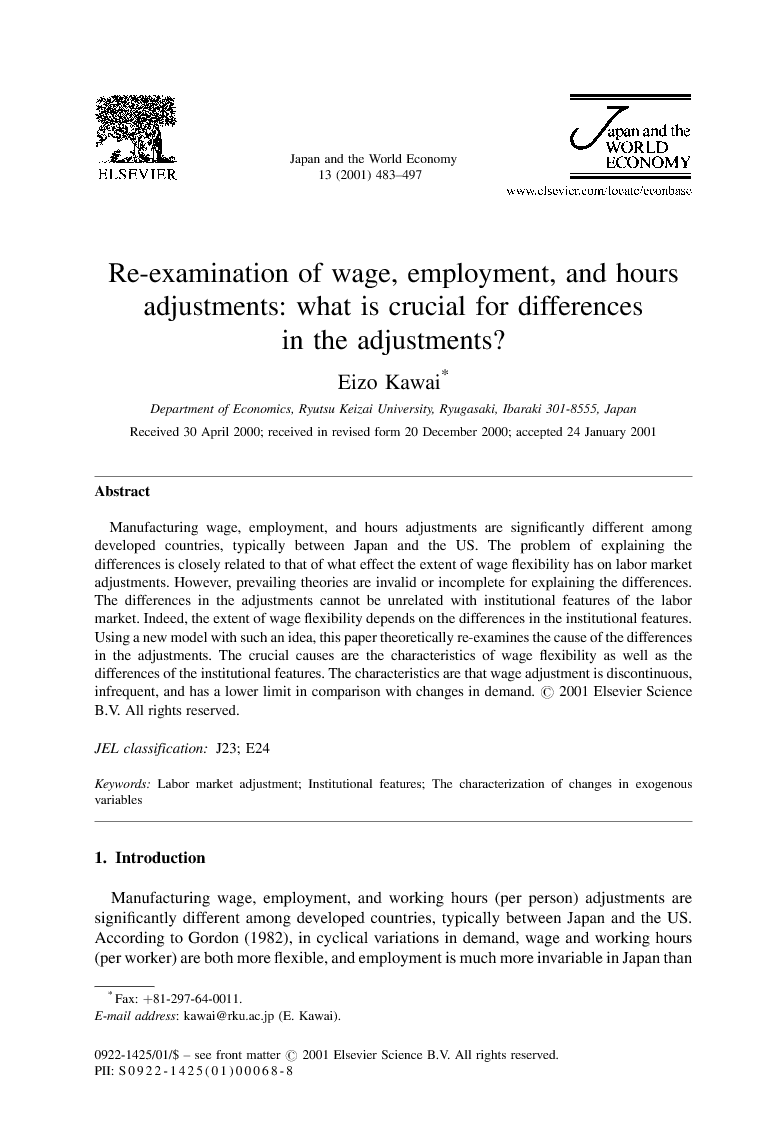 We indicated that the prevailing theories have never given a satisfactory explication for the differences in wage, employment and hours adjustments among developed countries. We provided an appropriate explication of such differences in the adjustments as observed between rigid wage and flexible wage countries, focusing on the process of deep recession. It was supposed that wages of Japan are downwardly flexible with deep recession owing to the institutional distinction, while those of the US with little such distinction are sticky. The supposition about Japan is “risk sharing” or “profit sharing”. The following is the summary of our results under such a supposition. In such a rigid wage economy as the US, it was shown that employment decreases, but hours are inflexible through the process of deep recession. As for such a flexible wage economy as Japan, it was, however, elucidated that wage flexibility in itself does not cause the differences in the adjustments. We showed that in the stage of wage adjustment, discontinuous and infrequent wage adjustment keeps employment unchanged even if demand deteriorates, and the constant employment and the adjusted wage decrease hours with a declining demand. These results imply that although it is often mentioned that flexible hours cause stable employment, the opposite result holds. Furthermore, we showed that if economic conditions deteriorate further beyond the stage of wage adjustment, employment decreases, but hours are inflexible because of the existence of a lower limit in wage adjustment. From the results above, it follows that in the stage of wage adjustment hours are adjusted, and in the following severer stage employment is adjusted. Even if employment adjustment is done in Japan, it does not necessarily mean the collapse of the longtime employment practice. Whether or not employment is adjusted depends on the extent of deterioration of economic conditions even under Japanese employment practices stated earlier. Taking account of the comparison above between a rigid wage and a flexible wage economies, it turned out that in addition to the differences in the institutional characteristics, the key factors causing the differences in the adjustments are the features of wage flexibility, not the flexibility in itself. The features are that in comparison with changes in demand, wage adjustment is discontinuous, infrequent, and has a lower limit. The crucial points of the analysis are the following two: one is that the institutional characteristics are taken into consideration, and that two exogenous variables are assumed to change in a different way; that is, wage adjustment is definitely different from changes in demand in terms of a frequency, continuity, and lower limit, respectively; and the other is that a corner solution is used in order to explicate the stable employment of Japan in the stage of wage adjustment.