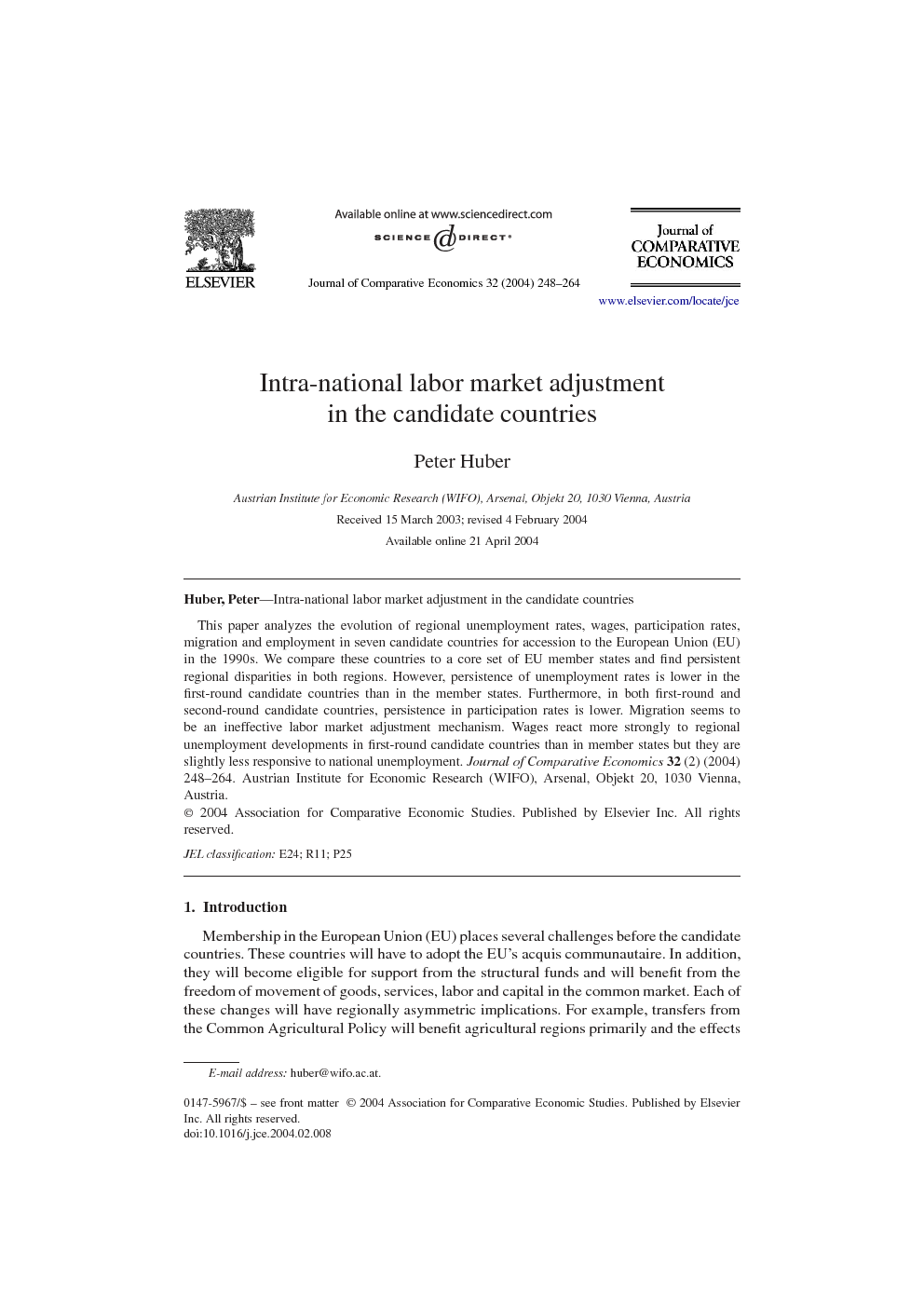 Membership in the European Union (EU) places several challenges before the candidate countries. These countries will have to adopt the EU's acquis communautaire. In addition, they will become eligible for support from the structural funds and will benefit from the freedom of movement of goods, services, labor and capital in the common market. Each of these changes will have regionally asymmetric implications. For example, transfers from the Common Agricultural Policy will benefit agricultural regions primarily and the effects of adopting competition and environmental policy are likely to impact more on regions in which non-competitive and sheltered industries or environmentally hazardous productions are located. Similarly, the freedom of movement of labor and services will affect border regions more significantly due to commuting possibilities and the limited transportability of many services. This paper investigates the adjustment of regional labor markets of candidate countries to asymmetric shocks. Hence, we add to the literature on labor market adjustment in the United States (Blanchard and Katz, 1992) and the European Union Decressin and Fatas, 1995, Fatas, 2000 and Jimeno and Bentolila, 1998 in two ways. First, we provide evidence on labor market adjustment and investigate to what extent candidate countries are already market economies. Second, by analyzing different forms of regional labor market adjustment, we provide an empirical background against which the effects of EU-enlargement on regional labor markets can be discussed in countries that have been characterized by different institutions than those in established market economies. Analyzing labor market adjustments is particularly relevant with respect to the EMU membership of the candidate countries because joining a monetary union results in a country losing its autonomy over exchange rate policy. Hence, labor market mechanisms must be used to adjust to permanent shocks. To the extent that a loss in the real value of income denominated in foreign currency is socially or politically more desirable than increased unemployment, real wage losses denominated in national currency, migration or reductions in participation rates, there are risks of joining the EMU. Furthermore, to the extent that these forms of labor market adjustments differ amongst each other in their social or political desirability, the exact form of labor market adjustment will be relevant. The motivation of our analysis is that any adverse region-specific shock that is not accommodated by regional transfers or borrowing from other regions must be absorbed by wages adjusting to new equilibrium levels, by increased unemployment or by reduced labor supply in the region. The last form of adjustment can be achieved either by emigration from the region or by lower participation of residents. After a short description of the data and the results of previous research in the next section, section three focuses on the short run dynamics of regional labor markets by analyzing the persistence of region-specific shocks and considering the reaction of inter-regional migration to disparities in unemployment rates and wages. Section four considers wage adjustments and section five concludes by drawing some policy conclusions.