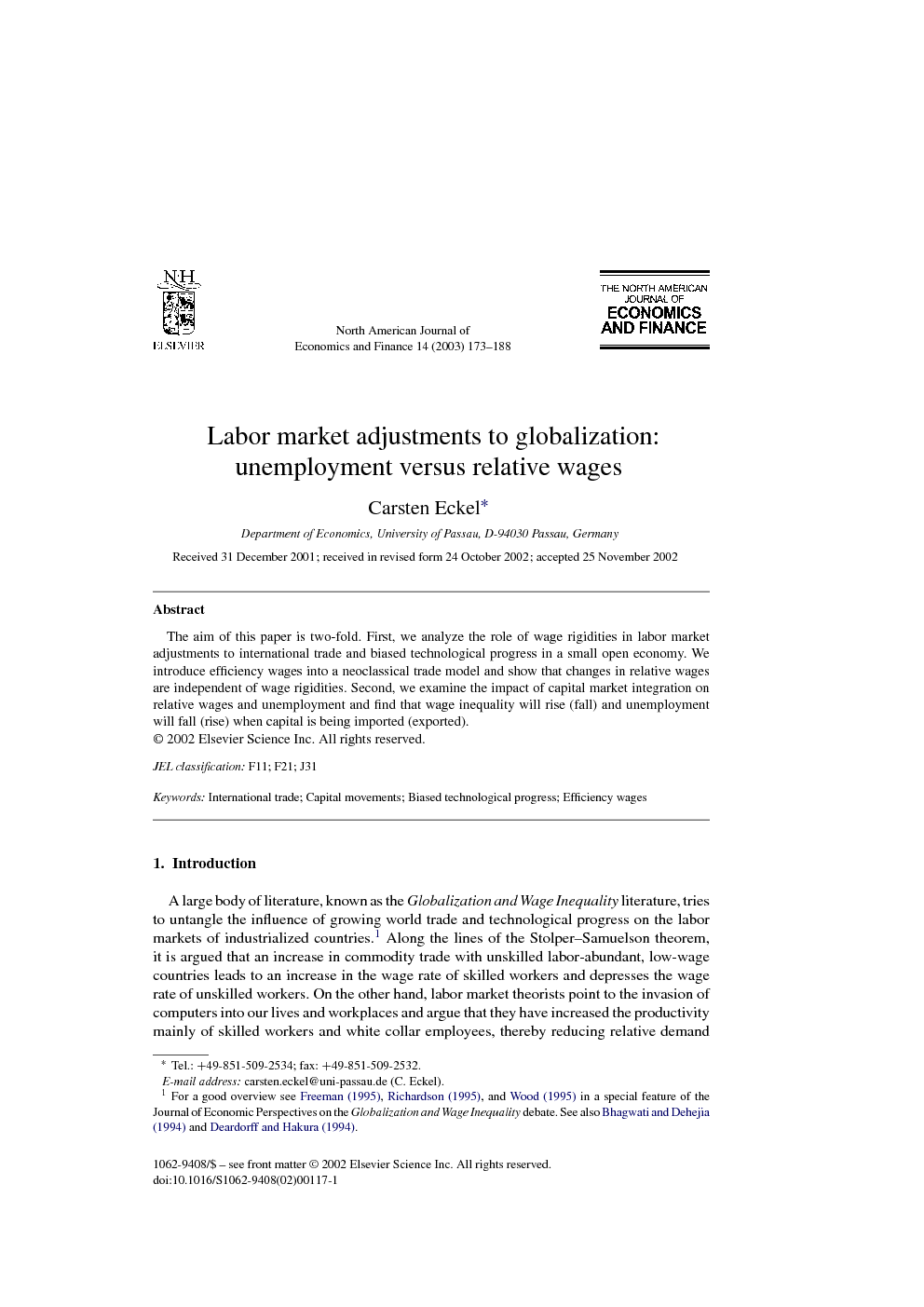 The aim of this paper is two-fold. First, we analyze the role of wage rigidities in labor market adjustments to international trade and biased technological progress in a small open economy. We introduce efficiency wages into a neoclassical trade model and show that changes in relative wages are independent of wage rigidities. Second, we examine the impact of capital market integration on relative wages and unemployment and find that wage inequality will rise (fall) and unemployment will fall (rise) when capital is being imported (exported).

A large body of literature, known as the Globalization and Wage Inequality literature, tries to untangle the influence of growing world trade and technological progress on the labor markets of industrialized countries. 1 Along the lines of the Stolper–Samuelson theorem, it is argued that an increase in commodity trade with unskilled labor-abundant, low-wage countries leads to an increase in the wage rate of skilled workers and depresses the wage rate of unskilled workers. On the other hand, labor market theorists point to the invasion of computers into our lives and workplaces and argue that they have increased the productivity mainly of skilled workers and white collar employees, thereby reducing relative demand for unskilled workers. A lively empirical debate revolves around the question of whether the observed increase in the skill premium in the United States and in the United Kingdom should be attributed mainly to the increase in trade with low-wage countries or to biased technological change. 2 However, the US and UK experiences of a rapidly rising skill premium are relatively unique among industrialized countries (Dewatripont, Sapir, & Sekkat, 1999; Fortin & Lemieux, 1997; Krugman, 1995 and OECD, 1996, p. 61f). This is striking because trade and technology are worldwide shocks, or at least shocks that most industrialized countries are exposed to. If they are responsible for an increase in the skill premium in some industrialized countries, why did the skill premium in other industrialized countries either fail to increase or even decline? Some authors point to labor market institutions as a possible explanation (Fortin & Lemieux, 1997, Freeman, 1995 and Siebert, 1997). They argue that when relative demand for unskilled labor falls, either prices (i.e., wages) or quantities (i.e., employment) have to adjust. Therefore, if wages of unskilled workers are rigid due to labor market institutions, then a fall in demand for unskilled labor does not necessarily lead to a higher skill premium but to an increase in unemployment of unskilled workers. Krugman (1995) and Davis (1998) study the presence of minimum wage constraints in an international trade framework. Although they illustrate that international trade could have been responsible for the increase in unemployment in Europe, their framework does not address the issue of divergence in wage patterns across countries. The present paper tries to contribute in two ways. First, we provide an alternative approach to wage rigidities based on efficiency wage considerations. This approach has several advantages which are laid out in detail in Section 2. In contrast to previous studies, we find that the Stolper–Samuelson pressure remains on relative wages in spite of wage rigidities. Second, we extend the analysis to include not only biased technological change, but also capital movements. Even though real capital mobility is one of the key characteristics of globalization, its impact on relative wages and unemployment has not yet been fully explored. We discuss the reasons for explicitly including capital and capital mobility in Section 3. The analysis of international capital market integration reveals that capital movements have an impact on both relative wages and unemployment, too. The remainder of the paper is organized as follows. Section 4 sets up the model. The equilibrium is illustrated in Section 5. In 6, 7 and 8, we conduct a comparative static analysis to derive the impact of international trade, biased technological progress, and capital market integration on the skill premium and the unemployment rate. Section 9 summarizes these results and concludes the paper.

In the previous sections we have made extensive use of the ceteris paribus clause. The impact of international trade, technological progress, and capital market integration were all analyzed as if they were the only change brought about by globalization. In reality, however, all three changes coincide. So if we are to say something about the impact of globalization as a whole, we have to look at all three changes simultaneously. In this case we have to differentiate between the effects in a capital-exporting country and in a capital-importing country. Table 1 summarizes our results.Table 1 shows that capital-importing countries can expect to see their skill premium rise, whereas the impact on the rate of unemployment is somewhat ambiguous in these countries. Capital-exporting countries, on the other hand, should experience a sharp rise of unemployment, while the impact on relative wages is not as clearly determined. Most interestingly, the total impact of globalization is either largely skill-premium-increasing or largely unemployment-increasing. However, it is not wage rigidities that decide whether relative wages or unemployment rates adjust. We showed that wage rigidities are rather irrelevant in that respect. It is the directions of capital flows that make the difference.