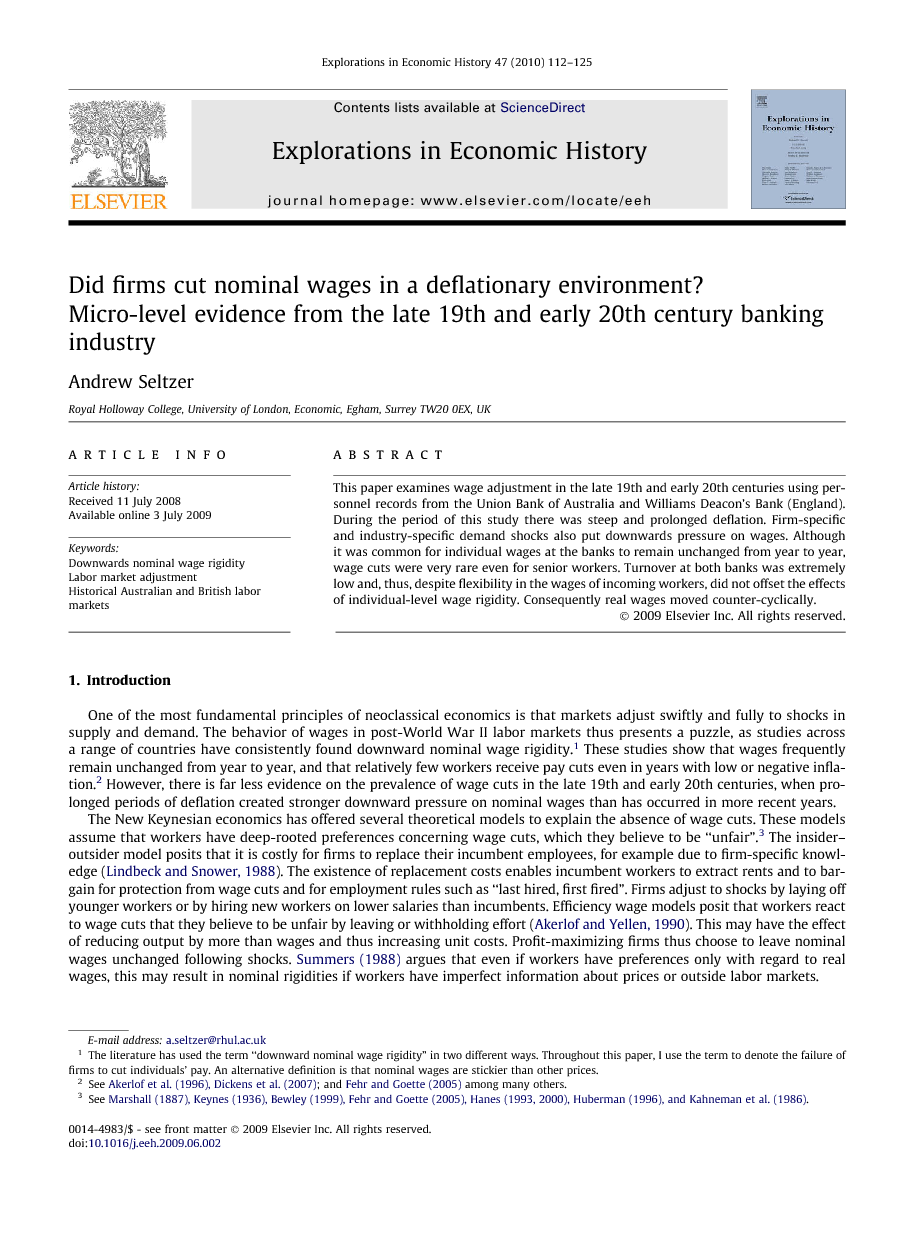 This paper examines wage adjustment in the late 19th and early 20th centuries using personnel records from the Union Bank of Australia and Williams Deacon’s Bank (England). During the period of this study there was steep and prolonged deflation. Firm-specific and industry-specific demand shocks also put downwards pressure on wages. Although it was common for individual wages at the banks to remain unchanged from year to year, wage cuts were very rare even for senior workers. Turnover at both banks was extremely low and, thus, despite flexibility in the wages of incoming workers, did not offset the effects of individual-level wage rigidity. Consequently real wages moved counter-cyclically.

This paper has examined wage adjustment and downward nominal wage rigidity in the late 19th and early 20th century banking industry using personnel data from the Union Bank of Australia and Williams Deacon’s Bank. The data have an important advantage over data used in previous studies of wage rigidity during this period; namely that observations are at an individual level. Both the UBA and WDB faced considerable macroeconomic, industry-specific, firm-specific downward pressure on wages and few institutional impediments to wage cuts. The period of this study was characterized by strong and persistent deflation in both Australia and England. The UBA also faced a serious banking crisis in the early 1890s, which resulted in the temporary or permanent closure of most Australian banks. Williams Deacon’s faced a severe recession in its Lancashire manufacturing base in the 1920s. An increase in the labor supply due to the expansion of female employment beginning during the First World War put further pressure on male wages at the Bank. The main finding of this paper is that, despite strong downward pressure on wages, nominal wage cuts for existing staff were very rare at both banks. Even during years with severe deflation and for groups of workers who were unlikely to be accumulating human capital, nominal increments clustered at zero. Wage cuts were almost completely absent at WDB and rare at the UBA except for an across-the-board cut in 1895. The determinants of unchanged wages were very similar to those of wage cuts, suggesting that leaving wages unchanged was as a substitute for cutting wages. Even though wages of incumbent staff were rigid downward, new workers were often paid less than previous cohorts. However, low turnover rates at both banks meant that wage flexibility for new entrants did not offset wage rigidity for incumbents and overall wages moved counter-cyclically.