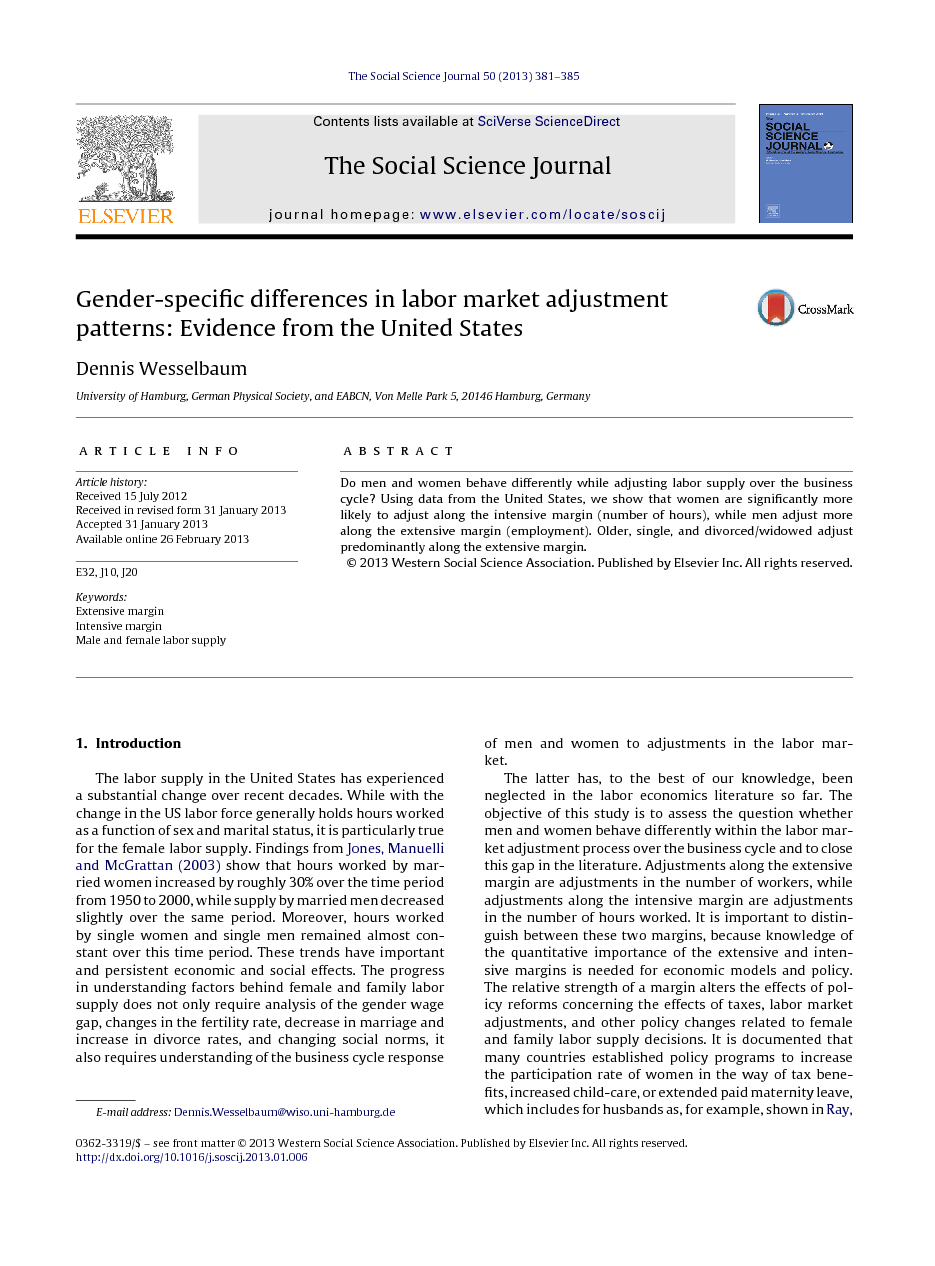 The labor supply in the United States has experienced a substantial change over recent decades. While with the change in the US labor force generally holds hours worked as a function of sex and marital status, it is particularly true for the female labor supply. Findings from Jones, Manuelli and McGrattan (2003) show that hours worked by married women increased by roughly 30% over the time period from 1950 to 2000, while supply by married men decreased slightly over the same period. Moreover, hours worked by single women and single men remained almost constant over this time period. These trends have important and persistent economic and social effects. The progress in understanding factors behind female and family labor supply does not only require analysis of the gender wage gap, changes in the fertility rate, decrease in marriage and increase in divorce rates, and changing social norms, it also requires understanding of the business cycle response of men and women to adjustments in the labor market. The latter has, to the best of our knowledge, been neglected in the labor economics literature so far. The objective of this study is to assess the question whether men and women behave differently within the labor market adjustment process over the business cycle and to close this gap in the literature. Adjustments along the extensive margin are adjustments in the number of workers, while adjustments along the intensive margin are adjustments in the number of hours worked. It is important to distinguish between these two margins, because knowledge of the quantitative importance of the extensive and intensive margins is needed for economic models and policy. The relative strength of a margin alters the effects of policy reforms concerning the effects of taxes, labor market adjustments, and other policy changes related to female and family labor supply decisions. It is documented that many countries established policy programs to increase the participation rate of women in the way of tax benefits, increased child-care, or extended paid maternity leave, which includes for husbands as, for example, shown in Ray, Gornick and Schmitt (2009) or discussed in the “International Review of Leave Policies and Related Research” of the Department of Business (2007)i. Along this line, it is important to separate the extensive–intensive margin for men and women, as income taxes from benefit reforms that may have larger disincentive effects when the intensive margin is more important, which would increase labor supply elasticity. Three patterns are clear. First, our results indicate that men and women in the age group 16–19 have the same ratio of extensive vs. intensive margin. When they grow older, we find that men tend to adjust more often along the extensive margin (0.74), while women adjust more often along the intensive margin (0.66). Second, we find that the extensiv–intensive margin split depends on the marital status of agents. The extensive margin of married men and women is roughly 0.65, while it increases for singles to roughly 0.74. Third, we observe large differences across occupations. For example, individuals employed in the service sector adjust almost equally likely along the intensive and the extensive margin. In contrast, employees in the management sector almost entirely adjust along the extensive margin (0.80). Further, while the importance of the extensive margin across occupations stays rather constant for men, it varies more strongly for women. The study by Blundell, Bozio and Laroque (2011) decomposes the total change of hours worked into individual contributions from men and women across different age groups. This is different from our analysis, since we investigate the role of extensive versus intensive margin for the adjustment within a given age group over the business cycle. Furthermore, a technical difference is that they decompose the change in hours between periods by assuming the change is driven by a structural factor and the intensive and extensive margins. As an alternative, our analysis refrains from econometric or causal assumptions, and in contrast, solely uses the statistical properties of the time series. In an earlier paper, Merkl and Wesselbaum (2011) provide evidence for the relative importance of the two margins for business cycle dynamics using a data set for the United States and Germany. They show that the extensive margin in both countries is the primary margin of adjustment. However, their study uses highly aggregated data, and does not allow for gender differences.