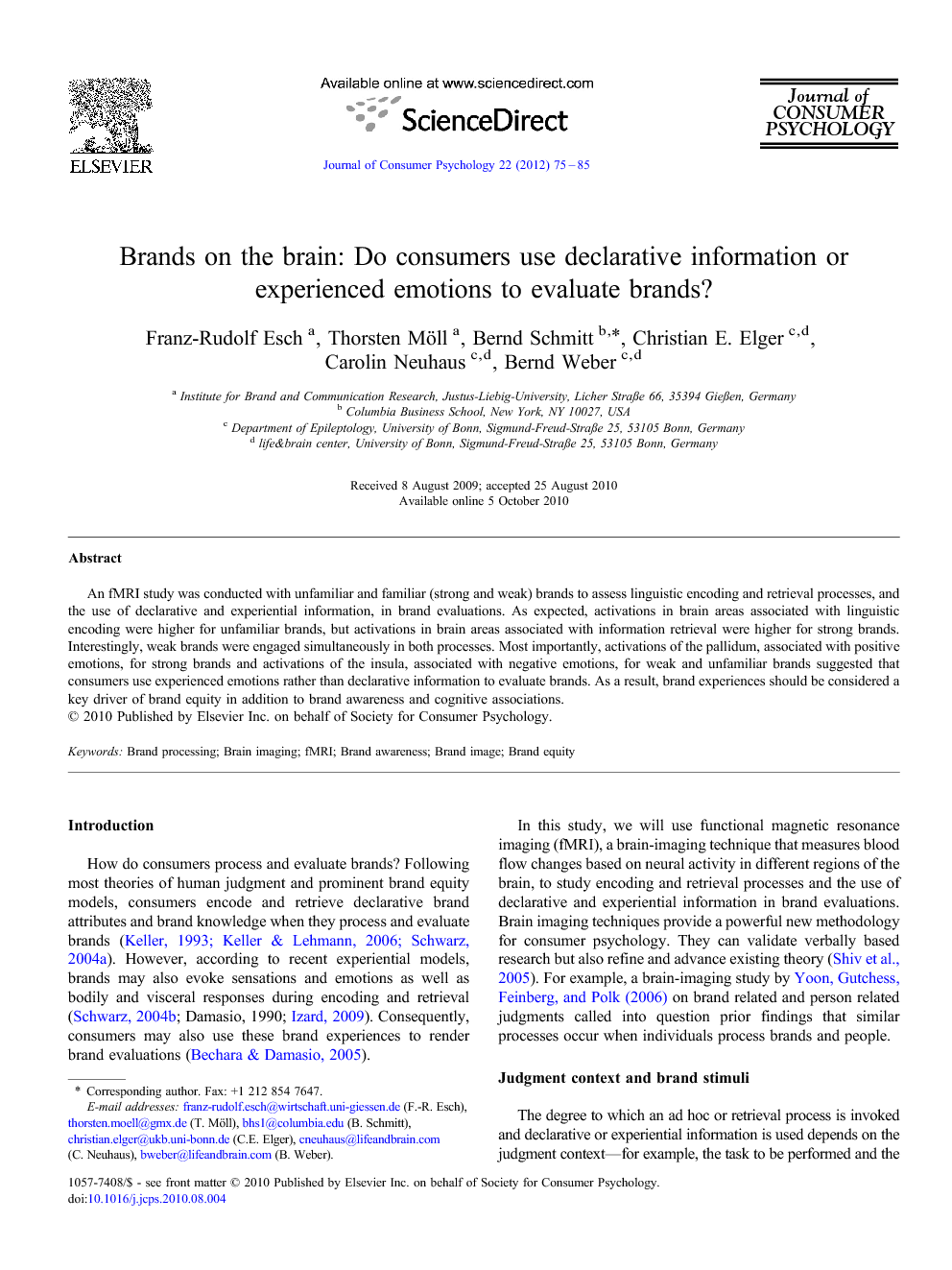 An fMRI study was conducted with unfamiliar and familiar (strong and weak) brands to assess linguistic encoding and retrieval processes, and the use of declarative and experiential information, in brand evaluations. As expected, activations in brain areas associated with linguistic encoding were higher for unfamiliar brands, but activations in brain areas associated with information retrieval were higher for strong brands. Interestingly, weak brands were engaged simultaneously in both processes. Most importantly, activations of the pallidum, associated with positive emotions, for strong brands and activations of the insula, associated with negative emotions, for weak and unfamiliar brands suggested that consumers use experienced emotions rather than declarative information to evaluate brands. As a result, brand experiences should be considered a key driver of brand equity in addition to brand awareness and cognitive associations.

How do consumers process and evaluate brands? Following most theories of human judgment and prominent brand equity models, consumers encode and retrieve declarative brand attributes and brand knowledge when they process and evaluate brands (Keller, 1993, Keller and Lehmann, 2006 and Schwarz, 2004a). However, according to recent experiential models, brands may also evoke sensations and emotions as well as bodily and visceral responses during encoding and retrieval (Schwarz, 2004b; Damasio, 1990; Izard, 2009). Consequently, consumers may also use these brand experiences to render brand evaluations (Bechara & Damasio, 2005). In this study, we will use functional magnetic resonance imaging (fMRI), a brain-imaging technique that measures blood flow changes based on neural activity in different regions of the brain, to study encoding and retrieval processes and the use of declarative and experiential information in brand evaluations. Brain imaging techniques provide a powerful new methodology for consumer psychology. They can validate verbally based research but also refine and advance existing theory (Shiv et al., 2005). For example, a brain-imaging study by Yoon, Gutchess, Feinberg, and Polk (2006) on brand related and person related judgments called into question prior findings that similar processes occur when individuals process brands and people. Judgment context and brand stimuli The degree to which an ad hoc or retrieval process is invoked and declarative or experiential information is used depends on the judgment context—for example, the task to be performed and the nature of the stimuli. The judgment context selected for this study is a typical situation that consumers frequently encounter when they shop and purchase products as part of their everyday lives. The situation is characterized by short exposure, limited information presentation and time constraints to render an evaluation. Specifically, participants will be shown several brands; they will be asked to briefly think about the brands and then evaluate them. The stimuli will be unfamiliar and familiar brands, and, within familiar brands, so-called “strong” and “weak” brands (Hoeffler and Keller, 2003 and Keller, 1993). Both strong and weak brands can easily be recognized; however, strong brands display higher unaided recall and top-of-the-mind recall. Moreover, strong brands possess stronger and more positive brand associations (Hoeffler & Keller, 2003). In the following, to derive hypotheses for our study, we discuss, first, ad hoc and retrieval-based processing and, second, the relative use of declarative and experiential information for unfamiliar, strong and weak brands in the context of this typical and frequently encountered judgment context.