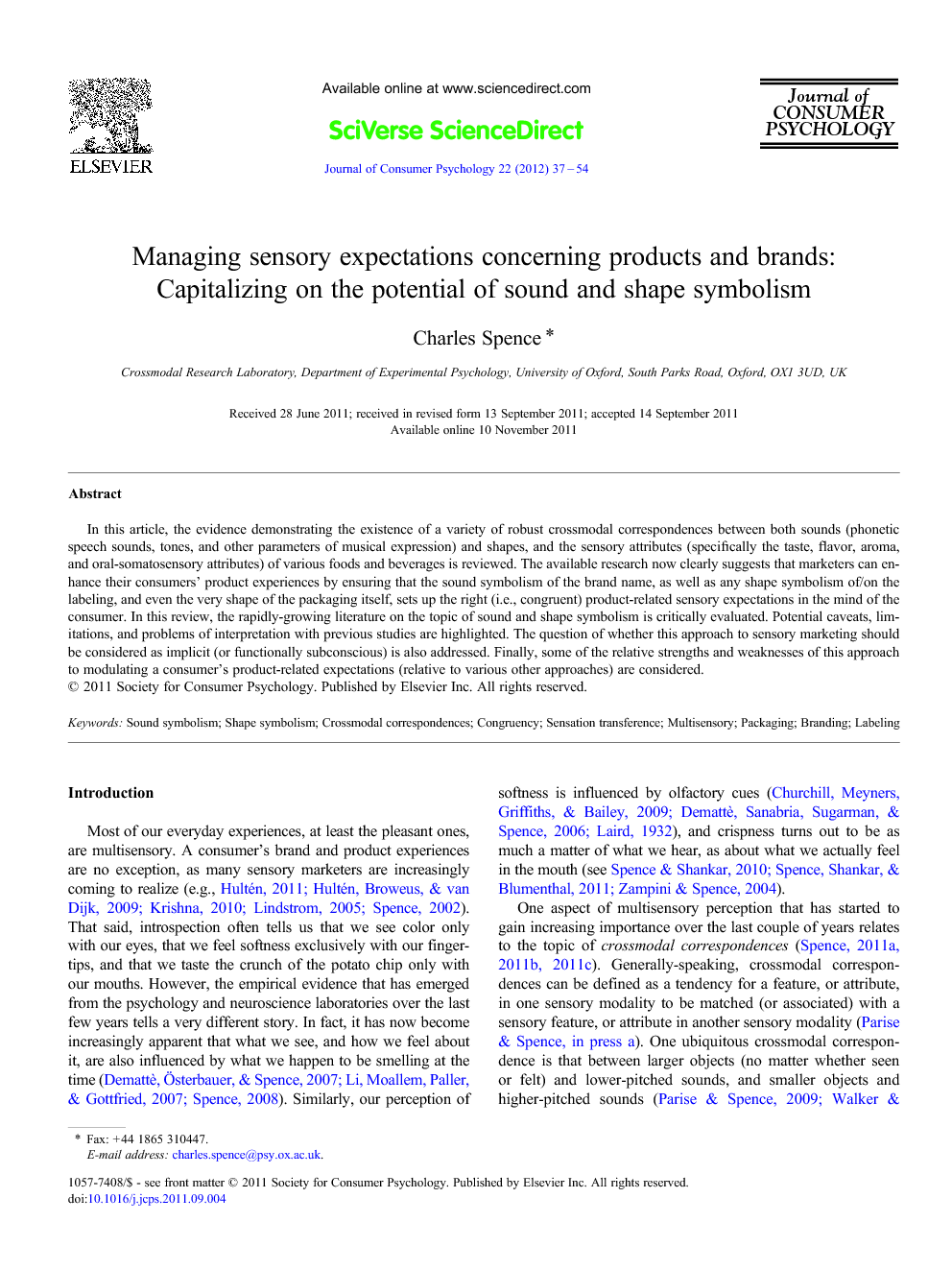 In this article, the evidence demonstrating the existence of a variety of robust crossmodal correspondences between both sounds (phonetic speech sounds, tones, and other parameters of musical expression) and shapes, and the sensory attributes (specifically the taste, flavor, aroma, and oral-somatosensory attributes) of various foods and beverages is reviewed. The available research now clearly suggests that marketers can enhance their consumers' product experiences by ensuring that the sound symbolism of the brand name, as well as any shape symbolism of/on the labeling, and even the very shape of the packaging itself, sets up the right (i.e., congruent) product-related sensory expectations in the mind of the consumer. In this review, the rapidly-growing literature on the topic of sound and shape symbolism is critically evaluated. Potential caveats, limitations, and problems of interpretation with previous studies are highlighted. The question of whether this approach to sensory marketing should be considered as implicit (or functionally subconscious) is also addressed. Finally, some of the relative strengths and weaknesses of this approach to modulating a consumer's product-related expectations (relative to various other approaches) are considered.

Most of our everyday experiences, at least the pleasant ones, are multisensory. A consumer's brand and product experiences are no exception, as many sensory marketers are increasingly coming to realize (e.g., Hultén, 2011, Hultén et al., 2009, Krishna, 2010, Lindstrom, 2005 and Spence, 2002). That said, introspection often tells us that we see color only with our eyes, that we feel softness exclusively with our fingertips, and that we taste the crunch of the potato chip only with our mouths. However, the empirical evidence that has emerged from the psychology and neuroscience laboratories over the last few years tells a very different story. In fact, it has now become increasingly apparent that what we see, and how we feel about it, are also influenced by what we happen to be smelling at the time (Demattè, Österbauer and Spence, 2007, Li et al., 2007 and Spence, 2008). Similarly, our perception of softness is influenced by olfactory cues (Churchill et al., 2009, Demattè, Sanabria, Sugarman and Spence, 2006 and Laird, 1932), and crispness turns out to be as much a matter of what we hear, as about what we actually feel in the mouth (see Spence and Shankar, 2010, Spence et al., 2011 and Zampini and Spence, 2004). One aspect of multisensory perception that has started to gain increasing importance over the last couple of years relates to the topic of crossmodal correspondences ( Spence, 2011a, Spence, 2011b and Spence, 2011c). Generally-speaking, crossmodal correspondences can be defined as a tendency for a feature, or attribute, in one sensory modality to be matched (or associated) with a sensory feature, or attribute in another sensory modality (Parise & Spence, in press a). One ubiquitous crossmodal correspondence is that between larger objects (no matter whether seen or felt) and lower-pitched sounds, and smaller objects and higher-pitched sounds ( Parise and Spence, 2009 and Walker and Smith, 1985). In this case, at least, the correspondence reflects a fundamental law of physics. The two classes of crossmodal correspondence that I wish to look at in this article are commonly-referred to as sound and shape symbolism. Sound symbolism is the name given to the association that people experience between specific sounds (including speech sounds) and particular stimulus attributes (e.g., as when they associate words containing the ‘i’ sound with smallness). Shape symbolism refers to the similar crossmodal mapping that exists between abstract shapes and other sensory attributes (e.g., as between sharp pointy shapes and bitterness or carbonation in foods and beverages). Put simply, when the different sensory attributes of a product, or its packaging, or of the environment in which that product is purchased, used, or experienced match (or correspond) crossmodally, then this can impact positively on the consumer's overall multisensory consumer experience. In this chapter, I want to review the evidence demonstrating that our rapidly growing understanding of the psychological mechanisms underlying crossmodal correspondences, and in particular sound and shape symbolism, can be used to set up the appropriate sensory expectations in the mind of the consumer which, in turn can enhance the consumer's multisensory experience of both products and brands. In order to try and keep this article manageable, I will focus on the use of sound and shape symbolism in the food and beverage sectors. However, it should be noted that the findings outlined here are equally applicable to a number of different classes of product, everything from portable electronic goods to prescription medications, and from fast-moving consumer goods (FMCGs) to major household investments, such as cars (e.g., Abel & Glinert, 2008). Interestingly, many of these crossmodal effects appear to operate on an implicit level (i.e., without the consumer necessarily being aware of what is going on). Hence, it is not uncommon to find that, when asked, consumers deny being influenced by sound and shape symbolism, and yet carefully controlled studies of their behavior, in both the laboratory and in the marketplace, tell a very different story (see also Cheskin, 1972).