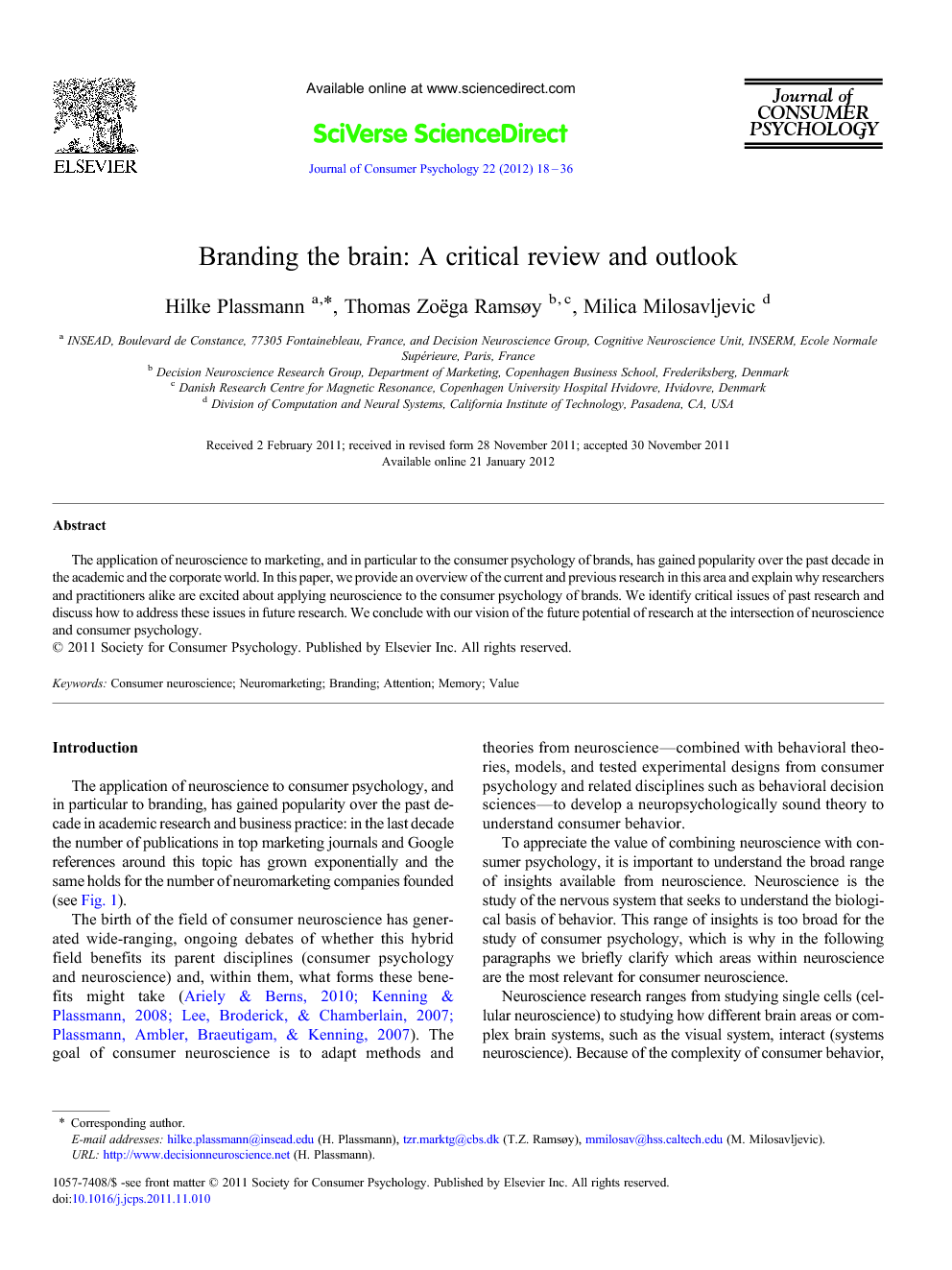 The application of neuroscience to consumer psychology, and in particular to branding, has gained popularity over the past decade in academic research and business practice: in the last decade the number of publications in top marketing journals and Google references around this topic has grown exponentially and the same holds for the number of neuromarketing companies founded (see Fig. 1).The birth of the field of consumer neuroscience has generated wide-ranging, ongoing debates of whether this hybrid field benefits its parent disciplines (consumer psychology and neuroscience) and, within them, what forms these benefits might take (Ariely and Berns, 2010, Kenning and Plassmann, 2008, Lee et al., 2007 and Plassmann, Ambler, Braeutigam and Kenning, 2007). The goal of consumer neuroscience is to adapt methods and theories from neuroscience—combined with behavioral theories, models, and tested experimental designs from consumer psychology and related disciplines such as behavioral decision sciences—to develop a neuropsychologically sound theory to understand consumer behavior. To appreciate the value of combining neuroscience with consumer psychology, it is important to understand the broad range of insights available from neuroscience. Neuroscience is the study of the nervous system that seeks to understand the biological basis of behavior. This range of insights is too broad for the study of consumer psychology, which is why in the following paragraphs we briefly clarify which areas within neuroscience are the most relevant for consumer neuroscience. Neuroscience research ranges from studying single cells (cellular neuroscience) to studying how different brain areas or complex brain systems, such as the visual system, interact (systems neuroscience). Because of the complexity of consumer behavior, insights from systems neuroscience are crucial for consumer neuroscience, whereas those from cellular neuroscience currently are limited. Neuroscientists study species ranging from the primitive (such as sea snails, fruit flies, and leeches) to the complex (such as mammals and primates). Most consumer neuroscience studies investigate mental processes in human subjects, but a few selected studies also use non-human primates or small animals such as monkeys as subject populations.1 Another important distinction is between clinical and non-clinical research in neuroscience. Clinical research, known as neurology, studies how nervous system disorders, trauma, tumors and injuries affect cognition, emotion, and behavior in patients as compared to healthy subject populations. In general, consumer neuroscience studies consumer responses in healthy subject populations.2 A last critical distinction is between consumer neuroscience, which refers to academic research at the intersection of neuroscience and consumer psychology, and neuromarketing, which refers to practitioner and commercial interest in neurophysiological tools, such as eye tracking, skin conductance, electroencephalography (EEG), and functional magnetic resonance imaging (fMRI), to conduct company-specific market research. Neuromarketing has received considerable attention in the corporate world, and the growth of neuromarketing companies over the last decade has been impressive (see Fig. 1). The goal of this paper is to shed light on what neuroscience can bring to the table to advance our understanding of the consumer psychology of brands. In particular, we aim to provide an overview of the current state of research in this area, identify critical issues of past research and discuss how to address these issues in future research. We conclude with our vision of the future potential of research at the intersection of neuroscience and consumer psychology.