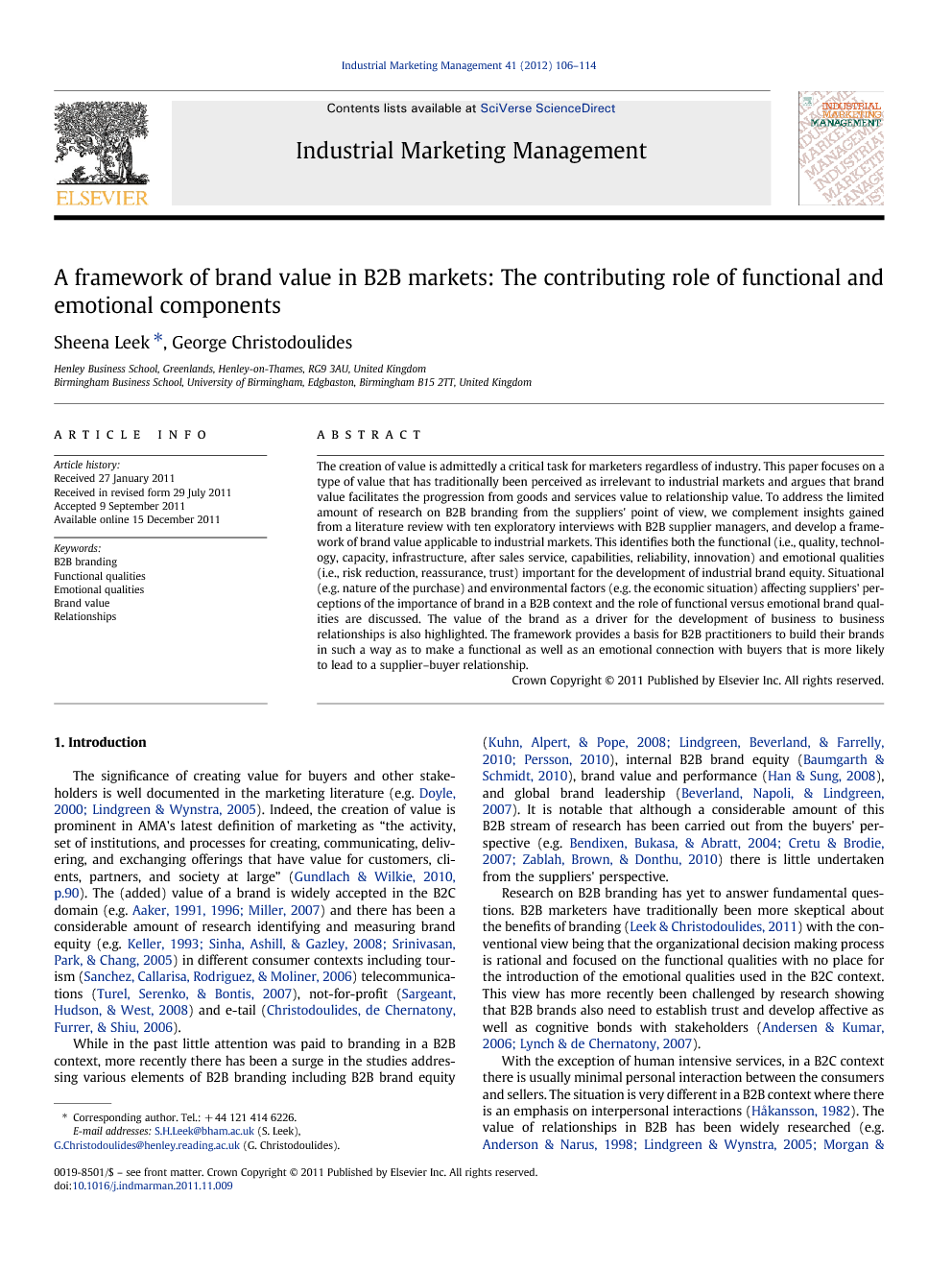 The creation of value is admittedly a critical task for marketers regardless of industry. This paper focuses on a type of value that has traditionally been perceived as irrelevant to industrial markets and argues that brand value facilitates the progression from goods and services value to relationship value. To address the limited amount of research on B2B branding from the suppliers' point of view, we complement insights gained from a literature review with ten exploratory interviews with B2B supplier managers, and develop a framework of brand value applicable to industrial markets. This identifies both the functional (i.e., quality, technology, capacity, infrastructure, after sales service, capabilities, reliability, innovation) and emotional qualities (i.e., risk reduction, reassurance, trust) important for the development of industrial brand equity. Situational (e.g. nature of the purchase) and environmental factors (e.g. the economic situation) affecting suppliers' perceptions of the importance of brand in a B2B context and the role of functional versus emotional brand qualities are discussed. The value of the brand as a driver for the development of business to business relationships is also highlighted. The framework provides a basis for B2B practitioners to build their brands in such a way as to make a functional as well as an emotional connection with buyers that is more likely to lead to a supplier–buyer relationship.

The significance of creating value for buyers and other stakeholders is well documented in the marketing literature (e.g. Doyle, 2000 and Lindgreen and Wynstra, 2005). Indeed, the creation of value is prominent in AMA's latest definition of marketing as “the activity, set of institutions, and processes for creating, communicating, delivering, and exchanging offerings that have value for customers, clients, partners, and society at large” (Gundlach & Wilkie, 2010, p.90). The (added) value of a brand is widely accepted in the B2C domain (e.g. Aaker, 1991, Aaker, 1996 and Miller, 2007) and there has been a considerable amount of research identifying and measuring brand equity (e.g. Keller, 1993, Sinha et al., 2008 and Srinivasan et al., 2005) in different consumer contexts including tourism (Sanchez, Callarisa, Rodriguez, & Moliner, 2006) telecommunications (Turel, Serenko, & Bontis, 2007), not-for-profit (Sargeant, Hudson, & West, 2008) and e-tail (Christodoulides, de Chernatony, Furrer, & Shiu, 2006). While in the past little attention was paid to branding in a B2B context, more recently there has been a surge in the studies addressing various elements of B2B branding including B2B brand equity (Kuhn et al., 2008, Lindgreen et al., 2010 and Persson, 2010), internal B2B brand equity (Baumgarth & Schmidt, 2010), brand value and performance (Han & Sung, 2008), and global brand leadership (Beverland, Napoli, & Lindgreen, 2007). It is notable that although a considerable amount of this B2B stream of research has been carried out from the buyers' perspective (e.g. Bendixen et al., 2004, Cretu and Brodie, 2007 and Zablah et al., 2010) there is little undertaken from the suppliers' perspective. Research on B2B branding has yet to answer fundamental questions. B2B marketers have traditionally been more skeptical about the benefits of branding (Leek & Christodoulides, 2011) with the conventional view being that the organizational decision making process is rational and focused on the functional qualities with no place for the introduction of the emotional qualities used in the B2C context. This view has more recently been challenged by research showing that B2B brands also need to establish trust and develop affective as well as cognitive bonds with stakeholders (Andersen and Kumar, 2006 and Lynch and de Chernatony, 2007). With the exception of human intensive services, in a B2C context there is usually minimal personal interaction between the consumers and sellers. The situation is very different in a B2B context where there is an emphasis on interpersonal interactions (Håkansson, 1982). The value of relationships in B2B has been widely researched (e.g. Anderson and Narus, 1998, Lindgreen and Wynstra, 2005, Morgan and Hunt, 1994, Ravald and Grönroos, 1996, Ulaga, 2001, Ulaga and Eggert, 2006 and Walter et al., 2001), however it remains unclear whether part of a B2B brand's value is driving the development of relationships. While several criteria used during the process of organizational buying have been examined (e.g. Bendixen et al., 2004 and Mudambi et al., 1997) there is little research investigating how situational factors such as risk (Bennett, Hartel, & McColl-Kennedy, 2005) influence the perceived value of B2B brands. Environmental factors outside of the organization may also affect the perceived value of a B2B brand. For example, a significant number of industrial organizations faced with the prospect of commoditization and increased lack of differentiation in their respective markets have deployed brand development strategies in an attempt to create a competitive advantage. This has led B2B brands such as IBM, Cisco, Oracle and Intel to be currently amongst the most valuable brands globally (Interbrand, 2010). While other types of value including the value of goods and services and the value of buyer–seller relationships have been investigated extensively in the B2B marketing literature (for a review, see Lindgreen & Wynstra, 2005), brand value remains largely unexplored (Leek & Christodoulides, 2011). We argue, in this paper, that brand value in a B2B context facilitates the progression from goods and services value, which is predominantly associated with functional benefits to relationship value, which is closely associated with emotional needs. Brand value encompasses the value of goods and services and also some added values (functional and emotional) resulting from the brand name. The paper opens by reviewing the literature on brand equity, a concept developed to tap the added value endowed by the brand to the product (Farquhar, 1989). We review relevant models and discuss the role of functional and emotional qualities and the importance of relationships in the creation of industrial brand equity. We then explain the methodology followed by the findings of the interviews with the B2B managers on the supplier side culminating in the presentation of a framework of brand value applicable to B2B markets.