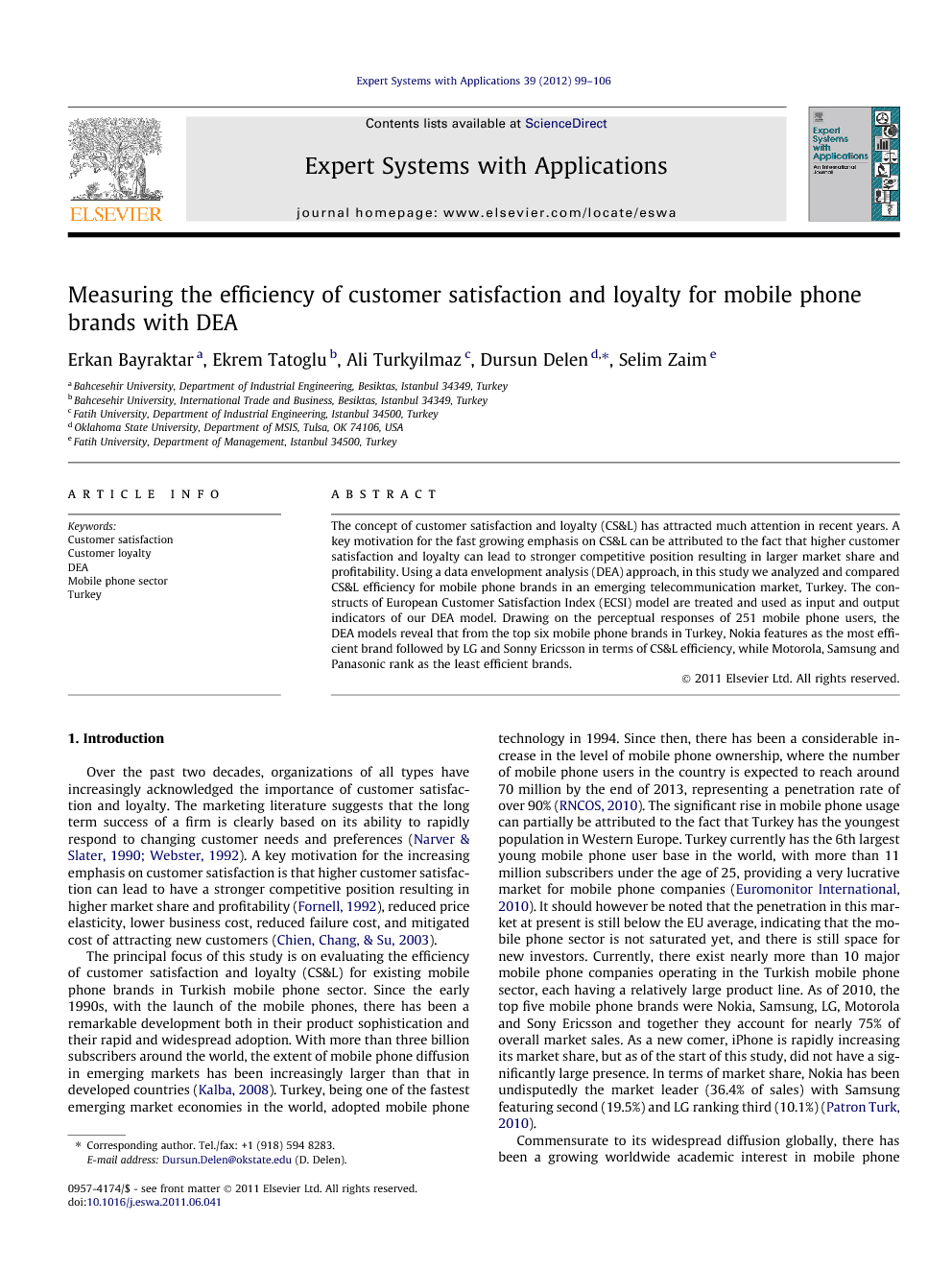 The concept of customer satisfaction and loyalty (CS&L) has attracted much attention in recent years. A key motivation for the fast growing emphasis on CS&L can be attributed to the fact that higher customer satisfaction and loyalty can lead to stronger competitive position resulting in larger market share and profitability. Using a data envelopment analysis (DEA) approach, in this study we analyzed and compared CS&L efficiency for mobile phone brands in an emerging telecommunication market, Turkey. The constructs of European Customer Satisfaction Index (ECSI) model are treated and used as input and output indicators of our DEA model. Drawing on the perceptual responses of 251 mobile phone users, the DEA models reveal that from the top six mobile phone brands in Turkey, Nokia features as the most efficient brand followed by LG and Sonny Ericsson in terms of CS&L efficiency, while Motorola, Samsung and Panasonic rank as the least efficient brands.

Over the past two decades, organizations of all types have increasingly acknowledged the importance of customer satisfaction and loyalty. The marketing literature suggests that the long term success of a firm is clearly based on its ability to rapidly respond to changing customer needs and preferences (Narver and Slater, 1990 and Webster, 1992). A key motivation for the increasing emphasis on customer satisfaction is that higher customer satisfaction can lead to have a stronger competitive position resulting in higher market share and profitability (Fornell, 1992), reduced price elasticity, lower business cost, reduced failure cost, and mitigated cost of attracting new customers (Chien, Chang, & Su, 2003). The principal focus of this study is on evaluating the efficiency of customer satisfaction and loyalty (CS&L) for existing mobile phone brands in Turkish mobile phone sector. Since the early 1990s, with the launch of the mobile phones, there has been a remarkable development both in their product sophistication and their rapid and widespread adoption. With more than three billion subscribers around the world, the extent of mobile phone diffusion in emerging markets has been increasingly larger than that in developed countries (Kalba, 2008). Turkey, being one of the fastest emerging market economies in the world, adopted mobile phone technology in 1994. Since then, there has been a considerable increase in the level of mobile phone ownership, where the number of mobile phone users in the country is expected to reach around 70 million by the end of 2013, representing a penetration rate of over 90% (RNCOS, 2010). The significant rise in mobile phone usage can partially be attributed to the fact that Turkey has the youngest population in Western Europe. Turkey currently has the 6th largest young mobile phone user base in the world, with more than 11 million subscribers under the age of 25, providing a very lucrative market for mobile phone companies (Euromonitor International, 2010). It should however be noted that the penetration in this market at present is still below the EU average, indicating that the mobile phone sector is not saturated yet, and there is still space for new investors. Currently, there exist nearly more than 10 major mobile phone companies operating in the Turkish mobile phone sector, each having a relatively large product line. As of 2010, the top five mobile phone brands were Nokia, Samsung, LG, Motorola and Sony Ericsson and together they account for nearly 75% of overall market sales. As a new comer, iPhone is rapidly increasing its market share, but as of the start of this study, did not have a significantly large presence. In terms of market share, Nokia has been undisputedly the market leader (36.4% of sales) with Samsung featuring second (19.5%) and LG ranking third (10.1%) (Patron Turk, 2010). Commensurate to its widespread diffusion globally, there has been a growing worldwide academic interest in mobile phone usage which focuses mainly on examining its contribution to social life, user preferences and its ergonomic features (Bagchi, Kirs, & Lopez, 2008). A number of empirical studies were also conducted within the context of Turkish mobile phone sector. The topics of these studies ranged from examining motivation of use (Dedeoglu, 2004 and Ozcan and Kocak, 2003) to mobile phone selection (Isiklar & Buyukozkan, 2007), from customer satisfaction (Turkyilmaz & Ozkan, 2007) to brand loyalty (Simsek & Noyan, 2009). The methodology used in study to evaluate the relative CS&L efficiency of mobile phone brands is based on data envelopment analysis (DEA). The traditional DEA technique has long been utilized as an invaluable tool in the field of operations research and management science to solve problems in wide range of industries (Hu et al., 2009, Lee, 2009 and Lin et al., 2009) as well as in not-for-profit organizations (Mahajan, 1991, Wu et al., 2009 and Zhang et al., 2009); but its diffusion into the field of marketing and related disciplines has been relatively slow. For instance, in the marketing field, DEA has recently been employed as a powerful tool for data analysis in measuring efficiency in retailing sector (Charnes et al., 1985, Donthu and Yoo, 1998, Keh, 2000, Keh and Chu, 2003 and Thomas et al., 1998), evaluating website marketing efficiency (Shuai & Wu, 2011), benchmarking marketing productivity (Donthu et al., 2005 and Kamakura et al., 1988), and measuring relative market efficiency (Murthi, Srinivasan, & Kalyanaram, 1996) or service quality (Athanassopoulos, 1997 and Soteriou and Staurinides, 1997). The assessment of CS&L has always been a major research item on the agenda of researchers in the marketing and related fields, because the issue of how efficiently a firm manages its marketing processes and their relationship with their customers is central to its ability to gain competitive edge vis-à-vis its rivals. The DEA approach adopted in this study illustrates how differences in CS&L efficiency between various mobile phone brands can be ascertained empirically, and thus helps management determine proper policies and courses of action. The rest of the paper is organized as follows. Section 2 reviews the recent literature on customer satisfaction and customer loyalty studies. Section 3 provides an in-depth description of our research methodology. Section 4 presents the results of our analysis. The last section (Section 5) summarizes our findings, describes managerial implications of the study and provides the concluding remarks.

Commensurate with growing interest in the applications of efficiency analyses in management science, this study has attempted to develop a DEA based methodology for examining CS&L efficiency using the example of major cellular phone brands operating in Turkish mobile phone sector. Drawing on ECSI model, EFA was first applied to reduce the number of variables, and to determine the exogenous and endogenous latent variables that were used as input and output variables in the CS&L efficiency model. Second, output-oriented BCC DEA was implemented to identify the CS&L efficiency of mobile phone brands. The evidence obtained from the analysis of relative CS&L efficiency revealed that out of the top six mobile phone brands Nokia featured as the most efficient brand followed by LG and Sony Ericsson, while Motorola, Samsung and Panasonic ranked as the least efficient brands. This study has important implications for practice. Without a doubt, the competition for greater market share is intensifying within the mobile phone industry in Turkey. A more focused approach to building up a novel competitive edge is vital for success (or mere survival) in this volatile market. One of the best and obvious ways of achieving this is through a scientifically sound marketing and customer retention strategy. It is more costly to attract new customers than to retain the existing ones. Therefore, the key focus in managing customer satisfaction is to identify the core satisfaction determinants from the user’s perspective and then to assess the company’s performance in addressing each of these determinants. One of the challenging tasks that existing brands face is how to improve their image and satisfy the expectations of their customers. They must strive to improve features and enhance product and service quality so that they can improve customers’ experiences with mobile phones and by doing so improves overall customer loyalty. Brand managers should also focus on enhancing their company’s image and develop advertising and promotional messages that could encourage customers to think about their experiences with the actual product. This needs to be accomplished simultaneously as reducing costs, if the existing manufacturers desire to maximize customer satisfaction and gain high market penetration through brand loyalty. While this study provides a useful methodology built on DEA modeling to assist managers in making accurate and timely decisions based on measuring CS&L efficiency, its limitations should also be acknowledged. First, the input and output measures of the study were determined using subjective measures largely drawn from the ECSI model. Alternatively, in a potential future study, some additional subjective and objective inputs and outputs measures may be added to enrich the comprehensiveness of the model in investigating the CS&L efficiency of the companies. Another potential future study may employ a two stages approach, which combines DEA and multiple regression analysis, to obtain further insights into some control variables such as age, region, and price level. Finally, given the relative paucity of marketing research in emerging countries, there is an obvious need for comparison of similar studies in other developed countries. Also, it would be interesting to conduct similar studies for comparison purposes at other emerging markets and countries that have commonalities with Turkey, such as India, Brazil, China and Russia.