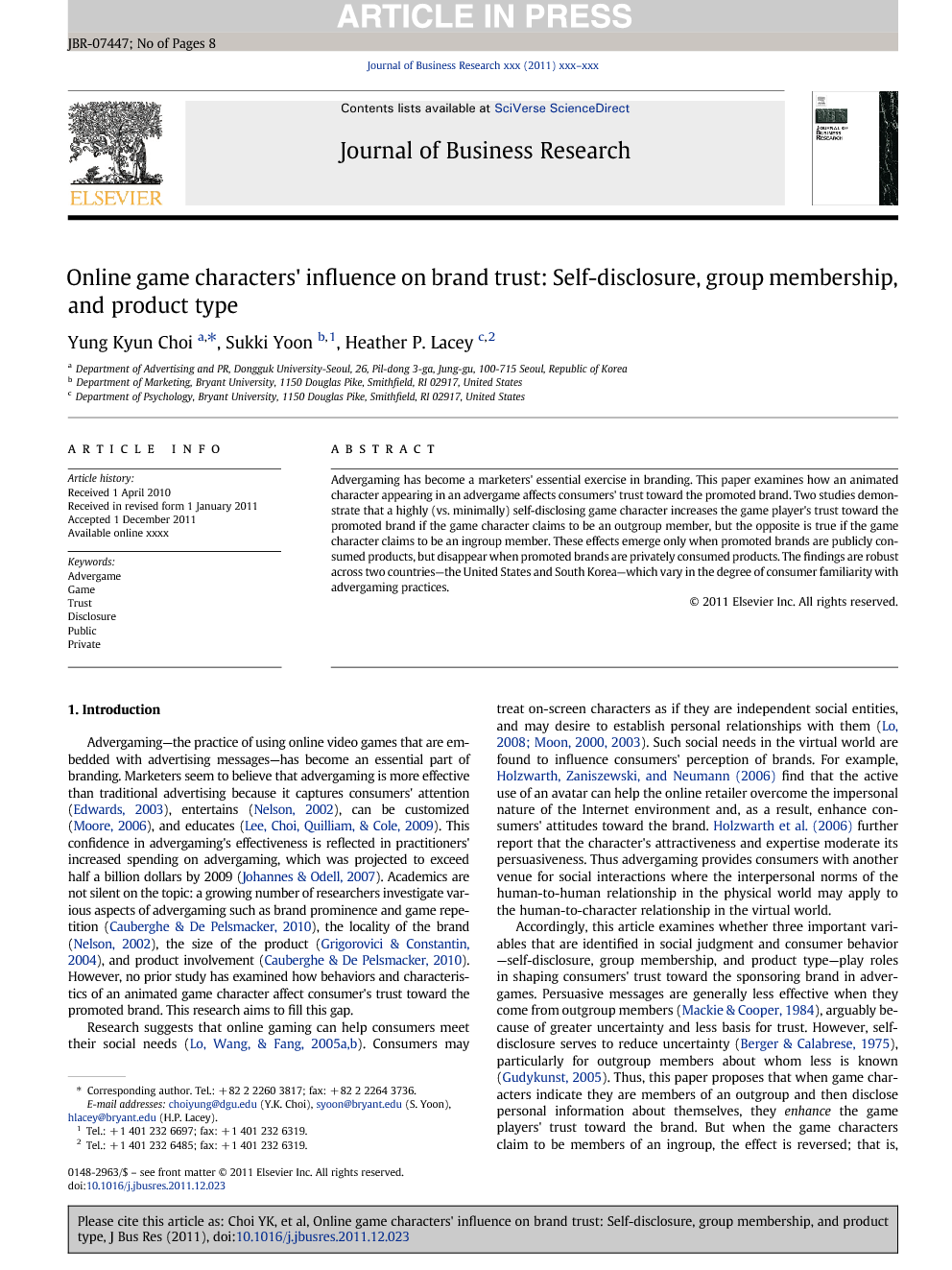 Advergaming has become a marketers' essential exercise in branding. This paper examines how an animated character appearing in an advergame affects consumers' trust toward the promoted brand. Two studies demonstrate that a highly (vs. minimally) self-disclosing game character increases the game player's trust toward the promoted brand if the game character claims to be an outgroup member, but the opposite is true if the game character claims to be an ingroup member. These effects emerge only when promoted brands are publicly consumed products, but disappear when promoted brands are privately consumed products. The findings are robust across two countries—the United States and South Korea—which vary in the degree of consumer familiarity with advergaming practices.

Advergaming—the practice of using online video games that are embedded with advertising messages—has become an essential part of branding. Marketers seem to believe that advergaming is more effective than traditional advertising because it captures consumers' attention (Edwards, 2003), entertains (Nelson, 2002), can be customized (Moore, 2006), and educates (Lee, Choi, Quilliam, & Cole, 2009). This confidence in advergaming's effectiveness is reflected in practitioners' increased spending on advergaming, which was projected to exceed half a billion dollars by 2009 (Johannes & Odell, 2007). Academics are not silent on the topic: a growing number of researchers investigate various aspects of advergaming such as brand prominence and game repetition (Cauberghe & De Pelsmacker, 2010), the locality of the brand (Nelson, 2002), the size of the product (Grigorovici & Constantin, 2004), and product involvement (Cauberghe & De Pelsmacker, 2010). However, no prior study has examined how behaviors and characteristics of an animated game character affect consumer's trust toward the promoted brand. This research aims to fill this gap. Research suggests that online gaming can help consumers meet their social needs (Lo et al., 2005a and Lo et al., 2005b). Consumers may treat on-screen characters as if they are independent social entities, and may desire to establish personal relationships with them (Lo, 2008, Moon, 2000 and Moon, 2003). Such social needs in the virtual world are found to influence consumers' perception of brands. For example, Holzwarth, Zaniszewski, and Neumann (2006) find that the active use of an avatar can help the online retailer overcome the impersonal nature of the Internet environment and, as a result, enhance consumers' attitudes toward the brand. Holzwarth et al. (2006) further report that the character's attractiveness and expertise moderate its persuasiveness. Thus advergaming provides consumers with another venue for social interactions where the interpersonal norms of the human-to-human relationship in the physical world may apply to the human-to-character relationship in the virtual world. Accordingly, this article examines whether three important variables that are identified in social judgment and consumer behavior—self-disclosure, group membership, and product type—play roles in shaping consumers' trust toward the sponsoring brand in advergames. Persuasive messages are generally less effective when they come from outgroup members (Mackie & Cooper, 1984), arguably because of greater uncertainty and less basis for trust. However, self-disclosure serves to reduce uncertainty (Berger & Calabrese, 1975), particularly for outgroup members about whom less is known (Gudykunst, 2005). Thus, this paper proposes that when game characters indicate they are members of an outgroup and then disclose personal information about themselves, they enhance the game players' trust toward the brand. But when the game characters claim to be members of an ingroup, the effect is reversed; that is, their self-disclosure weakens the players' trust toward the brand. Furthermore, because social influence affects public behaviors more than private behaviors (e.g., Asch, 1956) this research identifies the product category as a second moderator, and proposes that the above-specified interactions occur if the endorsed product is publicly consumed, but such interactions are absent if the endorsed product is privately consumed. Study 1 first tests this idea with a U.S. population. Study 2 then adds another product and generalizes the findings using a population from South Korea, where people are more accustomed to the practice of advergaming. The literature review that follows begins by looking at the key variables of the current research: online trust, self-disclosure, group membership, and product category.

This research investigates the effects of an animated advergame character on consumers' trust toward the promoted brand. Two studies demonstrate that a highly (vs. minimally) self-disclosing game character increases the game player's trust toward the promoted brand when the game character claims to be an outgroup member, but a highly self-disclosing game character decreases the player's trust when the character claims to be an ingroup member. These effects emerge when promoted brands are publicly consumed products, but disappear when promoted brands are privately consumed products. The effects are generalizable across two different markets—the United States and South Korea—regardless of the varying degrees of prior exposure of each population to the practice of advergaming. This work makes important theoretical contributions. Broadly, this study adds to the person-perception literature by demonstrating that individuals follow similar processes when they perceive both real people in the physical world and nonhuman characters in online environments, and these perception processes have similar psychological consequences. Although the existing literature has focused on the effect of self-disclosure on the target person or group (e.g., Ensari & Miller, 2002), this research provides a key contribution by extending the previous research; the current work shifts the focus from the target person to the object (i.e., brand) associated with the target person. The current findings suggest that a human-like (but not human-exact) game character can change consumers' perception of the brand displayed in an advergame. Although the present research generalizes the self-disclosure effect to a cross-cultural setting, evidence shows that culture sometimes moderates game character effects. For example, Choi et al. (2010) demonstrate that congruence between the game character's presence and the product type (character presence for a publicly consumed product and character absence for a privately consumed product) can improve advertising effects and gaming performances. Yet, they report, this congruence effect depends on culture; the congruence effect emerges in brand evaluation among Americans but not among Koreans, whereas the congruence effect emerges in game performance among Koreans but not among Americans. Their findings suggest that culture may trigger or inhibit game character effects in certain situations. Interestingly, the current results show that the self-disclosure of a game character has a comparable effect across cultures. The post-hoc analysis supports this speculation. The examination of a 2 (U.S. vs. Korea) × 2 (High vs. Low Self-Disclosure) × 2 (Ingroup vs. Outgroup Member) × 2 (Digital Camera vs. Tissue) fully factorial ANOVA reveals no significant four-way interaction (F(1, 145) = .38, p = n.s.). Apparently consumers' needs for belonging and needs for privacy are culturally universal. Future research may seek to identify the culturally specific circumstances that activate these needs. Managerial implications of the present work are clear. The stimuli used in the current research closely resemble real-world applications of advergames (e.g., see Fig. 7 for a Pepsi advergame with the brand logo in the background). The present research reproduces the real-world advergame environment in a controlled lab setting with minimal confounding noise. The stimuli used in this work differ from real-world versions only in that this research uses fictitious brands, a non-existing character, and randomizes manipulations of self-disclosure and group membership. Nevertheless, the current approach has merit in its close-to-reality simulation with a high-quality advergame. This experimentally controlled yet highly realistic investigation gives the proposed conceptualization an ecologically robust test. The present work focuses mainly on the virtual character interacting with consumers, but some new mobile technologies allow consumers to place themselves into the virtual world (i.e., augmented reality), so future research might explore how consumers view themselves in the virtual world.The current findings have straightforward implications for online marketers. When using an animated, avatar-like computer-generated character, managers can improve the image of the sponsoring brand by customizing the character's self-disclosure levels. Having the target audience's demographic data available, particularly when the advertised product is a publicly visible product (e.g., digital camera, golf club, fashion item, or automobile), marketing managers should strive to make the game character less disruptive if most of the Web visitors are homogenous locals. If the customers are from diverse backgrounds, marketers should design the character to be less reserved and should pay extra attention to enhancing the character's friendliness. Future research may study additional product categories such as the necessity–luxury dimension (Bearden & Etzel, 1982) for the product's power to change the dynamics of the relationship between self-disclosure and group membership. Global managers may benefit from standardized advergaming, as culturally collectivistic and individualistic consumers seem to respond similarly to overall patterns of self-disclosure. However, an interesting additional finding is a strong main effect for culture: when two populations are analyzed together, the brand trust is generally higher among Americans than Koreans regardless of the product types, self-disclosure levels, or group membership (t(159) = − 6.44; p < . 01). This main effect of nationality might reflect Korean consumers' skepticism toward advergaming, perhaps because they are widely exposed to advergaming practices (Moon, 2008). Future research may address this question. For policy makers, the findings add insights into understanding how the general public perceives commercial messages that marketers embed into games. Because children are less able to distinguish commercial messages from noncommercial messages, they may be more susceptible than adults are to advergames (Moore & Rideout, 2007). Although further investigation may reveal deeper understandings about possible harmful effects, policy makers should consider whether the immersive nature of online advergaming exploits children.