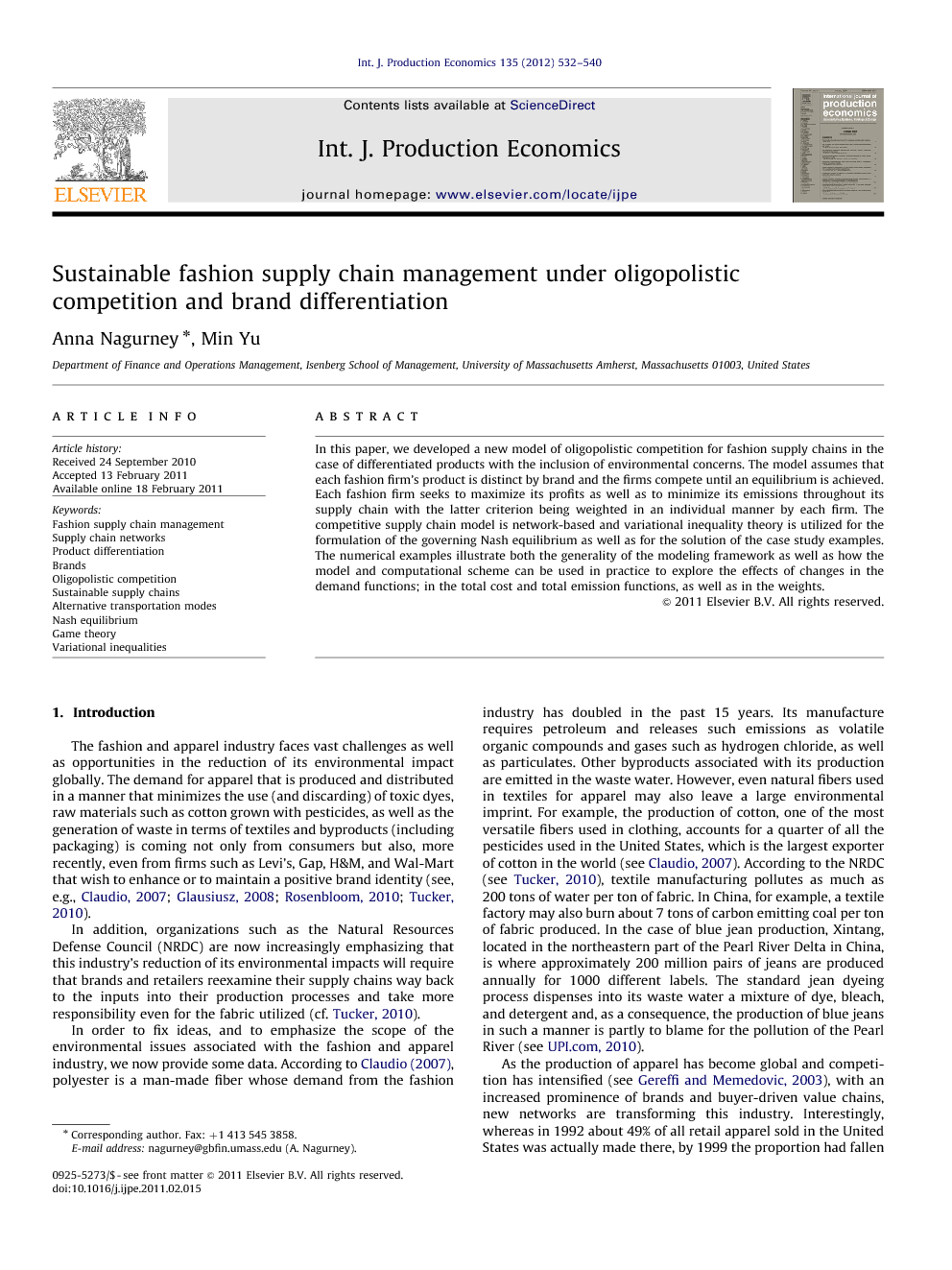 In this paper, we developed a new model of oligopolistic competition for fashion supply chains in the case of differentiated products with the inclusion of environmental concerns. The model assumes that each fashion firm's product is distinct by brand and the firms compete until an equilibrium is achieved. Each fashion firm seeks to maximize its profits as well as to minimize its emissions throughout its supply chain with the latter criterion being weighted in an individual manner by each firm. The competitive supply chain model is network-based and variational inequality theory is utilized for the formulation of the governing Nash equilibrium as well as for the solution of the case study examples. The numerical examples illustrate both the generality of the modeling framework as well as how the model and computational scheme can be used in practice to explore the effects of changes in the demand functions; in the total cost and total emission functions, as well as in the weights.

In this paper, we focused on the fashion and apparel industry, which presents unique challenges and opportunities in terms of environmental sustainability. We developed a competitive supply chain network model, using variational inequality theory, that captures oligopolistic competition with fashion product brand differentiation. The variational inequality model assumes that each firm seeks to maximize its profits and to minimize the emissions that it generates throughout its supply chain as it engages in its activities of manufacturing, storage, and distribution, with a weight associated with the latter criterion. The model allows for alternative modes of transportation from manufacturing sites to distribution centers and from distribution centers to the demand markets, since different modes of transportation are known to emit different amounts of emissions. The variational inequality-based competitive supply chain network model advances the state-of-the-art of supply chain modeling in several ways: (1) it captures competition through brand differentiation, which is an important feature of the fashion industry; (2) it allows for each firm to individually weight its concern for the environment in its decision-making, and (3) alternatives such as multiple modes of transportation can be investigated. In order to demonstrate the generality of the model and the proposed computational scheme, we presented a case study, in which, through a series of numerical examples, we demonstrated the effects of changes on the demand price functions; the total cost and total emission functions, as well as the weights associated with the environmental criterion on the equilibrium product demands, the product prices, profits, and utilities. We noted that the environmental weights could also be interpreted as taxes and, thus, in exploring different values an authority such as the government could assess a priori the effects on the firms' emissions and profits. The case study also demonstrated that consumers can have a major impact, through their environmental consciousness, on the level of profits of firms in their favoring of firms that adopt environmental pollution-abatement technologies for their supply chain activities. The numerical examples in the case studies were selected for their transparency and for reproducibility purposes. Future research may take several directions, including: the empirical application of our framework to a large-scale problem; the inclusion of multiple products produced by each firm, with the retainment of brand differentiation, and the incorporation of multiple pollutants. We hope that the ideas and results in this paper can be used to enhance sustainable fashion supply chain management in both theory and practice.