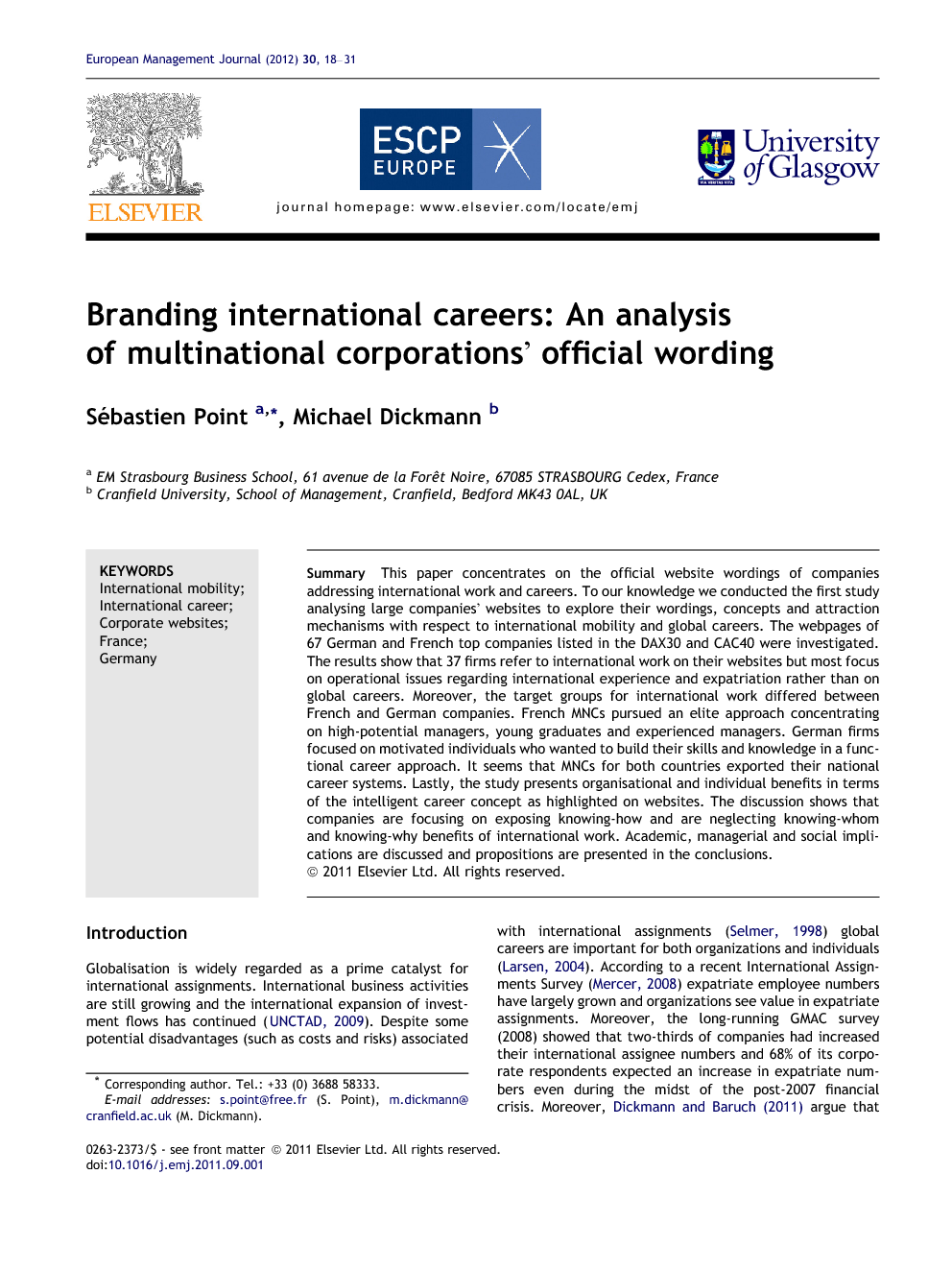 This paper concentrates on the official website wordings of companies addressing international work and careers. To our knowledge we conducted the first study analysing large companies’ websites to explore their wordings, concepts and attraction mechanisms with respect to international mobility and global careers. The webpages of 67 German and French top companies listed in the DAX30 and CAC40 were investigated. The results show that 37 firms refer to international work on their websites but most focus on operational issues regarding international experience and expatriation rather than on global careers. Moreover, the target groups for international work differed between French and German companies. French MNCs pursued an elite approach concentrating on high-potential managers, young graduates and experienced managers. German firms focused on motivated individuals who wanted to build their skills and knowledge in a functional career approach. It seems that MNCs for both countries exported their national career systems. Lastly, the study presents organisational and individual benefits in terms of the intelligent career concept as highlighted on websites. The discussion shows that companies are focusing on exposing knowing-how and are neglecting knowing-whom and knowing-why benefits of international work. Academic, managerial and social implications are discussed and propositions are presented in the conclusions.

Globalisation is widely regarded as a prime catalyst for international assignments. International business activities are still growing and the international expansion of investment flows has continued (UNCTAD, 2009). Despite some potential disadvantages (such as costs and risks) associated with international assignments (Selmer, 1998) global careers are important for both organizations and individuals (Larsen, 2004). According to a recent International Assignments Survey (Mercer, 2008) expatriate employee numbers have largely grown and organizations see value in expatriate assignments. Moreover, the long-running GMAC survey (2008) showed that two-thirds of companies had increased their international assignee numbers and 68% of its corporate respondents expected an increase in expatriate numbers even during the midst of the post-2007 financial crisis. Moreover, Dickmann and Baruch (2011) argue that the number of companies expanding internationally and using expatriates is increasing – the phenomenon of international mobility is likely to remain important for some while yet. However, little is known about how major multinational corporations brand their own aims and the individual benefits that they see arising from international work. Employer branding is about all the efforts in building a desirable place to work for both prospective and current employees (Backhaus & Tikoo, 2004). Schuler and Tarique (2007) note the importance of employer branding and of becoming an employer of global choice for MNCs in ensuring a supply of appropriate talent (Scullion, Collings, & Gunnigle, 2007). We suggest that international career branding is a crucial issue from a global talent management perspective (Tarique & Schuler, 2010). Much recent research has concentrated on the individual approaches to global careers with the exploration of identity changes and network effects having received attention (Khapova, Arthur, & Wilderom, 2007). While there are also emerging studies that look at the individual and the organizational context (Dickmann & Doherty, 2010), they tend to utilise survey evidence, internal company documents or interview data geared to their internal staff. Little, however, is systematically known about how large MNCs have officially reacted to these developments vis-à-vis their external audience. Nowadays extensively used for recruiting talents (Parry & Tyson, 2008), organizational websites also constitute a tool for corporate branding and public relations (Winter, Saunders, & Hart, 2003). In this sense, corporate websites represent an under-estimated source for the development of interesting research. To our knowledge we conducted the first study analysing large companies’ websites to explore their wordings, concepts and attraction mechanisms with respect to international mobility and global careers. Exploring the international career messages on the websites of major MNCs will add to our insights about career as a social and business phenomenon in the globalised economy. It will also emphasize the kind of official “international mobility” discourse employed by MNCs, i.e. understanding how companies promote international mobility issues on-line. The literature review below refines the concept of global careers, distinguishing between global management, international work and careers. It also explores the corporate branding literature. After presenting the methodology, we explore the official concept of international work as exposed on MNCs’ websites. We also investigate the wording companies use to justify and attract candidates to international mobility and careers. We then discuss individual and organizational implications of our survey.