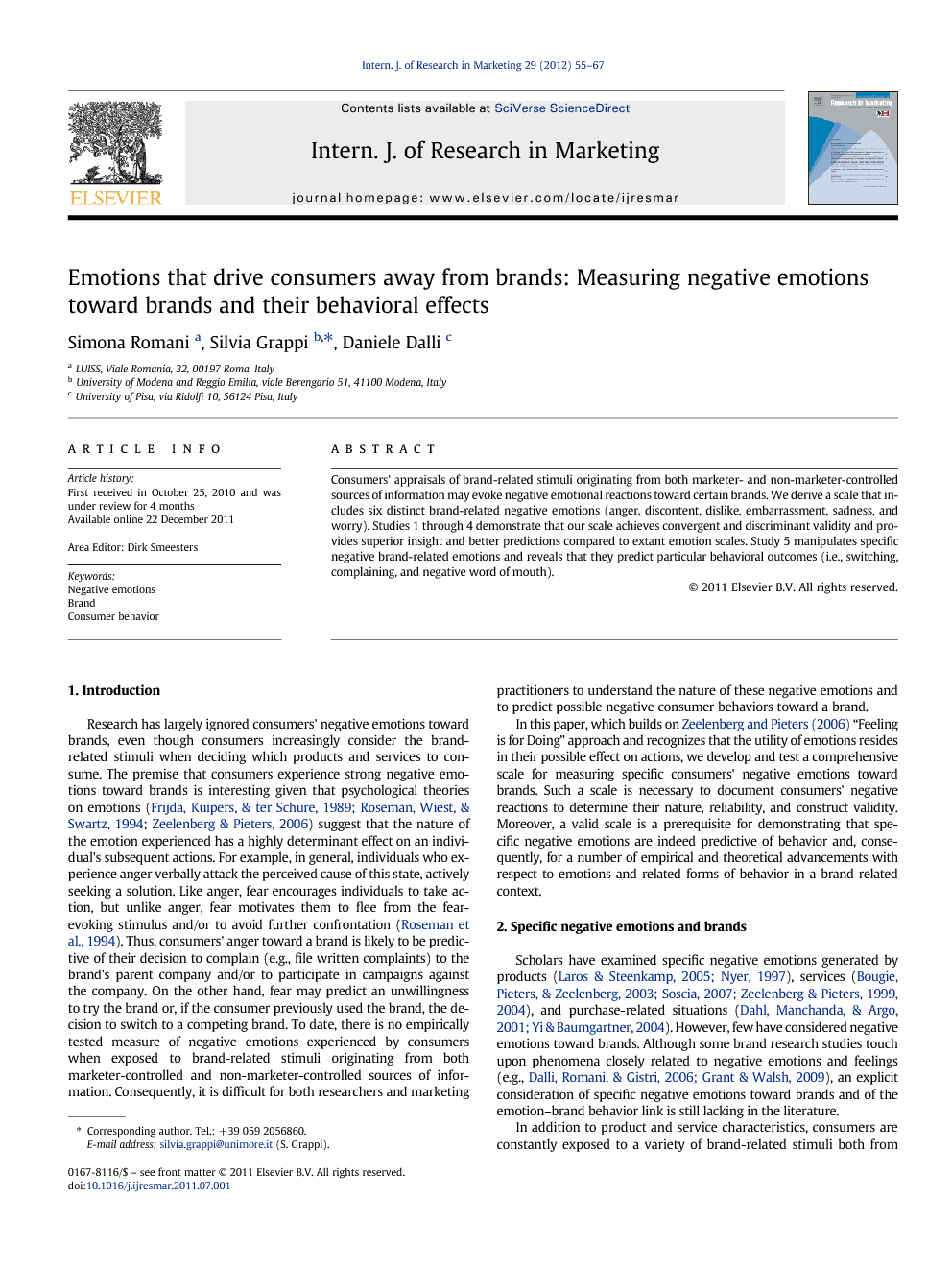 Research has largely ignored consumers' negative emotions toward brands, even though consumers increasingly consider the brand-related stimuli when deciding which products and services to consume. The premise that consumers experience strong negative emotions toward brands is interesting given that psychological theories on emotions (Frijda et al., 1989 and Roseman et al., 1994; Zeelenberg & Pieters, 2006) suggest that the nature of the emotion experienced has a highly determinant effect on an individual's subsequent actions. For example, in general, individuals who experience anger verbally attack the perceived cause of this state, actively seeking a solution. Like anger, fear encourages individuals to take action, but unlike anger, fear motivates them to flee from the fear-evoking stimulus and/or to avoid further confrontation (Roseman et al., 1994). Thus, consumers' anger toward a brand is likely to be predictive of their decision to complain (e.g., file written complaints) to the brand's parent company and/or to participate in campaigns against the company. On the other hand, fear may predict an unwillingness to try the brand or, if the consumer previously used the brand, the decision to switch to a competing brand. To date, there is no empirically tested measure of negative emotions experienced by consumers when exposed to brand-related stimuli originating from both marketer-controlled and non-marketer-controlled sources of information. Consequently, it is difficult for both researchers and marketing practitioners to understand the nature of these negative emotions and to predict possible negative consumer behaviors toward a brand. In this paper, which builds on Zeelenberg and Pieters (2006) “Feeling is for Doing” approach and recognizes that the utility of emotions resides in their possible effect on actions, we develop and test a comprehensive scale for measuring specific consumers' negative emotions toward brands. Such a scale is necessary to document consumers' negative reactions to determine their nature, reliability, and construct validity. Moreover, a valid scale is a prerequisite for demonstrating that specific negative emotions are indeed predictive of behavior and, consequently, for a number of empirical and theoretical advancements with respect to emotions and related forms of behavior in a brand-related context.