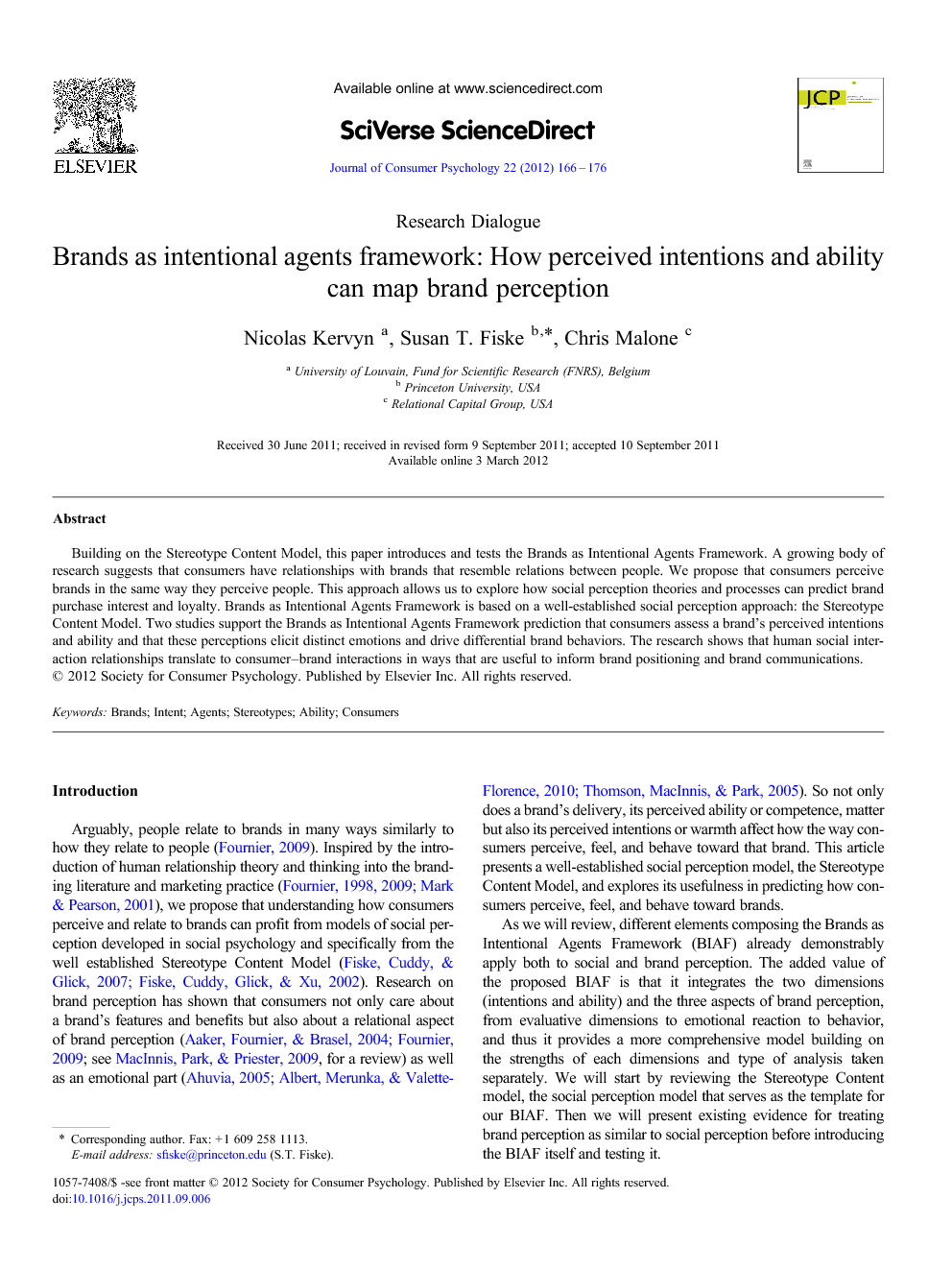 Building on the Stereotype Content Model, this paper introduces and tests the Brands as Intentional Agents Framework. A growing body of research suggests that consumers have relationships with brands that resemble relations between people. We propose that consumers perceive brands in the same way they perceive people. This approach allows us to explore how social perception theories and processes can predict brand purchase interest and loyalty. Brands as Intentional Agents Framework is based on a well-established social perception approach: the Stereotype Content Model. Two studies support the Brands as Intentional Agents Framework prediction that consumers assess a brand's perceived intentions and ability and that these perceptions elicit distinct emotions and drive differential brand behaviors. The research shows that human social interaction relationships translate to consumer–brand interactions in ways that are useful to inform brand positioning and brand communications.

Arguably, people relate to brands in many ways similarly to how they relate to people (Fournier, 2009). Inspired by the introduction of human relationship theory and thinking into the branding literature and marketing practice (Fournier, 1998, Fournier, 2009 and Mark and Pearson, 2001), we propose that understanding how consumers perceive and relate to brands can profit from models of social perception developed in social psychology and specifically from the well established Stereotype Content Model (Fiske et al., 2007 and Fiske et al., 2002). Research on brand perception has shown that consumers not only care about a brand's features and benefits but also about a relational aspect of brand perception (Aaker et al., 2004 and Fournier, 2009; see MacInnis, Park, & Priester, 2009, for a review) as well as an emotional part (Ahuvia, 2005, Albert et al., 2010 and Thomson et al., 2005). So not only does a brand's delivery, its perceived ability or competence, matter but also its perceived intentions or warmth affect how the way consumers perceive, feel, and behave toward that brand. This article presents a well-established social perception model, the Stereotype Content Model, and explores its usefulness in predicting how consumers perceive, feel, and behave toward brands. As we will review, different elements composing the Brands as Intentional Agents Framework (BIAF) already demonstrably apply both to social and brand perception. The added value of the proposed BIAF is that it integrates the two dimensions (intentions and ability) and the three aspects of brand perception, from evaluative dimensions to emotional reaction to behavior, and thus it provides a more comprehensive model building on the strengths of each dimensions and type of analysis taken separately. We will start by reviewing the Stereotype Content model, the social perception model that serves as the template for our BIAF. Then we will present existing evidence for treating brand perception as similar to social perception before introducing the BIAF itself and testing it.

Both studies support our Brands as Intentional Agents Framework (BIAF), with its central claim that brands are seen as intentional agents and thus that their perceived intentions and ability are important dimensions underlying brand perception. This notion that people are able to attribute phenomenal mental states such as positive or negative intentions to non-social objects has already been made in the field of philosophy (Arico, 2010) although it is not universally accepted (Knobe & Prinz, 2008). In total, our findings have significant implications for brand marketers and researchers. First, our testing designs and instruments for evaluating brands produced results that are remarkably similar to those of the Stereotype Content Model, which has been widely validated in the study of human social perception. As expected, each group of brands was perceived by consumers to have a distinct intentions-and-ability profile that tended to elicit predictable patterns of emotions and behavior. While consumer emotions of pity and envy toward brands were found to be far less predictable than expected, the balance of our perception, emotion, and behavior hypotheses were supported by our data. This is especially significant in that it suggests that consumers do perceive, feel, and behave toward brands in ways that closely mirror those toward other people and social groups. In addition, it suggests that other models of human social perception might also prove valuable in understanding and influencing consumer behavior. Further research on the social perception of brands may help explain frequently shifting loyalty among established brands and the rapid adoption of new ones. Our findings regarding the influence and impact of brands' perceived intentions and ability on purchase intent and brand loyalty are also striking. Traditionally, when studying brand equity, marketers look at a brand's intrinsic features and benefits that are considered to be the primary drivers of consumer behavior. Our data suggest however that a brand's perceived relational intentions are also strong predictors of purchase intent and brand loyalty behavior over and above a brand's perceived ability. Consumers' natural sensitivity to the intentions of others would therefore seem to be playing a much larger role in brand behavior than previously understood. In light of the increasing skepticism and distrust many consumers now hold toward large brands and companies, our findings suggest that efforts to maximize shareholder value may now be perceived by consumers as negative intentions and that large brands are often not acting in the public's best interests. An important message of the BIAF is thus to suggest adding perceived brand intentions to more traditional features and benefits when measuring brand equity. Apparently, other business thought-leaders may be reaching a similar conclusion, though by a different path. For instance, we interpret Pepsico's “Performance with Purpose” strategy and Porter and Kramer's (2011) recent Harvard Business Review paper on “Creating Shared Value” as good examples of leaders in the business community arguing for the need to better balance their emphasis on ability with demonstrably honorable intentions. Another example of brand managers having intuitively followed lessons that would arise from the BIAF comes from brands that purposefully create a different brand in order to occupy a different part of the BIAF two-dimensional space. A good example of this kind of differentiation strategy is Lexus. At the end of the eighties Toyota decided to produce luxury vehicles. The brand had, and still has, a strong image as producing affordable and dependable cars, so it is thus typically seen as a warm–competent brand. But in order to reach the high-end clients they wanted to convey the image of a luxury brand that, as we have shown, is expected to portray a high ability, low intentions (toward the general public) image. Therefore they created Lexus, a brand with a different name and different brand image so that Toyota as a group could convey simultaneously two very different brand images. Or to say it in BIAF terms so that the group could be present both in the well-intentioned and able and the ill-intentioned and able quadrant. Another possible useful outcome of the BIAF is to use it as a tool to construct comprehensive and readily understandable maps of brands perception in a specific market/category. Just like the Stereotype Content Model was successfully used to build social perceptions maps in various countries (Cuddy et al., 2009 and Durante et al., under review) using the relevant groups in each country, the BIAF could be used to place on the two dimensions the brands that have been identified as relevant brands in a specific market/category. Having this brand perception map would be a meaningful first step for a brand manager to understand how his/her brand is positioned relative to competitors, on what dimensions improvements are most needed and what kind of emotions the brand is likely to elicit from consumers. Wrapping up, we consider that the main message of our theoretical and experimental work on the Brands as Intentional Agents Framework is that consumers perceive, feel, and behave toward brands in ways that are similar to their interactions with other people and social groups. The important implication for brand researchers, marketers, and managers is that, as with human social interactions, the intrinsic warmth and intention perceptions by consumers are playing a highly significant role in consumer behavior toward brands, but these are likely not as well understood or managed as is needed to build and maintain lasting brand purchase and loyalty.