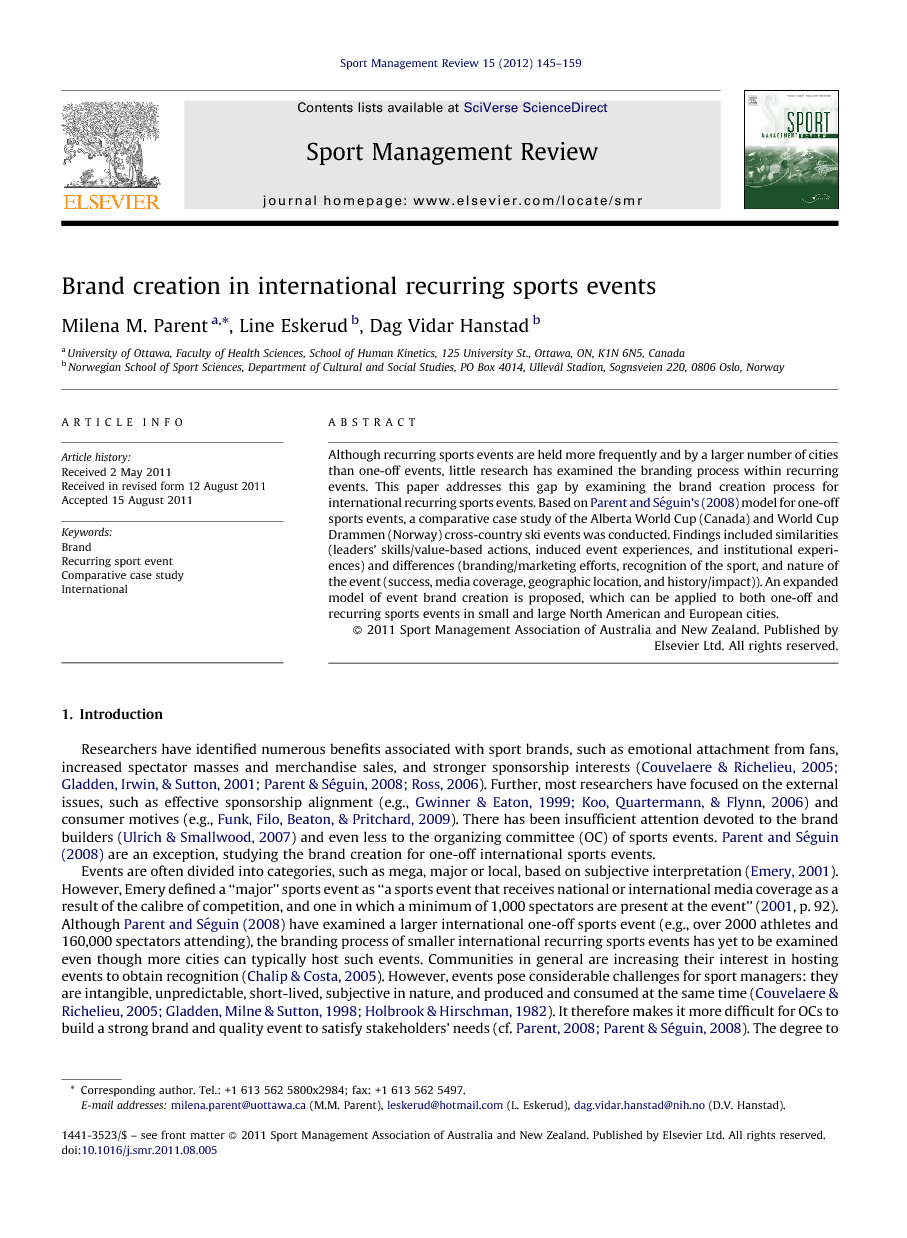 Although recurring sports events are held more frequently and by a larger number of cities than one-off events, little research has examined the branding process within recurring events. This paper addresses this gap by examining the brand creation process for international recurring sports events. Based on Parent and Séguin's (2008) model for one-off sports events, a comparative case study of the Alberta World Cup (Canada) and World Cup Drammen (Norway) cross-country ski events was conducted. Findings included similarities (leaders’ skills/value-based actions, induced event experiences, and institutional experiences) and differences (branding/marketing efforts, recognition of the sport, and nature of the event (success, media coverage, geographic location, and history/impact)). An expanded model of event brand creation is proposed, which can be applied to both one-off and recurring sports events in small and large North American and European cities.

Researchers have identified numerous benefits associated with sport brands, such as emotional attachment from fans, increased spectator masses and merchandise sales, and stronger sponsorship interests (Couvelaere and Richelieu, 2005, Gladden et al., 2001, Parent and Séguin, 2008 and Ross, 2006). Further, most researchers have focused on the external issues, such as effective sponsorship alignment (e.g., Gwinner and Eaton, 1999 and Koo et al., 2006) and consumer motives (e.g., Funk, Filo, Beaton, & Pritchard, 2009). There has been insufficient attention devoted to the brand builders (Ulrich & Smallwood, 2007) and even less to the organizing committee (OC) of sports events. Parent and Séguin (2008) are an exception, studying the brand creation for one-off international sports events. Events are often divided into categories, such as mega, major or local, based on subjective interpretation (Emery, 2001). However, Emery defined a “major” sports event as “a sports event that receives national or international media coverage as a result of the calibre of competition, and one in which a minimum of 1,000 spectators are present at the event” (2001, p. 92). Although Parent and Séguin (2008) have examined a larger international one-off sports event (e.g., over 2000 athletes and 160,000 spectators attending), the branding process of smaller international recurring sports events has yet to be examined even though more cities can typically host such events. Communities in general are increasing their interest in hosting events to obtain recognition (Chalip & Costa, 2005). However, events pose considerable challenges for sport managers: they are intangible, unpredictable, short-lived, subjective in nature, and produced and consumed at the same time (Couvelaere and Richelieu, 2005, Gladden et al., 1998 and Holbrook and Hirschman, 1982). It therefore makes it more difficult for OCs to build a strong brand and quality event to satisfy stakeholders’ needs (cf. Parent, 2008 and Parent and Séguin, 2008). The degree to which a high quality event can be achieved is strongly affected by the organizers’ relationships with various stakeholders (Parent, 2008). Stakeholders are individuals or groups who can affect the organization or be affected by its actions (Jones, 1995). Examples of stakeholders in a sport event include: the community residents and sponsors, media (local, national, and international), various levels of government, the organizers’ paid staff and volunteer base, delegations, and sport organizations (locally, nationally, and internationally) (Parent, 2008). For organizers to be able to effectively build a brand for their event, they need to be aware of factors that are likely to have an impact on the brand process. A “good” brand will allow the event to be seen as desirable by stakeholders, such as sponsors and ticketholders, thereby allowing the organizers to garner resources from these stakeholders (cf. Parent, 2008). Thus, the purpose of this paper is to examine the brand creation process for international recurring sports events. To do so, we take, as our starting point, Parent and Séguin's (2008) model and use the International Ski Federation (FIS) Cross-Country Alberta (Canada) World Cup 2008 and the FIS Cross-Country World Cup Drammen (Norway) 2008 as case studies. This paper thereby fills a gap in the literature by (1) examining a smaller sports event in two different countries and in smaller cities; (2) examining recurring sports events; and (3) testing Parent and Séguin's (2008) model. Findings could support and extend Parent and Séguin's model, making the revised model applicable to one-off and recurring sports events in small and large North American and European cities. Recurring event organizers have time to fine-tune (or even reconstruct) their brand from one year to the next; however, the event must still be perceived by the rights holders (the parent organization, typically the international federation, hereafter IF) as successful to have the chance to host the event again. The paper begins with a presentation of the theoretical framework. This is followed by a description of the methods. The results are then presented and discussed. Finally, concluding remarks and future directions are provided.

This study applied Parent and Séguin's (2008) framework to sports events of a recurring nature, and insights gained from the similarity/difference discussion related to the selected cases were used to inform the framework. Findings unveiled, and thereby supported the authors’ notion, that the leadership, context, and nature of the event function as key components in the branding process. Together with the leadership's political/network skills, business/management skills, and sport/event skills, the organization's core values represent another key antecedent, which determines the leaders’ actions and behaviours regarding the brand creation process. However, the leaders’ effect on the event brand was moderated by induced event experience elements, in addition to the context. It also became evident that institutional affiliations with the respective NSO strongly affect the branding process. Although the OCs studied assessed several of the abovementioned factors, their event brand processes were, and still are, largely determined by the sport's national stance and the mode of operation of the parent organization (IF/NSO) related to the nature of the event factor. As suggested by Parent and Séguin (2008), and further supported by findings in this study, a deeper understanding of barriers to international sports event branding is needed. Today, the FIS is striving to present a more united sport; but until they manage to establish a brand on which the organizers can build their identity, the various World Cups will continue to display vast discrepancies. In contrast to the brand creation process for one-off sports events, it appears that recurring event organizers can allow themselves time to refine their brand after event execution and before their next seasonal happening. While this can give a (perhaps false) sense of security, they still need to produce a successful event in their first attempt, as the competition to host such events is fierce and the long term event schedule (at least for the FIS) is by no means final. Future research could apply the same concepts to other sports to see if these findings are representative of the recurring event setting or if other factors need to be included. For example, while not emphasized in this study, the Alberta World Cup allocated some of its sponsorship money to disabled skiers in the province. As well, community involvement has been found as part of a sports team's branding approach (Richelieu & Pons, 2006); however, whether or not this is the case for event brands remains to be studied. Future research could be conducted through surveys to multiple events/contexts in order to test the relationships proposed in this paper's model. It might also be fruitful to explore the entire branding process from antecedents, to event brand, to outcomes of having a brand, in order to achieve a more complete picture of the branding process, including creation and management. This could be done using a similar methodology to the one presented here. This paper mainly followed an organizers’ perspective. Consequently, a possibility for future research is to follow a spectator perspective and explore their point of view, particularly related to event experience elements. It would also be interesting to include the top athletes’ perception on event branding. After all, they are the ones who compete in such events for a living. Other stakeholders’ (e.g., governments) perspectives could also be examined to complete the picture. Interviews with the different stakeholders would allow this information to be garnered. Finally, it would be important to explore the relationship between event branding and destination branding (Chalip et al., 2003 and Chalip and Costa, 2005). One emerging topic from the present analysis, which was beyond the scope of this paper, was sport event tourism. Although it may be difficult to determine a direct link, several of the interviewees mentioned that Drammen had experienced an increased number of visitors after they started hosting the World Cup. Recurring sports events’ role in destination branding and their effect on peoples’ intention to visit ought to be explored further both qualitatively and quantitatively. In conclusion, although there are a few notable differences which must be considered by event brand managers, we find many similarities between hosts of the same event in different countries, as well as between one-off and recurring sports events. This could facilitate brand managers’ efforts. From a theoretical standpoint, the fact that Parent and Séguin's (2008) model has been applied in Canada and Norway in large and small towns for both aquatic sports and cross-country skiing allows us to suggest that our revised model can serve as a basis for other single-sport recurring events, as well as one-off events in North America and Europe. The extent to which the revised model can be applied to multi-sport events and those in other continents remains to be examined.