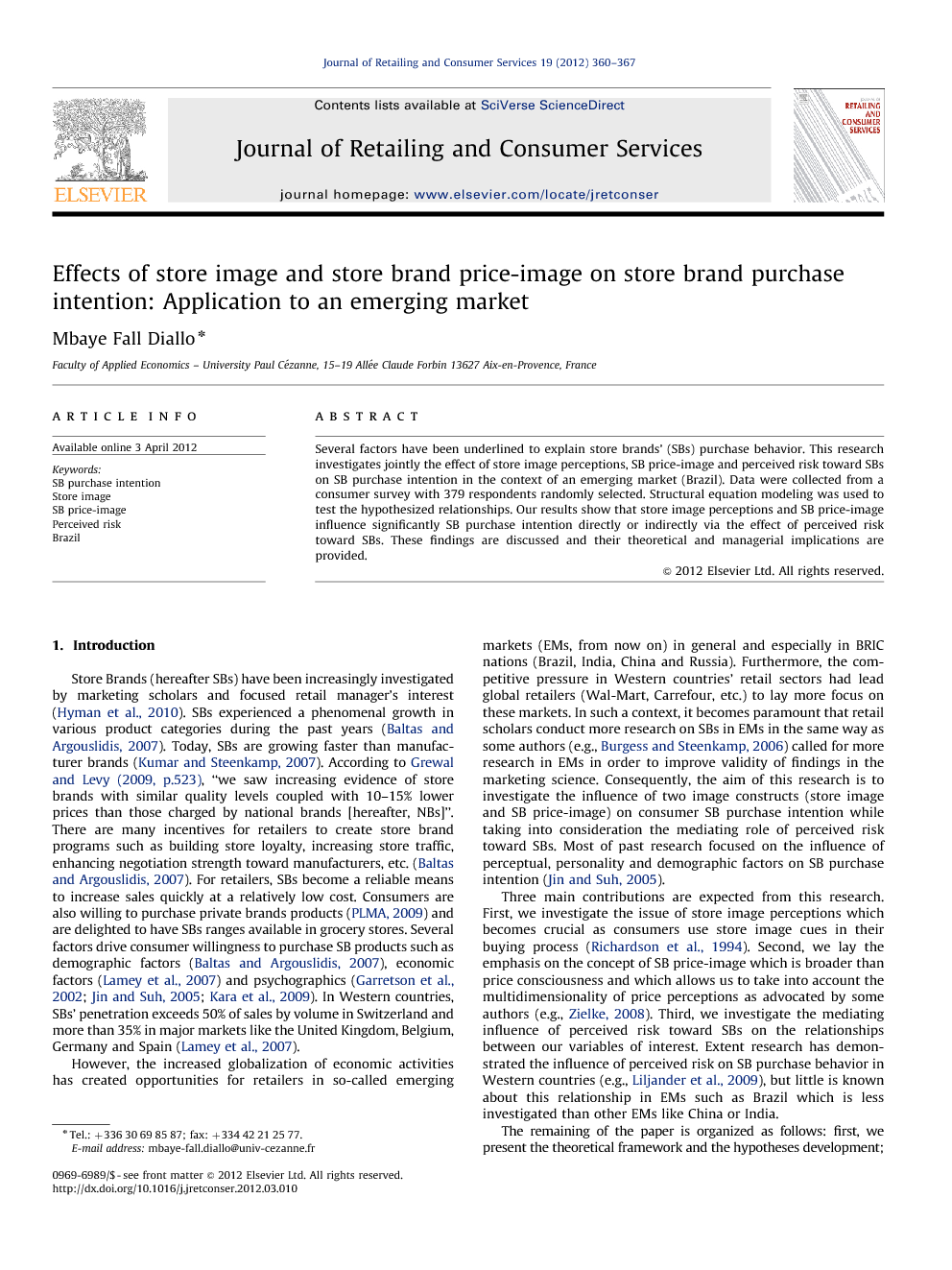 Several factors have been underlined to explain store brands' (SBs) purchase behavior. This research investigates jointly the effect of store image perceptions, SB price-image and perceived risk toward SBs on SB purchase intention in the context of an emerging market (Brazil). Data were collected from a consumer survey with 379 respondents randomly selected. Structural equation modeling was used to test the hypothesized relationships. Our results show that store image perceptions and SB price-image influence significantly SB purchase intention directly or indirectly via the effect of perceived risk toward SBs. These findings are discussed and their theoretical and managerial implications are provided.

Store Brands (hereafter SBs) have been increasingly investigated by marketing scholars and focused retail manager’s interest (Hyman et al., 2010). SBs experienced a phenomenal growth in various product categories during the past years (Baltas and Argouslidis, 2007). Today, SBs are growing faster than manufacturer brands (Kumar and Steenkamp, 2007). According to Grewal and Levy (2009, p.523), “we saw increasing evidence of store brands with similar quality levels coupled with 10–15% lower prices than those charged by national brands [hereafter, NBs]”. There are many incentives for retailers to create store brand programs such as building store loyalty, increasing store traffic, enhancing negotiation strength toward manufacturers, etc. (Baltas and Argouslidis, 2007). For retailers, SBs become a reliable means to increase sales quickly at a relatively low cost. Consumers are also willing to purchase private brands products (PLMA, 2009) and are delighted to have SBs ranges available in grocery stores. Several factors drive consumer willingness to purchase SB products such as demographic factors (Baltas and Argouslidis, 2007), economic factors (Lamey et al., 2007) and psychographics (Garretson et al., 2002, Jin and Suh, 2005 and Kara et al., 2009). In Western countries, SBs' penetration exceeds 50% of sales by volume in Switzerland and more than 35% in major markets like the United Kingdom, Belgium, Germany and Spain (Lamey et al., 2007). However, the increased globalization of economic activities has created opportunities for retailers in so-called emerging markets (EMs, from now on) in general and especially in BRIC nations (Brazil, India, China and Russia). Furthermore, the competitive pressure in Western countries' retail sectors had lead global retailers (Wal-Mart, Carrefour, etc.) to lay more focus on these markets. In such a context, it becomes paramount that retail scholars conduct more research on SBs in EMs in the same way as some authors (e.g., Burgess and Steenkamp, 2006) called for more research in EMs in order to improve validity of findings in the marketing science. Consequently, the aim of this research is to investigate the influence of two image constructs (store image and SB price-image) on consumer SB purchase intention while taking into consideration the mediating role of perceived risk toward SBs. Most of past research focused on the influence of perceptual, personality and demographic factors on SB purchase intention (Jin and Suh, 2005). Three main contributions are expected from this research. First, we investigate the issue of store image perceptions which becomes crucial as consumers use store image cues in their buying process (Richardson et al., 1994). Second, we lay the emphasis on the concept of SB price-image which is broader than price consciousness and which allows us to take into account the multidimensionality of price perceptions as advocated by some authors (e.g., Zielke, 2008). Third, we investigate the mediating influence of perceived risk toward SBs on the relationships between our variables of interest. Extent research has demonstrated the influence of perceived risk on SB purchase behavior in Western countries (e.g., Liljander et al., 2009), but little is known about this relationship in EMs such as Brazil which is less investigated than other EMs like China or India. The remaining of the paper is organized as follows: first, we present the theoretical framework and the hypotheses development; second, we develop the research methodology; third, the results are detailed; and finally, we propose theoretical and managerial implications of the findings and point out limitations and research orientations for future studies.

The aim of this research was to propose and test a conceptual model of the relationships between image factors and SB purchase intention in the Brazilian market while taking into account the influence of perceived risk toward SBs. In this final section, we discuss our research implications, identify the paper limitations and propose orientations for future research. 5.1. Theoretical implications This research has several theoretical contributions. First, previous research focused mainly on perceptual, demographic and psychographic factors to explain SB purchase intention (Burton et al., 1998 and Jin and Suh, 2005). In this research, we demonstrated that image factors and perceived risk toward SBs are also strong predictors of SB purchase intention in the context of a less investigated emerging market, Brazil. We then responded to scholars call for more research in emerging countries in order to improve generalization of results in the marketing science (e.g., Burgess and Steenkamp, 2006). Second, demographic variables (gender and age) as well as household income were included as control variables of variations in SB purchase intention. Only household income was found to influence negatively SB purchase intention. This finding is in line with previous research reporting inconclusive results of the effect of socio-demographic variables on SB purchase behavior (Martinez and Montaner, 2008). Third, in past research, authors referred to SB price mainly in absolute terms, that is to say, without taking into account the presence of multiple retailers in a given market and the multidimensionality of price perceptions. For instance, price consciousness has been widely investigated as a predictor of SB purchase behavior (e.g., Garretson et al., 2002). In this research, we proposed perceived price-image as a reference of SB price as it is more dynamic and takes into account the multidimensional aspect of price perceptions as highlighted by Zielke (2008). As no previous work was found on SB price-image measurement, we then proposed and validated a measurement scale of this construct based upon both a qualitative research and previous studies (Zeithaml, 1988 and Zielke, 2010). The validated scale was found to have sound psychometric properties and may serve as a basis for future research. 5.2. Managerial implications Managerial implications of this study must be highlighted. It is generally recognized that consumers use store image dimensions (layout, merchandise, service, etc.) as cues to make inference about store brands purchase behavior (cue utilization theory; see Richardson et al., 1994). This research confirms this result as the store image perceptions influence only indirectly SB purchase intention through perceived risk toward SBs. The direct and positive relationship between store image and purchase intention established in previous research (e.g., Grewal et al., 1998) was not significant. One explanation of this result is that consumers rely on store image attributes only as cues for their SB decision making (Richardson et al., 1994). Retail managers must be then aware that improving store image does not always lead directly to greater purchase intention, especially in the context of the Brazilian market investigated. Consequently, store image improvement programs must be coupled with strategies of perceived risk reduction toward SBs. In fact, perceived risk associated with SBs was shown to influence negatively consumer purchase behavior toward SBs in previous studies (Batra and Sinha, 2000 and Garretson et al., 2002). This research confirms also this finding in the Brazilian context as perceived risk toward SBs influenced negatively SB purchase intention and also mediated significantly the relationships between store image perceptions, SB price-image and SB purchase intention. Finally, this research shows that SB price-image and store-image perceptions are key elements of SB purchase intention in the Brazilian market. Given the relative strong influence of image factors found in this research, we recommend that managers operating in emerging markets put more emphasis on SB price-image and store image management. Most of the consumers in these markets (middle class consumers) are seeking consideration when shopping and especially focus on image factors. Given the tremendous access to mass media, they are aware of the consumption trends in more developed countries and are trying to have the same standards of living than Western countries’ consumers. 5.3. Limitations and orientation for future research This study has some limitations. First, it was conducted in one emerging market (Brazil). So, caution should be used in generalizing the results to other emerging markets. Second, we were not able to test the isolated effect of perceived risk toward SBs' dimensions (functional risk and financial) on the dependent variable as done by Liljander et al. (2009) or by Smeijn et al. (2004). In fact, perceived toward SBs is conceptualized here as a second-order two-dimensional constructs because the two dimensions were highly correlated and yielded better results than any other conceptualizations. The results of this study open several avenues for future research activities. It would be interesting to replicate it in other EM countries in order to see if there are differences between emerging markets (Russia, India, China, etc.). It would be also interesting to test the model in different retailers and different product categories. Comparing emerging market’s consumers to Western countries' consumers using the validated model would be also an interesting step as this would allow drawing conclusions taking into consideration the country's level of development.