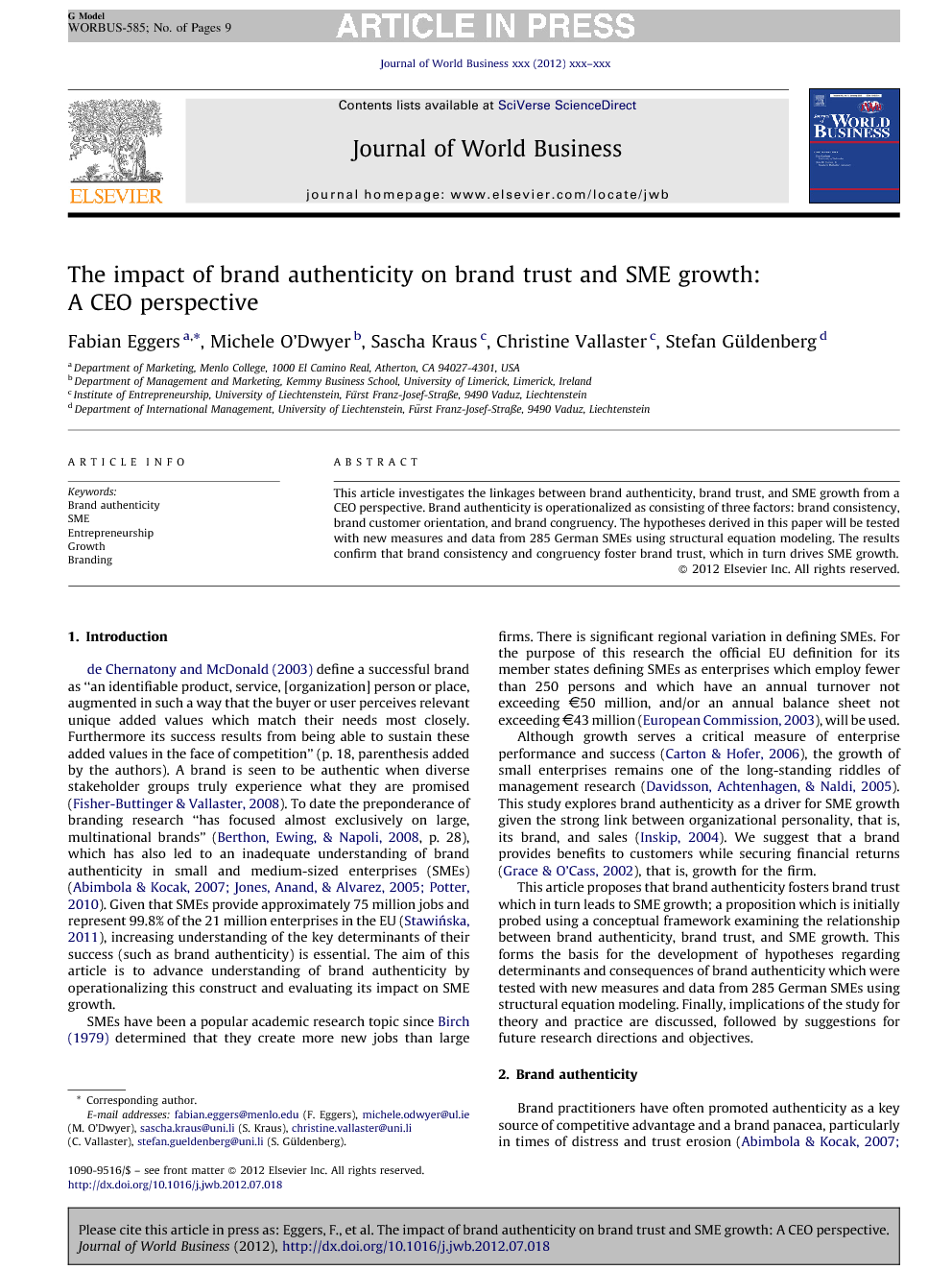 This article investigates the linkages between brand authenticity, brand trust, and SME growth from a CEO perspective. Brand authenticity is operationalized as consisting of three factors: brand consistency, brand customer orientation, and brand congruency. The hypotheses derived in this paper will be tested with new measures and data from 285 German SMEs using structural equation modeling. The results confirm that brand consistency and congruency foster brand trust, which in turn drives SME growth.

de Chernatony and McDonald (2003) define a successful brand as “an identifiable product, service, [organization] person or place, augmented in such a way that the buyer or user perceives relevant unique added values which match their needs most closely. Furthermore its success results from being able to sustain these added values in the face of competition” (p. 18, parenthesis added by the authors). A brand is seen to be authentic when diverse stakeholder groups truly experience what they are promised (Fisher-Buttinger & Vallaster, 2008). To date the preponderance of branding research “has focused almost exclusively on large, multinational brands” (Berthon, Ewing, & Napoli, 2008, p. 28), which has also led to an inadequate understanding of brand authenticity in small and medium-sized enterprises (SMEs) (Abimbola and Kocak, 2007, Jones et al., 2005 and Potter, 2010). Given that SMEs provide approximately 75 million jobs and represent 99.8% of the 21 million enterprises in the EU (Stawińska, 2011), increasing understanding of the key determinants of their success (such as brand authenticity) is essential. The aim of this article is to advance understanding of brand authenticity by operationalizing this construct and evaluating its impact on SME growth. SMEs have been a popular academic research topic since Birch (1979) determined that they create more new jobs than large firms. There is significant regional variation in defining SMEs. For the purpose of this research the official EU definition for its member states defining SMEs as enterprises which employ fewer than 250 persons and which have an annual turnover not exceeding €50 million, and/or an annual balance sheet not exceeding €43 million (European Commission, 2003), will be used. Although growth serves a critical measure of enterprise performance and success (Carton & Hofer, 2006), the growth of small enterprises remains one of the long-standing riddles of management research (Davidsson, Achtenhagen, & Naldi, 2005). This study explores brand authenticity as a driver for SME growth given the strong link between organizational personality, that is, its brand, and sales (Inskip, 2004). We suggest that a brand provides benefits to customers while securing financial returns (Grace & O’Cass, 2002), that is, growth for the firm. This article proposes that brand authenticity fosters brand trust which in turn leads to SME growth; a proposition which is initially probed using a conceptual framework examining the relationship between brand authenticity, brand trust, and SME growth. This forms the basis for the development of hypotheses regarding determinants and consequences of brand authenticity which were tested with new measures and data from 285 German SMEs using structural equation modeling. Finally, implications of the study for theory and practice are discussed, followed by suggestions for future research directions and objectives.

As illustrated in our theory section, brand authenticity is captured on three dimensions, namely brand consistency, brand congruency, and brand customer orientation. Interestingly, our study confirmed hypotheses 1, 3, and 4. Hypothesis 2 was not confirmed since we did not find a positive relationship between brand customer orientation and SME brand trust. Thus, although considered part of brand authenticity customer orientation alone does not increase SME brand trust. This leads to the question if brand authenticity could better be captured with a one-dimensional measure that includes all three sub-dimensions. An additional regression analysis showed that handling the three dimensions as independent measures, as used in our study, is superior to the one-dimensional approach since it explains more variance of SME brand trust (View the MathML sourceRindependent2=.447, View the MathML sourceRone-dimensional2=.370). Thus, our study shows that brand consistency and brand congruency are significant drivers for brand authenticity, which in turn impacts brand trust and subsequently SME growth. This, however, seems to be particularly the case for larger SMEs. The contribution of this paper is twofold: (1) Studies such as Beverland, 2005a, Beverland, 2005b and Beverland, 2006 or Alexander (2009) investigate brand authenticity based on qualitative data. In this study, the construct brand authenticity was operationalized for the first time in a quantitative study, and robustly measured the positive impact of congruency and consistency on brand trust in SMEs. (2) The finding of this study also corroborates the notion that brand trust fosters sustainable business success, and SME growth in particular (for example Vallaster & Kraus, 2011). With the first hypothesis on consistency, the results have shown that organizations may considerably enhance brand trust by being consistent in whatever they do. A defined vision and strategy, along with a single set of values that come from within and are rooted in a company's history (Fombrun & van Riel, 2001) subsequently drive all brand actions and decisions. The focus on a defined number of core values seems to help to adequately prioritize resources and tasks and consistently direct important decisions. Brown et al. (2003) alternatively use the term ‘brand essence’ which is, as they argue, highly related to authenticity. Once the company has become sufficiently committed to the value core in such a way that it helps determine the course of company actions and as a result conveys ‘the real thing’ (‘indexicality’ as coined by Grayson & Martinec, 2004), this facilitates the perception of brand authenticity across stakeholder groups, and hence brand trust. Hypothesis 3 suggests that value-driven brand management strengthens brand trust. In an SME context, entrepreneurship is defined as a set of values related to being innovative, proactive, and risk-taking (Covin and Slevin, 1989 and Kraus, 2012). These values characterize an ‘entrepreneurial mindset’ and can lead to the identification of market opportunities and their exploitation by combining or recombining resources that are available to the entrepreneurial venture (Davidsson et al., 2002, Ireland et al., 2001 and Sexton and Smilor, 1997). Employees who relate to such values and show resulting entrepreneurial behaviours contribute to actively building strong brands and generate growth that can help gain a competitive advantage. In contrast to prior work, this study has specifically focused on SME growth based on brand authenticity (see H4). While studies in SME marketing and entrepreneurial marketing have investigated the influence of customer and market orientations on growth (Eggers and Kraus, 2011 and Kara et al., 2005Pelham, 2000 and Verhees and Meulenberg, 2004) or discussed branding in the context of SMEs (Abimbola and Vallaster, 2007, Peters et al., 2010 and Wong and Merrilees, 2005), this study is the first one to empirically investigate the influence of branding on SME growth using large-scale quantitative data. Two dimensions have been shown to have a significant effect on SME growth: brand consistency and brand congruency. While Witt and Rode (2005) empirically show that building up a brand benefits the long-term prospects of start-ups, the study confirms that consistent and congruent brand management facilitates brand trust and SME growth as a result. The positive relationship between brand trust and business success has been confirmed by Chaudhuri and Holbrook (2001) who find strong evidence in support of a significant association between brand trust, and both buying and attitudinal loyalty. In order to test the model, different sources for authenticity measures were utilized and merged, this enabled identification of different dimensions through factor analysis. This is a common procedure in management research (see for example Roskos and Klandt, 2006 and Sciascia et al., 2006) and given the absence of appropriate measures, this was the most apt way to test the hypotheses. The limitations of the study include that brand authenticity and growth is captured through self-reported measures only, leading to a certain bias in answers. Furthermore, SEM was not tested on an independent sample, which would have allowed utility confirmation. Also, it must be noted that an online study was utilized for data collection. Although electronic data collection methods are becoming increasingly common, it is still possible that the method led to bias in the findings, notably non-response bias whereby the study cannot account for those firms that did not participate in the survey. By comparing those firms who responded early with those that responded after a reminder an approximation of this bias was possible. As discussed in the results section there were no significant differences between the two groups.