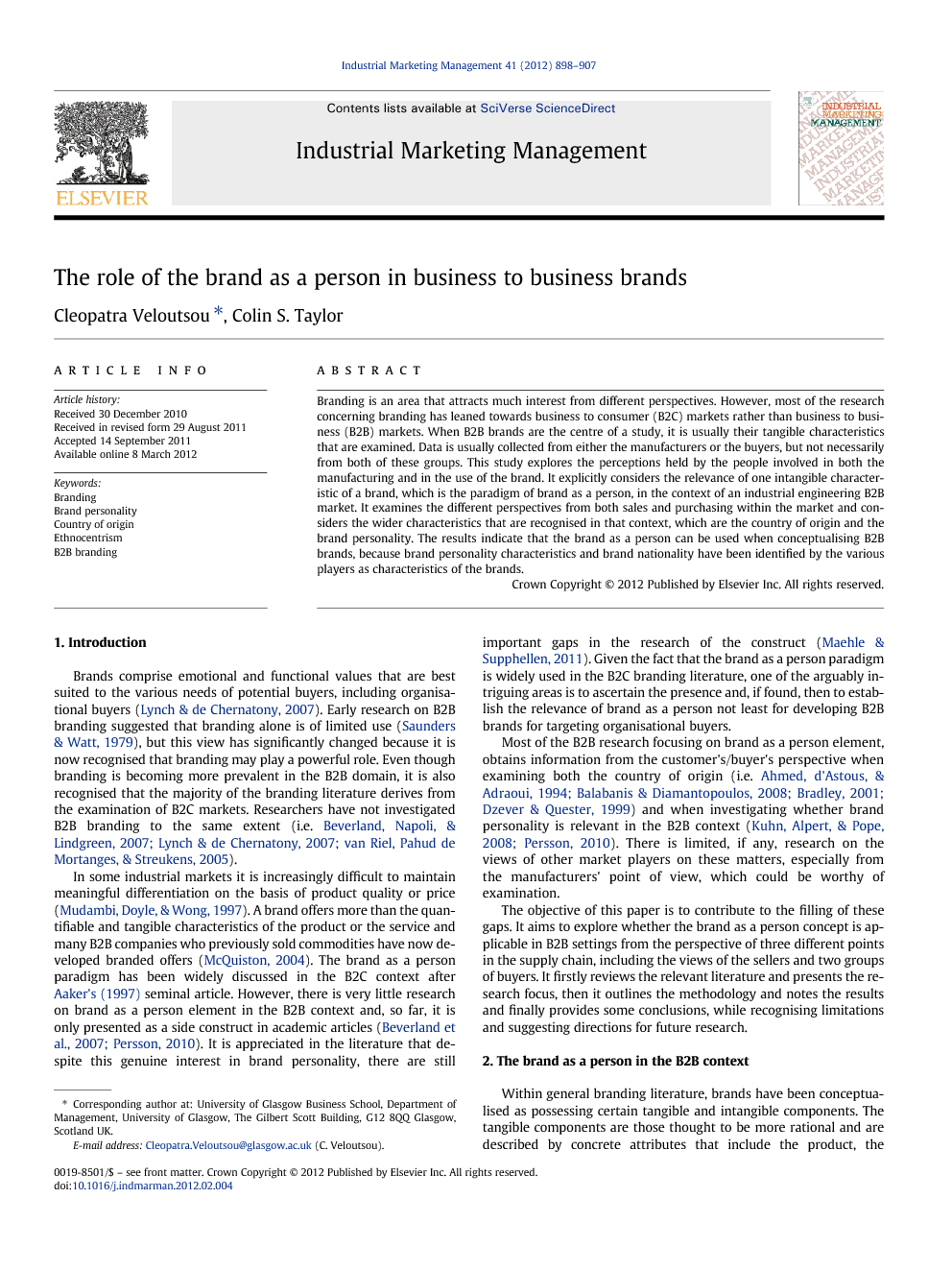 Branding is an area that attracts much interest from different perspectives. However, most of the research concerning branding has leaned towards business to consumer (B2C) markets rather than business to business (B2B) markets. When B2B brands are the centre of a study, it is usually their tangible characteristics that are examined. Data is usually collected from either the manufacturers or the buyers, but not necessarily from both of these groups. This study explores the perceptions held by the people involved in both the manufacturing and in the use of the brand. It explicitly considers the relevance of one intangible characteristic of a brand, which is the paradigm of brand as a person, in the context of an industrial engineering B2B market. It examines the different perspectives from both sales and purchasing within the market and considers the wider characteristics that are recognised in that context, which are the country of origin and the brand personality. The results indicate that the brand as a person can be used when conceptualising B2B brands, because brand personality characteristics and brand nationality have been identified by the various players as characteristics of the brands.

Brands comprise emotional and functional values that are best suited to the various needs of potential buyers, including organisational buyers (Lynch & de Chernatony, 2007). Early research on B2B branding suggested that branding alone is of limited use (Saunders & Watt, 1979), but this view has significantly changed because it is now recognised that branding may play a powerful role. Even though branding is becoming more prevalent in the B2B domain, it is also recognised that the majority of the branding literature derives from the examination of B2C markets. Researchers have not investigated B2B branding to the same extent (i.e. Beverland et al., 2007, Lynch and de Chernatony, 2007 and van Riel et al., 2005). In some industrial markets it is increasingly difficult to maintain meaningful differentiation on the basis of product quality or price (Mudambi, Doyle, & Wong, 1997). A brand offers more than the quantifiable and tangible characteristics of the product or the service and many B2B companies who previously sold commodities have now developed branded offers (McQuiston, 2004). The brand as a person paradigm has been widely discussed in the B2C context after Aaker's (1997) seminal article. However, there is very little research on brand as a person element in the B2B context and, so far, it is only presented as a side construct in academic articles (Beverland et al., 2007 and Persson, 2010). It is appreciated in the literature that despite this genuine interest in brand personality, there are still important gaps in the research of the construct (Maehle & Supphellen, 2011). Given the fact that the brand as a person paradigm is widely used in the B2C branding literature, one of the arguably intriguing areas is to ascertain the presence and, if found, then to establish the relevance of brand as a person not least for developing B2B brands for targeting organisational buyers. Most of the B2B research focusing on brand as a person element, obtains information from the customer's/buyer's perspective when examining both the country of origin (i.e. Ahmed et al., 1994, Balabanis and Diamantopoulos, 2008, Bradley, 2001 and Dzever and Quester, 1999) and when investigating whether brand personality is relevant in the B2B context (Kuhn et al., 2008 and Persson, 2010). There is limited, if any, research on the views of other market players on these matters, especially from the manufacturers' point of view, which could be worthy of examination. The objective of this paper is to contribute to the filling of these gaps. It aims to explore whether the brand as a person concept is applicable in B2B settings from the perspective of three different points in the supply chain, including the views of the sellers and two groups of buyers. It firstly reviews the relevant literature and presents the research focus, then it outlines the methodology and notes the results and finally provides some conclusions, while recognising limitations and suggesting directions for future research.

There are a number of limitations to this paper. The research is based around one product category and one particular market. Other than consulting engineers, the study did not include other design team members (architects), or valve distributors. The investigation focuses on only one product category and only two customer groups (consulting engineers and buyers), and it may not be possible to usefully extrapolate the findings and conclusions to other products, markets, sectors, or B2B environments and to other customer groups. The fact that a limited set of personality traits were offered by some of the manufacturers might be due to the fact that only one interview was performed with four manufacturing firms. Furthermore, four out of five participants representing manufacturers work in sales positions. Therefore the views expressed by the manufacturers as a whole may generally reflect a sales perspective rather than for example an operations perspective. So, the result could be highly influenced by the personality and the individual views of the informant, rather than the overall perception of each of the three manufacturers. Nonetheless, this is encountered often in exploratory qualitative research. Although attempts are made to reduce interviewer bias; such as through the use of external assistance with transcripts and analysis and the like, bias cannot be removed entirely. This is a notable feature of qualitative analysis and does not necessarily limit the research but it is something that must be taken into consideration because, in essence, one person's interpretation, using a small sample size cannot, and should not, be considered representative of the entire market. Further research may attempt to overcome some of the shortcomings of this study. It could use a more quantitative approach to examine and compare the role of the brand as a person issues in the B2B market; as perceived by various players in one industry and confirm similarities and differences in their views. The role of brand personality in the evaluation of the business offering should be further examined. Plus, due to the nature of B2B markets, qualitative research should be firstly conducted to identify personality traits that are more appropriate for the business customers. The fact that some of the adjectives used to describe the brands differ from existing academic research indicates that the conceptualisation of the brand personality dimensions used in other contexts are not appropriate in this context. This is consistent with existing research which is identifying different personality traits in different contexts. Therefore, a new scale should be developed. In this paper it is indicated that the specific characteristics of the organisational buying and the relative rationality, when compared with the consumer market, seem to influence the expected personality of a well respected brand in the market. Researchers in the past used participants in a qualitative approach to include unique traits that fitted the research sample culture (Venable, Rose, & Gilbert, 2003) and clearly there is a need to develop appropriate scales for this context. The research can then move to the investigation of the role of brand personality in the evaluation, intentions and behaviour of business customers. It would also be interesting to identify countries that are perceived to be of similar development with the home country in terms of engineering and examine the perceptions of COO and ethnocentrism under these conditions. The various intangible characteristics of the brand, including the characteristics of brand as a person, together with the various tangible characteristics could be used as brand attributes in future research to examine the consequences of the buyers' actions. This will require the use of the means and chain theory (Gutman, 1982 and Gutman, 1984).