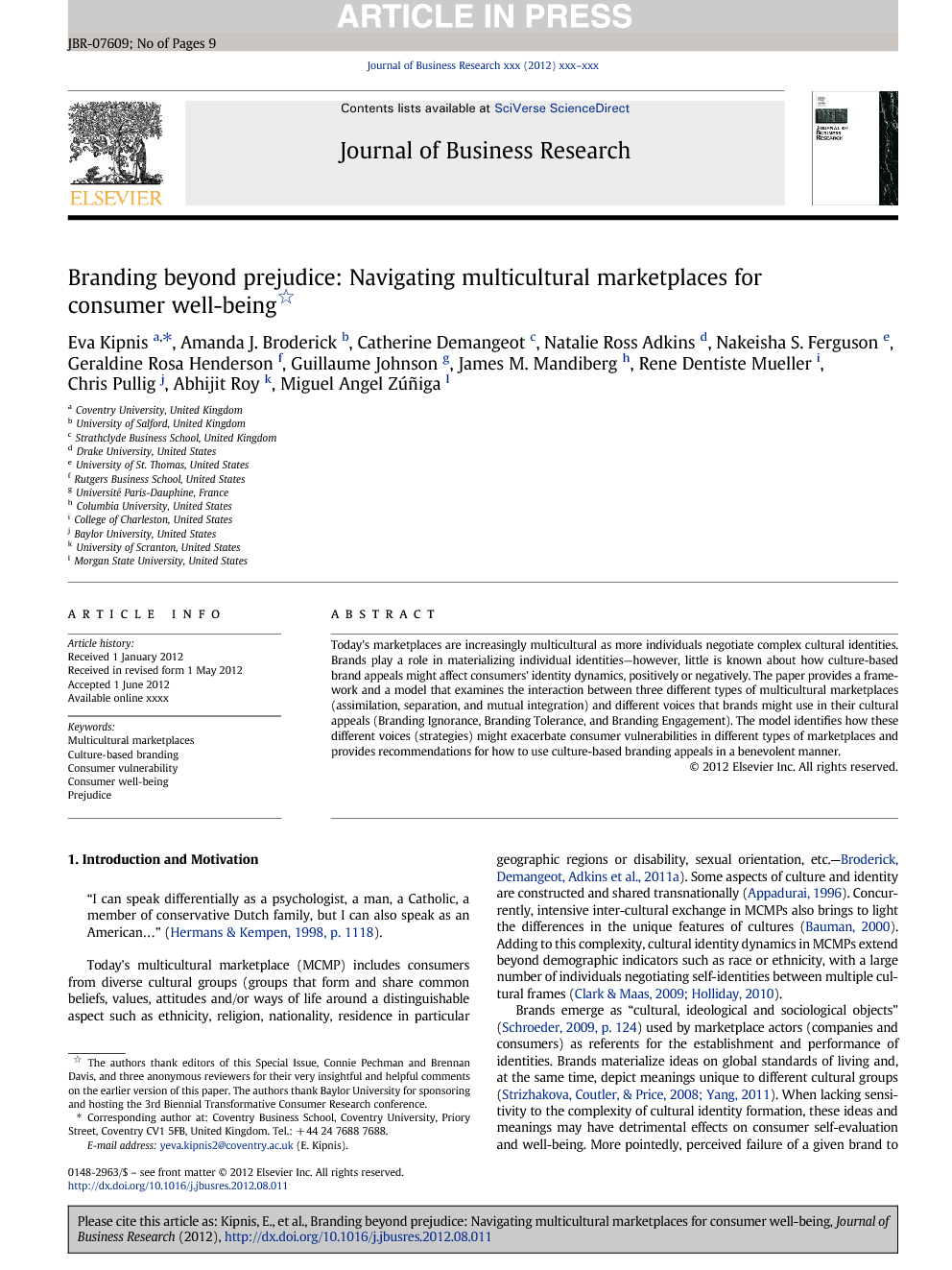 Today's marketplaces are increasingly multicultural as more individuals negotiate complex cultural identities. Brands play a role in materializing individual identities—however, little is known about how culture-based brand appeals might affect consumers' identity dynamics, positively or negatively. The paper provides a framework and a model that examines the interaction between three different types of multicultural marketplaces (assimilation, separation, and mutual integration) and different voices that brands might use in their cultural appeals (Branding Ignorance, Branding Tolerance, and Branding Engagement). The model identifies how these different voices (strategies) might exacerbate consumer vulnerabilities in different types of marketplaces and provides recommendations for how to use culture-based branding appeals in a benevolent manner.

“I can speak differentially as a psychologist, a man, a Catholic, a member of conservative Dutch family, but I can also speak as an American…” (Hermans & Kempen, 1998, p. 1118). Today's multicultural marketplace (MCMP) includes consumers from diverse cultural groups (groups that form and share common beliefs, values, attitudes and/or ways of life around a distinguishable aspect such as ethnicity, religion, nationality, residence in particular geographic regions or disability, sexual orientation, etc.—Broderick, Demangeot, Adkins et al., 2011a). Some aspects of culture and identity are constructed and shared transnationally (Appadurai, 1996). Concurrently, intensive inter-cultural exchange in MCMPs also brings to light the differences in the unique features of cultures (Bauman, 2000). Adding to this complexity, cultural identity dynamics in MCMPs extend beyond demographic indicators such as race or ethnicity, with a large number of individuals negotiating self-identities between multiple cultural frames (Clark and Maas, 2009 and Holliday, 2010). Brands emerge as “cultural, ideological and sociological objects” (Schroeder, 2009, p. 124) used by marketplace actors (companies and consumers) as referents for the establishment and performance of identities. Brands materialize ideas on global standards of living and, at the same time, depict meanings unique to different cultural groups (Strizhakova et al., 2008 and Yang, 2011). When lacking sensitivity to the complexity of cultural identity formation, these ideas and meanings may have detrimental effects on consumer self-evaluation and well-being. More pointedly, perceived failure of a given brand to recognize or be sensitive to individuals' cultural identities may create or intensify prejudicial and discriminatory cognitions towards particular persons and/or exacerbate their vulnerability, that is, a sense of identity threat from the actors (social institutions, other consumers) this brand represents (Broderick, Demangeot, Kipnis et al., 2011b). Threat perceptions harm individual consumers and fuel societal tensions by generating radical identity dynamics. These dynamics can range from measures to change or conceal identity (such as skin whitening) to withdrawal from or revolt against actors perceived to pose a threat (Maalouf, 2000). Conversely, careful alignment of brand identity with MCMPs' realities can create symbolic experiences of positive dynamics between (culturally) different groups. In general, the need for frameworks that integrate managerial concepts of brand identity and image with the sociocultural processes shaping consumer identities is growing (Schroeder, 2009). One perspective pertinent to address is that of consumer well-being and identity dynamics in situations when portrayal of cultural similarities and differences in brand identity may (intentionally or unintentionally) not align with the social meanings of (cultural) similarity and difference in MCMP contexts. This paper addresses this gap by developing a conceptual framework that integrates literature on branding and on consumer cultural identity formation within MCMPs differing in sociopolitical and inter-cultural dynamics. The proposed model of Cultural Branding Voice—Marketplace Alignment considers the effects on vulnerability and identity tensions of different voices that brands may adopt when using cultural appeals and provides recommendations to maintain balance between benevolence and effectiveness when developing brand identities in each type of MCMP. By considering the impact of different cultural branding voices on consumer well-being, the model makes an important contribution to the branding literature while identifying means of enhancing consumer well-being.

“This presents a unique opportunity to address the new consumer, not as a segment of a market, a minority, a majority, or other dividing classification, but as a human being….that forms a diverse [multicultural world]” (Ken Muench, draftFCB, Chicago, quoted in Aceves, 2011). Marketplaces are increasingly multicultural and challenging. Understanding how to create effective and benevolent cultural appeals is an important issue for both brand managers and consumers. The overall framework proposed in this paper indicates that cultural identity accessibility may vary by context and situation. Cultural identity may be chronically accessible for some groups and individuals; for others, branding appeals prompt the activation. Once activated, one's cultural identity acts as a frame to evaluate any culture-based brand appeal. The extent to which activated cultural identity, the appeal, and the brand are aligned or congruent influences the well-being or vulnerability of different cultural groups. The success and cultural benevolence of brand voices depends on the MCMP context and the Cultural Branding Voice – Marketplace Alignment Model offers recommendations on the strategies brand managers may use to minimize risks of aggravating the vulnerability of certain cultural groups. The model proposes a broader range of diagnostics of sociopolitical influences on development of consumer voices and the social effects of differing types of cultural cues on dominant and non-dominant populations. If perceived as a symbolic threat to cultural identities, branding appeals can aggravate vulnerability of target and non-target groups and lead to consumer revolt against the brand. The conceptualization aims to assist managers in the development of cultural cues that avoid producing a misalignment (and therefore a perceived identity threat) for any cultural group and consequently do not aggravate cultural tensions in MCMPs. Out of necessity, the current paradigm of multicultural marketing is evolving. This paper aims to further progress towards a more benevolent approach, where brands speak with a true and honest voice to all consumers. The paper's key contribution is the consideration of how a brand's cultural voice suits the characteristics and inter-group dynamics of a given MCMP. Within the MCMP, brand managers must consider the dynamics between and among multicultural groups and identity tensions which individuals within the dominant and non-dominant groups may experience. Managers must also integrate this consideration with an understanding of how individuals process brand messages within a given group context. Due to the accessibility of information, brands are facing a forced transparency. As a further complication, individuals in some MCMPs are more multicultural themselves—retaining aspects of their own unique experience while integrating aspects of others'. Assumptions of cultural identity require updating, to better understand today's consumer and the MCMP in general. The new paradigm for multicultural marketing will integrate an understanding of sociopolitical aspects of the MCMP with an understanding of the complexity of the cultural identity process. To achieve benevolence in today's MCMP, brands and organizations will have to live honesty and transparency.