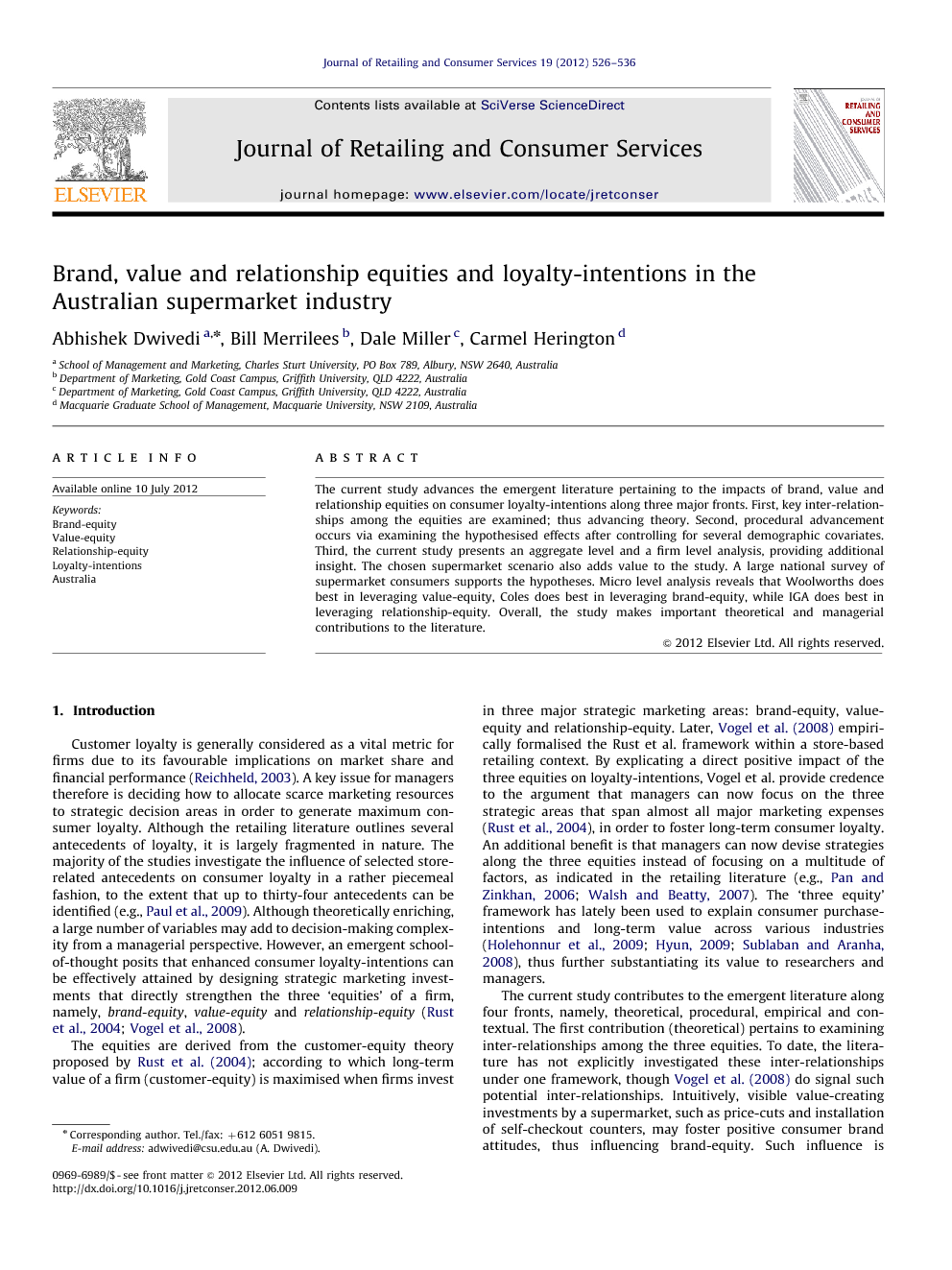 The current study advances the emergent literature pertaining to the impacts of brand, value and relationship equities on consumer loyalty-intentions along three major fronts. First, key inter-relationships among the equities are examined; thus advancing theory. Second, procedural advancement occurs via examining the hypothesised effects after controlling for several demographic covariates. Third, the current study presents an aggregate level and a firm level analysis, providing additional insight. The chosen supermarket scenario also adds value to the study. A large national survey of supermarket consumers supports the hypotheses. Micro level analysis reveals that Woolworths does best in leveraging value-equity, Coles does best in leveraging brand-equity, while IGA does best in leveraging relationship-equity. Overall, the study makes important theoretical and managerial contributions to the literature.

Findings of the current study should be accepted in light of its limitations. First, given the cross-sectional nature of the study, the findings provide a snapshot of consumer perceptions at a given time. Emergent research shows that value and brand related antecedents of loyalty-intentions tend to change over time (Johnson et al., 2006). Thus, a further extension of the current research could involve testing how consumer perceptions of brand, value and relationship equities evolve, and how these influence loyalty-intentions. Second, inertia, which is reluctance of consumers to switch away from the brand purchased in the previous occasion, was not controlled for in the current research. Given the recent recessionary economic conditions, marketplace evidence suggests that consumers are changing their grocery spending patterns, showing greater preference for cheaper home brands over national brands in supermarkets (Knight, 2011). Hence, lack of inclusion of an inertia variable might not affect the results too adversely. Future research should consider including an inertia variable (refer to Vogel et al., 2008) to add further robustness to the study. Third, not all members of the Australian supermarket shopper population may have access to the internet and as a result, this may have contributed to some element of a non-coverage bias in the data. However, given the internet penetration rate of around 80% in Australia, coverage bias is not expected to be a serious threat. Future research should be conducted to examine the hypothesized effects across a diverse range of industries in order to externally validate the findings, as well as to build an empirical base of knowledge in the area.