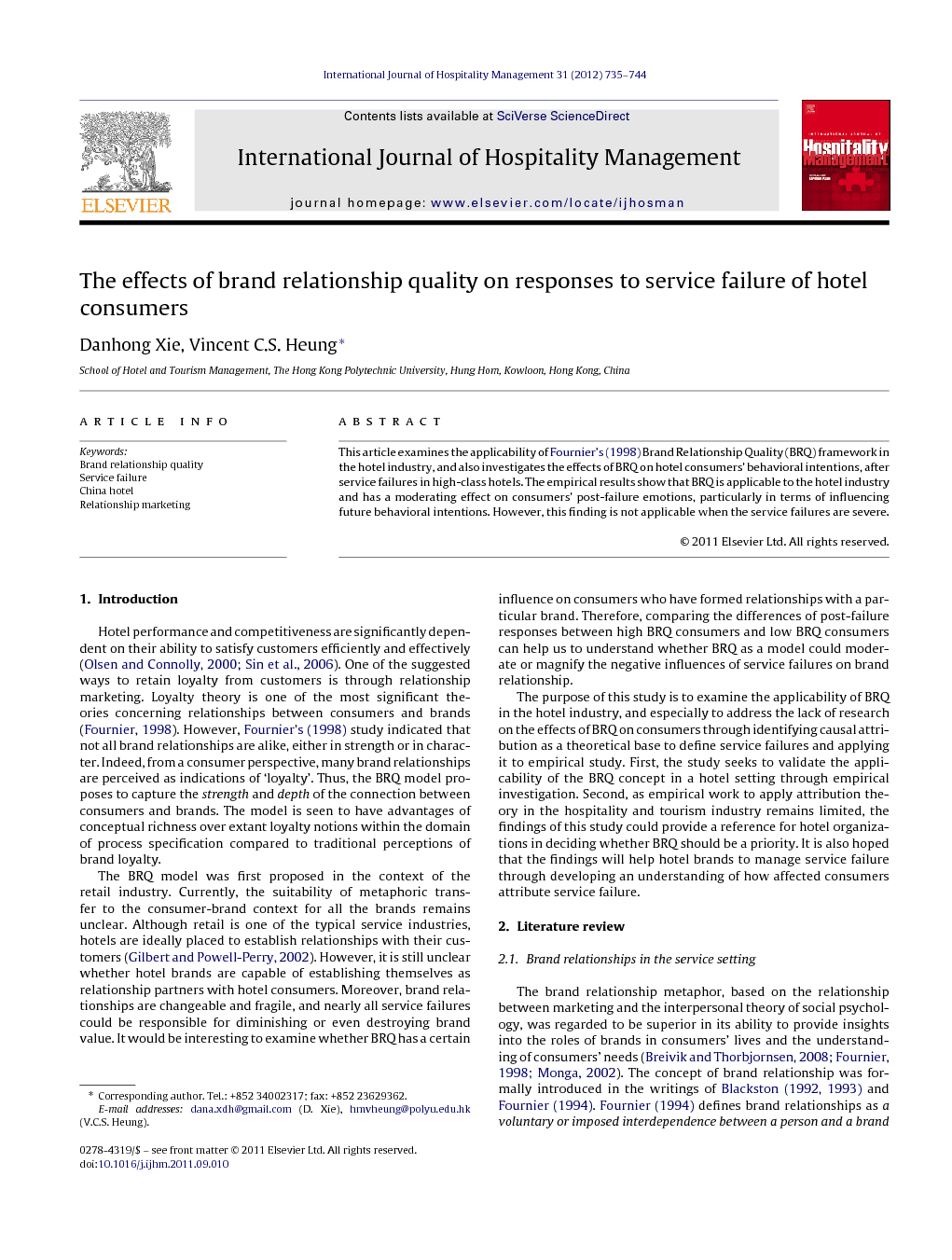 This article examines the applicability of Fournier's (1998) Brand Relationship Quality (BRQ) framework in the hotel industry, and also investigates the effects of BRQ on hotel consumers’ behavioral intentions, after service failures in high-class hotels. The empirical results show that BRQ is applicable to the hotel industry and has a moderating effect on consumers’ post-failure emotions, particularly in terms of influencing future behavioral intentions. However, this finding is not applicable when the service failures are severe.

Hotel performance and competitiveness are significantly dependent on their ability to satisfy customers efficiently and effectively (Olsen and Connolly, 2000 and Sin et al., 2006). One of the suggested ways to retain loyalty from customers is through relationship marketing. Loyalty theory is one of the most significant theories concerning relationships between consumers and brands (Fournier, 1998). However, Fournier's (1998) study indicated that not all brand relationships are alike, either in strength or in character. Indeed, from a consumer perspective, many brand relationships are perceived as indications of ‘loyalty’. Thus, the BRQ model proposes to capture the strength and depth of the connection between consumers and brands. The model is seen to have advantages of conceptual richness over extant loyalty notions within the domain of process specification compared to traditional perceptions of brand loyalty. The BRQ model was first proposed in the context of the retail industry. Currently, the suitability of metaphoric transfer to the consumer-brand context for all the brands remains unclear. Although retail is one of the typical service industries, hotels are ideally placed to establish relationships with their customers (Gilbert and Powell-Perry, 2002). However, it is still unclear whether hotel brands are capable of establishing themselves as relationship partners with hotel consumers. Moreover, brand relationships are changeable and fragile, and nearly all service failures could be responsible for diminishing or even destroying brand value. It would be interesting to examine whether BRQ has a certain influence on consumers who have formed relationships with a particular brand. Therefore, comparing the differences of post-failure responses between high BRQ consumers and low BRQ consumers can help us to understand whether BRQ as a model could moderate or magnify the negative influences of service failures on brand relationship. The purpose of this study is to examine the applicability of BRQ in the hotel industry, and especially to address the lack of research on the effects of BRQ on consumers through identifying causal attribution as a theoretical base to define service failures and applying it to empirical study. First, the study seeks to validate the applicability of the BRQ concept in a hotel setting through empirical investigation. Second, as empirical work to apply attribution theory in the hospitality and tourism industry remains limited, the findings of this study could provide a reference for hotel organizations in deciding whether BRQ should be a priority. It is also hoped that the findings will help hotel brands to manage service failure through developing an understanding of how affected consumers attribute service failure.

7.1. Contribution To contribute to knowledge regarding BRQ, this study provides a conceptual contribution to the field of hospitality and tourism through the validation of the applicability of the BRQ concept in the hotel context, within the realm of empirical investigation. Although the scale was originally developed in the context of a retail environment, the findings suggest that the scale appears to capture well the construct of BRQ in the hotel industry. Six sub-dimensions have been found to be unique and distinct from each other. The study also identifies causal attribution as a theoretical base on which to define service failure in the conceptual framework and applies it to the empirical study. However, the empirical evidence to apply attribution theory to the hospitality and tourism industry remains limited. The findings of this study could provide reference to the hotel industry to manage service failure, not only through leveraging their brand relationship but also, through understanding how the affected consumers attribute the service failures. 7.2. Implications From a managerial perspective, the findings of this study validate BRQ as a diagnostic tool that examines the depth and strength of the brand relationship. In addition, as the concept of BRQ is similar in spirit to the brand loyalty concept, it may provide a better alternative to loyalty in terms of conceptual richness over extant loyalty notions within the domain of process specification. The findings also provide compelling evidence that a hotel organizations’ relationship with hotel consumers could be an extremely important asset. For hotel consumers who are heavy brand users, the advantages of hotel organizations of investing in a positive brand relationship with consumers should be highly noted (Smit et al., 2007). Although BRQ was found to have a moderating effect on hotel consumers’ future behavioral intentions, hotel organizations are not encouraged to remain within the safety cushion of tolerance that is assumed through strong, trusting bonds (Aaker et al., 2004). Hotel organizations must be vigilant in identifying and correcting performance failures. In this study, hotel operators are encouraged to manage service failures through understanding how the affected consumers attribute service failures, regarded as the premise of good recovery. The results of this study suggest that hotel consumers’ negative emotions are influenced by their attribution, especially controllability attribution. This finding may remind hotel organizations to first understand the complex post-service failure behaviors of hotel consumers prior to carrying out any corresponding recovery strategies. Therefore, when service failures are likely to occur service organizations should be cautious about their causal effects. When hotel consumers consider a service failure to be out of a hotel's control, the hotel should put more effort into recovering from it. Moreover, hotel operators should pay more attention to high-BRQ consumers such as VIPs who are more likely to be repeat customers. 7.3. Limitations and future research While this study successfully answered its research questions, it is important to recognize its limitations. First, as with any research methodology, the scenario method design featured less consumer involvement than a real service encounter (Hess et al., 2003). The participants’ responses may thus be weaker than their responses to actual service failures. However, this limitation may be offset through careful design of the case. The advantages of the scenario method are that it eliminates practical difficulties through observation or enactment of service failure incidents in the field and avoids participants’ response bias (Mattila, 2004 and Smith et al., 1999). Future research is also encouraged to employ longitudinal measures in a real-life setting. In addition, this study only focuses on a single service failure context (i.e., check-in). Additional research could explore different service failures in terms of the importance of BRQ and consumers’ responses to service failures. Second, the study was limited by collecting data from four-star and five-star hotels in China. The findings, implications, and conclusions may not be generalizable to three or two-star hotels. Despite these restrictions, the rich store of data that was obtained helped to offset these limitations. The study covers state-owned hotel brands and private-owned hotel brands, international hotel brands, and domestic hotel brands. Hence, it reflects the high-end hotel market in China as closely as possible. Third, the study only investigated three cognitive and affective responses towards service failure. Empirical work to apply attribution theory in hospitality and tourism industries remains limited. Other related constructs are encouraged to provide practical implications for organizations following service failures. Fourth, the study treated the BRQ model as a second-order reflective model. Future studies could make reference to a more reflective and formative model.