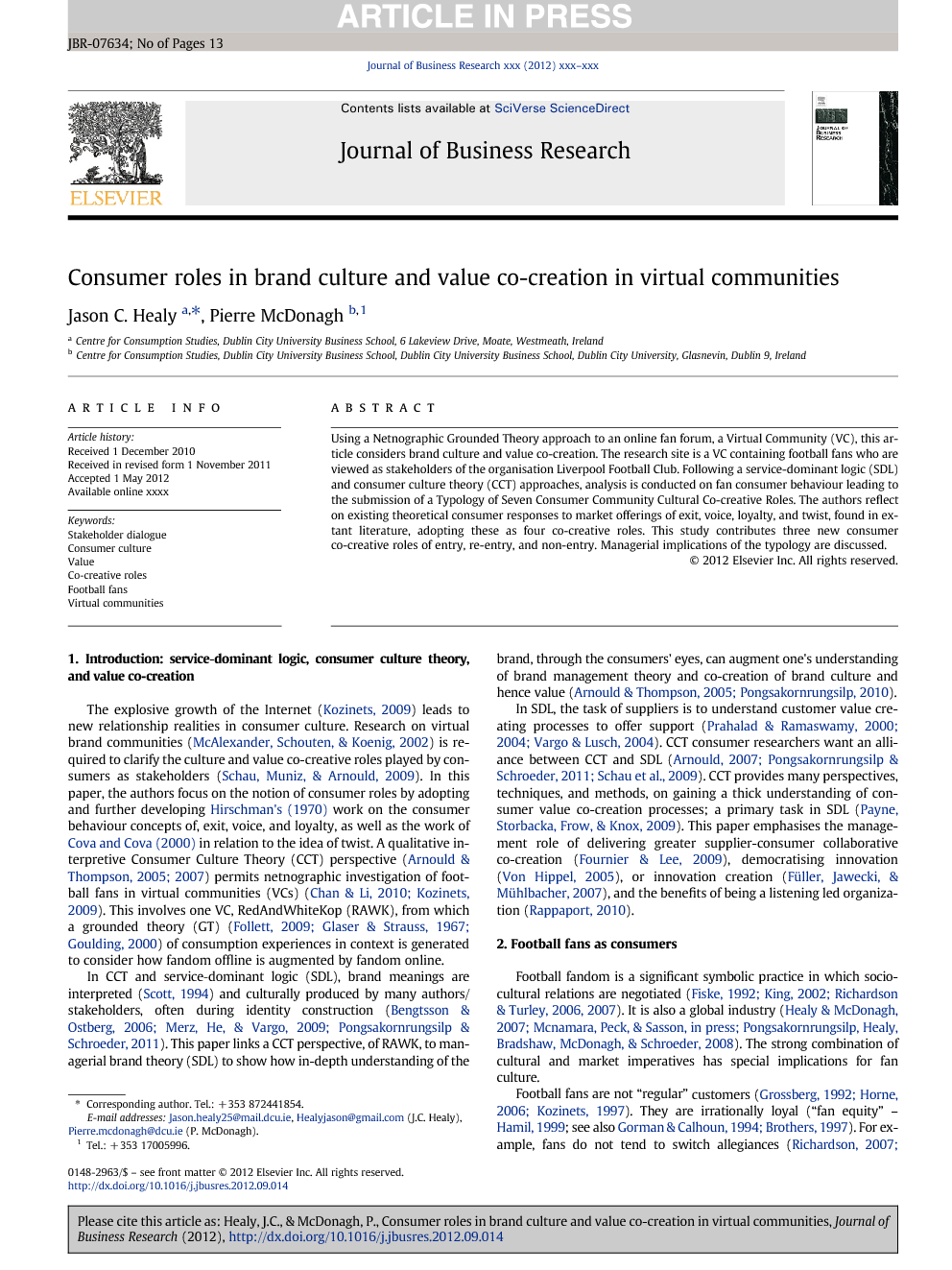 Using a Netnographic Grounded Theory approach to an online fan forum, a Virtual Community (VC), this article considers brand culture and value co-creation. The research site is a VC containing football fans who are viewed as stakeholders of the organisation Liverpool Football Club. Following a service-dominant logic (SDL) and consumer culture theory (CCT) approaches, analysis is conducted on fan consumer behaviour leading to the submission of a Typology of Seven Consumer Community Cultural Co-creative Roles. The authors reflect on existing theoretical consumer responses to market offerings of exit, voice, loyalty, and twist, found in extant literature, adopting these as four co-creative roles. This study contributes three new consumer co-creative roles of entry, re-entry, and non-entry. Managerial implications of the typology are discussed.

The explosive growth of the Internet (Kozinets, 2009) leads to new relationship realities in consumer culture. Research on virtual brand communities (McAlexander, Schouten, & Koenig, 2002) is required to clarify the culture and value co-creative roles played by consumers as stakeholders (Schau, Muniz, & Arnould, 2009). In this paper, the authors focus on the notion of consumer roles by adopting and further developing Hirschman's (1970) work on the consumer behaviour concepts of, exit, voice, and loyalty, as well as the work of Cova and Cova (2000) in relation to the idea of twist. A qualitative interpretive Consumer Culture Theory (CCT) perspective (Arnould and Thompson, 2005 and Arnould and Thompson, 2007) permits netnographic investigation of football fans in virtual communities (VCs) (Chan and Li, 2010 and Kozinets, 2009). This involves one VC, RedAndWhiteKop (RAWK), from which a grounded theory (GT) (Follett, 2009, Glaser and Strauss, 1967 and Goulding, 2000) of consumption experiences in context is generated to consider how fandom offline is augmented by fandom online. In CCT and service‐dominant logic (SDL), brand meanings are interpreted (Scott, 1994) and culturally produced by many authors/stakeholders, often during identity construction (Bengtsson and Ostberg, 2006, Merz et al., 2009 and Pongsakornrungsilp and Schroeder, 2011). This paper links a CCT perspective, of RAWK, to managerial brand theory (SDL) to show how in-depth understanding of the brand, through the consumers' eyes, can augment one's understanding of brand management theory and co-creation of brand culture and hence value (Arnould and Thompson, 2005 and Pongsakornrungsilp, 2010). In SDL, the task of suppliers is to understand customer value creating processes to offer support (Prahalad and Ramaswamy, 2000, Prahalad and Ramaswamy, 2004 and Vargo and Lusch, 2004). CCT consumer researchers want an alliance between CCT and SDL (Arnould, 2007, Pongsakornrungsilp and Schroeder, 2011 and Schau et al., 2009). CCT provides many perspectives, techniques, and methods, on gaining a thick understanding of consumer value co-creation processes; a primary task in SDL (Payne, Storbacka, Frow, & Knox, 2009). This paper emphasises the management role of delivering greater supplier-consumer collaborative co-creation (Fournier & Lee, 2009), democratising innovation (Von Hippel, 2005), or innovation creation (Füller, Jawecki, & Mühlbacher, 2007), and the benefits of being a listening led organization (Rappaport, 2010).

Fans on the VC RAWK engage these roles (how they consume) in pursuit of their consumption goals (why they consume). The roles overlap in many ways. For example, exit from the community is not a much used option given the strength of fan loyalty to their community identity. Thus, voice comes to the fore, as discussed by Hirschman (1970) and evidenced on RAWK. When LFC goals are incongruous with fan goals, or there is a growing expectation–experience gap, or negative emotion, fans on RAWK compensate for the lack of exit from the community. Fans buy the alternative protest jersey refusing to buy the official one (exit from the market). Yet, they still affirm loyalty to their community identity by appropriating and twisting many of the club's/community's (brand) symbols. This way fans satisfy the observation of Richardson and Turley (2006) and Richardson (2007) that being a fan is something that you do, not something that you buy. RAWK members are voicing their discontent through publicising the jersey's protest goals on RAWK and elsewhere. They are loyal to the community identity through display of traditional club symbols, like the Liver bird. They twist this symbolism too, twisting LFC's sponsor Standard Chartered. A primary task of both CCT and SDL is to understand how and why consumers consume. The Grounded Theory Online Ethnographic Process provides a tool to investigate the goals of consumers in context, and how they attempt to resolve these goals. Using this method, this paper provides an empirically grounded thick description of why and how fans on RAWK consume through explicating fan main concerns, abstracted consumer goals, and a role typology. The typology provides a theoretical lens that can be used by researchers to investigate consumption contexts that have emergent fit both online and offline. The roles provide insight into how fans co-author LFC brand culture. As such, management may also attempt to apply them in contexts with emergent fit.