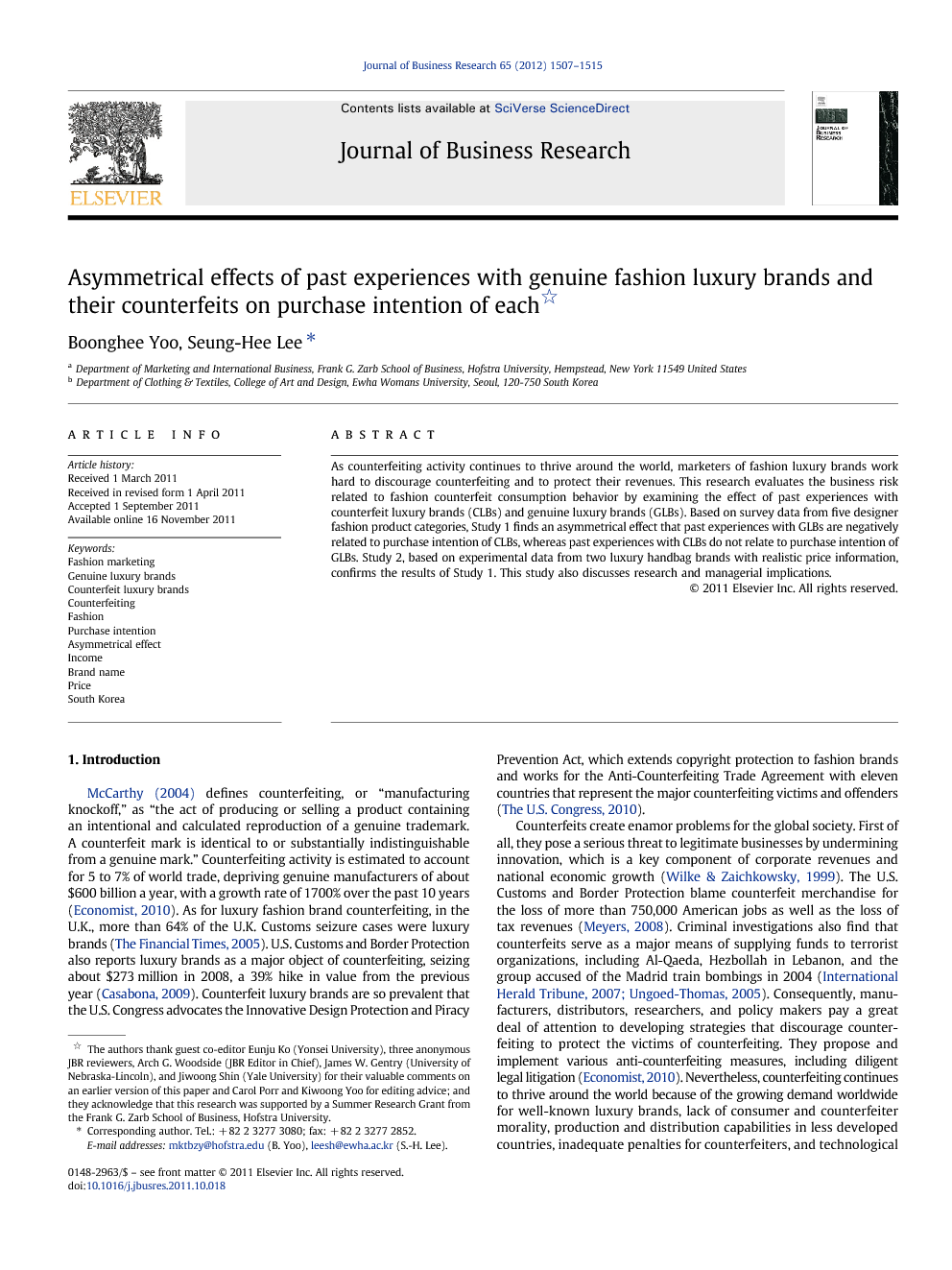 As counterfeiting activity continues to thrive around the world, marketers of fashion luxury brands work hard to discourage counterfeiting and to protect their revenues. This research evaluates the business risk related to fashion counterfeit consumption behavior by examining the effect of past experiences with counterfeit luxury brands (CLBs) and genuine luxury brands (GLBs). Based on survey data from five designer fashion product categories, Study 1 finds an asymmetrical effect that past experiences with GLBs are negatively related to purchase intention of CLBs, whereas past experiences with CLBs do not relate to purchase intention of GLBs. Study 2, based on experimental data from two luxury handbag brands with realistic price information, confirms the results of Study 1. This study also discusses research and managerial implications.

McCarthy (2004) defines counterfeiting, or “manufacturing knockoff,” as “the act of producing or selling a product containing an intentional and calculated reproduction of a genuine trademark. A counterfeit mark is identical to or substantially indistinguishable from a genuine mark.” Counterfeiting activity is estimated to account for 5 to 7% of world trade, depriving genuine manufacturers of about $600 billion a year, with a growth rate of 1700% over the past 10 years (Economist, 2010). As for luxury fashion brand counterfeiting, in the U.K., more than 64% of the U.K. Customs seizure cases were luxury brands (The Financial Times, 2005). U.S. Customs and Border Protection also reports luxury brands as a major object of counterfeiting, seizing about $273 million in 2008, a 39% hike in value from the previous year (Casabona, 2009). Counterfeit luxury brands are so prevalent that the U.S. Congress advocates the Innovative Design Protection and Piracy Prevention Act, which extends copyright protection to fashion brands and works for the Anti-Counterfeiting Trade Agreement with eleven countries that represent the major counterfeiting victims and offenders (The U.S. Congress, 2010). Counterfeits create enamor problems for the global society. First of all, they pose a serious threat to legitimate businesses by undermining innovation, which is a key component of corporate revenues and national economic growth (Wilke & Zaichkowsky, 1999). The U.S. Customs and Border Protection blame counterfeit merchandise for the loss of more than 750,000 American jobs as well as the loss of tax revenues (Meyers, 2008). Criminal investigations also find that counterfeits serve as a major means of supplying funds to terrorist organizations, including Al-Qaeda, Hezbollah in Lebanon, and the group accused of the Madrid train bombings in 2004 (International Herald Tribune, 2007 and Ungoed-Thomas, 2005). Consequently, manufacturers, distributors, researchers, and policy makers pay a great deal of attention to developing strategies that discourage counterfeiting to protect the victims of counterfeiting. They propose and implement various anti-counterfeiting measures, including diligent legal litigation (Economist, 2010). Nevertheless, counterfeiting continues to thrive around the world because of the growing demand worldwide for well-known luxury brands, lack of consumer and counterfeiter morality, production and distribution capabilities in less developed countries, inadequate penalties for counterfeiters, and technological advances enabling counterfeiting activities (Chaudhry, 2006, Green and Smith, 2002, Lee and Yoo, 2009, Olsen and Granzin, 1993 and Wee et al., 1995). While marketers of genuine luxury brands (hereafter called GLBs) struggle with their corresponding counterfeit luxury brands (hereafter called CLBs), ironically, in the software industry, counterfeits are known to benefit original brands. For example, Conner and Rumelt (1991) find that software piracy increases the number of program users; consequently, manufacturers object to software protection. Givon, Mahajan, and Muller (1995) also find that the sales of genuine word processors and spreadsheets in the U.K. significantly increase because of active word-of-mouth resulting from pirated items. Slive and Bernhardt (1998) insist that software manufacturers maximize their profit by tolerating piracy. Maltz and Chiappetta (2002) oppose eliminating software pirates because they can help firms identify useful innovative technologies. Haruvy, Mahajan, and Prasad (2004) demonstrate with real market data that piracy aids a full and fast market penetration of software. The photocopying of journal articles by users (Liebowitz, 1985) as well as illegal music file sharing (Peitz & Waelbroeck, 2006) also has similar findings. An important question that arises is whether, as observed in pirated software, inferior products (CLBs in our research) benefit quality products (GLBs) (McGinnis & Gentry, 2009). Obviously, marketers of GLBs must not agree, but little research has investigated the effect of CLBs on GLBs and vice versa. Therefore, the purpose of this research is to examine the effect of past experiences with CLBs (GLBs) on the purchase intent for GLBs (CLBs). The result will be a major contribution of this study to the literature. In the study, we narrowly define counterfeit consumers as consumers who are not deceived by counterfeiters, but knowingly purchase and consume CLBs. In fact, such nondeceived consumers of CLBs comprise the majority of such consumers; they are well aware of unlawful retail outlets selling CLBs, and such sellers also explicitly inform consumers that they are selling CLBs ( Gentry et al., 2001 and Grossman and Shapiro, 1988). In the following sections, we summarize the current research trend on CLBs, develop research hypotheses, and conduct two studies to test the hypotheses across luxury fashion product categories. Finally, we discuss the managerial and research implications of the findings.