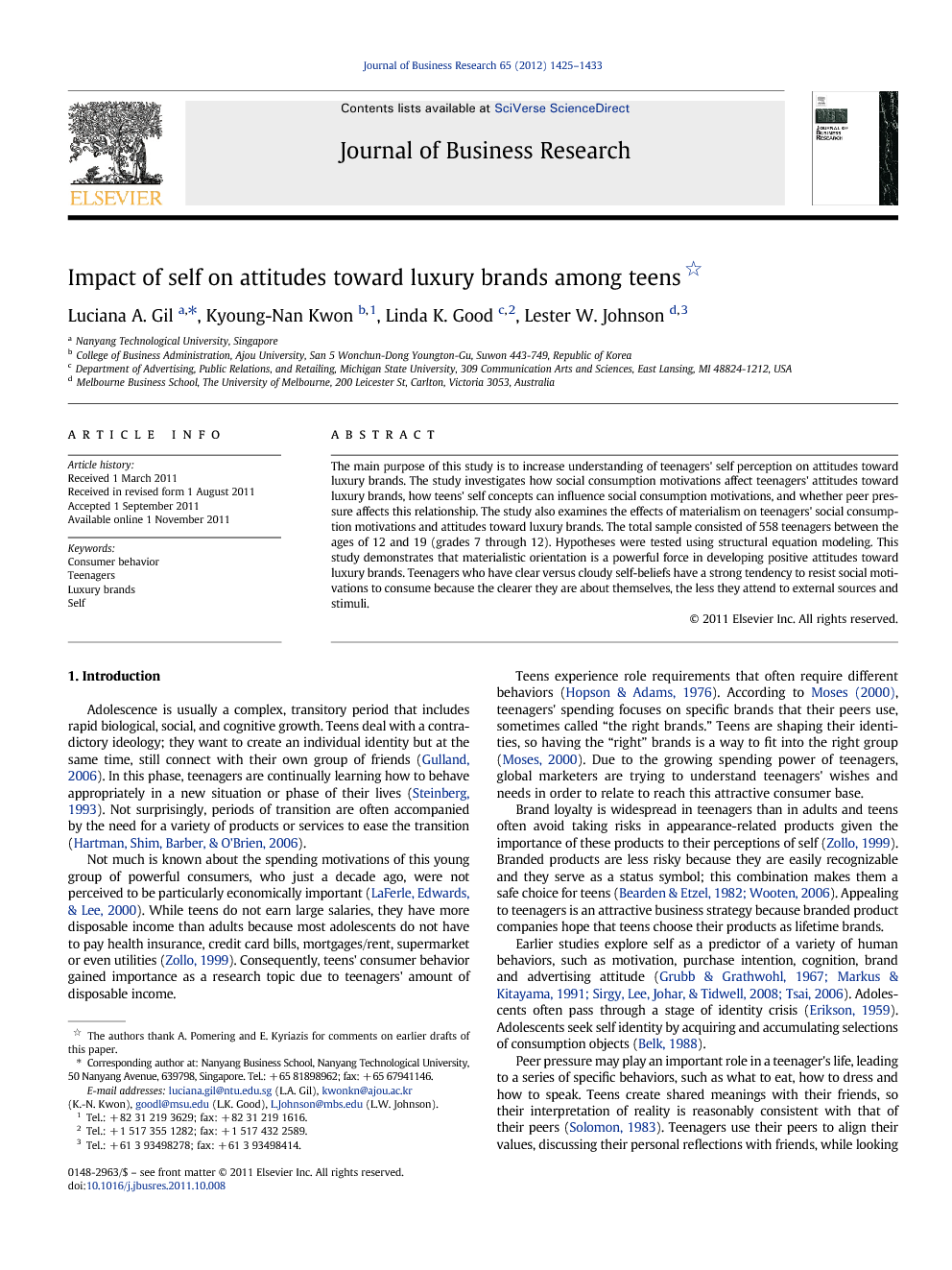 Adolescence is usually a complex, transitory period that includes rapid biological, social, and cognitive growth. Teens deal with a contradictory ideology; they want to create an individual identity but at the same time, still connect with their own group of friends (Gulland, 2006). In this phase, teenagers are continually learning how to behave appropriately in a new situation or phase of their lives (Steinberg, 1993). Not surprisingly, periods of transition are often accompanied by the need for a variety of products or services to ease the transition (Hartman, Shim, Barber, & O'Brien, 2006). Not much is known about the spending motivations of this young group of powerful consumers, who just a decade ago, were not perceived to be particularly economically important (LaFerle, Edwards, & Lee, 2000). While teens do not earn large salaries, they have more disposable income than adults because most adolescents do not have to pay health insurance, credit card bills, mortgages/rent, supermarket or even utilities (Zollo, 1999). Consequently, teens' consumer behavior gained importance as a research topic due to teenagers' amount of disposable income. Teens experience role requirements that often require different behaviors (Hopson & Adams, 1976). According to Moses (2000), teenagers' spending focuses on specific brands that their peers use, sometimes called “the right brands.” Teens are shaping their identities, so having the “right” brands is a way to fit into the right group (Moses, 2000). Due to the growing spending power of teenagers, global marketers are trying to understand teenagers' wishes and needs in order to relate to reach this attractive consumer base. Brand loyalty is widespread in teenagers than in adults and teens often avoid taking risks in appearance-related products given the importance of these products to their perceptions of self (Zollo, 1999). Branded products are less risky because they are easily recognizable and they serve as a status symbol; this combination makes them a safe choice for teens (Bearden and Etzel, 1982 and Wooten, 2006). Appealing to teenagers is an attractive business strategy because branded product companies hope that teens choose their products as lifetime brands. Earlier studies explore self as a predictor of a variety of human behaviors, such as motivation, purchase intention, cognition, brand and advertising attitude (Grubb and Grathwohl, 1967, Markus and Kitayama, 1991, Sirgy et al., 2008 and Tsai, 2006). Adolescents often pass through a stage of identity crisis (Erikson, 1959). Adolescents seek self identity by acquiring and accumulating selections of consumption objects (Belk, 1988). Peer pressure may play an important role in a teenager's life, leading to a series of specific behaviors, such as what to eat, how to dress and how to speak. Teens create shared meanings with their friends, so their interpretation of reality is reasonably consistent with that of their peers (Solomon, 1983). Teenagers use their peers to align their values, discussing their personal reflections with friends, while looking for support and mutual understanding (Youniss & Smollar, 1985). Therefore, consumer behavior research on teens should investigate the influence of peers. In seeking to explain how teens' view of themselves and how the impact of peer pressure affect interest in and attitudes toward luxury brands, consumers' social motivation and materialism are important factors in making purchasing decisions (Heaney, Goldsmith, & Jusoh, 2005). In addition, the level of materialism among adolescents is very high (Bristol and Mangleburg, 2005, Larsen et al., 1999 and Roedder-John, 1999). Given that consumers attempt to gain acceptance into social groups through the products that they purchase (Vigneron & Johnson, 2004), findings relating to materialism might explain why the luxury brand market has become increasingly important to teens. The study here investigates how perceptions of the self impact teens' attitudes toward luxury brands. Using a framework that represents a sum of interrelated fields such as consumer psychology, sociology and marketing, the objectives of this study are (1) to increase our understanding of teenagers' attitudes toward luxury brands, (2) to understand the impact of self on social consumption motivations among teenagers, (3) to investigate how peer pressure affects teenagers' consumption motivations, (4) to analyze how social consumption motivations affect teenagers' attitudes toward luxury brands, and (5) to examine how materialism influences teenagers' motivations and attitudes toward luxury brands.