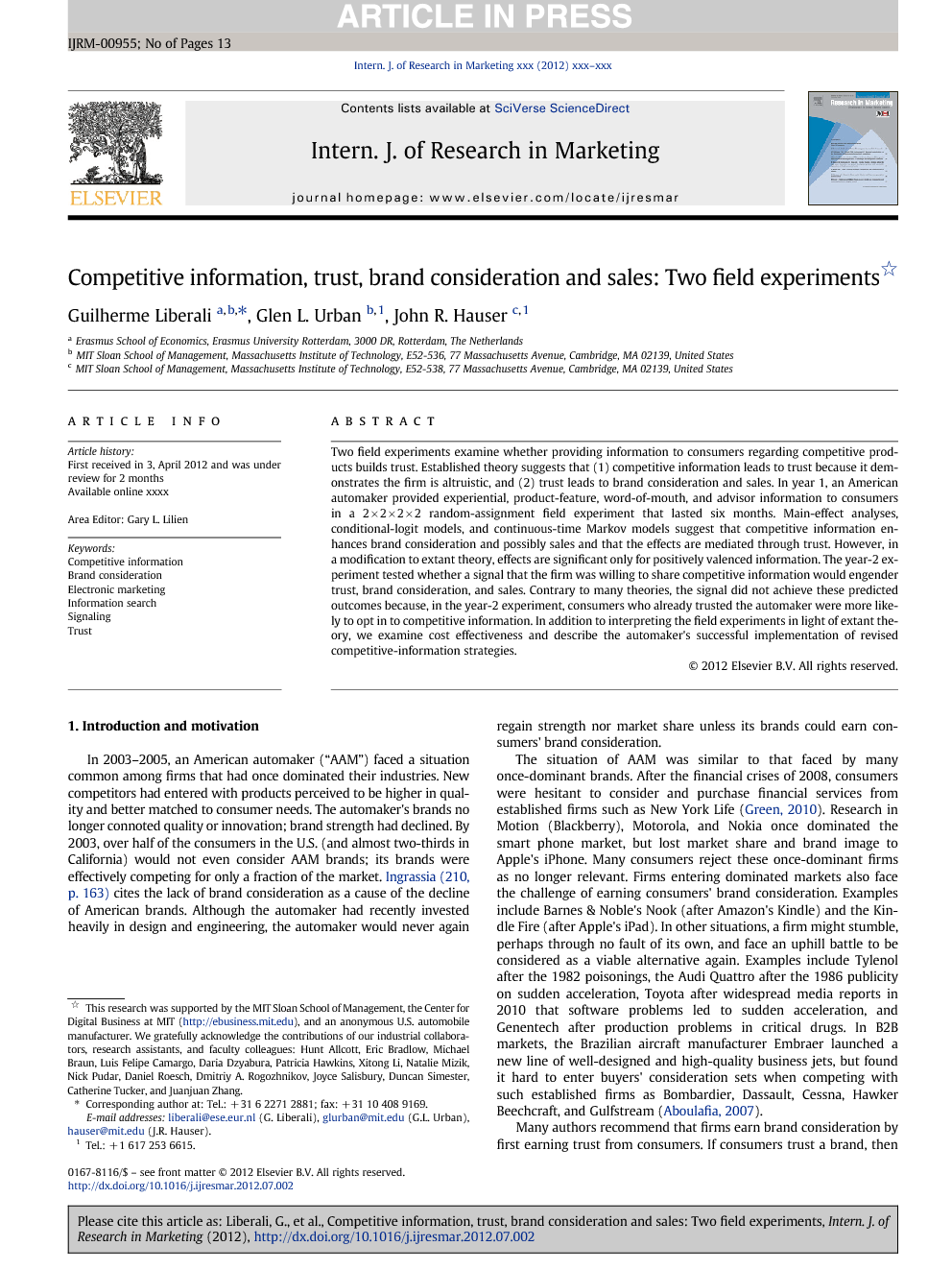 In 2003–2005, an American automaker (“AAM”) faced a situation common among firms that had once dominated their industries. New competitors had entered with products perceived to be higher in quality and better matched to consumer needs. The automaker's brands no longer connoted quality or innovation; brand strength had declined. By 2003, over half of the consumers in the U.S. (and almost two-thirds in California) would not even consider AAM brands; its brands were effectively competing for only a fraction of the market. Ingrassia (210, p. 163) cites the lack of brand consideration as a cause of the decline of American brands. Although the automaker had recently invested heavily in design and engineering, the automaker would never again regain strength nor market share unless its brands could earn consumers' brand consideration. The situation of AAM was similar to that faced by many once-dominant brands. After the financial crises of 2008, consumers were hesitant to consider and purchase financial services from established firms such as New York Life (Green, 2010). Research in Motion (Blackberry), Motorola, and Nokia once dominated the smart phone market, but lost market share and brand image to Apple's iPhone. Many consumers reject these once-dominant firms as no longer relevant. Firms entering dominated markets also face the challenge of earning consumers' brand consideration. Examples include Barnes & Noble's Nook (after Amazon's Kindle) and the Kindle Fire (after Apple's iPad). In other situations, a firm might stumble, perhaps through no fault of its own, and face an uphill battle to be considered as a viable alternative again. Examples include Tylenol after the 1982 poisonings, the Audi Quattro after the 1986 publicity on sudden acceleration, Toyota after widespread media reports in 2010 that software problems led to sudden acceleration, and Genentech after production problems in critical drugs. In B2B markets, the Brazilian aircraft manufacturer Embraer launched a new line of well-designed and high-quality business jets, but found it hard to enter buyers' consideration sets when competing with such established firms as Bombardier, Dassault, Cessna, Hawker Beechcraft, and Gulfstream (Aboulafia, 2007). Many authors recommend that firms earn brand consideration by first earning trust from consumers. If consumers trust a brand, then consumers are motivated to invest the time and effort to learn more about the features of the brands (see, e.g., Urban, 2005 and citations therein). Research suggests that to earn trust a firm should make itself vulnerable by acting altruistically and putting consumers' needs above its own (Kirmani and Rao, 2000, Moorman et al., 1993 and Rousseau et al., 1998). For example, New York Life stated publicly that “the guarantees we make last a lifetime” and that “our promises have no expiration date” (Green, 2010). Embraer, primarily a manufacturer of commercial regional jets, took a risky strategy of announcing a new line of jets specifically designed for business travel (Aboulafia, 2007). Even Procter & Gamble's Global Marketing Officer began new initiatives because “market share is trust materialized” (Bloom, 2007). The theory of making oneself vulnerable is persuasive, but for a major automaker, such a strategy puts billions of dollars at risk. Most evidence to date is based on cross-sectional surveys (structural equation models and meta-analyses) or laboratory experiments. For example, in a review of the literature, Geyskens, Steenkamp, and Kumar (1998) cite 20 studies based on surveys, seven based on laboratory experiments, and none based on field experiments. Even today, we find few field experiments and none in which a once-dominant firm made itself vulnerable to gain trust. Before committing to a trust-based strategy, AAM decided that the strategy had to be proven in rigorous field experiments. We were interested in partnering because we felt the need to field-test theories that were developed from surveys and laboratory experiments. Specifically, AAM would signal that it was acting in the consumers' best interests by providing unbiased competitive information to its customers. If the theories were correct, consumers would come to trust AAM and consider its brands. The vulnerability signal was risky because AAM would not win all head-to-head comparisons with its competitors and because goodwill was lacking among consumers familiar with pre-2003 products. However, if the theories were correct, competitive information would signal trust and have a positive impact. AAM's post-2003 products would win on sufficiently many comparisons that brand consideration would overcome losses due to adverse short-term comparisons. In this paper, we describe the field experiments and general lessons. The year-1 data suggest that competitive information leads to trust, brand consideration, and sales but that the effect of competitive information is mediated through trust. However, contrary to extant theory, these effects are significant only for positively valenced information. The year-2 data suggest that contrary to many theories, a signal alone, indicating that the firm is willing to share competitive information, does not engender trust, brand consideration, and sales. The signal was not effective because consumers who already trusted the automaker were more likely to opt in to competitive information. Managerial analyses suggest that competitive information is effective when targeted cost-effectively to consumers who are otherwise skeptical of the brand. We begin with the theory.

We now move from theory back to practice. Because the experiments established that some forms of competitive information engender trust and that trust leads to brand consideration, AAM ultimately implemented competitive-information strategies. The automaker first used the more general insights to refine competitive test drives. The following calculations illustrate the motivation behind managers' decisions at the time. We disguise the proprietary data with comparable publicly available data. For illustration, we assume a 15% market share. Based on this share, competitive test drives provide an 11.1% sales lift (year-1 data) with an approximate cost of $120 per participating consumer (with incentives). These calculations suggest that the cost of an incremental vehicle sale is approximately $7200. [$7207 = $120 / (0.15 ∗ 0.111).] Typical margins for the automotive industry are approximately 9%, and the average price of a new car is about $28,400 (Thomas & Cremer, 2010, http://www.ehow.com/facts_5977729_average-cost-new-car.html, visited July 2012). These public numbers suggest an incremental profit of approximately $2500 per vehicle sold, much less than the $7200 cost per vehicle sold based on a competitive test drive. Post-sales parts and other considerations are unlikely to make up the $4700 difference. As implemented in the year-1 randomized experiments, competitive test drives are not profitable. Large-scale competitive information strategies were put on hold during the distractions of the automotive and financial crises of 2005–2009. A multi-city competitive test-drive format was neither feasible nor cost-effective. Meanwhile, the concept of competitive test drives gained traction in situations where test drives could be implemented cost efficiently and targeted at skeptical consumers. When the financial situation improved, AAM tested competitive test drives for SUVs with a dealer in Arizona (automotive consumers often use agendas to screen on body-type; Hauser, 1986 and Urban et al., 2012). These competitive test drives proved to be cost-effective — approximately $100–200 per incremental sale. Costs were substantially lower because the test drives were from the dealer's lot (no need to rent a test track), because fewer vehicles were necessary (only SUVs), and because the dealer could borrow or rent vehicles from competitive dealers. On the benefit side, gross margins were higher than average for SUVs. AAM continued to experiment with competitive test drives in key local markets when high-value skeptical consumers could be targeted cost-effectively. In late 2010, the head of U.S. marketing for AAM launched a yearlong series of weekend competitive test drives at dealerships. Each event invited a few thousand potential buyers to compare AAM vehicles with competitive vehicles. Year 2 taught managers that they needed to do more than signal that competitive information was available. Communication strategies should be targeted at consumers who do not already trust the automaker. Managers now place a premium on targeting competitive information toward skeptical consumers. New methods include interactive screening to identify consumers who answer questions that indicate they do not trust AAM. Targeted consumers would receive substantial incentives to participate in competitive-information treatments. Based on the 2003–2005 data and managerial judgment, managers believe that providing competitive information is effective when there is good news and when it is cost effective. As of this writing, AAM includes key competitive comparisons on its website using standardized Polk data on prices, specifications, and equipment for preselected competitive and consumer-specified vehicles. In 2009, AAM used a national advertising campaign that encouraged consumers to compare AAM vehicles with those of competitors regarding fuel economy and styling. Many AAM dealers offer unsolicited extended weekend test drives and encourage competitive comparisons. AAM believes that competitive information builds trust, brand consideration, and sales and is profitable only if implemented cost-effectively to skeptical consumers for categories in which AAM has good vehicles relative to competitors. This more nuanced trust-based strategy is believed to be more profitable than a general strategy of trust signaling.