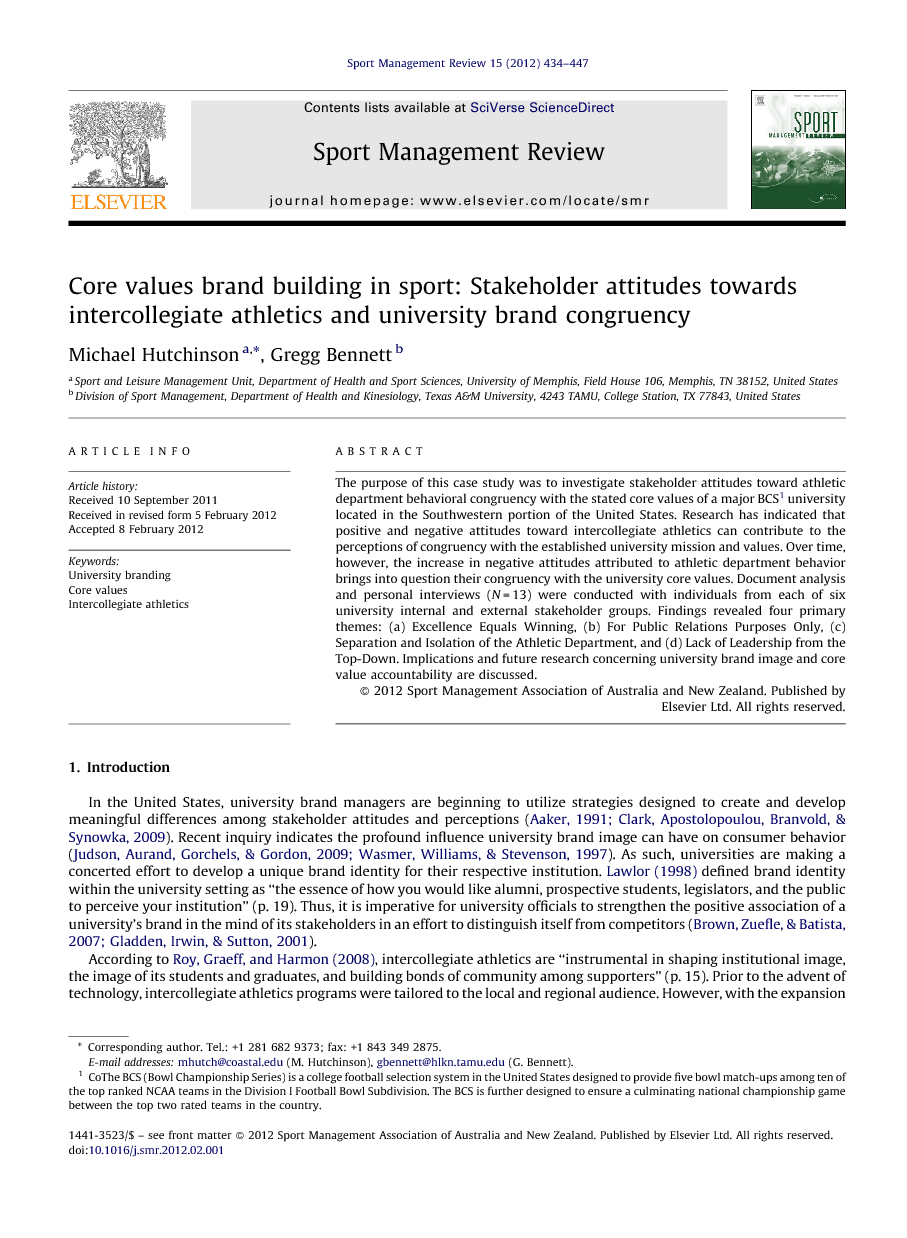 The purpose of this case study was to investigate stakeholder attitudes toward athletic department behavioral congruency with the stated core values of a major BCS1 university located in the Southwestern portion of the United States. Research has indicated that positive and negative attitudes toward intercollegiate athletics can contribute to the perceptions of congruency with the established university mission and values. Over time, however, the increase in negative attitudes attributed to athletic department behavior brings into question their congruency with the university core values. Document analysis and personal interviews (N = 13) were conducted with individuals from each of six university internal and external stakeholder groups. Findings revealed four primary themes: (a) Excellence Equals Winning, (b) For Public Relations Purposes Only, (c) Separation and Isolation of the Athletic Department, and (d) Lack of Leadership from the Top-Down. Implications and future research concerning university brand image and core value accountability are discussed.

In the United States, university brand managers are beginning to utilize strategies designed to create and develop meaningful differences among stakeholder attitudes and perceptions (Aaker, 1991 and Clark et al., 2009). Recent inquiry indicates the profound influence university brand image can have on consumer behavior (Judson et al., 2009 and Wasmer et al., 1997). As such, universities are making a concerted effort to develop a unique brand identity for their respective institution. Lawlor (1998) defined brand identity within the university setting as “the essence of how you would like alumni, prospective students, legislators, and the public to perceive your institution” (p. 19). Thus, it is imperative for university officials to strengthen the positive association of a university's brand in the mind of its stakeholders in an effort to distinguish itself from competitors (Brown et al., 2007 and Gladden et al., 2001). According to Roy, Graeff, and Harmon (2008), intercollegiate athletics are “instrumental in shaping institutional image, the image of its students and graduates, and building bonds of community among supporters” (p. 15). Prior to the advent of technology, intercollegiate athletics programs were tailored to the local and regional audience. However, with the expansion of broadcasting mediums, intercollegiate athletics have progressively transitioned from a regional-based activity to a form of national entertainment (Sperber, 2000). This increased media exposure has drawn attention to the importance of positioning the university brand in the mind of stakeholders and consumers, thus challenging administrators to consider the desired brand image of both the university and the athletic department. Since the athletic department often serves as one of the most visible operating units on campus, branding initiatives become an important component for the subsequent image of the overall university (Putler & Wolfe, 1999). According to marketing scholars, the formation of a brand must begin with the establishment and objectification of the university mission and core values (Moser, 2003). As such, subsequent branding strategies are expected to be aligned and congruent with the university brand mission in order to achieve effectiveness (Chapleo, 2005 and Clark et al., 2009). Hence, the creation and development of such branding strategies includes the establishment, objectification, and articulation of core values within university marketing initiatives (Moser, 2003). As an element of building and maintaining the desired brand image, core values have emerged as fundamental characteristics that define the brand of an organization (Moser, 2003 and Urde, 2003). Core values have been described as the guiding principles and beacons for the brand building process (Lencioni, 2002 and Urde, 2003), while also providing an avenue for differentiation among other industry competitors (Balmer and Gray, 2003 and Urde, 2009). Yet, the establishment of such core values is intended to be met with commitment and consistency, as a failure to do so will disillusion stakeholders and potentially deplete the credibility of an organization's brand (Collins and Porras, 1996, Ind, 2007 and Sull and Spinosa, 2007). Intercollegiate athletics has not always been viewed as a consistent beacon for promoting and implementing all established or promoted values of a university (Knorr, 2004). As intercollegiate athletics have increased in popularity and media coverage, conflicting viewpoints regarding the positive or negative effects imparted to higher education institutions have been raised (e.g., Adler and Adler, 1991 and Gerdy, 1997). At its most extreme, intercollegiate athletics programs have been characterized as the “antithesis of academic values” (Knorr, 2004, p. 18). Perceptions of intercollegiate athletics programs and their behavior vary significantly among university stakeholders and the general public (Putler & Wolfe, 1999). Although athletic programs have the potential to generate positive qualities such as alumni contributions and financially lucrative programs, several behaviors have contributed to negative perceptions, including low graduation rates, off-the-field violence, and financial dependency upon the university (Putler & Wolfe, 1999). According to Sevier (2001), athletic department behaviors can actually act as a brand usurper in the development and implementation of the overall university branding strategy. Accordingly, these behaviors can have a direct effect on how the university would like stakeholders to view the brand (Johnson et al., 2009 and Lawlor, 1998). With particular relevance to this investigation, research has indicated that attitudes toward intercollegiate athletics can contribute to the perceptions of congruency, or incongruency, with the established university mission and values (Putler & Wolfe, 1999). The potential existence of incompatibility and misalignment among internal constituents concerning core values has been linked to the starting point for conflicts within the organizational setting (Barrett, 2006). As such, attitudes toward athletic department behavioral congruency with stated university core values is worthy of investigation in order to determine the consequential impact on the university brand. With a long standing history dedicated to emphasizing and enacting their core values, Southwestern State University serves as an ideal context in which to conduct this investigation. Since its inception in the late nineteenth century, Southwestern State University has established six core values in an attempt to display such characteristics throughout all branches of the institution: Excellence, Integrity, Leadership, Loyalty, Respect, and Selfless Service. As a university devoted to its stated core values, the established Southwestern State brand promise is unequivocal in its purpose: “to model our core values in all that we do” (Southwestern State University, 2011a). However, there is a paucity of original research investigating the behavioral congruency of an organization with its stated core values. Further, research investigating stakeholder attitudes of athletic department behavioral congruency with its established university core values is absent from the literature. The purpose of this study was to investigate stakeholder attitudes toward athletic department behavioral congruency with the stated core values of Southwestern State University. As an institution of higher learning with a rich history of devotion to core values, Southwestern State University served as an excellent case to explore such initiatives. This study adhered to a single instrumental exploratory case study design by focusing on a single issue and subsequently selecting a case as a means of illustration (Creswell et al., 2007 and Stake, 1995).

This study set out to investigate stakeholder attitudes toward the athletic department's behavioral congruency with the stated core values of Southwestern State University. The findings made a contribution to the literature on the perceived lack of congruency between athletic department behavior and institutional core values among stakeholders. Implications provided a unique perspective on the potential for separate academic and athletic brand images. Further, the necessity of increased core value advertisement and ownership for brand insulation purposes was discussed.