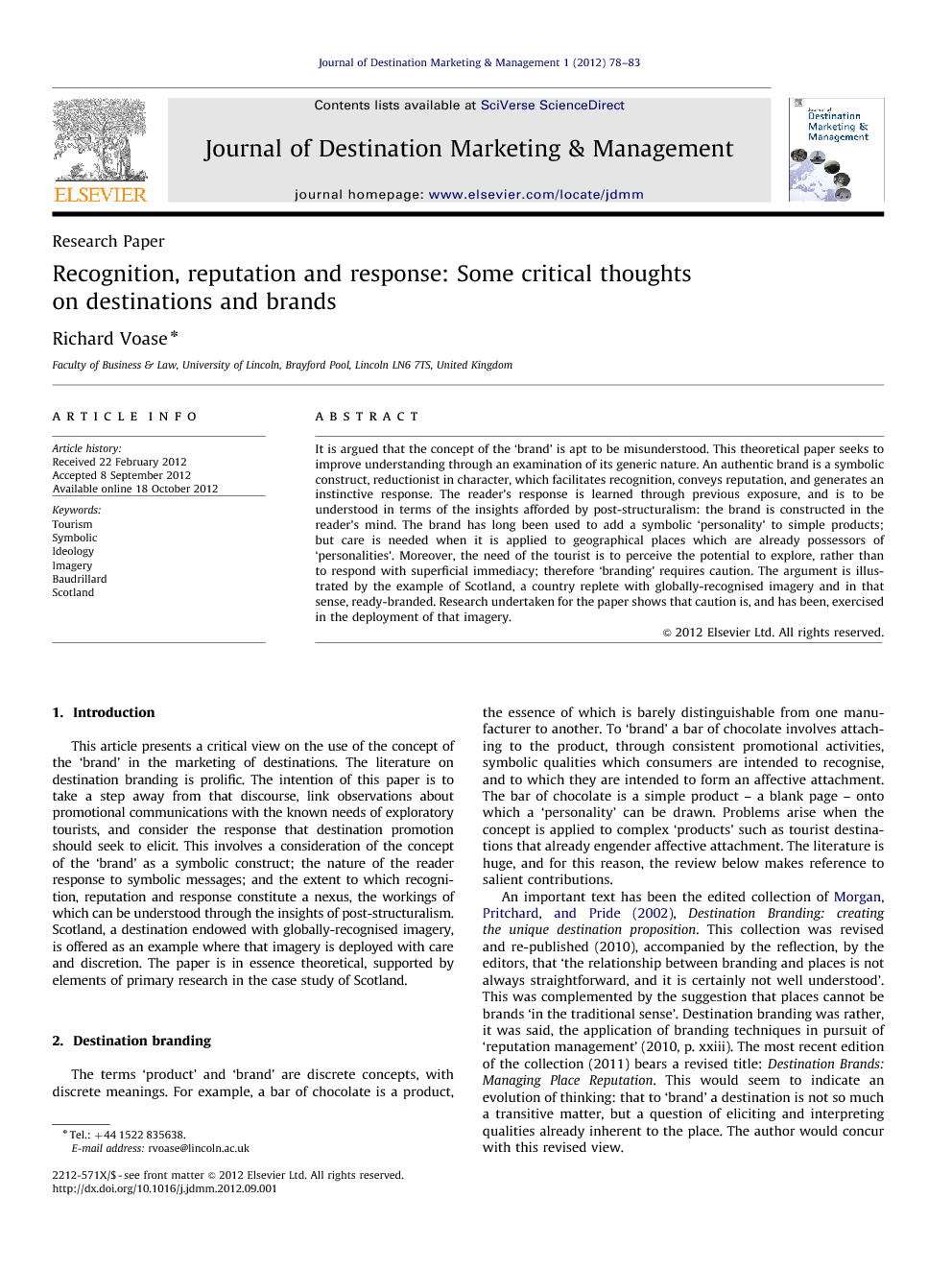 It is argued that the concept of the ‘brand’ is apt to be misunderstood. This theoretical paper seeks to improve understanding through an examination of its generic nature. An authentic brand is a symbolic construct, reductionist in character, which facilitates recognition, conveys reputation, and generates an instinctive response. The reader’s response is learned through previous exposure, and is to be understood in terms of the insights afforded by post-structuralism: the brand is constructed in the reader’s mind. The brand has long been used to add a symbolic ‘personality’ to simple products; but care is needed when it is applied to geographical places which are already possessors of ‘personalities’. Moreover, the need of the tourist is to perceive the potential to explore, rather than to respond with superficial immediacy; therefore ‘branding’ requires caution. The argument is illustrated by the example of Scotland, a country replete with globally-recognised imagery and in that sense, ready-branded. Research undertaken for the paper shows that caution is, and has been, exercised in the deployment of that imagery.

This article presents a critical view on the use of the concept of the ‘brand’ in the marketing of destinations. The literature on destination branding is prolific. The intention of this paper is to take a step away from that discourse, link observations about promotional communications with the known needs of exploratory tourists, and consider the response that destination promotion should seek to elicit. This involves a consideration of the concept of the ‘brand’ as a symbolic construct; the nature of the reader response to symbolic messages; and the extent to which recognition, reputation and response constitute a nexus, the workings of which can be understood through the insights of post-structuralism. Scotland, a destination endowed with globally-recognised imagery, is offered as an example where that imagery is deployed with care and discretion. The paper is in essence theoretical, supported by elements of primary research in the case study of Scotland.

Familiarity, it is said, breeds contempt (Twain, 1935). It is also said that there is only one thing worse than being talked about, and that is not being talked about (Wilde, 1891). Therefore, if places are possessors of personalities, and have, like personalities, reputations, then the task of ‘reputation management’ – the term favoured by Morgan et al., 2010 and Morgan et al., 2011 – needs to reconcile the need for recognition with the need to generate interest. Over-exposure breeds indifference. Warhol (1968) observed, with prescience, that ‘In the future, everybody will be world-famous for fifteen minutes’ (1968). A back-catalogue of forgotten celebrities is testimony to this. Those whose fame endures are endowed with evolving talent, limit their exposure through reticence, re-invent themselves continually, or die young. As it is with people, so it is with places. The principal purpose of the ‘brand’ is recognition; its salient characteristic is to be reductionist. The brand, like any other symbol, seeks to command attention without engaging the reflective mind: the reader response is intended to be immediate and unconscious, a ‘short-cut’. This occlusion of the real works handsomely, when it works properly; and its proper working is in large measure dependent on ephemerality of encounter. Once the consumer’s attention is diverted from essence to abstraction, the purchase decision is determined not by value, but by association. It is this property that allows manufacturers to charge a premium price for products such as cola drinks whose ordinariness, when shorn of their brand value, becomes transparent. Potential problems arise when attempts are made to ‘brand’ tourist destinations. First, such attempts may not be branding at all but simply, and harmlessly, promotional campaigns without any intention to generate symbolic value: image-building by a different name. Second, authentic branding can work against the interests of the destination, because its reductionist nature occludes the potential for engaging the mind of the reader. The insights of post-structuralism reveal that meaning is authored in the mind. It is known that exploratory tourists seek experiential authenticity. The evidence assembled in respect of Scotland shows how that country’s destination marketing organization has learned to deploy its brand assets – its familiar imagery – with discretion. This paper has sought to address misunderstandings about what brands are, and how they work. It has sought to accomplish this through a detailed examination of the generic nature of the brand, how it commands recognition, conveys reputation, and elicits a response from those who encounter it. Recognition, if unlinked with evolving reputation, can be a burden. The author recalls, during a practitioner career at the English seaside, uphill struggles to persuade film crews to resist the default option for the closing scene of a television feature: the presenter eating fish and chips astride a donkey. To conform to ephemerality is to achieve recognition, and little more: a visual cliché that assumes no response (Dann, 2001, p. 3). Recognition is just one part of the nexus; the symbolic link to reputation, and intended response, require thought and care. As my correspondent, acknowledged below, put it elegantly and understatedly, it is a question of a ‘link to delivery’. That provides a cue for three actionable suggestions. First, this author would commend a secure understanding of the discrete natures of recognition, reputation and response, and the incorporation of this understanding into planning approaches. Second, we can remind ourselves that brands are agents of seduction; and that to be seduced by one’s own brand, or by the idea of brands in general, is an endemic occupational hazard. A year or two ago, the author attended a one-day conference organized by the British Chartered Institute of Marketing. At the afternoon plenary session, the author suggested to the six speakers on the platform that the term ‘brand’ had been used far too loosely. Six heads nodded in agreement. Words do not gain meaning with repetition: on the contrary, they lose it. Third, we can keep our eyes on the proverbial ball, and remember that exploratory tourists are apt to eschew the familiar, and to seek out the novel, the hidden, and the authentic. To quote my correspondent again, the promotional objective for a destination such as Scotland is the promise of an enriching experience: to ‘understand what Scotland truly means’.