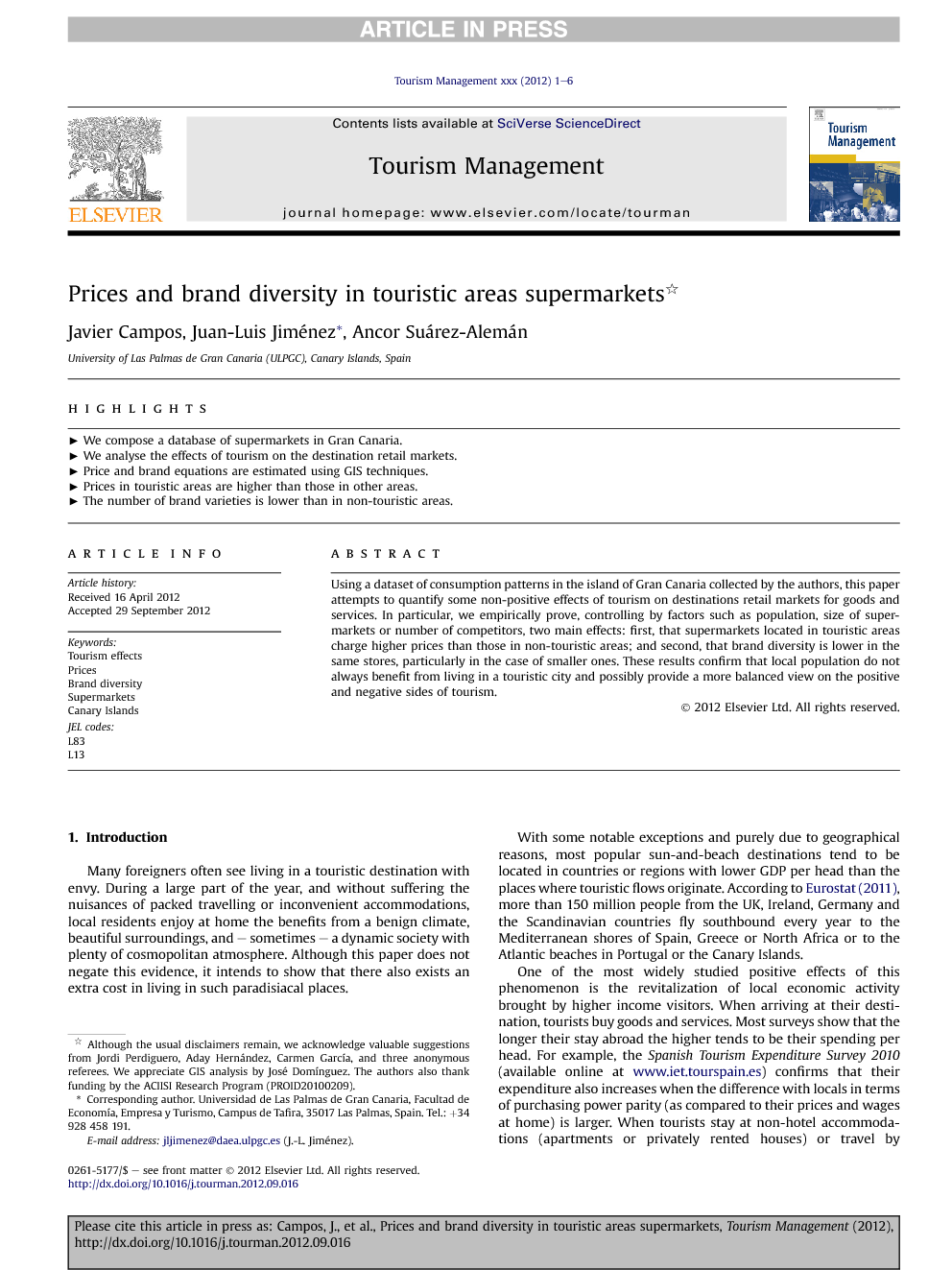 Using a dataset of consumption patterns in the island of Gran Canaria collected by the authors, this paper attempts to quantify some non-positive effects of tourism on destinations retail markets for goods and services. In particular, we empirically prove, controlling by factors such as population, size of supermarkets or number of competitors, two main effects: first, that supermarkets located in touristic areas charge higher prices than those in non-touristic areas; and second, that brand diversity is lower in the same stores, particularly in the case of smaller ones. These results confirm that local population do not always benefit from living in a touristic city and possibly provide a more balanced view on the positive and negative sides of tourism.

Many foreigners often see living in a touristic destination with envy. During a large part of the year, and without suffering the nuisances of packed travelling or inconvenient accommodations, local residents enjoy at home the benefits from a benign climate, beautiful surroundings, and – sometimes – a dynamic society with plenty of cosmopolitan atmosphere. Although this paper does not negate this evidence, it intends to show that there also exists an extra cost in living in such paradisiacal places. With some notable exceptions and purely due to geographical reasons, most popular sun-and-beach destinations tend to be located in countries or regions with lower GDP per head than the places where touristic flows originate. According to Eurostat (2011), more than 150 million people from the UK, Ireland, Germany and the Scandinavian countries fly southbound every year to the Mediterranean shores of Spain, Greece or North Africa or to the Atlantic beaches in Portugal or the Canary Islands. One of the most widely studied positive effects of this phenomenon is the revitalization of local economic activity brought by higher income visitors. When arriving at their destination, tourists buy goods and services. Most surveys show that the longer their stay abroad the higher tends to be their spending per head. For example, the Spanish Tourism Expenditure Survey 2010 (available online at www.iet.tourspain.es) confirms that their expenditure also increases when the difference with locals in terms of purchasing power parity (as compared to their prices and wages at home) is larger. When tourists stay at non-hotel accommodations (apartments or privately rented houses) or travel by themselves (instead of booking holidays packages or all-inclusive programs) their spending at local stores is generally larger and more frequent. Of course, managers and local retailers see this wealthier demand segment as an opportunity to make profits. Although some goods and services providers (crafts or souvenirs sellers, touristic restaurants and bars, etc.) may decide to specialize on this particular clientele, others (groceries, supermarkets, bookshops, etc.) will sell both to tourists and locals and, since price discrimination seems unfair (and barely legal), it can be expected that (large) tourism inflows on certain destination areas will induce – as a result of a simple income effect – higher (average) prices in most typical consumption baskets. However, price is not the only decision variable that consumers care about. In horizontally differentiated markets most retailers offer a number of brand varieties for the same product in order to attract consumers with different tastes or preferences. Product differentiation is then supported with the help of advertising (either in place or via the media), attractive packaging or specific promotion policies and discounts. But all these resources have a weaker effect on tourists, whose command of local language is limited. Therefore, and particularly in smaller shops – where selling space is more valuable – we can expect that brand diversity in stores of touristic areas will be lower than in non-touristic ones.1 Are these expected negative effects relevant enough? Should they be included in any balanced review on the effects of tourism from now on? After a review of the related literature in Section 2, this paper addresses these two questions from an empirical viewpoint by providing evidence from a 2010 Canary Islands panel dataset. The example of the Canary Islands seems particularly appropriate to test the claims made in this paper because this archipelago, located 1500 km southwest of mainland Spain, receives regularly every year more than 12 million European visitors, whereas the local population is about 2.1 million. On average, the ratio visitors/locals is above 6, although in some touristic municipalities these figures are closer to 10–12 (ISTAC, 2010). As explained in Section 3, our source includes very detailed information on prices and brand varieties for a wide subset of commodities in a representative sample of all the supermarkets of the island of Gran Canaria. An additional relevant feature of our data is that stores have been exactly located using GIS techniques, which allows a precise (but flexible) definition of geographic markets in connection with the influence areas of touristic flows. We then estimate in Section 4, several price and brand variety equations in order to test the impact of tourism on each supermarket according to its location (or not) within a touristic municipality. We control by the size of the local market, the size of the stores and the existence (or not) of nearby competitors. By using clustering techniques that take into account potential differences in variance among municipalities, we finally produce estimates that confirm our expected results, which are analysed and discussed in Section 5.

The thesis discussed in this paper is that in areas where tourism inflows outnumber or represent a large proportion as compared to local inhabitants the functioning of the markets for goods and services may be affected by tourists' consumption patterns. In particular we argue that prices and brand varieties found in supermarkets of touristic areas are significantly different from those found in their counterparts outside these areas. Using a representative dataset from supermarkets in the island of Gran Canaria, our estimations of different price and brand variety equations seem to confirm the thesis that prices at touristic municipalities are higher (by 20.4% on average) and the number of varieties is smaller (by 36.9% on average) when compared to non-touristic municipalities in the same island, once other factors that might explain these differences are controlled for. The reason that explains the first result is a simple income effect, whereas the second one lies in the fact that touristic supermarkets do not benefit from offering a wide range of brands to customers (tourists) who do not appreciate the differences due to the lack of local language skills. Arguably, these effects are not only negative. The upward shift in the demand curve does not only increase prices but also quantities (and, indirectly, the level of economic activity, including real income and employment) at the host community. This effect will be higher the more elastic the supply curve. In any case, the point in discussing these two effects of tourism on local markets' prices and brand diversity is not to question whether they exist or not, but to what extent are they relevant as compared to other – more widely studied – impacts of tourism (both positive and negative). We think that only by attempting to provide actual estimates, a more balanced cost-benefit of the most relevant consequences of tourism can be performed, and the microeconomic policies in local retail markets – on competition, entry, opening hours, and so on – should take into account the differentiated characteristics of touristic areas.