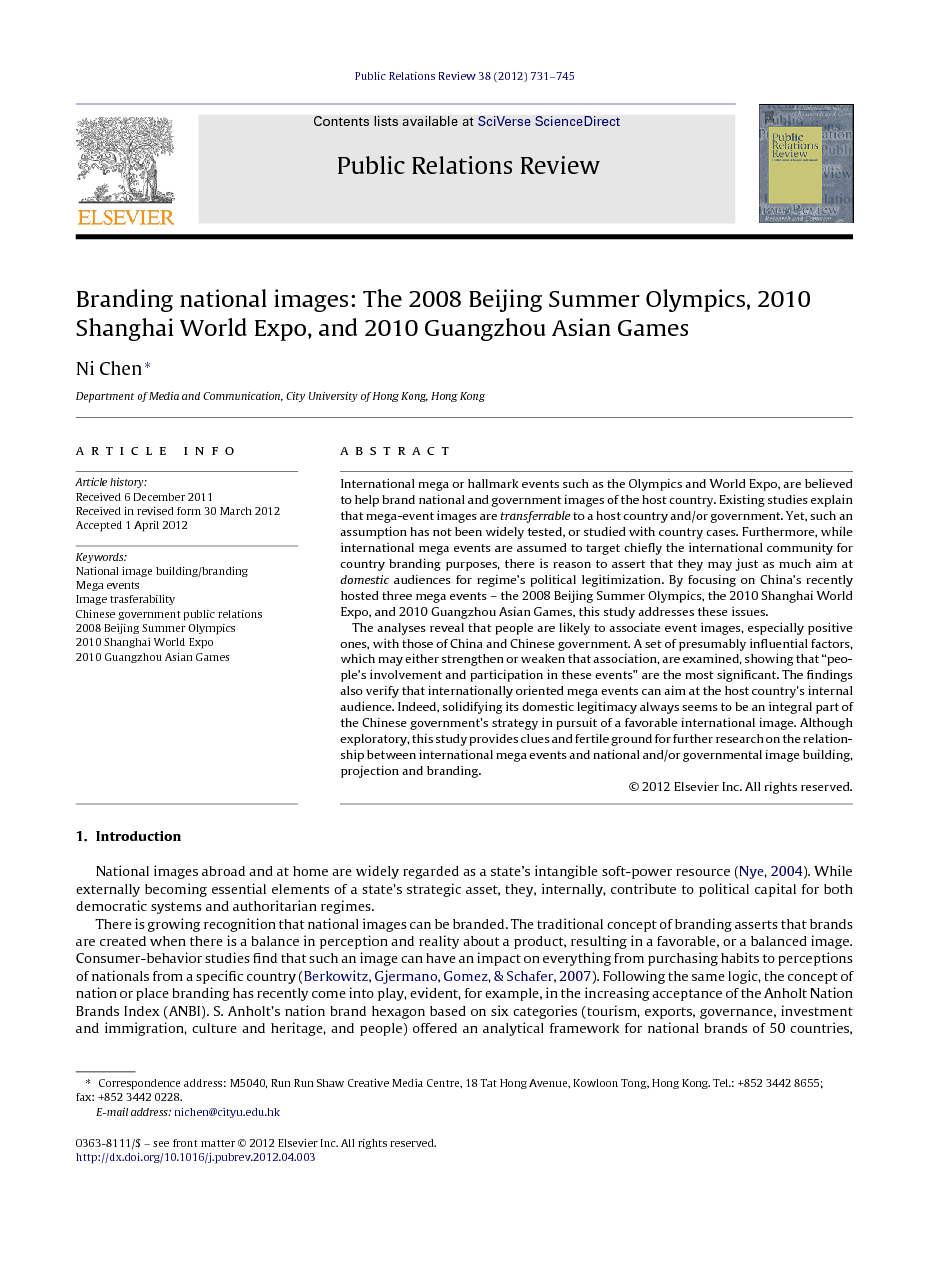 International mega or hallmark events such as the Olympics and World Expo, are believed to help brand national and government images of the host country. Existing studies explain that mega-event images are transferrable to a host country and/or government. Yet, such an assumption has not been widely tested, or studied with country cases. Furthermore, while international mega events are assumed to target chiefly the international community for country branding purposes, there is reason to assert that they may just as much aim at domestic audiences for regime's political legitimization. By focusing on China's recently hosted three mega events – the 2008 Beijing Summer Olympics, the 2010 Shanghai World Expo, and 2010 Guangzhou Asian Games, this study addresses these issues. The analyses reveal that people are likely to associate event images, especially positive ones, with those of China and Chinese government. A set of presumably influential factors, which may either strengthen or weaken that association, are examined, showing that “people's involvement and participation in these events” are the most significant. The findings also verify that internationally oriented mega events can aim at the host country's internal audience. Indeed, solidifying its domestic legitimacy always seems to be an integral part of the Chinese government's strategy in pursuit of a favorable international image. Although exploratory, this study provides clues and fertile ground for further research on the relationship between international mega events and national and/or governmental image building, projection and branding.

National images abroad and at home are widely regarded as a state's intangible soft-power resource (Nye, 2004). While externally becoming essential elements of a state's strategic asset, they, internally, contribute to political capital for both democratic systems and authoritarian regimes. There is growing recognition that national images can be branded. The traditional concept of branding asserts that brands are created when there is a balance in perception and reality about a product, resulting in a favorable, or a balanced image. Consumer-behavior studies find that such an image can have an impact on everything from purchasing habits to perceptions of nationals from a specific country (Berkowitz, Gjermano, Gomez, & Schafer, 2007). Following the same logic, the concept of nation or place branding has recently come into play, evident, for example, in the increasing acceptance of the Anholt Nation Brands Index (ANBI). S. Anholt's nation brand hexagon based on six categories (tourism, exports, governance, investment and immigration, culture and heritage, and people) offered an analytical framework for national brands of 50 countries, developed and developing ones alike, in 2009 (GfK Group, 2009). To brand national images is believed to gain a favorable image of at least the three major stakeholders of a country: its people, society and certainly government (including its institutions). Here, it is implied that the branding of government image is an integral part of the branding of national image. International mega or hallmark events, either sports tournaments such as the Olympics, or cultural and trade shows like the World Expo, can facilitate country's image branding. The term “mega-event” characterizes “large events of world importance and high profile which have a major impact” on the hosting country or place (Law, 1993). In explaining why a growing number of countries show interest in hosting such events despite the high costs and complexity of the bidding process and actual event hosting, several studies have identified economic growth, infrastructure upgrading, and image promotion as chief benefits to hosting countries (Kim et al., 2010, Kim and Petrick, 2005 and Matos, 2006). Such events are not only pleasurable in themselves but attractive to money-spending visitors who are likely to forge positive images about places rich in culture, spirit and value (Horne and Manzenreiter, 2006 and Therkelsen, 2003). Recently, China hosted three such mega events: the Beijing Summer Olympics in August 2008, the Shanghai World Expo in May–October 2010, and the Guangzhou Asian Games in November 2010. Still an authoritarian system, the Chinese government fought vigorously in bidding for the permits to host these events and worked hard in organizing them. With enormous resources invested, the government believed that every penny spent was worthy, particularly as a necessary expenditure for public diplomacy. Along with new opportunities for urban development, Chinese officials have claimed that the images of China's three largest cities are branded nationally and internationally, and so is the image of the Chinese government via hosting these three mega events (Hong, 2010 and Zhang, 2010). While many try to characterize the actual impact of the mega events on the country's image abroad (Berkowitz et al., 2007, Lamberti et al., 2011 and Wang, 2010), some find that the branding of the Chinese government has achieved only limited results (Rabinovitch, 2008). Whether or not mega events help brand a nation and/or government image remains an interesting and important issue, both academically and policy-wise. Applying Gwinner's model of image creation/transfer in event sponsorship as a frame of reference, and approaching the issue from a government public relations perspective, this investigation focuses on a substantial set of research questions and hypotheses.

This study explored China's image-building efforts through hosting such mega events as the 2008 Beijing Olympics, 2010 Shanghai Expo, and 2010 Guangzhou Asian Games. It has particularly addressed the questions of whether the event images could be transferred to that of the host country and government – a belief that many countries and governments seem to have harbored when bidding for and executing international mega events with huge public expenditures. While it is generally assumed that internationally oriented mega events target chiefly the international community for country's branding purpose, this study attempted to argue that they may also aim at the internal audience in order to legitimize the ruling regime and leadership, which is particularly so with authoritarian regimes such as the one in China. Therefore, the study was focused on measuring the image-building effects on China's domestic audiences. Though taking only on college students as the targets, this study has generated several academic and practical implications that may inspire future research in this area. First, mega and hallmark events images seem to transfer to that of the host country and government. This study has discovered that Chinese college students, including those from former western colonies, Hong Kong and Macau, expressed a strong inclination to link positive images of the mega events with that of the host country and, to less degree, government. This finding has somewhat supported Gwinner's assumption of image transfer between a mega event and the hosting country. Still, more research is needed to validate this analytical model and, particularly, to explain the existence of a different branding effect between the image of host country and the image of host government. Second, world-famous mega events are utilized not only to brand the host country's image abroad but also to promote the host government's image at home. This study demonstrated that the Beijing government, still an authoritarian regime, aimed its efforts at the Chinese people for the political objective of legitimizing the ruling regime and leadership. It has, however, suggested that the correlation between event image and likelihood of associating event image with host-country image was greater than with government image. Such a finding implies that when people experience the mega event, they really experience the host country more than the host government. Third, such inforgraphic variables as media consumption behaviors and sources of information prove significant in forging the positive association between mega-event images and that of the sponsoring country and government. They stand as influencing factors, proving useful in predicting audiences’ perceptions toward the events; hence the host country. This finding suggests that in transitional China, the government-controlled media continue to mobilize public support for the government-sponsored mega events. Also, the fact that Hong Kong people do not identify with the government-sponsored mega events as closely as mainland and Macau people shows that Hong Kong residents are the least receptive to the strong arguments featured in the government-controlled media. It should, however, be stressed that there exist difficulties to achieve a clear-cut distinction between government and social media and between government and commercial media in China, as social media may draw on and post articles from government media; and to be “commercial” does not free a given medium from government control. Fourth, individual's involvement in and participation at mega events stand out as the leading predicator of audiences’ positive evaluation on the events and the host country and government. The indication of high-involvement in the three mega events leading to the high-positivity in viewing the events in reference to the host country and government has somewhat supported the argument on public relations program planning – high involvement shall be one of the key goals. Fifth, it is also interesting to note that individual's emotional attachment to the host country, though not the leading predictor, proves to be an important one. This finding has further validated the marketing research assumption on the utility of persuasions in event/sponsor promotions. Finally, this study has expected limitations. Being a study of only three events in one country, the results cannot be generalized before being compared with other cases in other countries. Indeed, there is a need for multiple replications. In addition, convenience sampling was done in this study partly in light of growing difficulty in conducting surveys on politically sensitive issues in China. This study may stand only as a first step toward further research with wider representative samples (i.e. extending to Beijing, the capital and political center of the country) from more diverse audiences (i.e. going beyond college students). Moreover, the idea that the Chinese government intends to target the domestic audiences with mega events needs to be further substantiated. It would also be interesting to examine other factors that may shape the government rationale for sponsoring the mega events, including the power of domestic lobby and the fear of international communities about ramifications to contain a growing China from bidding to host the events.